360 degree view of the true face of Sanxingdui gold mask: craftsman has mastered polishing technology more than 3000 years ago

After more than 30 years, the excavation of Sanxingdui site's sacrificial area was restarted, which affected people's hearts. One of the most popular is a unique gold mask.

Compared with the gold masks unearthed in pits 1 and 2 of Sanxingdui site, the newly unearthed gold masks are particularly thick and distinctive.

It is understood that the newly excavated golden mask, though only half of it, has been very shocking.The half mask found is about 23 cm in width and 28 cm in height. It is very thick and can stand on its own without any support.

In the hands of experts, the buried gold foil unfolds slowly, and the golden face of the mask shows a little bit, which is very eye-catching.

According to the cultural protection personnel, the gold mask found this time is very thick, and its scale and volume are far more than others. The mask is well polished,After testing, its gold content is about 85%, silver content is about 13% to 14%, there are other impurities. At present, the cultural relic is undergoing preliminary restoration.

Ma yanru, a former research librarian of the National Museum of China, said,The reason why the mask looks golden is that in the gold and silver processing, it should be the last polishing. More than 3000 years ago, the craftsmen of gold and silver have mastered the hammering and polishing techniques very skillfully.

Previously, the gold mask of Shang and Zhou dynasties preserved in the Jinsha Site Museum is the largest gold mask of the same period found in China. 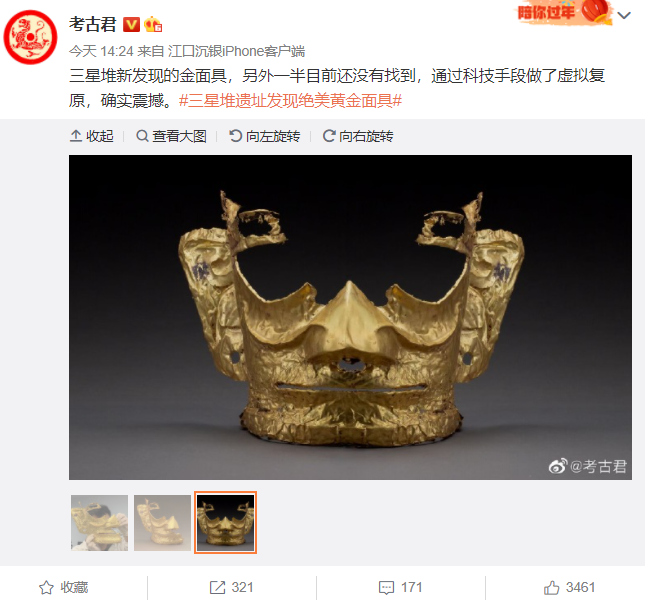