At present, the cloud game model is the field that many manufacturers scramble to set foot in in recent years, including Tencent, Netease, Microsoft and other manufacturers have launched their own cloud game products.

More and more manufacturers join the ranks of cloud games, which seems to indicate that cloud games will become one of the future trends of game development.

Recently, Tencent Aurora box 3pro cloud game customization was officially launched on e-commerce platforms such as jd.com and started to make an appointment,The price is 649 yuan, and you can enjoy a discount of 150 yuan if you participate in the first round, that is to say, only 499 yuan is needed.

It is reported that this customized TV box not only has the function of TV box, but also has built-in Tencent start cloud game, optimized game delay, and standard start Certified Wireless handle.

Through the built-in start cloud game, you can play many 3A games,Such as "nba2k OL2", "Boxer 14", "original God", "ancient sword three" and many other legitimate game resources, no need to install, click to play.

It is worth mentioning that the official made it clear that this Tencent Aurora box has no boot advertising.

At the same time, the customized model is also equipped with a wireless handle, which can be used continuously for 20 hours at full power.

It is understood that the start cloud game comes from Tencent's own cloud game platform, and the TV version was officially launched in December last year.

At present, it has supported mainstream models of TV brands including Hisense, Changhong, TCL, Skyworth and Xiaomi. 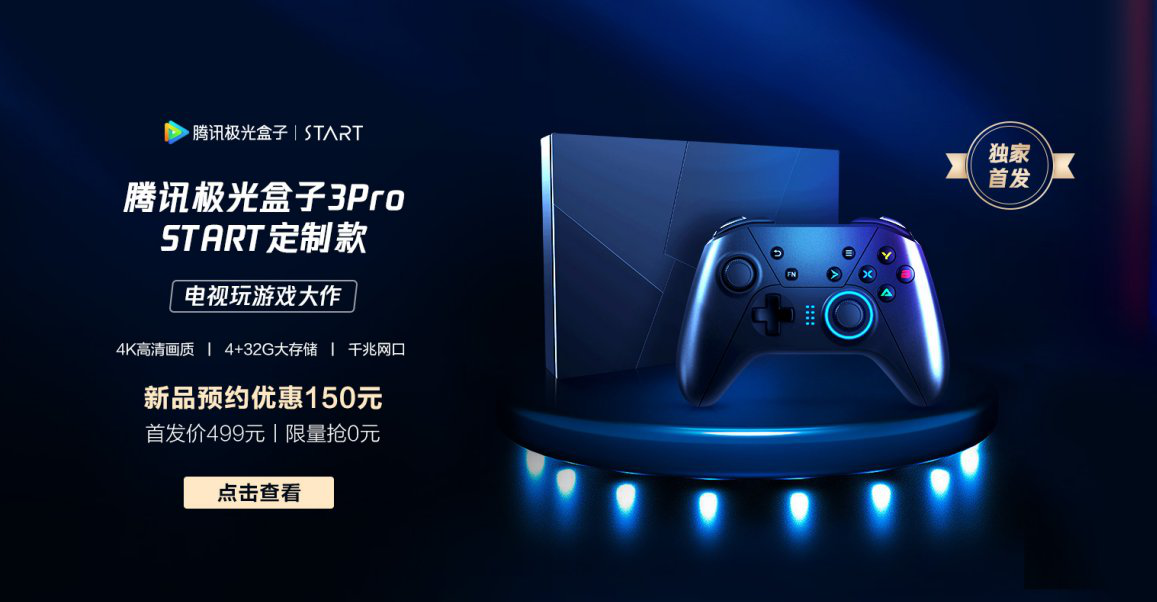 Related news
Huawei is developing a pilot plan to replace Android with the Russian Aurora operating system.
Dell releases Alienware Aurora sharp dragon mainframe: AMD returns after decades
Apple store added for you page: online shopping recommendation and iPhone model comparison (Figure)
You can play without a host! Tencent Aurora box 3pro cloud game launched: 499 yuan
Aurora CEO: we had a higher level of self driving ten years ago than Tesla now
Hot news this week
2021 Hurun self made list of the richest people under 40: 38 year old Zhang Yiming ranks first in China
Tencent Teana laboratory holds a cross boundary Seminar on artificial hearing technology: cochlear implant technology is undergoing cross boundary development
Dada's latest equity exposure: Jingdong is the major shareholder, and Kuai Jiaqi holds 7.8% of the shares
Shell equity exposure: Zuohui has 81% of the voting rights, and Tencent holds 5% of the shares of two shareholders, hillhood
For the first time in history! Sanxingdui "cornucopia" 3 pit successfully took out the complete round mouth square statue
Xiaomi donated to Tsinghua University to set up Xiaomi artificial intelligence Innovation Research Fund
Benchmarking Tesla semi? Geely responded to rumors of developing pure electric heavy truck: no comment
Spend another 20 billion dollars to buy nuance, where did Microsoft spend its ten-year "cash" capability?
With over 17 million number carrying users and 99% success rate in one hour, is it the best time to handle it?
Lenovo he Zhiqiang: the cumulative income exceeds US $500 million, Lenovo venture capital enters the payback period
The most popular news this week
It is reported that Lianfa technology will use 4nm technology to manufacture 5g mobile chips
Tesla hit a tree at high speed, two dead! Police: driving without driving
Hackers focus on virtual currency! A man was stolen more than 2 million yuan
Better than snapdragon 888! Samsung Galaxy Z fold 3 uses snapdragon 888 plus
Post-90s and post-95s become the main force of blind date: China's single population exceeds 200 million
Cryptocurrency crash Market: some people crazy cash out, the U.S. government to move
Not ppt! Take alpha s, Huawei's autopilot, and deliver the Huawei version within this year
1 billion US dollars, over 5000 R & D personnel! Huawei Wang Jun: Huawei Bu has no revenue target this year
Why is "Huawei automobile" known as the first automatic driving? Top executives reveal secrets in person
China's box office will exceed 20 billion in 2021: 5 films will exceed 1 billion. How many have you seen?