Tencent game, go to the crossroads 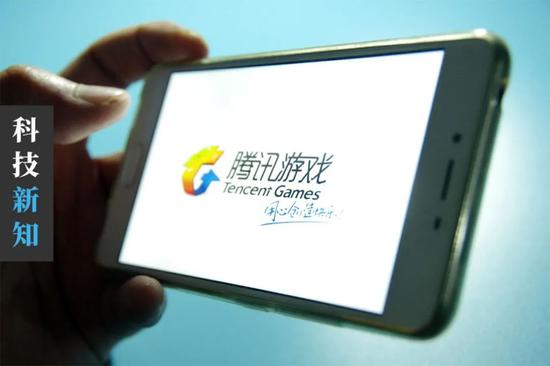 Among them, the contribution of new blood can not be ignored.

According to Qimai data, Tianya Mingyue Dao, which was launched on October 16 last year and was changed from the MMORPG end game of the same name of Aurora Borealis studio, only took more than ten hours to reach the top of the IOS free list and best-selling list.

According to the "report on mobile games in October 2020" released by Gamma data, Tianya mingyuedao's first month running water is more than 1.3 billion yuan, ranking fourth in the domestic mobile game running water list of that month after the glory of the king, the elite of peace and the original God.

However, Tencent's share price fell 2.81% in the first trading day after the financial report.

Today, with the main works of Tencent end game era to the climax, Tencent game is coming to the crossroads of the new and old. 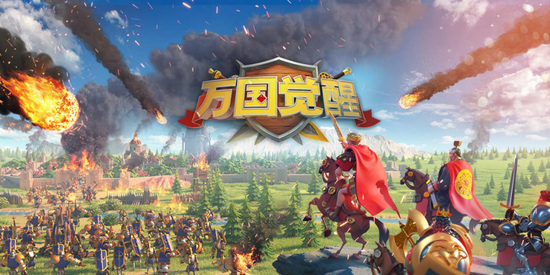 All kinds of signs show that the moat of Tencent empire is not absolutely solid.

On the new year's day of 2021, Huawei game center community announced that Tencent game unilaterally made major changes to the cooperation between the two sides at 17:57 on December 31, 2020 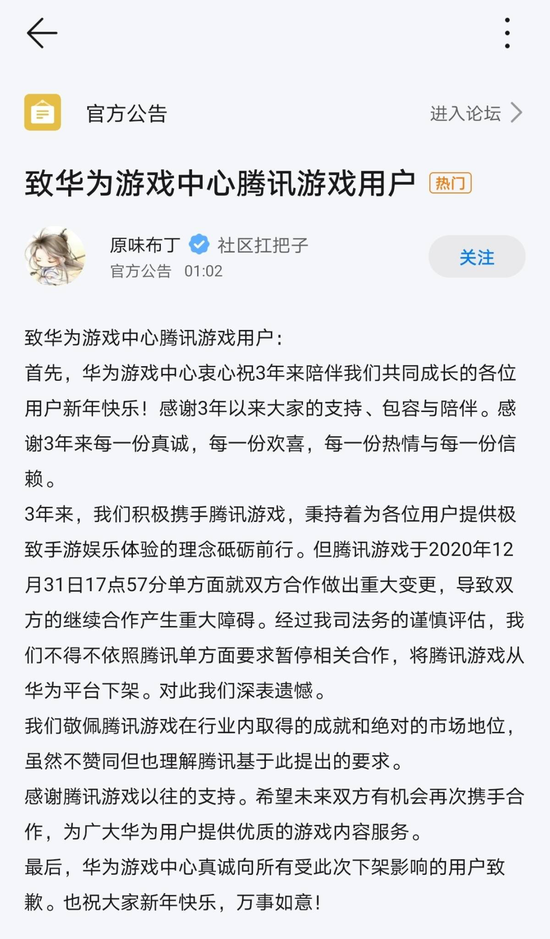 The war originated from Tencent's newly launched "codm" (call of duty mobile game), a well-known IP porting version of mobile game developed by Tianmei studio, which claims to improve the layout of Tencent's FPS (first person shooting game) matrix in which "peace elite" and "crossing the line of fire" last more than 30 minutes. Since its overseas release in October 2019, "codm" has been listed in the top download list of 148 countries in the world. 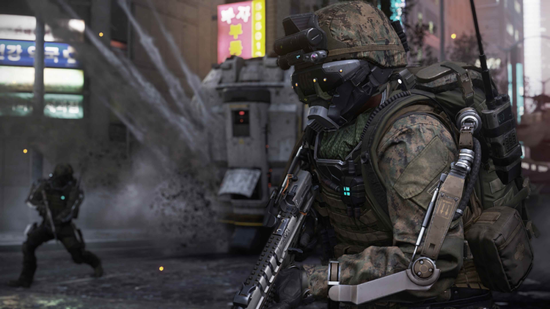 Behind the giant battle is the century war between domestic game manufacturers and Android mobile phone channels.

From Tencent's point of view, Tencent tries to rely on the strong performance of a single work overseas server to gain more bargaining power to the channel, so as to promote the integration of channel fees between China and foreign countries.

From the perspective of Android mobile phone manufacturers represented by Huawei, in 2020, two super mobile games will bypass Huawei channel and achieve great success, namely Lilith's "awakening of the world" and MIHA you's "original God". This means that with the mature supply of mobile game market and the improvement of players' requirements, mobile phone manufacturers no longer have the advantage of monopolizing the distribution of mobile games.

Take Xiaomi as an example. According to the financial report in 2020, the gross profit rate of Xiaomi's mobile phone increased, but only increased from 7.2% to 8.7% on a year-on-year basis. The core reason is that the proportion of high-end mobile phones increased, and ASP (average price) increased by 6.1% on a year-on-year basis. The gross profit rate of Xiaomi's Internet service business including game channel sub account and other content sub account decreased, but only decreased from 64.7% to 61.6%.

Behind this, mobile phone manufacturers shifted the low gross profit contradiction to the high profit mobile game industry by virtue of the early mobile game industry's information asymmetry, the user's cognition is not centralized, and the channel controls the download volume.

The current situation is that the mobile game market is changing from the incremental market to the stock market. In this process, the contrast between the channel side and the content side has changed significantly.

In the learning process of mobile game users, they often contact games from Android channels and marketing content, and slowly build up their cognition of boutique games in the process of trial play. In the era of incremental market, due to the immature market and insufficient content supply, the evaluation and word-of-mouth system of mobile games has not been established, and the bonus of new users is greater than that of core users.

The demonstration effect of Yuanshen's success is also accelerating the anxiety of the R & D side. MIHA you, the R & D company, revealed that the development cost of Yuanshen reached US $100 million. At the end of 2019, Liu Wei, CEO of MIHA you, said that for this reason, Yuanshen absorbed more than 400 R & D teams, while in the period of Collapse 3, the number was only about 60. According to the 2016 listing prospectus of mihayou, the average annual salary of the company's employees was 405500 yuan, which exceeded the average level of A-share game companies. 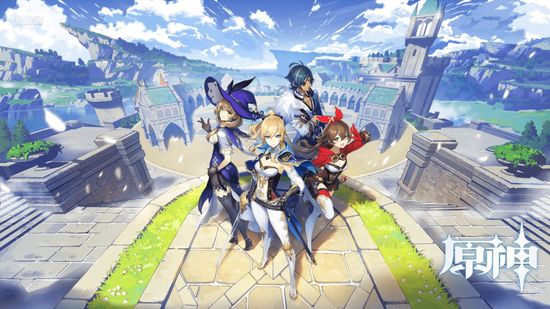 02 the crossroads of Tencent

The pressure of the stock age also acts on the mobile game giant Tencent.

In the war against Huawei, Tencent is regarded as the last hope of the game industry, because Tencent is not only the top game R & D party, distributor, but also the top channel party in China. Tencent, which has huge traffic channel chips such as wechat, QQ and applied treasure, is the only game giant with the strength to challenge the whole domestic Android Mobile Alliance. 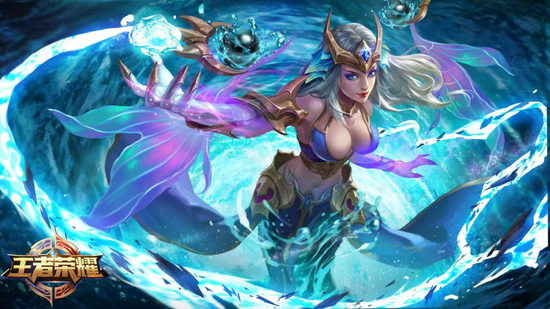 Tencent has to be the preferred publisher for the popular games in overseas markets when they enter the Chinese market. In the Internet forum, a game practitioner commented on Tencent's channel advantages as follows:

This strength is reflected in Tencent's strong control over overseas R & D companies. After 2010, there has been a wave of breaking the circle of MoBa works all over the world, including two S-class works, which are riot's League of heroes and value's turret 2. In the end, Tencent got the relatively weak League of heroes, and value finally chose to cooperate with the relatively weak agents in China to perfect the world.

The reason is that value focuses on its own platform steam, requiring Chinese players to have steam platform accounts, which obviously conflicts with Tencent's social account system. In 2017, Tencent also upgraded TGP (Tencent game platform) to webgame, launching direct competition with steam in PC game sales. 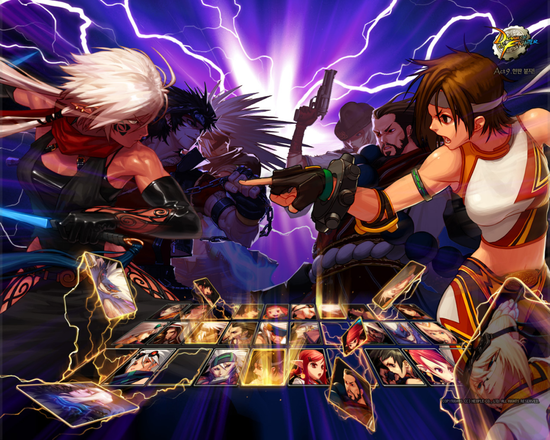 This means that Tencent will enter a new era of competition in the mobile game market after eating the old dividends. The characteristic of the new era is that the product logic goes beyond the channel logic. Although Tencent's strong agency ability and channel advantage still exist for the weak R & D companies, Tencent's agency advantage is weakening in front of the strong works of the strong R & D companies.

For example, since 2018, the number of twitch viewers of Fortress night has surpassed that of Jedi survival, while Tencent, the agent, has obviously insufficient operation and marketing efforts for fortress night. Some practitioners said that Tencent canceled certain publicity plans for "Fortress night" in order to make way for "survival of the Jedi".

After the popularity of Yuanshen, a large number of players discussed why Tencent can't make products like Yuanshen?

According to Zhu simaji, Tencent has more than 20 evaluation dimensions for game items, with a total time of 2-3 months. The main evaluation standard is profit level. Once the return performance of the works is poor, they will encounter the misfortune of stopping operation or reducing the rating. The rating reduction means that the program, art and marketing resources of the works will be reduced.

Compared with the R & D team of more than 400 people in MIHA tour and the company's all in one "original God" approach, Tencent IEG broke up the eight major studios into small studios under the four major studio groups of Tianmei, photon, Rubik's cube and aurora borealis in 2014, as well as the self research strategy committee. Ren Yuxin, the COO of Tencent, said in an internal letter that the purpose of organizational reform is to adapt to the mobile wave and improve efficiency.

A former Tencent game employee said that most Tencent's game projects have their own IP, and in the process of project review, such projects are more likely to get high ratings. In contrast, Yuanshen, which has no IP advantage, lacks competitiveness in the project stage under the Tencent system. Even if it is made, it will not have the present quality of the original God. 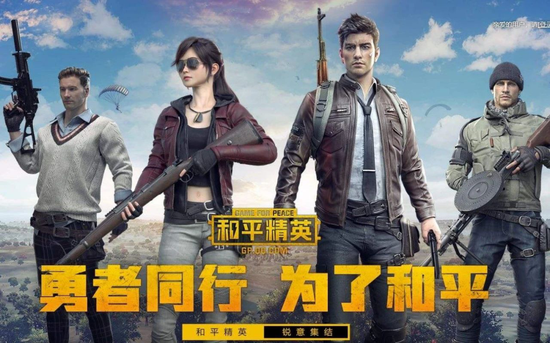 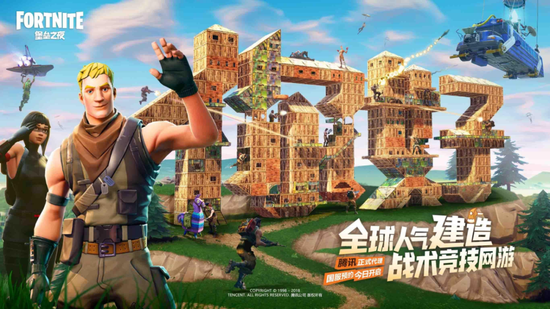 Standing at the crossroads of the incremental market turning to the stock market, Tencent also encountered the situation of declining market share. According to the report of China's game industry in 2020 issued by the game working committee, Tencent's game share in the domestic market decreased from 57.48% in 2015 to 47.34% in the first three quarters of 2020.

The weakening of the weight of the head is also one of the signs of the maturity of the content market. In the global game market, Sony, Microsoft and other giants have no more than 20% market share, while in China, Tencent once occupied more than 50% market share.

Now, this kind of ruling power is walking on a slow melting Road, and even Tencent itself does not avoid this point. James Mitchell, Tencent's chief strategy officer, was asked about the impact of the rise of Yuanshen in the third quarter of last year's earnings conference call

However, the new types of works with heavy self-development are difficult to produce under the existing Tencent studio architecture. For a long time, Tencent games like to fight a sure war rather than a tough one. To get out of the comfort zone, we need a whole set of architecture to adapt to the high-quality competition. For Tencent, which has long occupied the channel advantage, this is a new self revolution.

Related news
Tim Sweeney, founder of Epic Games - from a challenger in the game industry to a land protector
Hot news this week
2021 Hurun self made list of the richest people under 40: 38 year old Zhang Yiming ranks first in China
Tencent Teana laboratory holds a cross boundary Seminar on artificial hearing technology: cochlear implant technology is undergoing cross boundary development
Dada's latest equity exposure: Jingdong is the major shareholder, and Kuai Jiaqi holds 7.8% of the shares
Shell equity exposure: Zuohui has 81% of the voting rights, and Tencent holds 5% of the shares of two shareholders, hillhood
For the first time in history! Sanxingdui "cornucopia" 3 pit successfully took out the complete round mouth square statue
Xiaomi donated to Tsinghua University to set up Xiaomi artificial intelligence Innovation Research Fund
Benchmarking Tesla semi? Geely responded to rumors of developing pure electric heavy truck: no comment
With over 17 million number carrying users and 99% success rate in one hour, is it the best time to handle it?
Spend another 20 billion dollars to buy nuance, where did Microsoft spend its ten-year "cash" capability?
Lenovo he Zhiqiang: the cumulative income exceeds US $500 million, Lenovo venture capital enters the payback period
The most popular news this week
Cryptocurrency crash Market: some people crazy cash out, the U.S. government to move
Not ppt! Take alpha s, Huawei's autopilot, and deliver the Huawei version within this year
1 billion US dollars, over 5000 R & D personnel! Huawei Wang Jun: Huawei Bu has no revenue target this year
Why is "Huawei automobile" known as the first automatic driving? Top executives reveal secrets in person
China's box office will exceed 20 billion in 2021: 5 films will exceed 1 billion. How many have you seen?
The first battle of autopilot becomes famous! Huawei: auto R & D investment will reach 1 billion US dollars this year
The most powerful legal department is out! Nintendo suing switch host cracking team: claims nearly one million
After three times of sanctions, Huawei launched an all-round attack in nine directions
Mars willpower: who's blocking my Wi Fi!
April 19! NASA confirms the first flight time of the wit to Mars