Tiktok daily news, March 29th, "ktiktok board daily" reporter learned that the trembling voice Tencent unfair competition case ushered in the latest progress, according to the Fuzhou court of civil ruling, the voice has been withdrawn. Tencent had previously proposed to the court that the jurisdiction of the case should belong to the court where the agreement was signed in accordance with the wechat and QQ developer agreement. According to the subject matter of the case, the court decided to transfer the case to Shenzhen intermediate people's court for trial. (reporter Chen Mo) 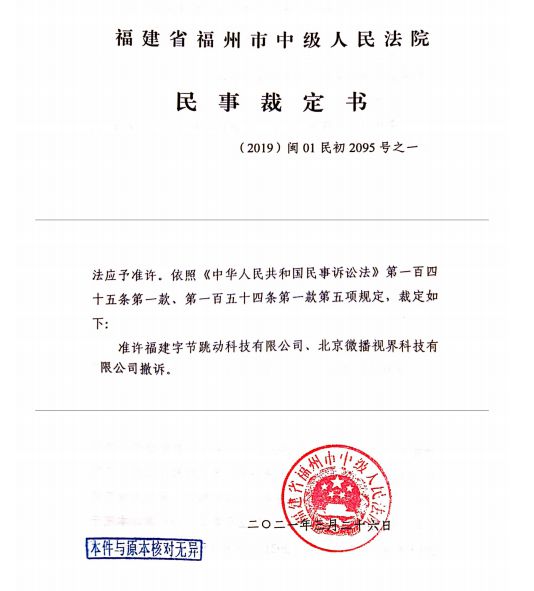 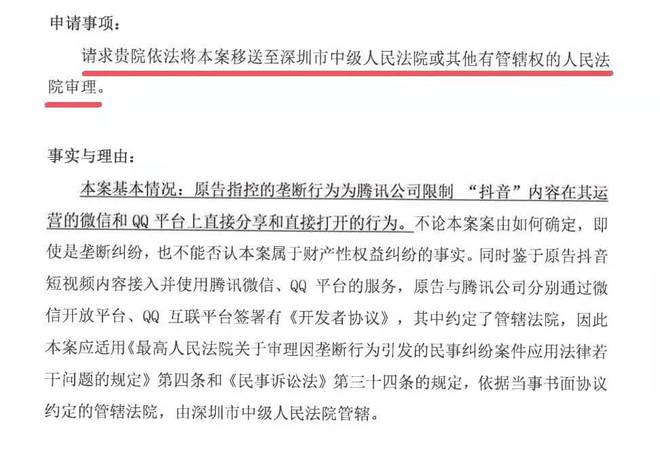 Tiktok filed a complaint against the court in February this year to prosecute the abuse of dominant market position and constitute a monopoly by Tencent. It requires the defendant to remove the restrictions that tiktok can not directly share and directly open on WeChat and QQ platforms. On February 7, the Beijing Intellectual Property Court officially filed a case. A month later, Tencent applied to the court for a jurisdictional objection, holding that no matter how the cause of the case is determined, even if it is a monopoly dispute, it can not deny the fact that the case belongs to a dispute over property rights and interests. According to the developer agreement of wechat open platform and QQ Internet platform, the case should be under the jurisdiction of Shenzhen intermediate people's court. 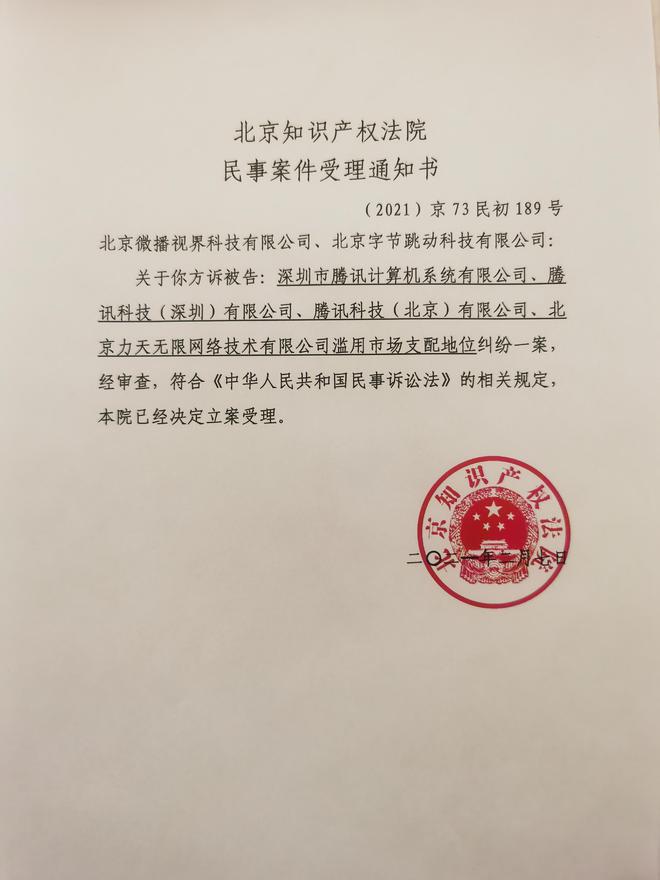 For this, the response is tiktok.

At present, the country is constantly strengthening the anti-monopoly and anti unfair competition law enforcement. We also hope that this lawsuit will help to clarify how platform economy regulates competition and improve anti-monopoly and anti unfair competition regulations. We are optimistic about the possible protracted litigation, because we are optimistic about justice and time, both of which are monopolies like Tencent that can never monopolize.

In February 2, 2021, tiktok filed a petition with the Beijing intellectual property court to prosecute Tencent monopoly.

Tencent responds to trembling charges: byte beating malicious tiktok will sue the other party for infringing the law.

In February 2, 2021, tiktok filed a petition with the Beijing intellectual property court to prosecute Tencent monopoly. Tiktok said that the relevant materials on the trembling prosecution were not received at present.

Tencent said its products follow the concept of fair competition and open cooperation to provide services for users and third-party products. The company's related accusations are totally untrue and malicious. Bytes of tiktok, including the jitter, get the WeChat users' personal information illegally and violate platform rules through various unfair competition methods, have been stopped by the court for many prohibitions. There are still many violations of the platform ecology and the rights and interests of users in China and other related companies. Tencent said it would continue to file a lawsuit.

Related news
Tiktok had another accident in the United States, and Zhang Yiming's globalization ushered in the wake of his dream
TikTok America sell Google?
Is it necessary for the United States to kill tiktok?
American youth: saving tiktok
Us tiktok network red switch to other platforms, but there is no perfect substitute
Interview with Gates: TikTok US data will be guaranteed by Microsoft
Oracle wants to buy TikTok but it's hard to say
Microsoft statement: byte beat rejects its offer for tiktok's US business
The complex logic behind tiktok Co., Ltd. and Oracle
Hot news this week
2021 Hurun self made list of the richest people under 40: 38 year old Zhang Yiming ranks first in China
Tencent Teana laboratory holds a cross boundary Seminar on artificial hearing technology: cochlear implant technology is undergoing cross boundary development
Dada's latest equity exposure: Jingdong is the major shareholder, and Kuai Jiaqi holds 7.8% of the shares
Shell equity exposure: Zuohui has 81% of the voting rights, and Tencent holds 5% of the shares of two shareholders, hillhood
For the first time in history! Sanxingdui "cornucopia" 3 pit successfully took out the complete round mouth square statue
Xiaomi donated to Tsinghua University to set up Xiaomi artificial intelligence Innovation Research Fund
Benchmarking Tesla semi? Geely responded to rumors of developing pure electric heavy truck: no comment
With over 17 million number carrying users and 99% success rate in one hour, is it the best time to handle it?
Spend another 20 billion dollars to buy nuance, where did Microsoft spend its ten-year "cash" capability?
Lenovo he Zhiqiang: the cumulative income exceeds US $500 million, Lenovo venture capital enters the payback period
The most popular news this week
Cryptocurrency crash Market: some people crazy cash out, the U.S. government to move
Not ppt! Take alpha s, Huawei's autopilot, and deliver the Huawei version within this year
1 billion US dollars, over 5000 R & D personnel! Huawei Wang Jun: Huawei Bu has no revenue target this year
Why is "Huawei automobile" known as the first automatic driving? Top executives reveal secrets in person
China's box office will exceed 20 billion in 2021: 5 films will exceed 1 billion. How many have you seen?
The first battle of autopilot becomes famous! Huawei: auto R & D investment will reach 1 billion US dollars this year
The most powerful legal department is out! Nintendo suing switch host cracking team: claims nearly one million
After three times of sanctions, Huawei launched an all-round attack in nine directions
Mars willpower: who's blocking my Wi Fi!
April 19! NASA confirms the first flight time of the wit to Mars