Sanxingdui archaeology post-90s: about half

The archaeological work of Sanxingdui is still going on, and in addition to all kinds of rare treasures, the archaeologists themselves are also worthy of attention, especially the post-90s have become the absolute main force.

For example, three bronze yuans have been found in pit 4. As of the 28th, two of them have been successfully extracted. These two precious cultural relics were independently extracted by the post-90s.

According to reports, the bronze yuan is similar to the jade yuan in shape. It is generally considered to be a ceremonial instrument, only the size of a palm.

Xu Danyang, an assistant librarian of Sichuan Academy of cultural relics and archaeology, was born in 1995. After graduating from the school of archaeology, culture and Museum of Peking University in 2020, he came directly to the archaeological site of Sanxingdui and was responsible for the excavation of the first pit 4. He worked on the platform for an average of four hours a day.

He said that it's normal to dig on one's stomach at present. In fact, it's OK. It's not very tired.

However, in order to protect cultural relics, when extracting, he must lie on the hanging excavation platform and concentrate his whole strength on his hands. Relying only on his wrists and fingers, the challenge is very big, because some cultural relics are well preserved, but some bodies have been rotten, leaving only fragile outlines. If he is careless, they will fall apart.

Zhou Shanshan, who was born in 1992, also joined the group. This is the first cultural relic she personally extracted from Sanxingdui, but she has eight years of archaeological experience. 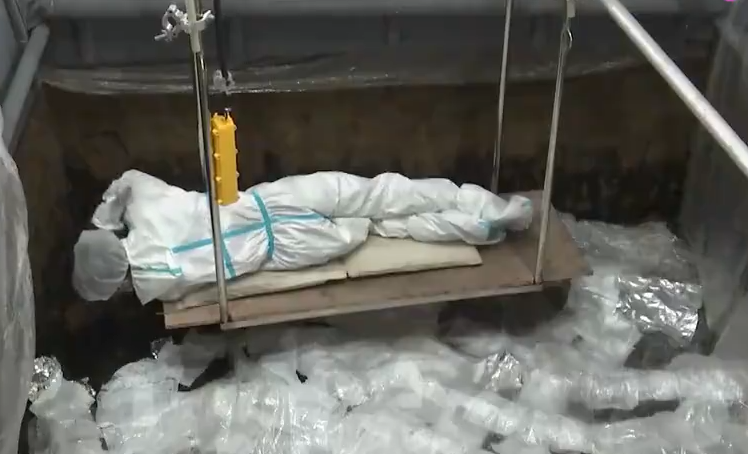 Related news
Sanxingdui cultural relics large face collision site: steering wheel, hot pot, Wi Fi antenna
Major archaeological discoveries at Sanxingdui site announced today! Unique gold mask still shining after thousands of years
360 degree view of the true face of Sanxingdui gold mask: craftsman has mastered polishing technology more than 3000 years ago
Silk relics unearthed more than 3000 years ago
Sanxingdui gold mask found eyebrow bone and ear holes, eyebrows are also hollowed out: netizens lament the exquisite craftsmanship of the ancients
More than 120 ivory unearthed from the sacrificial pit of Sanxingdui
Sanxingdui archaeology post-90s: about half
Why is it 30 years since Sanxingdui was launched?
What is the story behind the mysterious gold mask of Sanxingdui? Experts' detailed interpretation
New discovery of Sanxingdui! Nearly 60 pieces of golden leaves
Hot news this week
The company announced the shipment data of 2021 Q1: the proportion of Huawei fell to the sixth place in the world at 4%
Huawei Hongmeng cross border stir financial industry, many banks and insurance institutions enter, so much imagination!
Many mobile phone users make complaints about 5G Zhang Guoquan: all mobile phones in China open 5G SA by default.
Sony's third generation noise reduction experience: comparable to the strongest combat power of real wireless noise reduction headphones
The most flagship Huawei watch is back! Huawei watch 3 Evaluation: full marks of harmonic OS function and endurance
News said the ipad Mini and iPad 10.2 ushered in a new design: Apple's latest launch before the end of the year
IPhone 13 Pro comes with the same model! Xiaomi 12 information exposure: equipped with ltpo adaptive high swipe screen
At 19:00 on June 9, Ma Weidu and Mai Jingdong enjoy a 50% discount on books purchased in the live studio of Shusheng shushuo
Henan satellite TV "Dragon Boat Festival wonderful tour" full version popular all over the network: netizens call content amazing
New people to do "new" business: preparing for the battle with Zhang Ying, a peach farmer in Yangshan
The most popular news this week
Experts say that the intention of returning to the team is not obvious: when will the elephants go home?
Accidentally, the second-hand iPad I bought on a certain platform overturned
QQ new expression "big dish Wang" dominates the screen: no matter how big the mobile phone screen is, it will never be blurred
Real book official announcement: a bit of apple flavor
Fluorite releases RK2 pro, a child care robot: can run and shake hands
Buy a Hedwig in Jingdong and you can enter Hogwarts? Jingdong 618 takes you to explore!
"To prevent brake failure, please overtake first"! Buick car stickers at the end of the car, but Tesla owners are crazy to leave the car
Microsoft colorful mouse camouflage layout reward: 179 yuan, 12 months for a battery
Jingdong 618 hard core E-sports good things straight down also enjoy super long interest free rush on the right
The red envelope returned by the couple after breaking up was rejected Court: wechat red envelope is a gift, not returned