What will Apple Store change in the future after 20 years of operation?

Landmark building is the name card and symbol of a city.

Just as Tiananmen Square is to Beijing, Eiffel Tower is to Paris and Tokyo Tower is to Tokyo, seeing it evokes many people's memory and impression of this city or country. 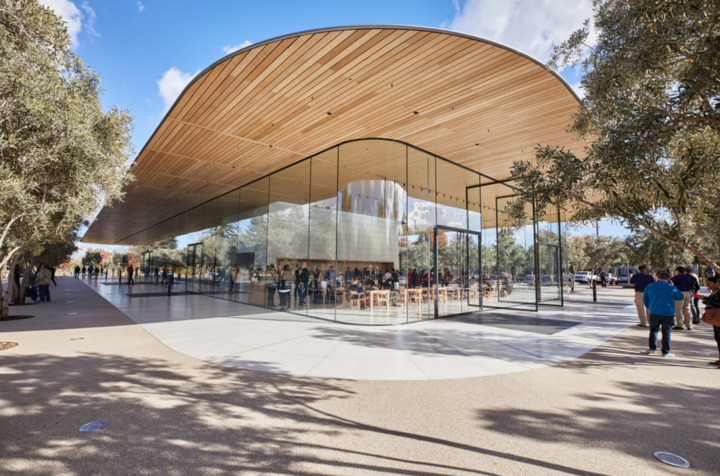 The visitor center of Apple park

For Apple fans, the iconic buildings in their hearts should be Apple Park and Apple stores located in various cities.

Whenever a new Apple store opens, many fans will get up early to participate in the opening ceremony of the new store to feel the baptism of the culture of the special brand direct store. As for those fans who can't get to the scene, they will also use FaceTime to participate. 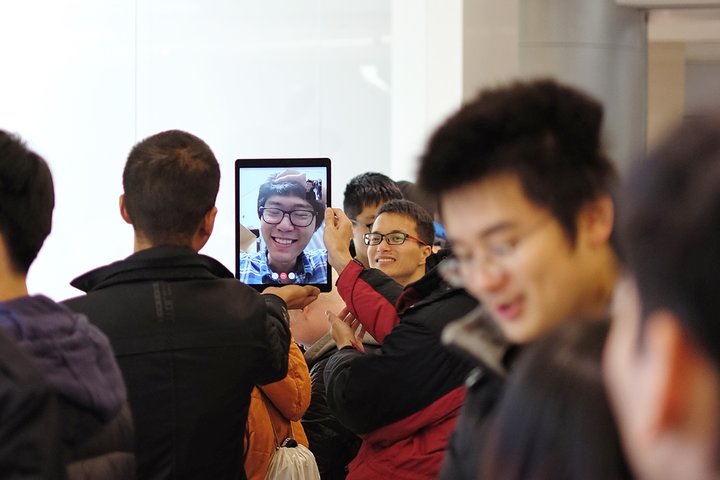 Strictly speaking, I'm not a fan of the brand, but when the apple store opened in Chaoyang Joy City, you saw a raised iPad screen full of happy smile and active atmosphere. It's hard for you not to be infected, and you would "do as the Romans do" to high five with specialists and genius. 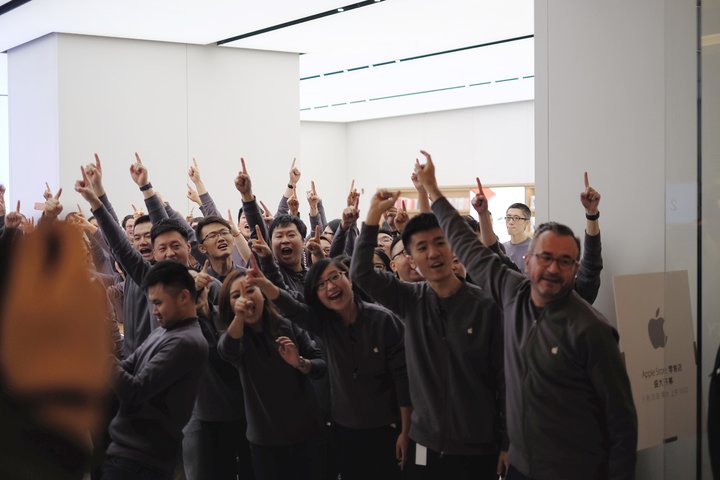 A few years ago, Apple store expanded wildly in the mainland, almost all over the major cities along the eastern coast. However, as the company continued to expand to the northwest and southwest, it suddenly stopped, and the upcoming Wuhan Apple store was also pressed the pause button.

In the follow-up, Apple's retail business executives changed, and the overall direction also changed. That is, since 2018, the number of global Apple stores has basically stabilized at about 510. As a comparison, there were 490 in 2016 and 499 in 2017, and the pace of expansion has gradually slowed down.

The global retail industry will be greatly impacted by the black swan epidemic in early 2020, and Apple store is no exception. Until recently, as the epidemic became clear, all Apple stores in the United States were open to welcome customers.

Will the "store in store" jointly launched by target department store be promoted to the whole world?

In order to alleviate the impact of the epidemic, Apple has rarely joined hands with target department store to set up "store in store" in 17 target stores across the United States, which is called mini Apple store. This is not an authorized store model, but is similar to the direct sales model of Apple store. In form, it is similar to the chain cosmetics stores of traditional supermarkets. 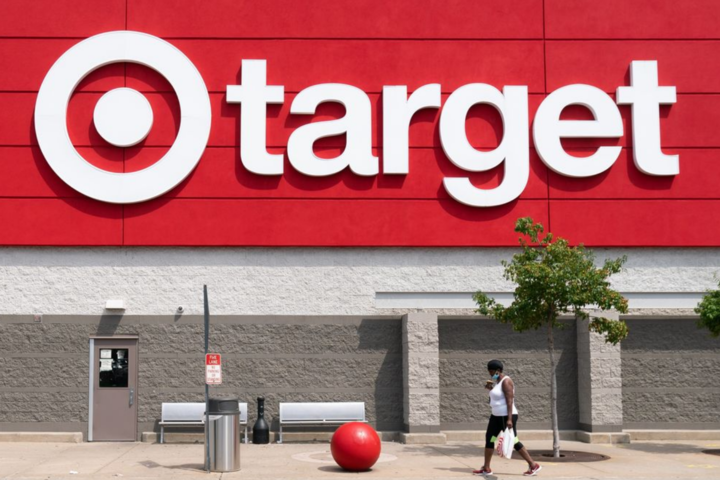 These mini Apple stores will adopt new displays and lights, and will have a design style different from that of traditional stores. In short, although the store is small, it must be consistent with Apple's style.

The mini Apple store in target is mainly used to display new products, including new iPhone, iPad, apple watch, etc. The internal employees are provided by target, but they will receive Apple's training on products before taking up their posts, so they can be regarded as taking up their posts with certificates.

However, the mini Apple store will not provide after-sales and training services. These services will only exist in the apple store. 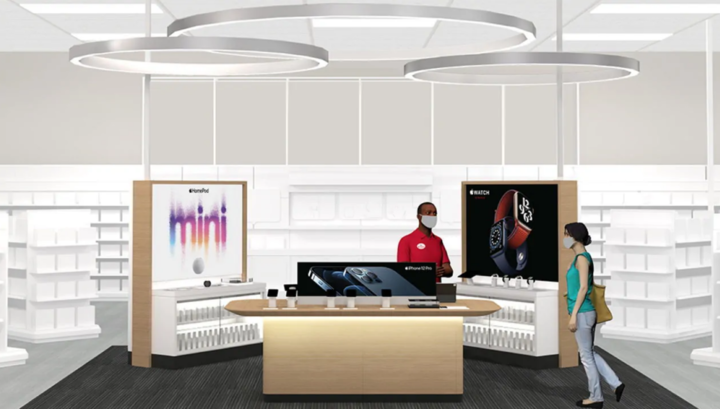 The purpose of mini Apple store is very clear, that is to let Apple products reach more people, let them feel the charm of Apple products, and achieve sales.

Previously, there have been many examples of store in store models like target, such as Disney, ulta beauty and Levi Strauss. This kind of store helps to attract and retain more customers for traditional department stores such as target, and is more in line with the concept of "providing one-stop shopping".

But at present, the mini Apple store in target is more like an attempt for apple, and it is difficult to bring obvious changes to Apple's retail business. After all, apple already has direct stores like the apple store and a large number of third-party licensors at this stage. Apple's approach is a new attempt to retail business. If the effect is considerable, it may be promoted soon.

It's like making the IRP program (independent maintenance service provider) plan that Apple started in 2019. By the end of 2020, IRP will have come to us.

Apple store is also an important part of Apple ecology

In addition to the expansion of new channels and new forms, Apple store has been constantly changing and trying in recent years.

For us, the apple store is more of a store that provides pre-sales and after-sales services and has a unified design style. It may not be as important to Apple as the iPhone, iPad and MAC. In fact, the apple store plays an important role in the apple ecosystem. 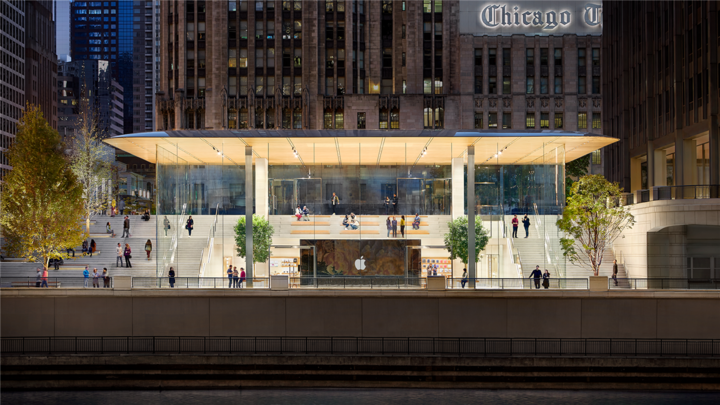 Apple store on the Chicago River

Secondly, in recent years, the proportion of direct sales of Apple products has increased year by year, which is directly related to the services brought by Apple store, especially to the promotion of wearable business products, such as apple watch, airpods, etc. Under the influence of the epidemic in 2020, store closures will have a certain impact on the sales of Apple watch and airpods. 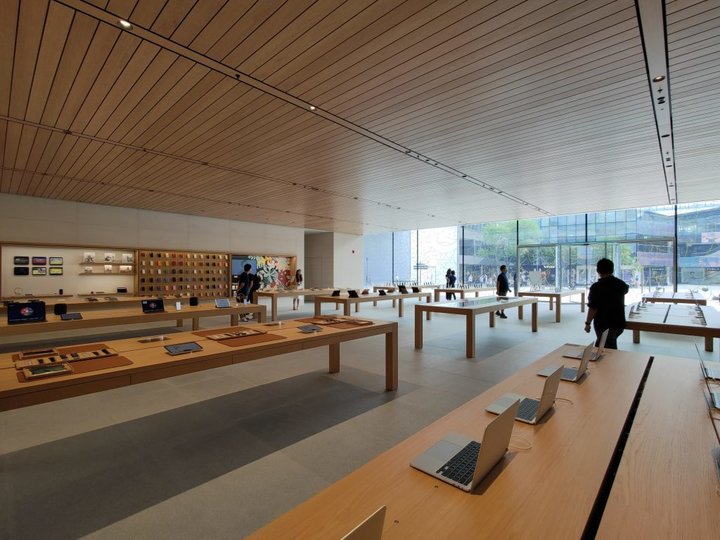 For this reason, cook mentioned in the conference call in the third quarter of 2020 that after the closure of the apple store, the impact of Apple watch will be greater, because people can't go to the physical store to try on the watch and can't match the watch strap according to their preference. "Therefore, I think with the closure of stores, there will be more pressure on this aspect. 」

Three stages of Apple Store from simplicity to complexity

May 19 this year will mark the 20th anniversary of the establishment of the apple store. Twenty years ago, apple opened its first retail store in Virginia. At that time, Steve Jobs introduced the apple store to the outside world through video.

At that time, Apple store had no fixed cash register as it does now, which was very different from the traditional department stores at that time. Apple wants to let the public directly touch and see Apple's products and preach for its products and culture through the apple store. To put it more simply, it is to bring Apple products to the masses so that people can see what Apple products can do. 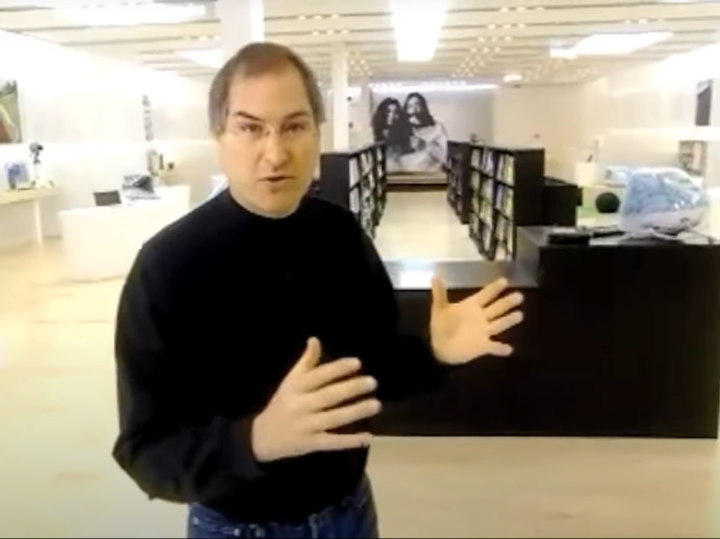 With the continuous expansion, today's apple store has 510 stores in 25 countries and regions, and this number may continue to grow, but it may not be as fast as before, and the direction may change a little.

Subsequently, Apple's product line has been constantly enriched, and the apple store has become the simplest way for us to experience Apple's latest products, and so far. From 2010 to 2015, the number of Apple Devices activated increased by 530 million in five years.

Apple's number of users and devices are constantly refreshing records. The function of Apple store is not only to experience products and show them to the outside world, but also to add many after-sales parts, including customer service and product support. Over the next five years, the number of devices activated by Apple increased by another 400 million. 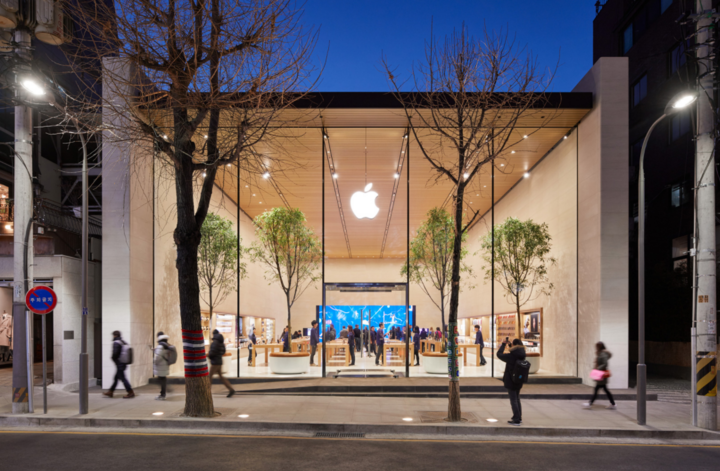 The first Apple store in Seoul

At present, there are about 1 billion Apple users in the world, but on the other hand, nearly 87% of the people in the world have not used Apple products. The goal of Apple's retail business is to make Apple's products interact with these people, and the apple store is the most important part. It shows the brand culture to the outside world and shapes the first impression of ordinary people on apple.

The future of Apple Store lies in people

In the past few years, Apple store has set off a wave of stores in "new frontline" and "quasi frontline" cities, and has been expanding. However, with the adjustment of Apple store policy, the "sinking" approach has stopped. The expansion of the number of stores will bring a lot of risks in rent, staff and logistics. In the three years of 2018, 2019 and 2020, the number of Apple stores has stabilized at 510, and there is no longer a crazy way to open stores. 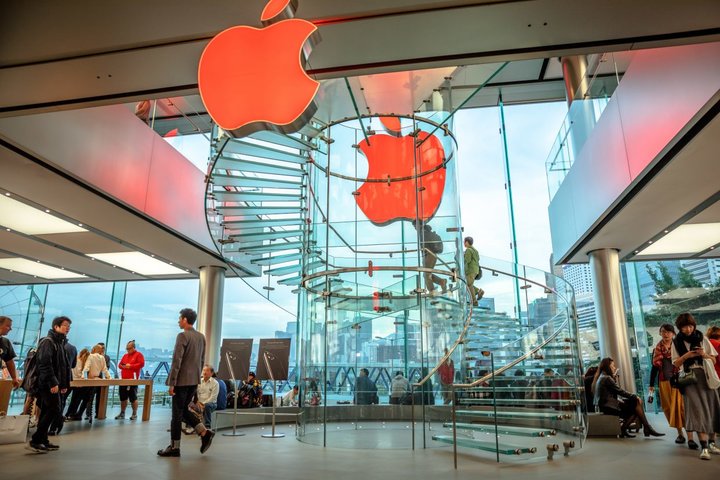 On the contrary, apple cooperates more and more frequently with third-party retailers, such as mini Apple store in target, IRP program, etc. Compared with increasing the number of Apple stores and relying on the third-party retail partnership, apple can establish more ties with customers in the second and third tier cities, and at the same time, it does not have to worry about the risks brought by running its own stores. 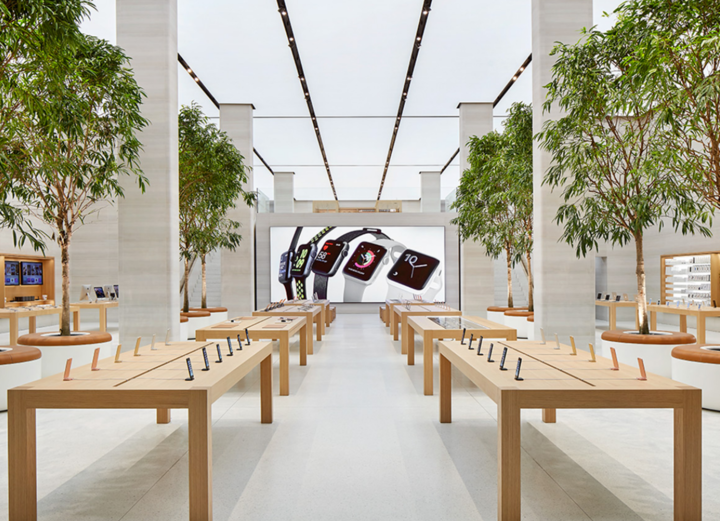 At the same time, with her working experience in Burberry and her sense of high-end fashion, arenz bet on the city rather than the country. Apple began to select the location of the new Apple store, and gradually focused on the top cities that Apple has not yet touched. After all, upward mobility to big cities is a major socio-economic trend.

Even after leaving apple in 2019, Apple has not stopped its strategy of "opening stores in top cities", such as the opening of Apple store in Singapore and the second apple store in Seoul last year. 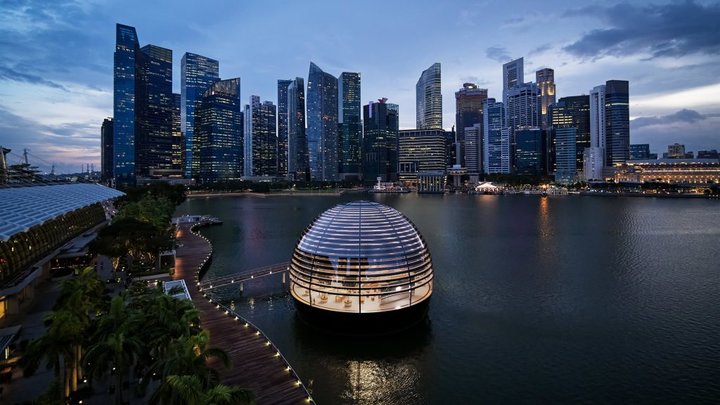 In the future, Apple store may not make significant improvements in design, appearance and region, but it will evolve with future products in terms of retail concept, in line with the current sales trend and technology trend. It can be predicted that after the launch of Apple's ar glasses, the services provided by Apple store will fully embrace ar. at that time, Apple store may be the best place to experience AR technology in advance.

Related news
This Apple Store was formerly a library with a history of hundreds of years.
Look at the Centennial History of the Library's "Transforming" Apple Store
What will Apple Store change in the future after 20 years of operation?
Hot news this week
Monkey acne cases have ranked first in the world that the United States has announced the emergency state of public health
Credit card points rule intensive adjustment online transaction points more "valuable"
High reserves and low cost experts: calcium ion batteries replace lithium batteries to stand up to the daily
Alibaba executives interpret financial results: the focus of the consumer side is no longer to attract new, but to do a good job in stratified operation
Losses in a single quarter of $ 23.4 billion a record, SoftBank did not carry the plunge of technology stocks and the devaluation of the yen
The prevention and control of the American Monkey epidemic has failed. What should I pay attention to?
Sources say Samsung's Galaxy Z Fold4 is going up in price: a 512GB top unit will cost more than 13,000
Is the micro -business headache? WeChat friends are suspected to have a big move: 7 can only be posted a week
Kuaishou launched a self-developed cloud intelligent video processing chip: The chip has been streamed successfully
The new product of Xiaomi MIX is coming: both internal and external dual -screen has been upgraded to make up for the previous generation.
The most popular news this week
Zte launches 5G smart helmet: Support voice control, gas detection and other functions
Meizu application Flyme Auto trademark: flyme is really going to get on the car
Do you get enough sleep every day? Girls get the worst of it: Put down your phone
Baidu account online rename function: those unbearable network names can finally be replaced
The outstanding student secretary went behind the scenes and Gree successfully registered the trademark of "Pearl Feather Child"
Ali's largest shareholder sells 34.5 billion US dollars: completely losing the board seat
Meizu Pandaer Great: All products are reduced by 200 and 30 -containing mobile phone cases, heat dissipation back clamps
Domestic brands killed 5999 yuan folding screen phones this year bucked the trend: up 73%
Xiaomi House clerk was exposed to the official response of customers' mobile phone consumption
The laptop is almost burnt by the fire, but the hard disk data can be restored 500GB per day