Why do I suggest you switch to Apple Music 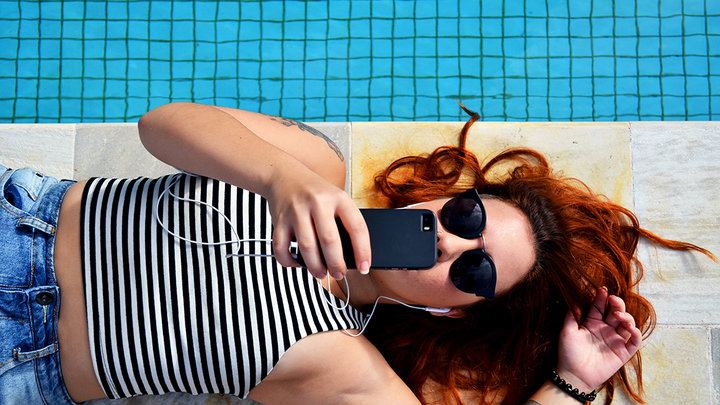 "Find the purity and love of listening to music at first. 」

A few weeks ago, I spontaneously formed a family team and used Apple Music for the first time.

"It's as if the music has become a colorful song that you never notice. 」

At that time, the drums were like beating on the heart of the listener, deafening.

Suddenly found that the original song should be so good. 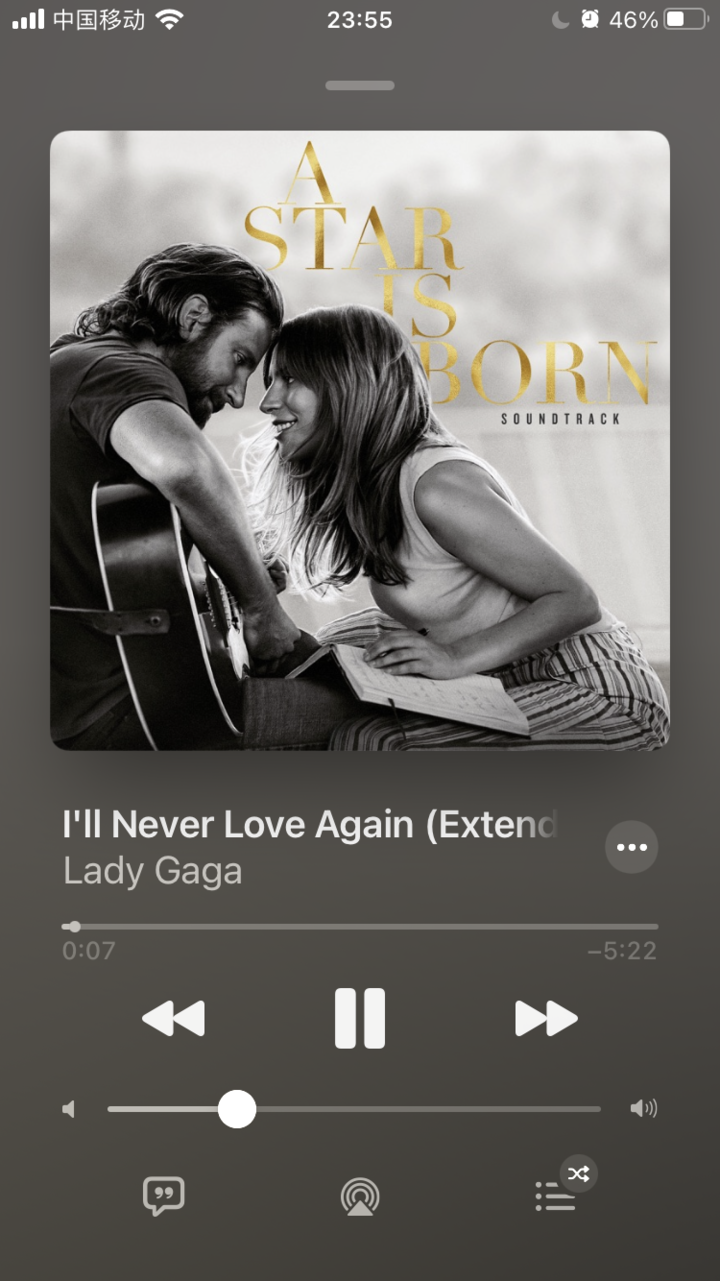 Before this song gives the person's good impression mainly establishes in singer's eloquent moving sound line. But after listening to the version of Apple Music, I suddenly found that there are so many musical instruments in the background, which have played such a great role in setting off the atmosphere of songs.

It turns out that in Lady Gaga's weeping voice, the drums are so harmonious and integrated. In particular, a few heavy drumbeats, each blow is like a loss of love into the heart of the listener.

In order to verify this feeling, the version of Netease cloud was listened to carefully afterwards.

Accompaniment gives people an intuitive feeling that they can hear it, but the sense of existence is not strong, not clear, and there is no focus.

What's more, the first drum at 1:50 of this version doesn't feel as shocking and powerful as apple music, and the subsequent heavy drums exist as a foil for lady gaga. In the song, the voice line of Lady Gaga is the most important, main and outstanding part. 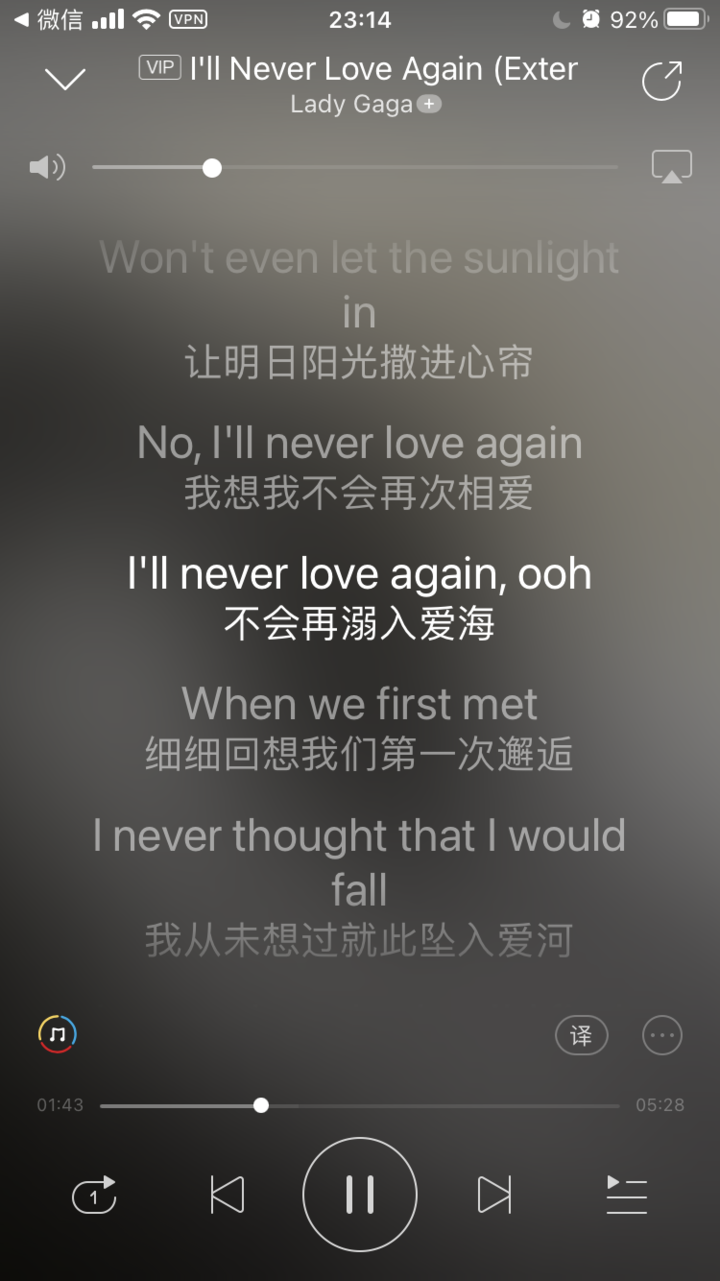 However, in the process of listening to the music, I feel that Apple Music thinks that accompaniment is as important as human voice. In some silent moments, the soundtrack may even dominate for a short time, while in the chorus, the voice and the drum are basically equal.

It has to be said that in this way, Lady Gaga's mellow and powerful voice is well supported by the steady and heavy drum sound. They complement each other and achieve each other. There is an experience of beauty in each.

It's not that Netease cloud's handling method of highlighting human voice is not good, but compared with Apple Music, the effect of Netease cloud is a bit inferior.

Among the songs of other styles, I have also selected some songs with different styles, such as yellow from Coldplay, the theme song young and beautiful from the movie the Great Gatsby, and never be the same from Camila.

These songs show different feelings from the domestic music app to different degrees, making people have a refreshing experience. 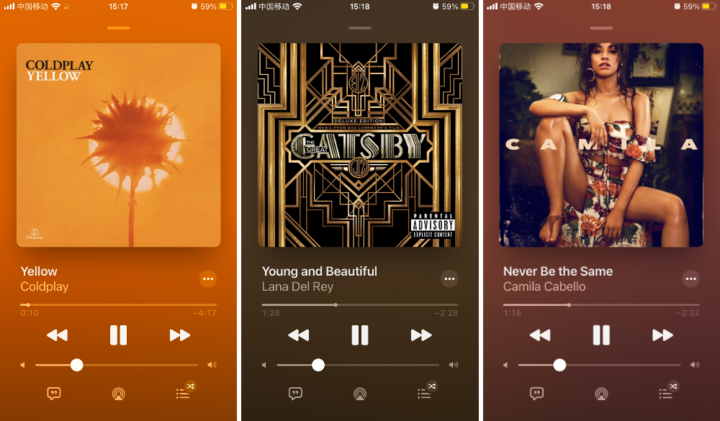 Yellow, young and beautiful, never be the same

Listening to music with other music apps is like bathing in the rain. Except for the huge rain, it's hard to detect other subtle sounds. But with Apple Music, it's like walking in the jungle after the rain. With the rain ticking, insects chirping and birds chirping, all the sounds are integrated, one after another, creating a better, clearer and more refreshing experience.

This sense of hierarchy and atmosphere reached its peak in Camila's never be the same. This song is accompanied by a variety of instruments, with strong rhythm and changeable sound effects. Apple music perfectly expresses Camila's voice changes, psychedelic, lazy and charming.

You can also feel the difference between Netease cloud and apple music when you put on headphones at the chorus of about 1 minute. The former's songs are flat and horizontal changes, while the latter are three-dimensional and deep changes.

If you want to say that Netease cloud is a 2D Gaode map, and apple music is a 4D Chongqing road.

To sum up, I never thought this song would be better.

2. The interface is simple and fresh

"No advertisement, no screen, no bullet screen, no name, long song list, it's over. 」 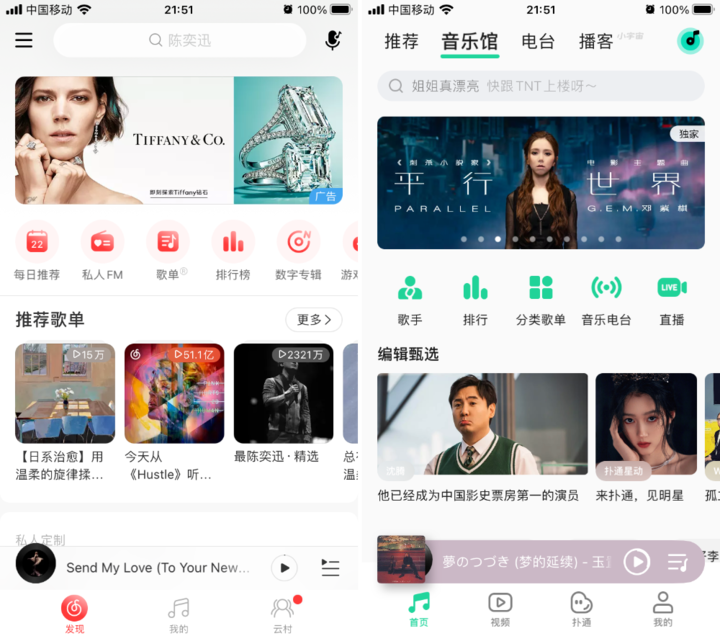 One of the reasons why QQ music has been criticized by the party is that it has too many functions. 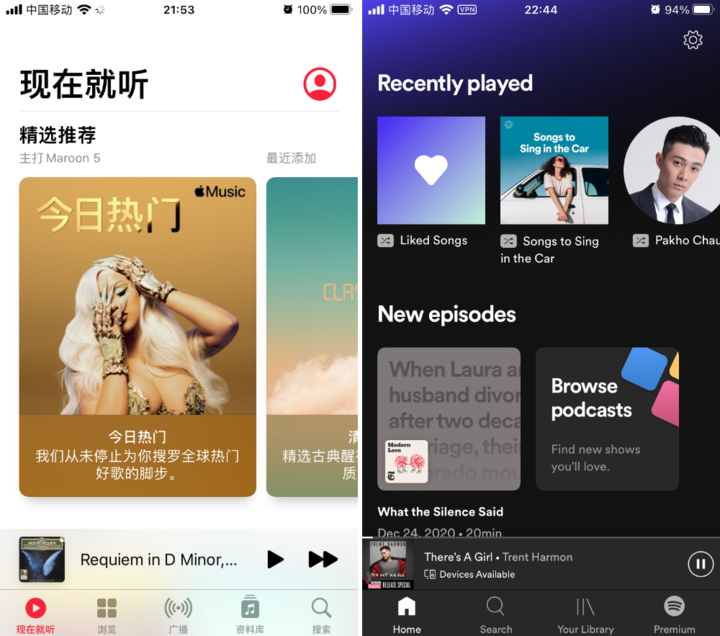 After seeing many music apps full of information in China, Apple Music's cover, song list name and song list pictures are so simple that they can be described as "crude". 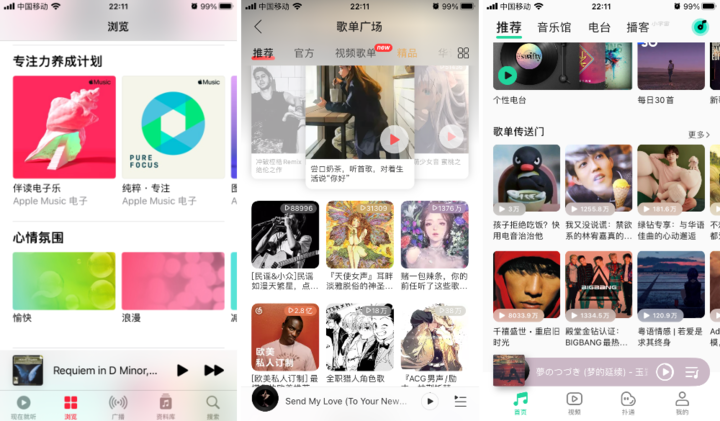 The pictures are from Apple Music, Netease cloud music and QQ music

3. It is highly integrated with the original ecosystem of IOS, and Android can also be used

Apple music is also available for download on Android phones, so there is no loss of songs after changing the system.

In addition, to find Siri to play a song, no longer need to say a long string of "Hey Siri, open Netease cloud music / QQ music to play sugar". Just say "Hey Siri, play sugar" to Siri. Even in the lock screen interface, the song can be played successfully.

You can also say "play fitness songs" to Siri at the beginning of fitness, and Siri will automatically open Apple Music and play related songs. 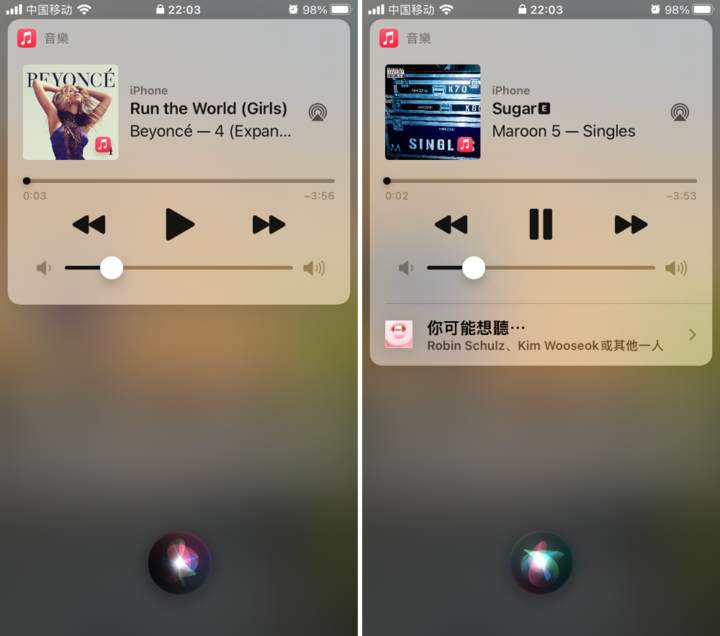 Siri calls out the interface

4. The cost is very close to the people

"Just forward this articleFind 5 friends to get on the bus, can not only contact feelings, but also 30 yuan to listen. 」

Family members can share Apple Music membership. It's 180 yuan for six people a year, and it's only 30 yuan for one person. Is there anything more fragrant? The student's monthly fee is even as low as 5 yuan. 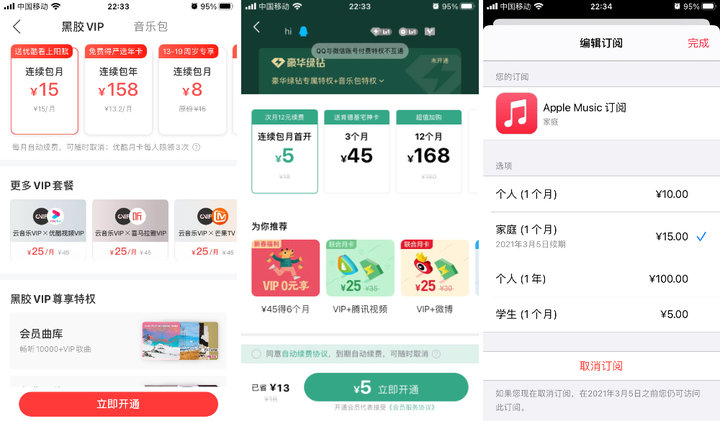 However, after interviewing two friends, I came to the conclusion that if Apple Music wants to gain a share in the Chinese market, it still has a long way to go in terms of localization.

Z admitted that he chose the music app mainly to see whether it has enough Japanese songs, especially the op (opening) and ED (ending) of animation.

Take the theme song "Magic Baby" which readers are familiar with as an example, in two domestic apps, there are original versions of Matsumoto's singing.

Apple music, on the other hand, has only the version that Cao sang in 2015.

For people who fall in love with a song because of an animation, the difference of singers will make the song sound "senseless".

After using Apple Music for a period of time, he said that he would take Apple Music as a supplement. The main force of listening to songs is QQ music, because "songs are more familiar, music library is rich, and lyrics translation is provided.". 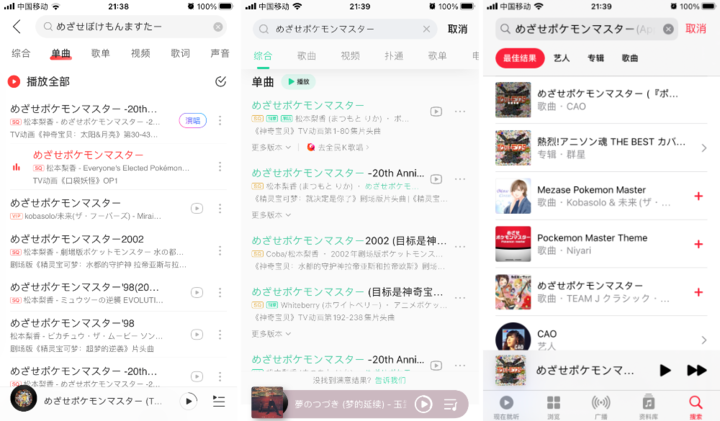 Because I like to watch variety shows, C has its own preference for some songs covered in variety shows. She is not very interested in the original song, and prefers to listen to the new interpretation of classic songs by different singers.

Take the recently popular variety show "creative camp 2021" as an example, among the three music apps, QQ music has the most copyright, and almost all live versions of songs can be found. Netease cloud music basically only has cover songs, and apple music is "Cha Wu Song".

So Apple music was never her choice. 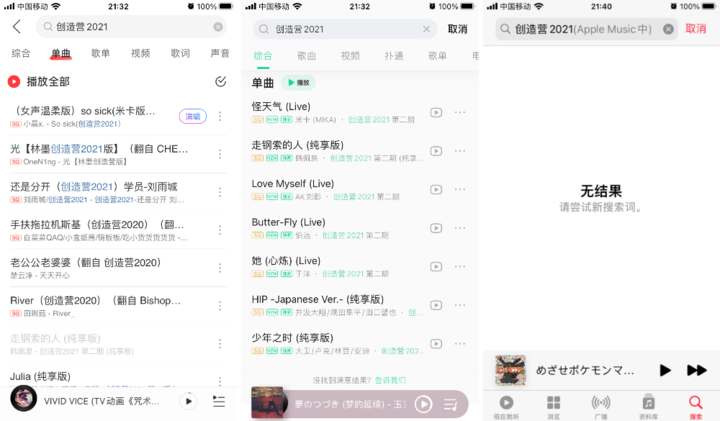 In addition, the occasional slow loading is also one of the obstacles for Apple music to fully integrate into the Chinese market.

In general, apple music, as a developing native app for IOS, still has a lot to improve. For example, it can't adjust the font size of lyrics, some songs don't have rolling lyrics, and there are not many songs with less audience, such as minority singers, songs and cover songs, and song versions are less.

However, apple music, which is cheap and easy to use, with excellent sound quality and fresh interface, is still a potential stock worth starting.

Moreover, as an ordinary audience who prefers European and American songs, after dealing with the overwhelming information in the Internet and life, it may be the most pleasant and private time of the day to open Apple Music and choose a song list called "pure focus" to listen quietly.

Moving to Apple music may be one of my most successful attempts in electronics this year.