Recently,The number of fans of Huawei Jingdong's self operated official flagship store officially broke through the 50 million mark, becoming the first brand with more than 50 million fans in Jingdong.

In order to thank the fans for their support, Huawei's flagship mobile phone products such as mate x2 folding screen and mate 40 pro, and wearable products such as watch GT2 and freebuses Pro are selling well in Huawei Jingdong's official flagship store. At the same time, Huawei's new smart screen series products have been opened for appointment on April 1.

Pollens can also enjoy activities such as paying attention to the store to win watch GT2, giving a high subsidy of 350 yuan to replace the old with the new, drawing a good gift with 0 yuan of membership points, etc., as well as service Thanksgiving season benefits such as 20% off for maintenance and 79 yuan for battery replacement.

At present, Huawei's all scene products are sold on the platform of Jingdong. Only on November 11 last year, the turnover of Huawei mate 40 series mobile phones in Jingdong exceeded 100 million in 7 seconds.

In 2021, Huawei's annual flagship new mate x2 folding screen mobile phone and its new mate 40e will be launched simultaneously in JD. According to the page of Jingdong, after Huawei mate x2 went online on the platform, the number of appointments quickly exceeded one million, and the first batch of goods were sold out in seconds, which was unprecedented in popularity. 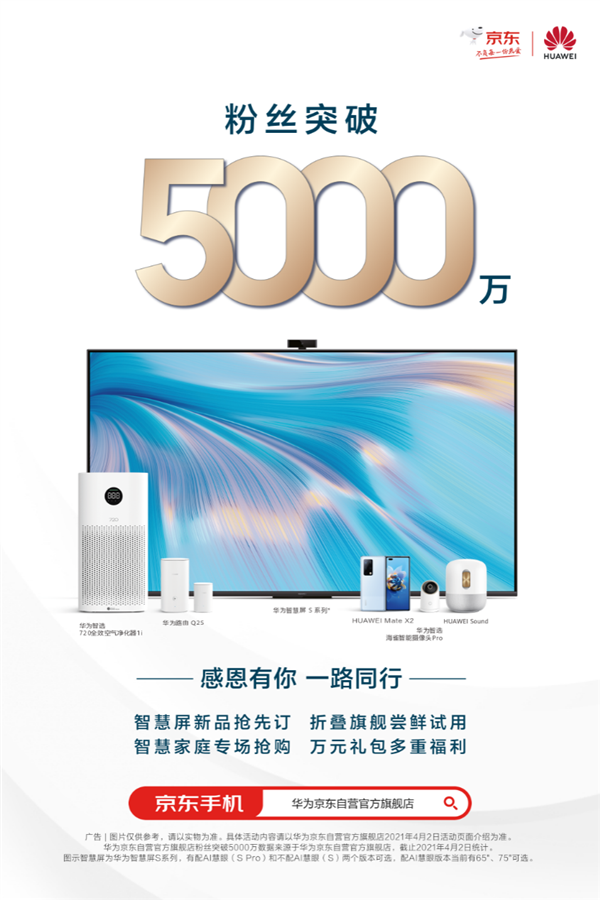