In recent years, consumers are not only satisfied with watching TV, but also pay more and more attention to its game features. For example, the x9000h / x9100h released by Sony last year even sold out during the e-commerce promotion period, which is enough to prove the popularity of the game TV market. Not long ago, Sony TV officially launched a new TV lineup in 2021. As a new generation of Game TV after x9100h, Jingdong x91j is a TV product for mainstream consumers. It can not only meet the needs of consumers' daily watching content, but also support hdmi2.1 interface and Sony game mode, which makes it have powerful game functions, Today I will bring you its experience evaluation. 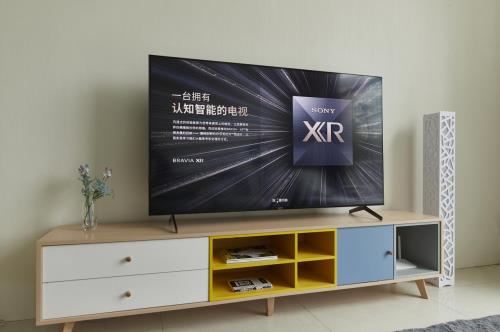 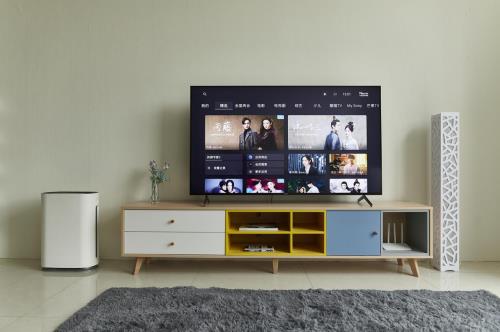 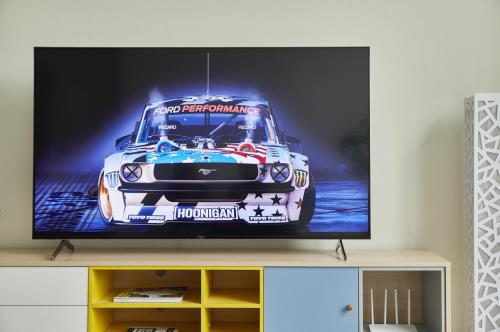 Aiming at the aesthetic needs of Chinese users, x91j specially optimizes and designs the base, frame, etc. for example, the base continues the application of amber gold, and the distinctive color makes it more eye-catching; the frame also uses an integrated seamless process, showing a sense of grade. 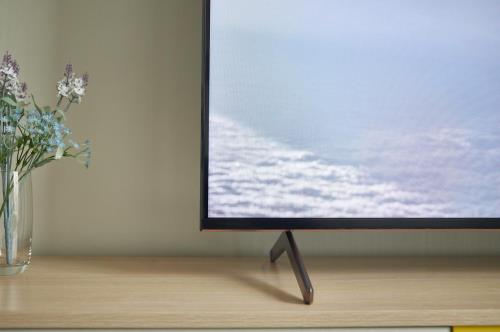 Full screen has become a major trend of modern digital 3C products. Sony x91j keeps up with the trend and further narrows the black edge of the screen to create a higher proportion of the screen. While creating a sense of beauty for the whole machine, the narrow frame also plays a role in weakening the visual effect, further strengthening the visual impact, so that viewers can immerse themselves in the wonderful content. 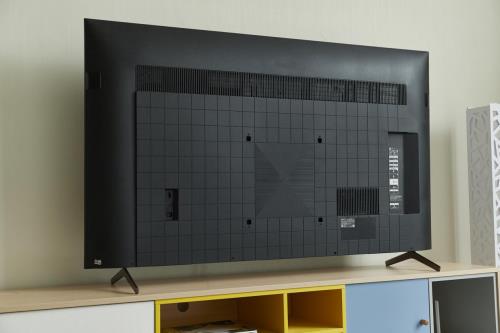 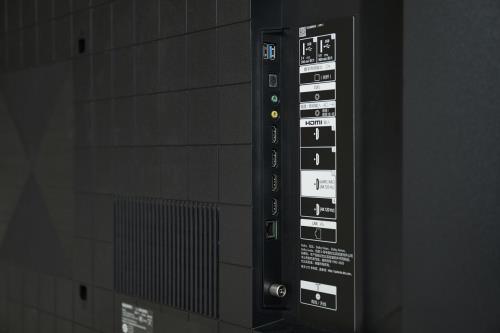 The back interface is quite complete, including HDMI, USB, network interface, audio interface and antenna interface. Among them, HDMI 3 and 4 are 2.1 specifications, which can support 4K 120Hz data transmission at most, laying a foundation for game performance. 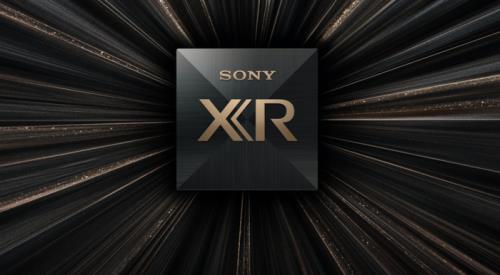 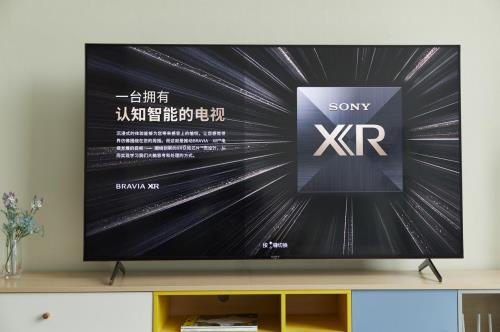 The traditional TV algorithm is similar to the formula, it can only adjust a single element of the picture, such as improving contrast, brightness, saturation and so on. XR cognitive chip can cross analyze a series of elements at the same time as the brain, extract the most concerned part of the picture, adjust and optimize, and present a more vivid picture.

So what is the optimization of the sensory experience of this XR cognitive chip? Next, we will show you through the actual experience. 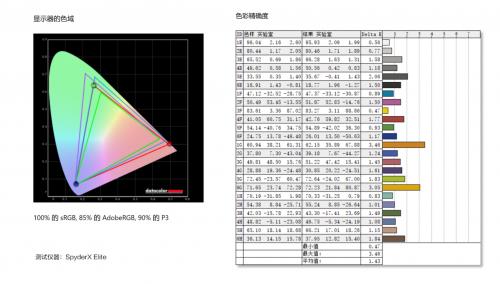 Let's take a brief look at the basic quality of the x91j 4K LCD screen. We use spyderx elite to test the gamut and color accuracy performance in the x91j movie mode (the display mode that can best restore the intention of the film creator). After testing, its P3 gamut has reached 90%, and the average color deviation is only 1.43, which belongs to the excellent level of the same price. 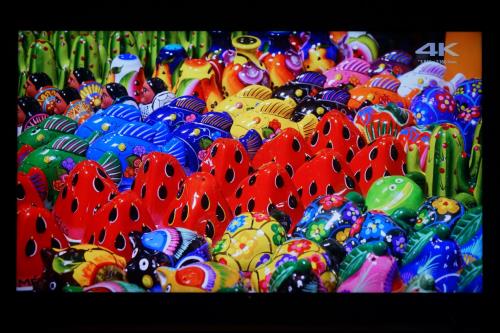 In terms of traditional content display, Sony x91j has some changes in algorithm due to the replacement of XR chip. From the first look, its color saturation is higher than before, that is, more gorgeous, more pleasing to the eye. Its special charm color display technology Pro can help broaden the color gamut of the image, make the image more colorful and vivid. 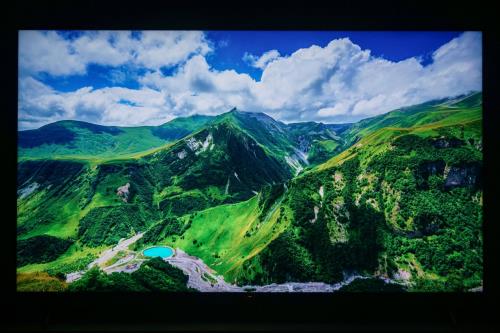 When facing the scene of high light ratio, the level of Flowing Clouds with similar colors in the sky and the details of trees and rocks on the hillside are well preserved, and the shadow differences under similar colors are faithfully restored due to the color gamut, and there is no obvious overexposure in the high light part of white clouds. 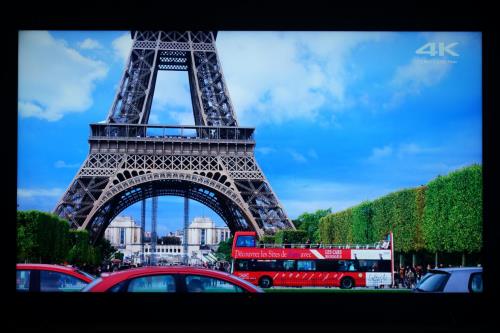 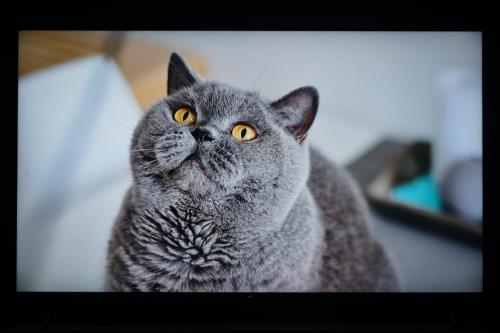 No matter the texture of the cat's hair or the beard is clearly visible in this screen shot of the cat, the details are rich, and the color of the picture is accurate and natural, with high analytical power. 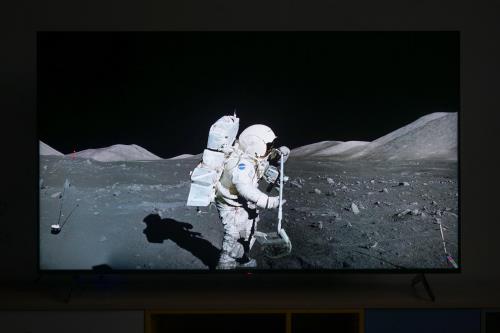 In terms of light control, x91j uses a full array backlight and a newly upgraded advanced version of XR contrast enhancement to enhance the contrast. From the picture, we can see that the black and bright white aviation suits of the endless universe are in sharp contrast, including the black and white debris on the lunar surface under the light irradiation. There is no bright part of explosion, and there is no daubing feeling in the dark part, The whole picture is in high intensity contrast, with distinct layers. 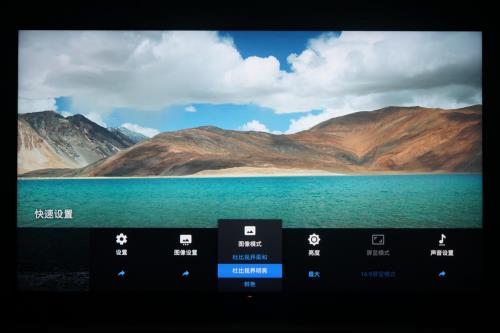 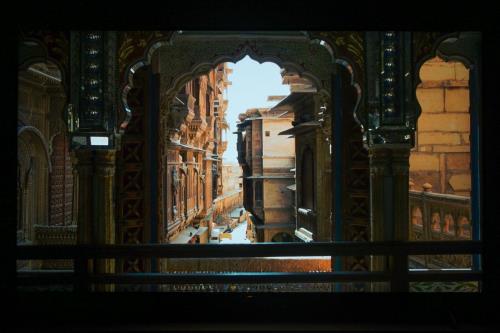 In the extreme high light ratio environment, Sony x91j can not only reasonably suppress the overexposure of high light part, but also retain the details of dark part as much as possible with the help of excellent picture contrast and tolerance, which makes the picture full of layers. 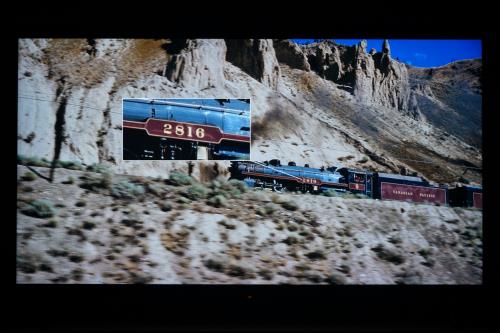 Sony x91j has XR sharp dynamic technology. Through accurate control of dynamic pictures, the TV can maintain brightness and present clear dynamic pictures without dragging shadows. Even if the font on the high-speed sports train is enlarged four times, there is no blur, showing a clear, smooth and bright motion picture.

Generally speaking, the resolution of network video that we often see is only 1080p or even 720p. Low bit rate video is easy to blur when it is displayed on 4K screen, and the XR cognitive chip has the latest XR 4K line doubling technology, which can automatically improve the video definition to 4K. 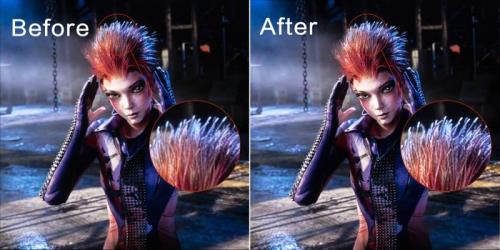 It can be seen from the contrast picture that after the optimization of the XR chip, the hair becomes extra clear, each one can be distinguished clearly, and can be counted one by one. Other details of the characters, such as freckles and folds of leather clothes, are clearly visible.

Due to years of accumulation in the field of film and television production, image quality has always been the strength of Sony TV. However, as mentioned above, in addition to the traditional content of movies and TV series, the group of game players is expanding. They not only need good plot and world outlook, but also pursue realistic audio and visual experience. Therefore, let's take a look at the actual performance of Sony x91j in terms of game content. Next, we select several popular games to comprehensively analyze the sound and image quality of x91j when playing games.

Tomb Raider: shadow is a well-known action adventure game. The game contains a large number of dark fields and high contrast pictures. It needs a display device with excellent picture processing algorithm, otherwise it is likely to lose a lot of dark details. 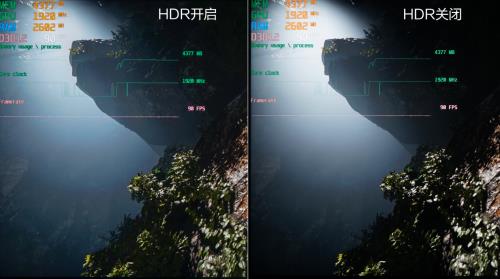 The light in the upper left corner of this picture is very strong. If it is not handled properly, the details inside the cave will be covered up and lost by the highlight. After Sony x91j turns on HDR in the game mode, it can still clearly show the rock texture of the cave wall, including the details of plant leaves. The contrast of the picture is significantly improved, so that players will not miss any details of the game. 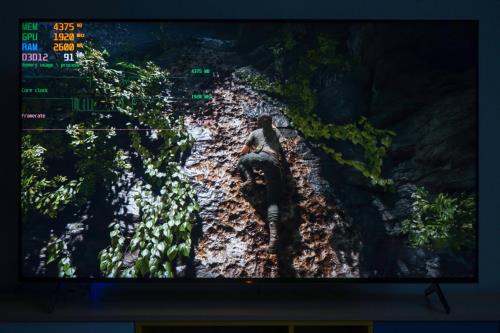 As you can see, thanks to the advanced contrast enhancement version of XR and the full array backlight, when Sony x91j displays the game picture, the bright part in the center of the picture is clear and sharp, and the dark part around keeps deep without losing details. It has extremely high contrast and tolerance, presenting the details in strong light and shadow one by one, making the picture more three-dimensional. 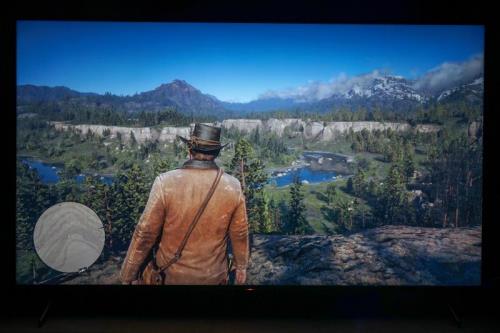 The realistic light and shadow details greatly enhance the depth of field of the picture. The distance between the forest in the middle view and the mountain in the far view is obviously different, so the whole picture is more realistic.

"Dust 3" is a racing game, the most important thing of the game is fluency, any stuck, delay, drag will make the game experience greatly reduced. 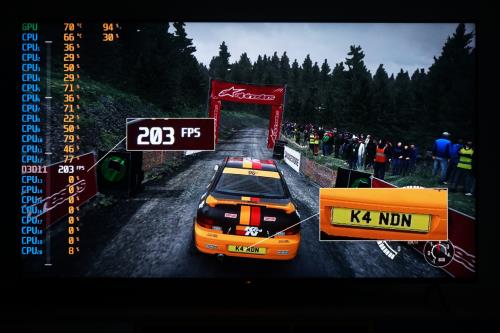 In the case of adequate host performance, the maximum number of game frames can reach about 200fps, while Sony x91j can present 4K 120fps picture, which improves the fluency compared with 60Hz panel. Even when moving at high speed, the text on the car body is still clear without any drag. After the firmware upgrade, VRR variable refresh rate and allm automatic low latency mode can be used to make the game more stable, which is enough for ordinary players.

In addition, it should also be mentioned that because both x91j and PS host are Sony's products, there will be some linkage during operation. Open the host can wake up the PS host synchronously, the operation is quite convenient.

It's the same game "dust 3". In the process of playing, whether it's the roar of the car engine or the friction between the tire and the ground, it's very shocking, three-dimensional and full of on-the-spot feeling, as if you are in a real rally field.

In the movie "number one player", the deafening roar of the engine and the collision between the racing cars come from all sides, which has a sense of three-dimensional and atmosphere. It's just like being in the scene. It's really enjoyable!

In the Dolby panoramic sound experience video, raindrops falling from the sky, birds flying from left to right, x91j can make the sound follow the picture at the same time, and the sense of presence is very strong; the sound image is scattered, and the sound volume of each voice part is properly distributed, and the definition is high, which can well suppress the background noise and make the sound performance more hierarchical.

This is because the x91j has a multi-channel screen sound field, and is equipped with a sound field positioning speaker, which can accurately adjust the direction of the sound, so as to realize high-quality listening and let the user feel that the position of the sound is synchronized with the picture.

Finally, there is the classic song "ferry". At the beginning of the music, a few drums dive down to the right place, with lingering sound. Cai Qin's voice is clear and can be heard all the time.

fiveSystem experience: new version, more in line with the habits of Chinese users 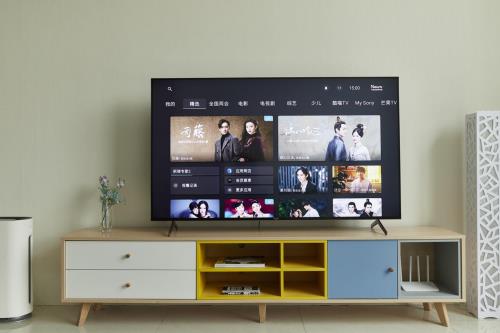 The x91j uses the Android TV10 system, which has a good performance in fluency, security and expansibility. When you turn on the TV, you can see the content information flow. In the future, the intelligent system will push the content more in line with the user's viewing habits. At the same time, it supports users to put their favorite tabs in front to access the content more conveniently. Of course, they can also directly enter the app to watch, with a high degree of freedom.

Far field voice, mobile phone screen these functions have been quite perfect, without remote control, you can achieve content search, content screen and other operations, very convenient. 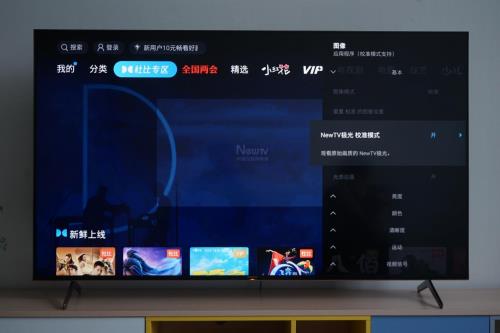 In terms of content, Sony has in-depth cooperation with Tencent video, supporting about 150000 TV dramas, 11000 films, and more than 3000 North American classic films and blockbusters. In addition, after users open the app, they can find the exclusive Aurora calibration mode in the settings, which fully reflects the visual impression that the original author wants to convey when shooting. 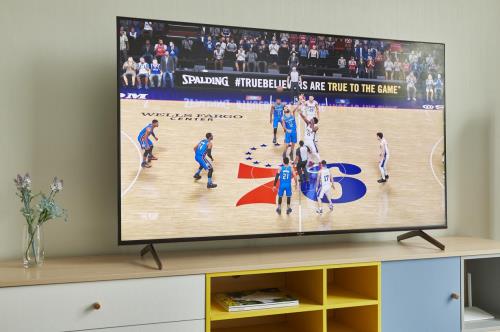 It has to be said that the improvement brought by the new XR cognitive chip is huge. Its many optimization algorithms make the x91j better understand what users want to see and like to see, so as to comprehensively improve the picture quality and sound quality performance. At the same time, the 4K 120Hz screen and hdmi2.1 interface make the x91j a living room game tool. With excellent audio-visual experience, gameplay and reasonable positioning, it's no surprise that the x91j will still be the star product of Sony TV this year. This game TV is now on sale on the JD platform. I believe it will be the best choice for players who want to experience the next generation of games.