According to the owner of the car, on April 1, he drove the model 3 which he had just mentioned for a month into the basement. After releasing the accelerator, the car did not slow down significantly. The owner immediately stepped on the brake, but the brake pedal was stiff and the car made a click. Then, the vehicle hit the opposite vehicle at the original speed.

Then, at 20:30 that night, four staff members of Wuxi Tesla arrived at the scene. They test drove the car and said that the car brake was normal. When the car owner wanted to check the dash cam, he found that the video was not saved at the time of the incident.

In this regard, the staff explained that there are records in the owner's manual. If they are not saved manually or honked, the contents recorded in Tesla dash cam are deleted in an hour cycle.

Therefore, they went to the property together to check the monitoring at the time of the incident. (according to the monitoring of the Property Office, the tail light of our vehicle lights up when I step on the brake, and there is no obvious change in the speed until it hits the opposite vehicle, which lasts for 4 seconds.)

Tesla staff took a video, said they wanted to access background data, and promised to reply to the survey results by phone within 1-2 days. On April 2, the owner received a call from the director of Tesla service center in Wuxi.

According to the information collected on site and Tesla background data, there is no problem with the vehicle, and no fault is found in the braking system.

2. The background data shows that the speed of the vehicle was 26.5 yards per hour, and the ABS began to work after the brake pedal was pressed down for 0.4 seconds. The initial 1.1 second brake pressure was only 56.7 bar, and the last 0.0 seconds brake pressure reached the maximum of 120 bar. The whole process from braking to collision was recorded as 2 seconds.

3. The braking distance may not be as far as the car owner imagined, the car owner may not step on the brake enough, and the epoxy floor road may be wet and slippery in rainy days. These are the causes of the accident.

At present, car owners are still negotiating with Tesla, and their current demand is to return the car. We will also keep an eye on this. 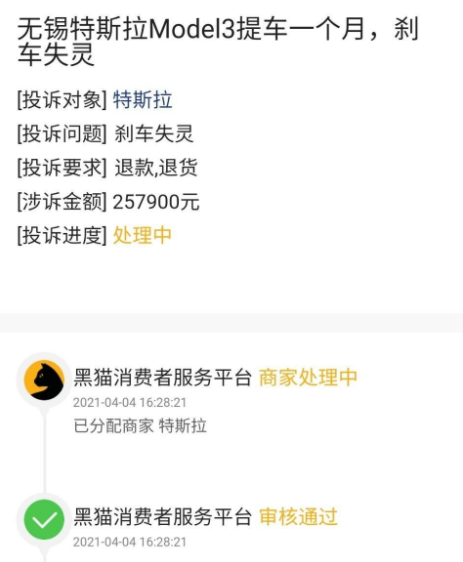 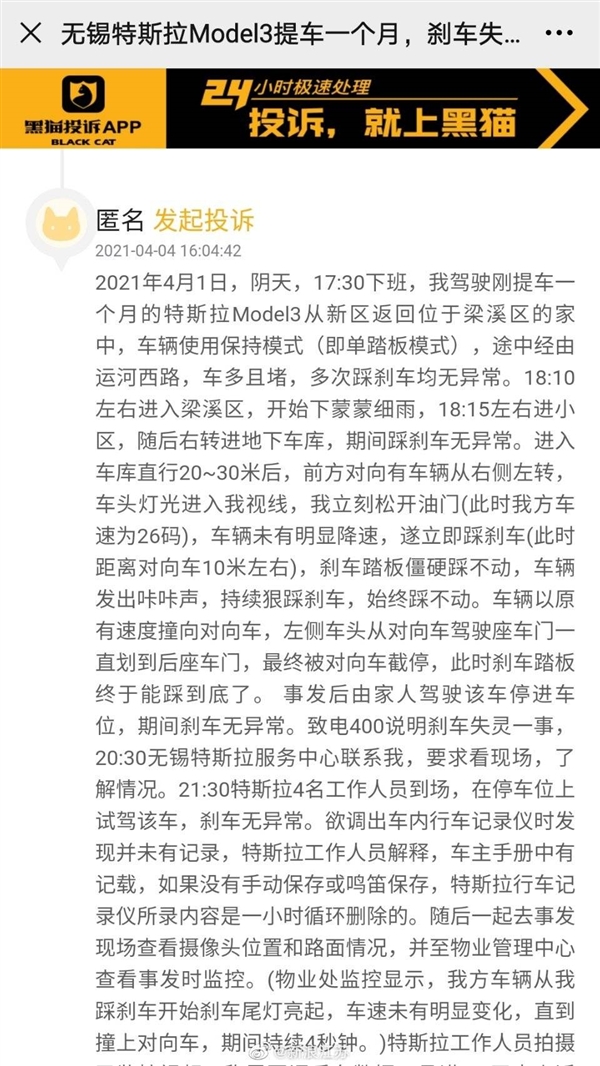 Related news
13 years of history NVIDIA gave up Tesla brand in a low-key way: name collision with electric vehicles
NVIDIA gives up Tesla brand in a low-key way: because of its name collision with famous electric vehicles
NVIDIA classic computing card series Tesla to be renamed: too confusing with Tesla
US Agency investigates touch screen failure or is forced to recall 63000 model s
Wuxi a model 3 basement brake failure crash! Tesla's response: no abnormality in the vehicle
Hot news this week
2021 Hurun self made list of the richest people under 40: 38 year old Zhang Yiming ranks first in China
Tencent Teana laboratory holds a cross boundary Seminar on artificial hearing technology: cochlear implant technology is undergoing cross boundary development
Dada's latest equity exposure: Jingdong is the major shareholder, and Kuai Jiaqi holds 7.8% of the shares
Shell equity exposure: Zuohui has 81% of the voting rights, and Tencent holds 5% of the shares of two shareholders, hillhood
For the first time in history! Sanxingdui "cornucopia" 3 pit successfully took out the complete round mouth square statue
Xiaomi donated to Tsinghua University to set up Xiaomi artificial intelligence Innovation Research Fund
Benchmarking Tesla semi? Geely responded to rumors of developing pure electric heavy truck: no comment
Spend another 20 billion dollars to buy nuance, where did Microsoft spend its ten-year "cash" capability?
With over 17 million number carrying users and 99% success rate in one hour, is it the best time to handle it?
Lenovo he Zhiqiang: the cumulative income exceeds US $500 million, Lenovo venture capital enters the payback period
The most popular news this week
It is reported that Lianfa technology will use 4nm technology to manufacture 5g mobile chips
Tesla hit a tree at high speed, two dead! Police: driving without driving
Hackers focus on virtual currency! A man was stolen more than 2 million yuan
Better than snapdragon 888! Samsung Galaxy Z fold 3 uses snapdragon 888 plus
Post-90s and post-95s become the main force of blind date: China's single population exceeds 200 million
Cryptocurrency crash Market: some people crazy cash out, the U.S. government to move
Not ppt! Take alpha s, Huawei's autopilot, and deliver the Huawei version within this year
1 billion US dollars, over 5000 R & D personnel! Huawei Wang Jun: Huawei Bu has no revenue target this year
Why is "Huawei automobile" known as the first automatic driving? Top executives reveal secrets in person
China's box office will exceed 20 billion in 2021: 5 films will exceed 1 billion. How many have you seen?