The clarity is much better than expected! Tesla car camera video exposure

Some time ago, musk said that it would withdraw the trial rights of some owners' FSD beta versions. The reason is that these car owners do not pay enough attention to the road conditions when using the FSD beta function.

However, some netizens asked, how does Tesla know that the owners of these systems do not pay enough attention to the road conditions? Musk is also straightforward,It means to monitor the driver of the vehicle through Tesla's in car camera. It's also the first time Tesla has officially admitted that it monitors drivers through in car cameras.

It can be seen from the video that the video image recorded by the camera in the car during the day,The clarity and color richness are beyond many people's expectations, and the passengers in the car can be seen clearly.

Without the rear view mirror shell, part of the camera's visual angle is blocked, and only the movement and posture of the drivers and passengers in the car can be seen,But the details of the operation can not be recorded. Moreover, the picture of the rear window can't be monitored. 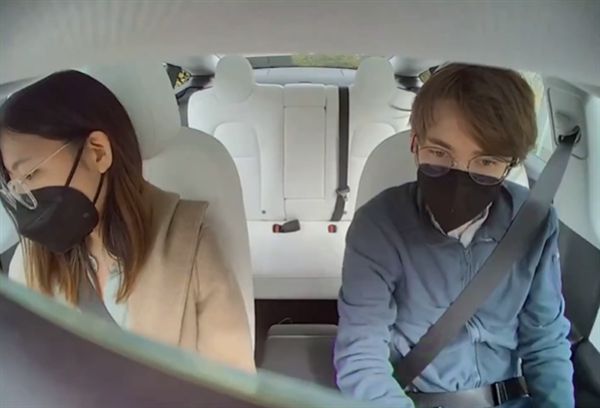 As for the behavior of turning on the camera in the car, Tesla explained,At present, the main purpose is to record the behavior and attention retention of FSD beta owners during the test.

In the Chinese market, because there is no push FSD function, the camera in the car is not turned on. But in this regard, many consumers are still worried about privacy infringement. After all, the car is a relatively private space. If there is a camera facing them, although they promise not to turn on the secret monitoring, they will still feel uncomfortable.