If it's the next generation flight simulation, of course. 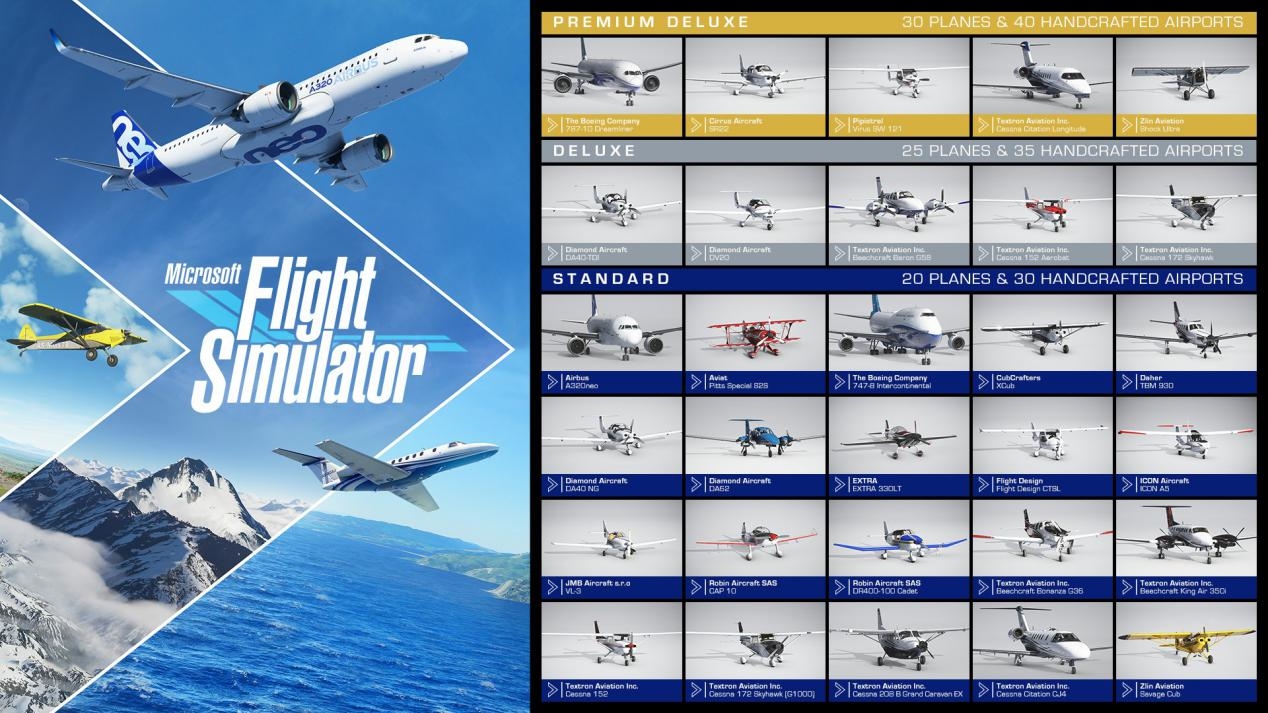 Microsoft flight simulation is a flight simulation game released by Microsoft. It focuses on real flight experience and amazing game screen and environment. It is specially designed for flight simulation fans. 30 different types of aircraft perfectly restore the real layout of their cockpit. All the buttons, levers and knobs you see in the interface can interact with each other, and play the corresponding effect in the real situation. 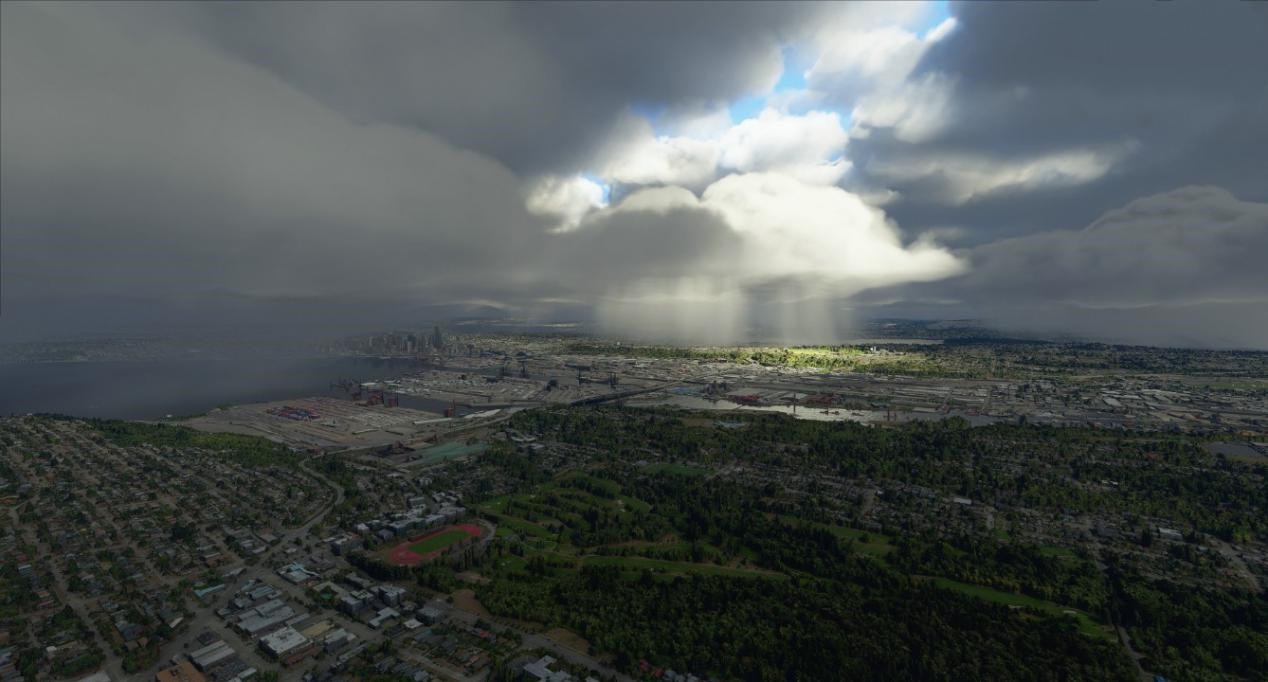 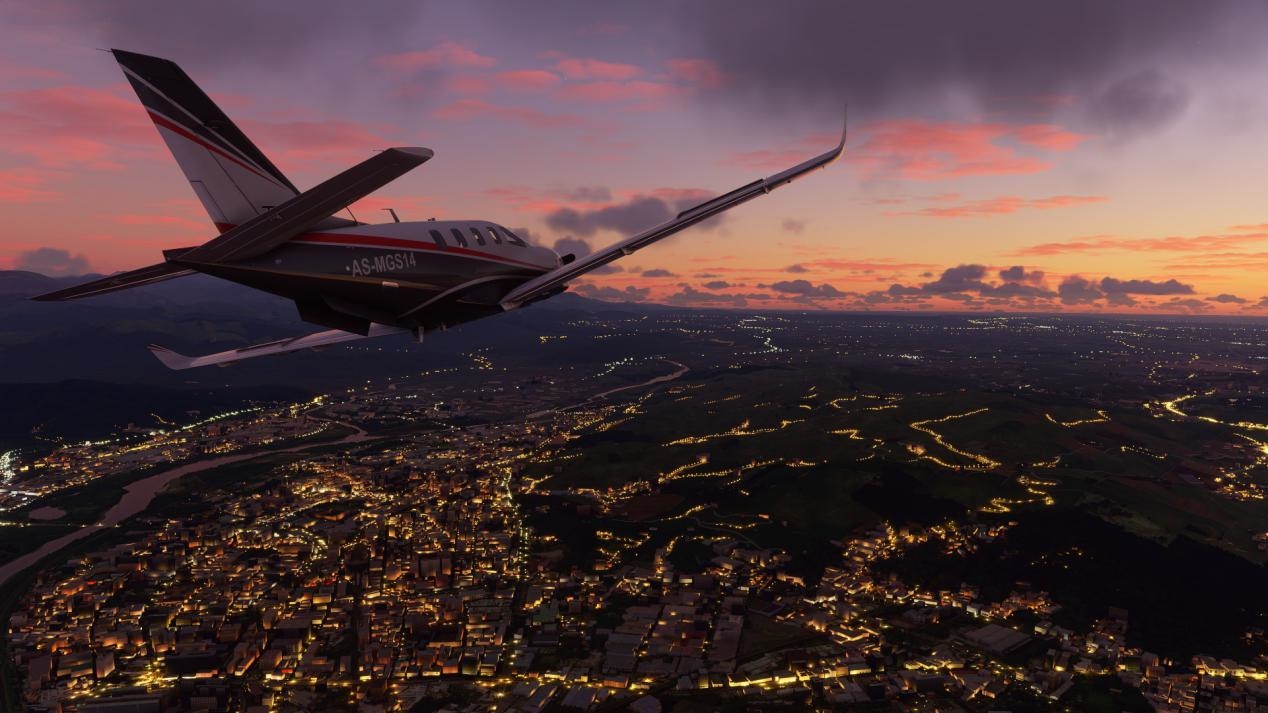 However, in order to experience the high fidelity and realistic "Microsoft Flight Simulation", it is very important to render this immersive simulation scene, which means that there are very high requirements for the system. When Microsoft Flight simulation was launched last August, the RTX 20 series was the best GPU on the market. Now, the RTX 30 series, which adopts the ampere architecture, carries a lot of enhanced functions, which can provide better performance for games.

In order to improve the performance of gprtx and RTX series, a series of simulation tests are carried out. 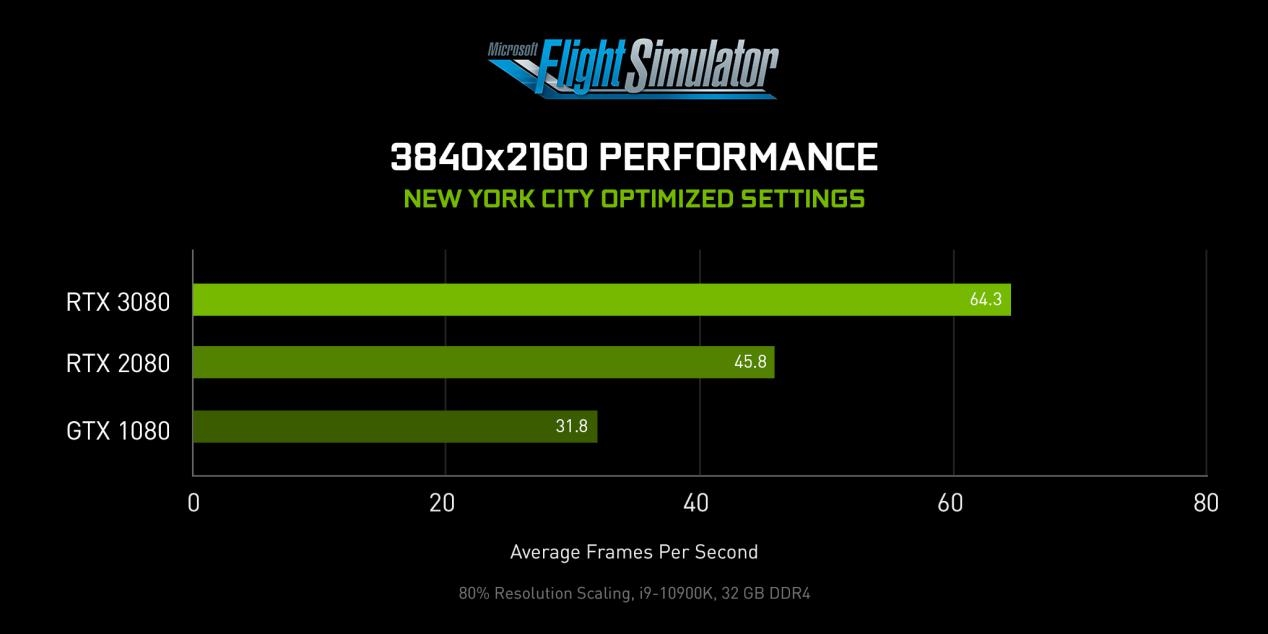 In 4K resolution, RTX 3080 shows strong performance. Players can land, take off and sail in the urban environment full of details with more than 60 FPS frames and excellent image quality in microsoft flight simulation. In addition, the higher frame number can also bring better response ability of the controller, so as to achieve a smoother and immersive game experience. 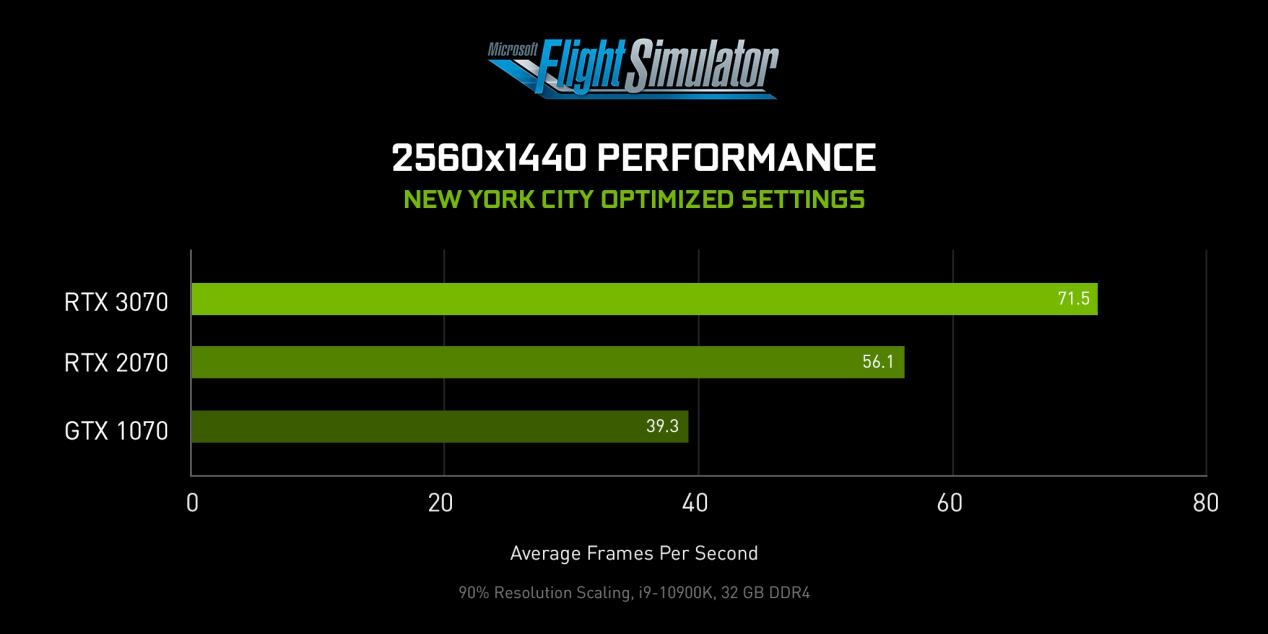 At 2K resolution, the average frame rate of RTX 3070 is 71.5 FPS, which is nearly twice as high as the 39.3 FPS of GTX 1070. However, in the actual game process, the frame rate of GTX 1070 is difficult to maintain a sensitive and playable frame rate when landing, which is the decisive moment of flight. When using RTX 3070, the frame rate is never lower than 50FPS, or even can be maintained at about 70fps, which allows players to always have an excellent game experience. Its rich and delicate graphic performance enables players to immerse themselves in realistic flight simulation. 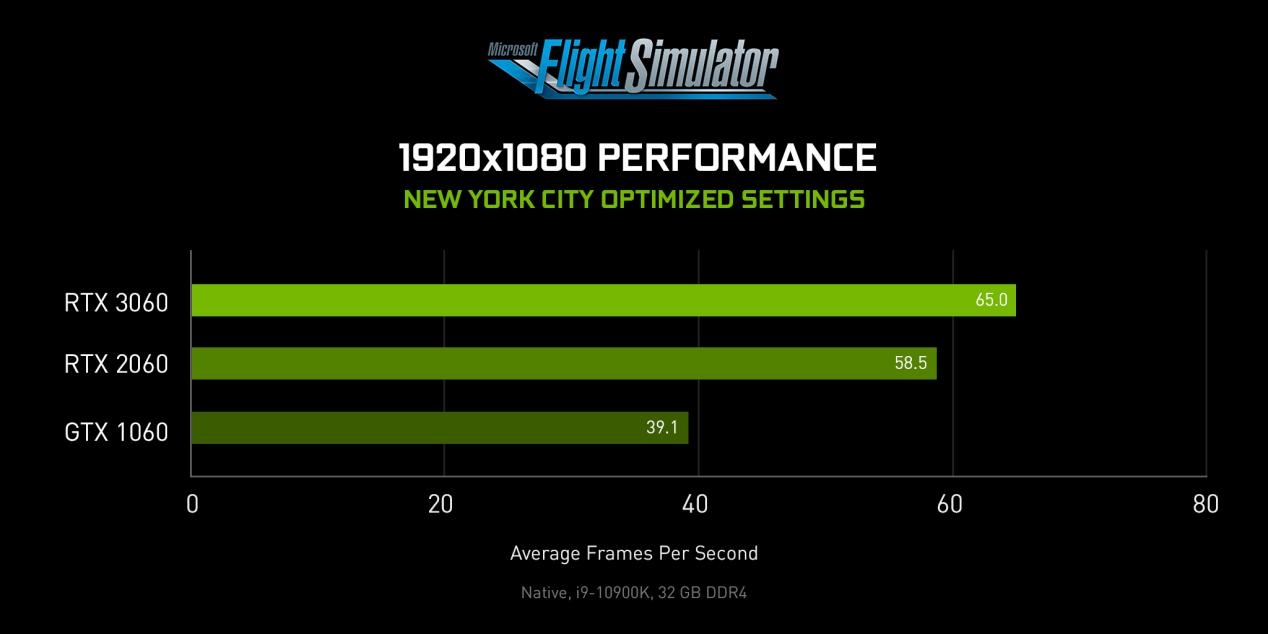 On steam, GTX 1060 is one of the most popular GPUs and one of the most commonly used GPUs in microsoft flight simulation. At 1080p resolution, compared with GTX 1060, RTX 3060 can also achieve significant performance improvement, and continue to provide high playability and responsive game experience 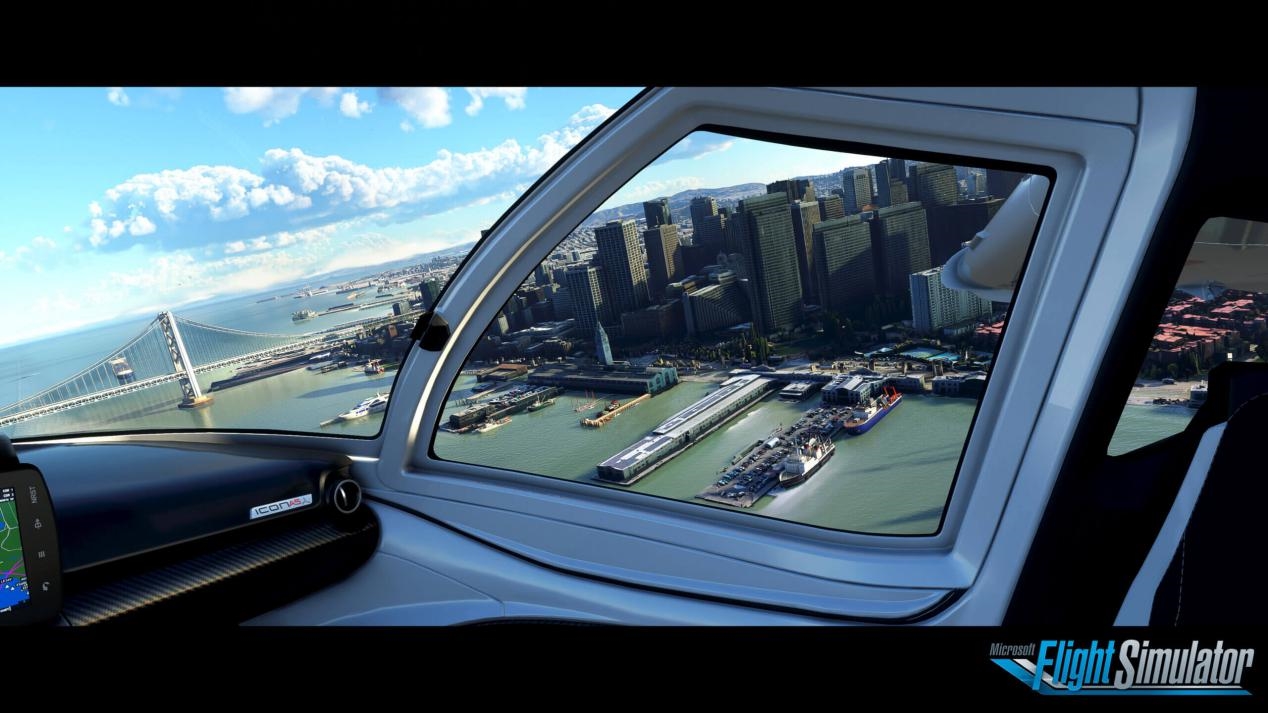 On the whole, by upgrading the RTX 30 series graphics card, the performance can be doubled on average, so as to obtain a faster, smoother, responsive and highly playable game experience, enjoy a more realistic and immersive experience of Microsoft Flight Simulation, and create a real flight simulation experience. 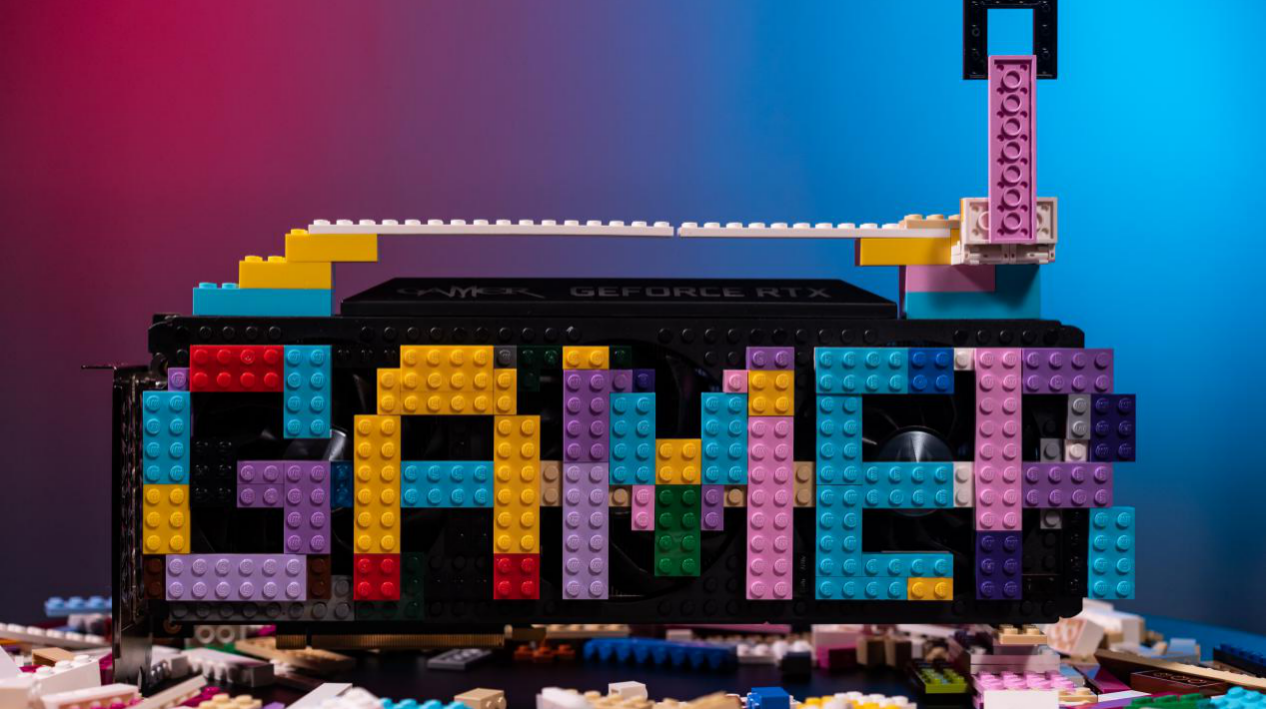 If you have decided to upgrade, you might as well try the imager RTX 3080 gamer graphics card, with new DIY building block elements, easy to recruit personalized graphics card, equipped with 10Gb gddr6x video memory and GA 102 core, with strong performance, you can easily deal with all kinds of 3A masterpieces.