Spend another 20 billion dollars to buy nuance, where did Microsoft spend its ten-year "cash" capability?

Today, Microsoft and nuance, an AI and voice technology company, jointly announced that the two sides have reached a final agreement that Microsoft will acquire nuance with a cash transaction value of $56 and $19.7 billion per share. This price is not only about 23% higher than the closing price of nuance last Friday, but also makes nuance officially the second largest acquisition in Microsoft's history, second only to the $24 billion acquisition of LinkedIn in 2016. 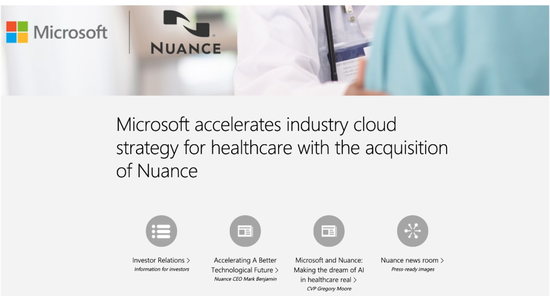 What company is nuance and why can Microsoft make a big bet? Looking back at Microsoft's acquisition footprints over the years, what is the technology giant planning?

Before the disclosure of this huge acquisition, I believe many people have never heard of nuance, but in the field of speech recognition, nuance is famous.

If you want to find a company with similar business in the Chinese market, it should be iFLYTEK. Nuance has a much longer history in the field of speech recognition than iFLYTEK, which was founded in 1999. 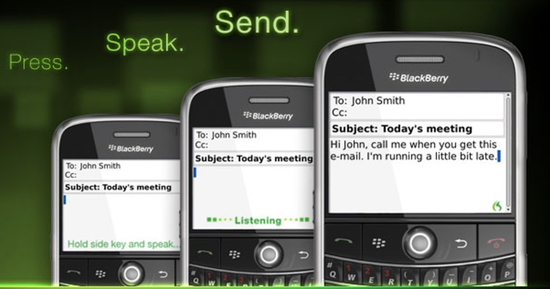 Later, when developing Siri, apple did not hesitate to find nuance as the basic supplier of Siri's speech recognition. At the same time, it also provides on-board voice technical support for dozens of major global automobile manufacturers, such as Audi, BMW, Daimler, Ford, SAIC, etc., and then splits the on-board voice business and goes on the market separately in the name of cerence in 2019.

In addition to providing technical support for mobile voice recognition, nuance also provides automated customer service solutions for many financial and Internet institutions. Today, nuance has more than 1000 patented technologies, and its voice products can support more than 50 languages, with more than 2 billion users worldwide.

However, with the rapid development of mobile voice in recent years, major companies have begun to build their own teams to develop voice assistants, and the industry competition is becoming more and more fierce. Therefore, nuance has gradually shifted its business focus to the healthcare field in recent years, which is also the focus of Microsoft's acquisition.

It has been proved that nuance is also developing rapidly in the medical field. According to the official website of nuance, their AI driven solutions have been adopted by 90% of the hospitals and 10000 medical organizations in the world, and more than half of the doctors in the United States are using the intelligent medical services provided by nuance.

In the latest fiscal year, nuance achieved a revenue of $1.48 billion and a net profit of $91 million. Does that sound like a small profit? However, we need to know that they still lost 217 million US dollars last year, and their profits quickly turned positive in just one year, which is enough to see their huge development potential.

Since the first acquisition of forthought in 1987, Microsoft has completed more than 270 acquisitions, with an average of six companies purchased each year. It can be said that Microsoft is one of the most favorite companies among the technology giants. 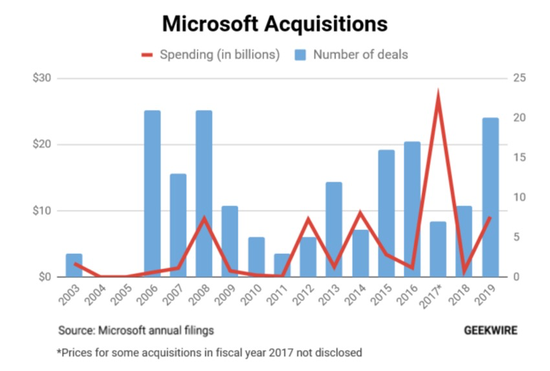 Figure the number of acquisitions and finance of Microsoft in recent years. The picture is from geekwire

Among these acquisitions, including nuance today, there have been 13 acquisitions with a value of more than $1 billion.

Looking at these companies that Microsoft has bought at a high price, many people may be confused. They feel that Microsoft is buying everything, one for mobile phones, one for platforms and one for games. They don't know what kind of chess they are playing. 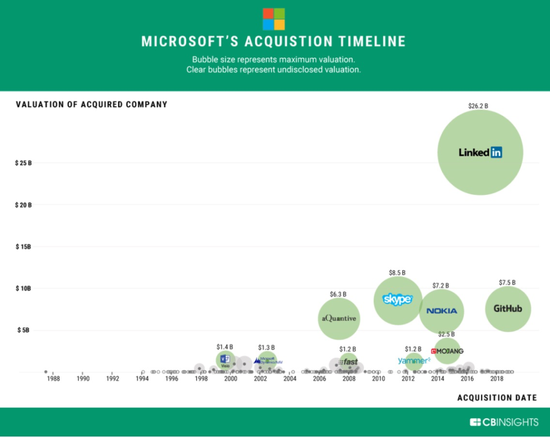 As of the end of 2018, the picture of Microsoft's large acquisition is from cbinsights

But when we look at the essence of these acquisitions, we will find that the acquisition of Microsoft has been carried out around the main line of SaaS (software as a service).

However, with the rapid rise of Google, apple and Amazon in the early 20th century, under the huge market challenge, Microsoft finally came to realize and started the Internet strategy rapidly from 2005. Therefore, when we look back at the acquisition history of Microsoft in recent years, we will find that Microsoft's large-scale acquisition cases basically occurred after 2005.

In the next decade, Microsoft started the transformation from PC software to Internet services, and comprehensively explored SaaS solutions based on cloud. Since then, whether Skype, GitHub, LinkedIn or nuance are acquired, in fact, they are all aimed at enabling their products to quickly cut into a wider Internet field, link to more users, and then make profits by selling software and services.

The second segment: social field. From Skype to LinkedIn, mixer to GitHub, and even the rumor of last year's acquisition of tiktok, all show Microsoft's intention to access more Internet users through social platforms.

Of course, because Microsoft lost the first chance in the wave of mobile Internet, in the more than ten years of determined reform, many times it relied on money to indulge in crazy gambling, spent a lot of money, and finally lost. Like, um, Nokia.

Lay out the future: invest heavily in AI healthcare in recent years

In 2014, Microsoft announced its first wearable device, Microsoft band, and then launched the Microsoft Health cloud health information management service application to help users track heart rate, steps, sleep and other health data. Although the app will be officially closed in 2019, it is also seen as a major attempt by Microsoft to get involved in the field of health. 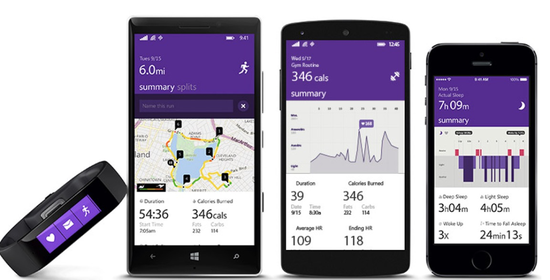 In 2017, Microsoft announced its cooperation with the University of Pittsburgh Medical Center and jointly launched an AI medical plan called healthcare next to study how to use artificial intelligence to complete electronic medical record data input, AI triage, auxiliary outpatient work, etc., and make use of Microsoft's advantages in AI and cloud technology to carry out medical innovation. 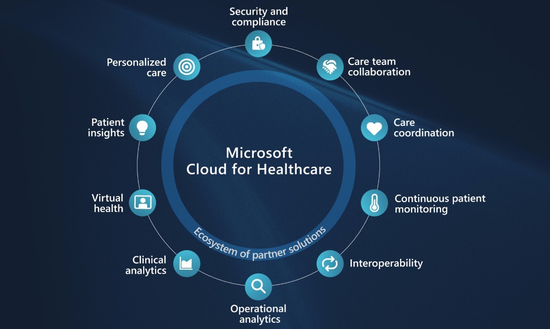 In the promotion of these major strategies, Microsoft also cooperates with many medical institutions and technology companies around the world, including nuance. Before today's acquisition, nuance has actually cooperated with Microsoft for more than two years.

Related news
Microsoft Build Conference: Windows Retreat, Microsoft Rebirth
German school bans Microsoft Office 365: due to privacy concerns, illegal use
129 billion yuan in cash! Microsoft officially acquires nuance, an intelligent voice giant
Spend another 20 billion dollars to buy nuance, where did Microsoft spend its ten-year "cash" capability?
Hot news this week
Meet the opportunity of the times: the omni channel era of mobile communication in the eyes of practitioners
Can new crown vaccination affect sperm? The scientists concluded that there was no substantial effect
Three major operators will delist from the United States: the United States seriously undermines normal market rules and order
Qualcomm Mengpu: Qualcomm has always been the role of technology empowerer, enabling various industries with 5g and AI
Do you have to pay taxes for the high popularity rate? Chinese electric vehicle companies vie to enter Norwegian Market
It is said that India has not approved the import of WiFi modules from China, and many companies have delayed the launch of new products
It's an "irreversible" three pole battle of automatic driving, with Dajiang's entry, Huawei's attack and Baidu's insistence
The brand strategy of Jingdong life service of consumer Expo has been continuously completed, and the three kilometer life service circle category has been further expanded
2021 survey report on employment of rural women in China: more and more rural women are employed at home, and 60% of the respondents say they will wear light make-up when they go out
Nintendo, the most powerful legal department in the East: ask the mobile game company to compensate 9.6 billion yen
The most popular news this week
After sales processing time shortened from 3 days to 3 hours, Alibaba creates "mobile workbench" for businesses
799 yuan! Pre sale of Xiaomi noise reduction headset Pro: support 40dB active noise reduction
What's the situation of the first batch of factory e-commerce people going to the sea now
Ali Zhang Yong responds to the administrative punishment of the State Administration of market supervision: sincerely accept and resolutely obey
Win10 push the latest system upgrade! Solve the problem of high CPU utilization rate of multitasking
Jingdong Logistics has 260000 employees, with an average monthly expenditure of nearly 9000 yuan
Refuse to light up card: AMD Navi 24 small core also has 1024 stream processors
The host of the game peed in the hot water bottle of the hotel and threatened to give the next guest a drink
Indian doctors warn that cow dung treatment is ineffective: it could also complicate the epidemic
New release of hardware dog: graphics card runs more accurately