Two yuan each! China's first self driving bus put into operation in Chongqing

In China, many areas have started the test work of driverless bus. Chongqing, this time, is in front of many cities in China. 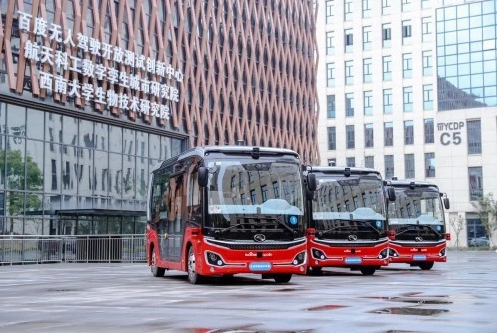 According to the Chongqing general manager of Baidu's intelligent transportation business, the self driving bus has four laser radars, two millimeter wave radars and seven monocular cameras, which can sense the vehicles and pedestrians within two or three hundred meters of the surrounding area with a variety of technologies.

Each intersection is also equipped with an edge computing unit, which calculates the coming vehicles and people in all directions of the intersection, and integrates them with the perception of the vehicles themselves, so as to realize the vehicle road cooperation, so as to prevent the perception error.Every self driving bus will have a safety officer who can switch to manual driving at any time.

The bus can achieve accurate stop, cope with the bus stop scene and more complex urban road conditions, and meet the normal operation needs of the bus.

At present, three self driving buses have been put into operation in the area. The operation route passes through shennu lake, agricultural machinery school, Xinglong lake and other stations, with a two-way mileage of nearly 10 km.Passengers can make an appointment in advance through app ports such as Baidu map and Yongchuan service commune to experience the self driving bus trip, with a single ticket price of 2 yuan per person. 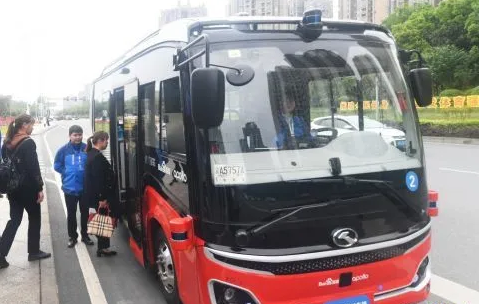 Related news
Ma Huateng appeared on the platform: Tencent WeCity landed in Chongqing Southwest headquarters officially opened
Baidu Apollo settled in Chongqing Li Yanhong: Helping Chongqing to create "smart mountain city"
Baidu and Chongqing reached a strategic cooperation: Li Yanhong platform, Apollo landing
Here comes the driverless bus: Baidu Apollo and Jinlong promote the first L4 class automatic driving CMB
Def con China restarts Baidu security to hold the world's first all VR geek conference with def con
Baidu won the first demonstration operation license of self driving bus in China
Two yuan each! China's first self driving bus put into operation in Chongqing
Hot news this week
Meet the opportunity of the times: the omni channel era of mobile communication in the eyes of practitioners
Three major operators will delist from the United States: the United States seriously undermines normal market rules and order
Can new crown vaccination affect sperm? The scientists concluded that there was no substantial effect
It is said that India has not approved the import of WiFi modules from China, and many companies have delayed the launch of new products
It's an "irreversible" three pole battle of automatic driving, with Dajiang's entry, Huawei's attack and Baidu's insistence
The brand strategy of Jingdong life service of consumer Expo has been continuously completed, and the three kilometer life service circle category has been further expanded
Qualcomm Mengpu: Qualcomm has always been the role of technology empowerer, enabling various industries with 5g and AI
Do you have to pay taxes for the high popularity rate? Chinese electric vehicle companies vie to enter Norwegian Market
2021 survey report on employment of rural women in China: more and more rural women are employed at home, and 60% of the respondents say they will wear light make-up when they go out
Nintendo, the most powerful legal department in the East: ask the mobile game company to compensate 9.6 billion yen
The most popular news this week
After sales processing time shortened from 3 days to 3 hours, Alibaba creates "mobile workbench" for businesses
799 yuan! Pre sale of Xiaomi noise reduction headset Pro: support 40dB active noise reduction
What's the situation of the first batch of factory e-commerce people going to the sea now
Ali Zhang Yong responds to the administrative punishment of the State Administration of market supervision: sincerely accept and resolutely obey
Win10 push the latest system upgrade! Solve the problem of high CPU utilization rate of multitasking
Jingdong Logistics has 260000 employees, with an average monthly expenditure of nearly 9000 yuan
Refuse to light up card: AMD Navi 24 small core also has 1024 stream processors
The host of the game peed in the hot water bottle of the hotel and threatened to give the next guest a drink
Indian doctors warn that cow dung treatment is ineffective: it could also complicate the epidemic
New release of hardware dog: graphics card runs more accurately