On April 19, the 2021 Shanghai Auto Show opened, but no one thought that Tesla's booth turned into a rights protection site.

It is reported that,

Later, the female owner was dragged away by two staff members.

According to media reports, police reported this morning that the woman was detained for five days for disturbing public order.

After the incident, it caused a hot discussion all over the Internet, and Tesla related topics were hot searched on Weibo. 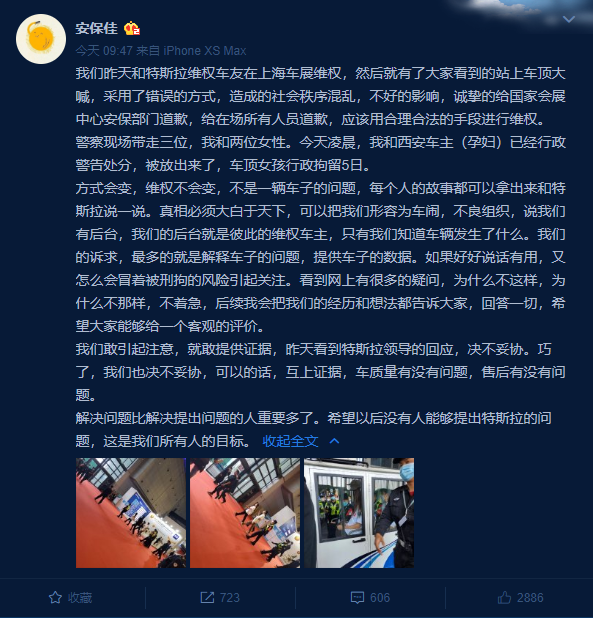 Today, a party involved in safeguarding the rights of Tesla's booth said through Weibo,I sincerely apologize to the Security Department of the National Convention and Exhibition Center and to all the people present. We should safeguard our rights by reasonable and legal means.

At the same time, the owner said, the way will change, rights protection will not change, everyone's story can come out and tell Tesla.

The truth must be revealed to the world. We can be described as car trouble and bad organization. We have backstage, and our backstage is the owner of each other's rights. Only we know what happened to the car.

Most of our demands are to explain the problems of the car and provide the data of the car. If we dare to attract attention, we dare to provide evidence.

In response, the owner said,We will never compromise. If we can, we will provide each other with evidence.

It is understood that rights owners have experienced a collision accident. Tesla said in a statement that it is willing to assist in the completion of inspection, maintenance or insurance claims, and put forward a variety of solutions. However, as the owners do not accept any form of third-party inspection and strongly reject all the solutions proposed by us, the relevant matters can only be communicated continuously. 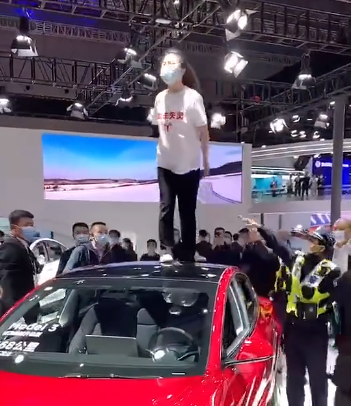 Related news
13 years of history NVIDIA gave up Tesla brand in a low-key way: name collision with electric vehicles
NVIDIA gives up Tesla brand in a low-key way: because of its name collision with famous electric vehicles
NVIDIA classic computing card series Tesla to be renamed: too confusing with Tesla
Hot news this week
Meet the opportunity of the times: the omni channel era of mobile communication in the eyes of practitioners
Three major operators will delist from the United States: the United States seriously undermines normal market rules and order
Can new crown vaccination affect sperm? The scientists concluded that there was no substantial effect
It is said that India has not approved the import of WiFi modules from China, and many companies have delayed the launch of new products
It's an "irreversible" three pole battle of automatic driving, with Dajiang's entry, Huawei's attack and Baidu's insistence
Qualcomm Mengpu: Qualcomm has always been the role of technology empowerer, enabling various industries with 5g and AI
The brand strategy of Jingdong life service of consumer Expo has been continuously completed, and the three kilometer life service circle category has been further expanded
Do you have to pay taxes for the high popularity rate? Chinese electric vehicle companies vie to enter Norwegian Market
2021 survey report on employment of rural women in China: more and more rural women are employed at home, and 60% of the respondents say they will wear light make-up when they go out
Nintendo, the most powerful legal department in the East: ask the mobile game company to compensate 9.6 billion yen
The most popular news this week
After sales processing time shortened from 3 days to 3 hours, Alibaba creates "mobile workbench" for businesses
799 yuan! Pre sale of Xiaomi noise reduction headset Pro: support 40dB active noise reduction
What's the situation of the first batch of factory e-commerce people going to the sea now
Ali Zhang Yong responds to the administrative punishment of the State Administration of market supervision: sincerely accept and resolutely obey
Win10 push the latest system upgrade! Solve the problem of high CPU utilization rate of multitasking
Jingdong Logistics has 260000 employees, with an average monthly expenditure of nearly 9000 yuan
Refuse to light up card: AMD Navi 24 small core also has 1024 stream processors
The host of the game peed in the hot water bottle of the hotel and threatened to give the next guest a drink
Indian doctors warn that cow dung treatment is ineffective: it could also complicate the epidemic
New release of hardware dog: graphics card runs more accurately