"My world" mosaic into a realistic blockbuster, NVIDIA and black Technology

Let's take a look at an island Blockbuster:

It's not a photographer's masterpiece, it's from gancraft.

The original image is a mosaic scene in my world

Now "my world" has really become, my world!

How realistic is it? And compared with other models.

Feel the effect of gancraft again: (color and picture quality are compressed)

Through comparison, we can see that:

Im2im (image to image conversion) methods, such as Munit and spade, can not maintain the consistency of the viewing angle, because the model does not understand the 3D geometry, and each frame is generated independently.

WC vid2vid produces consistent video, but due to the error accumulation of block geometry and training test domain, the image quality decreases rapidly with time.

Nsvf-w can also produce output that is consistent with the view, but it looks dull and lacks detail.

The image generated by gancraft not only maintains the view consistency, but also has high quality.

How is this done?

The use of neural rendering in gancraft ensures the consistency of view, and the innovative model architecture and training scheme achieve unprecedented realism.

Firstly, a neural radiation field with voxel (volume element) as boundary is defined, and a learnable eigenvector is assigned to each corner of the block;

Then, the trilinear interpolation method is used to define the location code at any position in the voxel to represent the world as a continuous volume function, and each block is assigned a semantic label, such as soil, grass or water.

Then, MLP is used to implicitly define the radiation field, with location code, semantic tag and shared style code as input, and point features (similar to radiation) and their volume density are generated.

Finally, given the camera parameters, the 2D feature image is obtained by rendering the radiation field, and then converted to image by CNN.

Although voxel conditioned neural rendering model can be established, there is no image that can be used as ground truth. Therefore, researchers use confrontation training method.

But "my world" is different from the real world. Its blocks usually have completely different label distribution, such as: the scene is completely covered by snow or water, or multiple biological communities appear in one area.

In random sampling, using Internet photos for confrontation training will produce results that are not practical 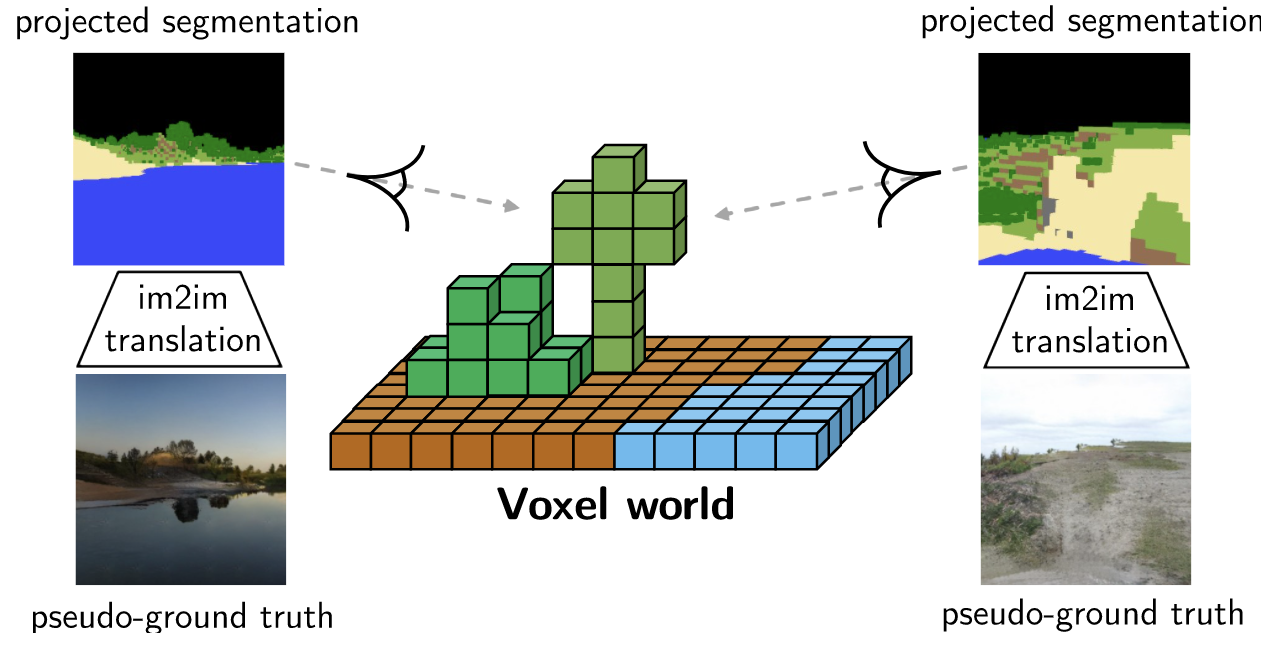 This not only reduces the mismatch between tag and image allocation, but also makes faster and more stable training with stronger loss. The generation effect has been significantly improved

Its introduction page says: it turns every minecraft player into a 3D artist!

Moreover, it simplifies the 3D modeling process of complex landscape scene, and does not need many years of professional knowledge.

Related news
Microsoft's garage application Read My World online: improve literacy rate in daily use (Figure)
NVIDIA: has no intention of competing with Intel for the CPU market
Gu Geyun's purchase price of cornerstone technology is unknown
Google cloud has acquired cornerstone technology and the price has not been disclosed
NVIDIA history: why does Lao Huang crush Intel?
NVIDIA Huang Renxun preheating RTX 30 series graphics card: the most exciting moment for game users
NVIDIA 456.71 graphics driver release: specially optimized for black action
Hot news this week
Meet the opportunity of the times: the omni channel era of mobile communication in the eyes of practitioners
Can new crown vaccination affect sperm? The scientists concluded that there was no substantial effect
Three major operators will delist from the United States: the United States seriously undermines normal market rules and order
Qualcomm Mengpu: Qualcomm has always been the role of technology empowerer, enabling various industries with 5g and AI
Do you have to pay taxes for the high popularity rate? Chinese electric vehicle companies vie to enter Norwegian Market
It is said that India has not approved the import of WiFi modules from China, and many companies have delayed the launch of new products
It's an "irreversible" three pole battle of automatic driving, with Dajiang's entry, Huawei's attack and Baidu's insistence
The brand strategy of Jingdong life service of consumer Expo has been continuously completed, and the three kilometer life service circle category has been further expanded
2021 survey report on employment of rural women in China: more and more rural women are employed at home, and 60% of the respondents say they will wear light make-up when they go out
Nintendo, the most powerful legal department in the East: ask the mobile game company to compensate 9.6 billion yen
The most popular news this week
AMD and "ex girlfriend" lattice core decoupling: in the future, we can choose any manufacturer to process chips
After sales processing time shortened from 3 days to 3 hours, Alibaba creates "mobile workbench" for businesses
799 yuan! Pre sale of Xiaomi noise reduction headset Pro: support 40dB active noise reduction
What's the situation of the first batch of factory e-commerce people going to the sea now
Ali Zhang Yong responds to the administrative punishment of the State Administration of market supervision: sincerely accept and resolutely obey
Win10 push the latest system upgrade! Solve the problem of high CPU utilization rate of multitasking
Jingdong Logistics has 260000 employees, with an average monthly expenditure of nearly 9000 yuan
Refuse to light up card: AMD Navi 24 small core also has 1024 stream processors
The host of the game peed in the hot water bottle of the hotel and threatened to give the next guest a drink
Indian doctors warn that cow dung treatment is ineffective: it could also complicate the epidemic