Recently, amd officially launched the fidelity FX super resolution (FSR) technology at the Taipei Computer Show, claiming that the performance of 4K games can be improved by more than 200%, which will be used against NVIDIA's DLSS technology.

According to gamesdar,After the release of AMD FSR technology, Microsoft announced that it will add support to the next generation Xbox series X / s, which can provide higher game frame rate performance.

It is reported that FSR is developed around advanced spatial magnification algorithm, which brings excellent game experience through ultra-high image quality edges and unique pixel details. 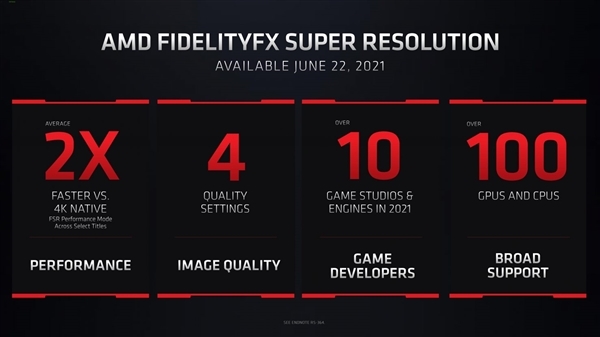 At present, FSR has been supported by more than 10 game studios and game engines, covering more than 100 CPU and GPU products.

In the official demonstration of godfall, based on the RX 6800 XT platform, 4K has only 49fps. After FSR is turned on, the number of frames in four levels of image quality is increased to 78fps, 99fps, 124fps and 150fps respectively, and the performance is improved by more than 206%. The effect is not inferior to that of DLSS.

It is believed that Microsoft Xbox series X / s, with the blessing of AMD FSR technology, will bring unparalleled game experience to players.

The official said that the configuration of the host of Bank of China Version is completely consistent with that of the overseas version, both of which are equipped with AMD 8 core processor. The difference between the two is only a small gap of 0.2ghz in the core frequency. The former has 3.8ghz, while the latter has 3.6ghz, but the overall performance difference is not big.