How big should the iPhone Battery be to satisfy you?

First of all, if the iPhone can have 4500 MAH as the current Android flagship, it can basically meet my needs. After all, I have eight hours of bright screen per day.

Although the iPhone and the big battery have always had a grudge, it has recently been revealed that the iPhone 13 series battery will soar, and the super large cup is close to 4500mAh, which seems quite credible. Everyone is talking about it. Let's talk about it today. 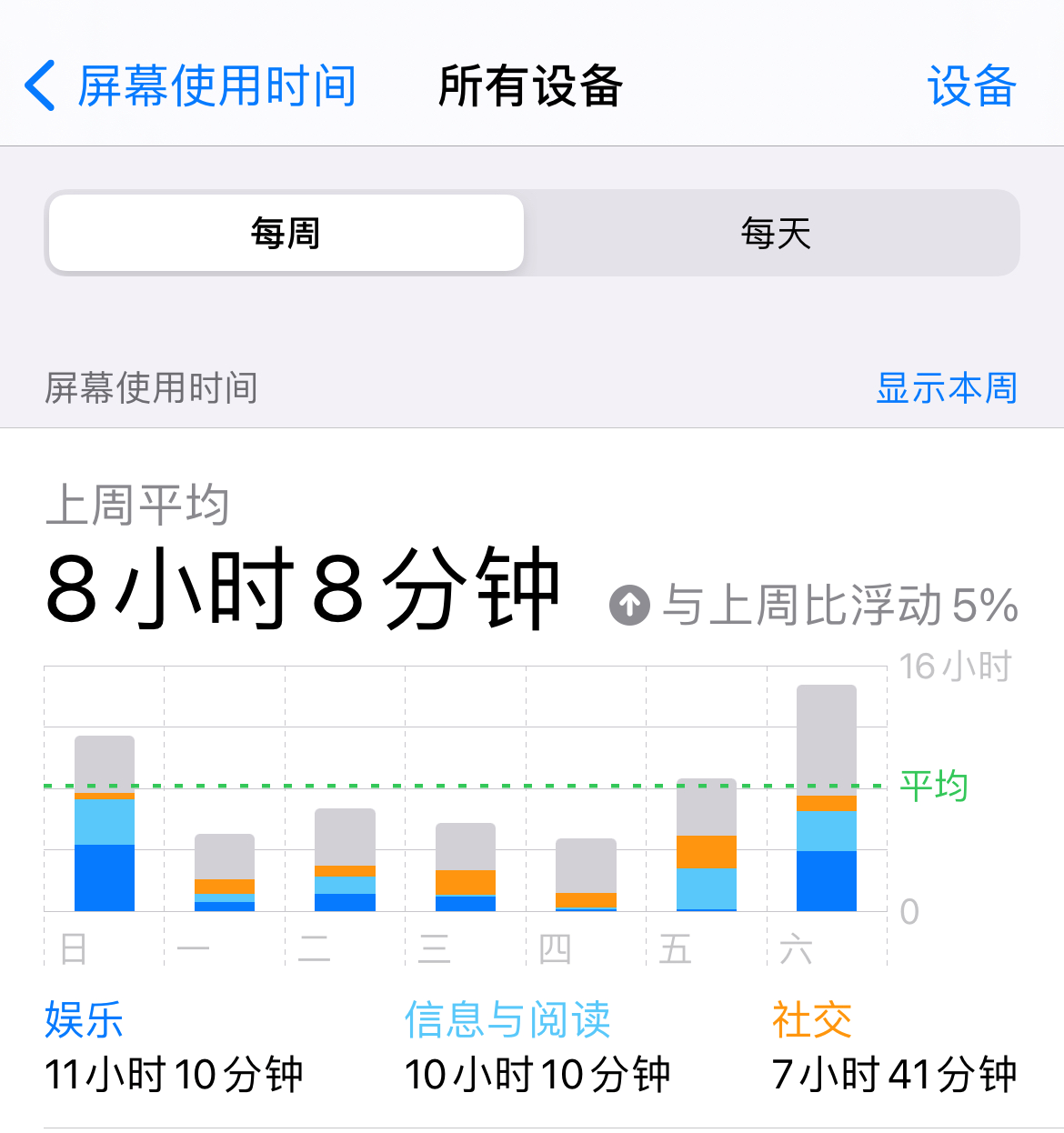 According to the @ digital chat station, the suspected iPhone 13 series battery is connected to the Internet: 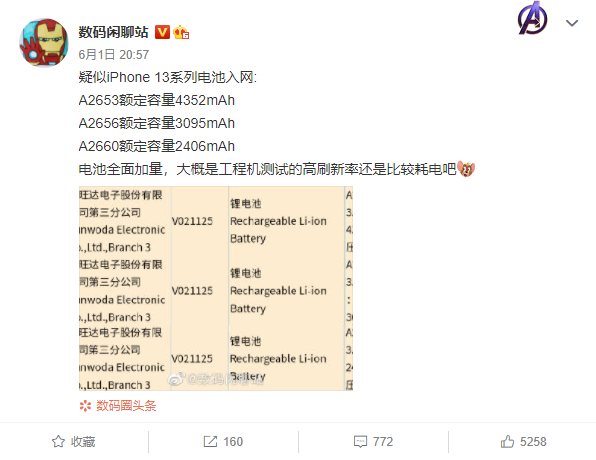 The launch of the iPhone series is usually in September, and in theory the iPhone 13 series has been finalized.

So we can come up with real materials, combined with the product model, production company, and the success rate of standing brother's usual disclosure, which makes the iPhone 13 series battery capacity skyrocketing credible. 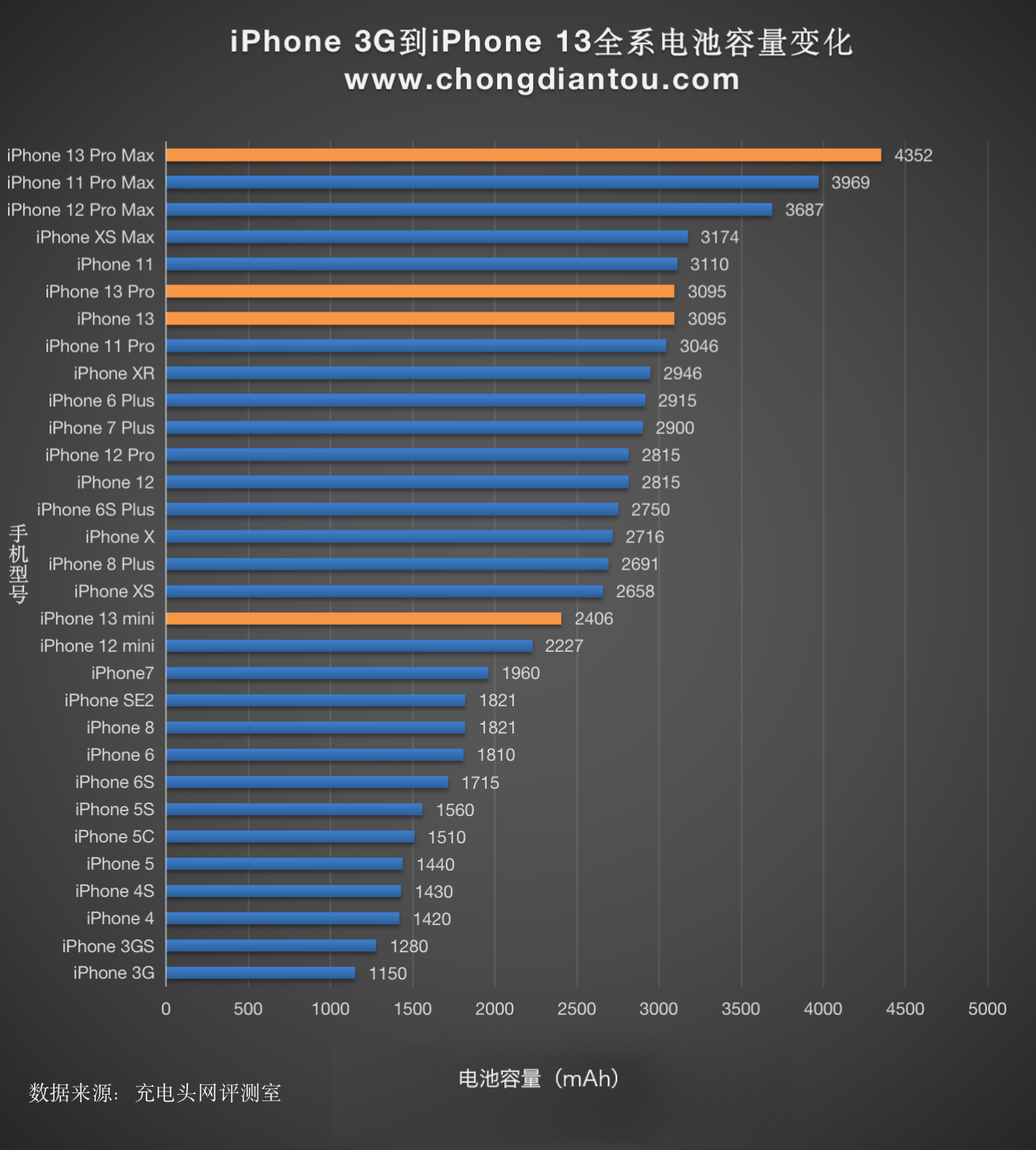 Put the released iPhone 13 series into the statistical table of battery capacity change of all iPhone series, we can see that the iPhone 13 Pro Max is the best, and the iPhone 13 / 13 Pro is also second only to the super large cup and the iPhone 11 which is famous for its large battery; Even the iPhone 13 Mini can be in the middle of the list.

The reasons behind it

Apple is very good at making trade-offs in the balance, often giving up some things that make people itch, such as 3.5mm headphone holes, such as the high refresh rate that has been popularized in the middle and high end of Android.

A lot of people also defend for Apple: the iPhone 12 is not equipped with a high-speed brush. They are just worried about the endurance. The technology is not a problem at all. When it comes to the iPhone 13, they will definitely be equipped. Wait and see!

Another reason for large batteries is 5g. As we all know, the iPhone with 5g has a significant decline in battery life. The iPhone 5g came later than other home, probably because of the impact on battery life.

These brands all have their own sources of information and are more sensitive to the general trend of the industry. Now they are all rushing towards 30W. Naturally, they believe that the iPhone 13 series will be upgraded.

In the Android mobile phone market, Samsung, the largest mobile phone brand in the world, has also adopted the strategy of canceling the standard charger. Its power supply accessories market has great potential, and the demand for 30W PPS fast charging accessories is also very strong. 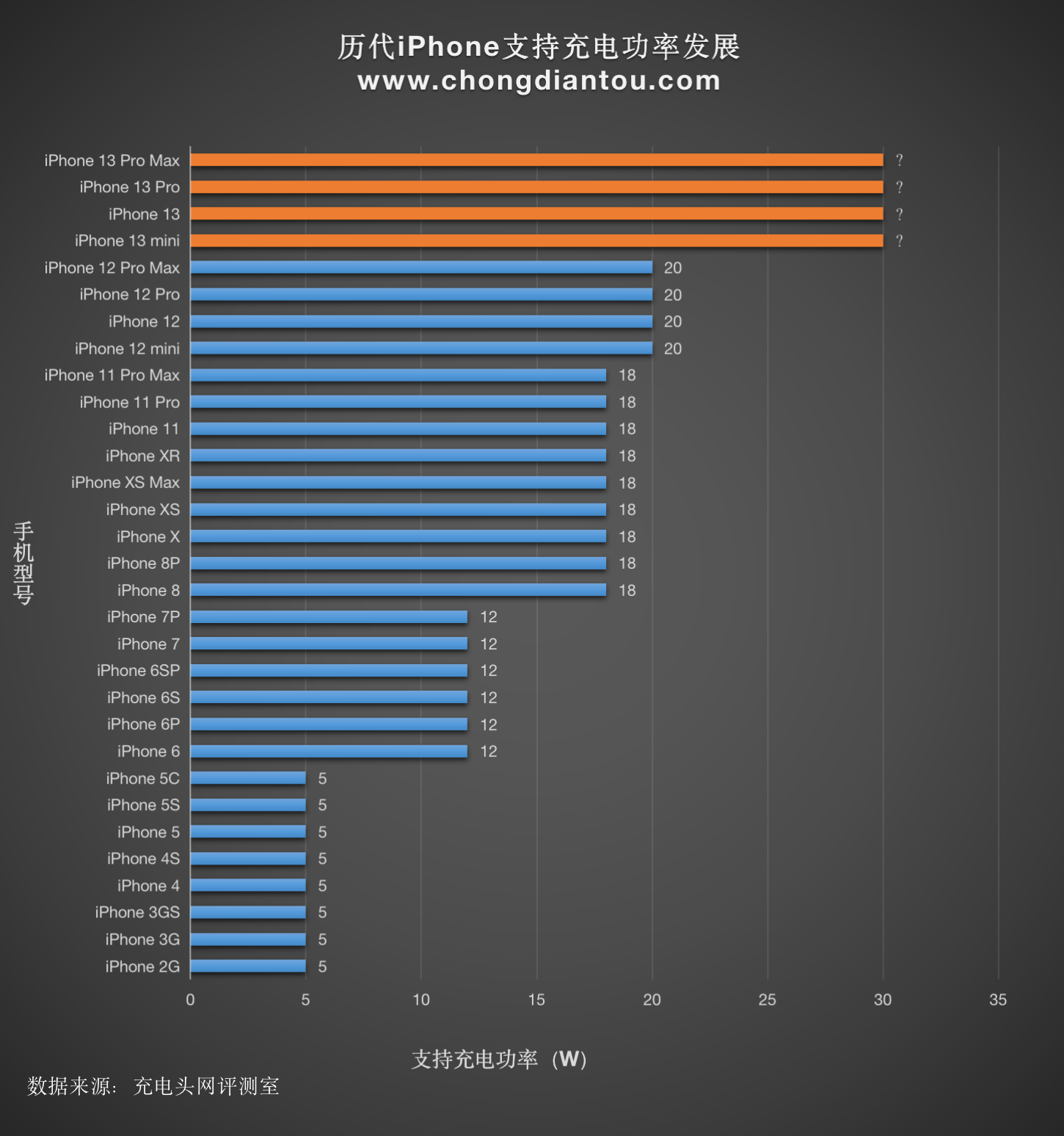 Compared with the rapid development of domestic android flagship, iPhone's fast charging may have more advantages in compatibility. After all, major third-party accessory manufacturers, even Xiaomi and Nubia, have launched various 20W PD fast charging. But 20W is 20W after all. It will be 2022 soon. Apple will have to work harder to squeeze toothpaste, at least 30W.

I don't know if you've noticed that when manufacturers compare Android phones with iPhone's fast charging speed, they will emphasize on wattage. After all, the digital contrast is the strongest. Of course, manufacturers will also mention the charging time, such as 50% charging in 15 minutes, but we rarely mention that the big battery of Android mobile phone makes fast charging not so fast in a sense.

Here is not an example of a specific model. The logic is very simple: Apple's battery is small, even if it is 20W, it can achieve the effect of 30W and 40W in the general sense of Android manufacturers.

Apple is already a reaper of profits in the smartphone industry. You can say that it is squeezing toothpaste. With its strong technology accumulation, it can really play some new tricks every year; You said you didn't squeeze toothpaste, some things can't be on, consumers still buy it.

So the expression of high EQ is: Apple has prepared a bigger battery for the iPhone 13, with a faster charging speed, because it didn't match the 50 / 60% charging speed in half an hour; What's the use of charging so fast? We will only be more and more impetuous. We should put down our mobile phones more and have a look at the beautiful world.

Whether it's a surge in iPhone 13 battery capacity or a fast charging upgrade, these are all conjectures or revelations. Here we are. Let's look at other guesses. 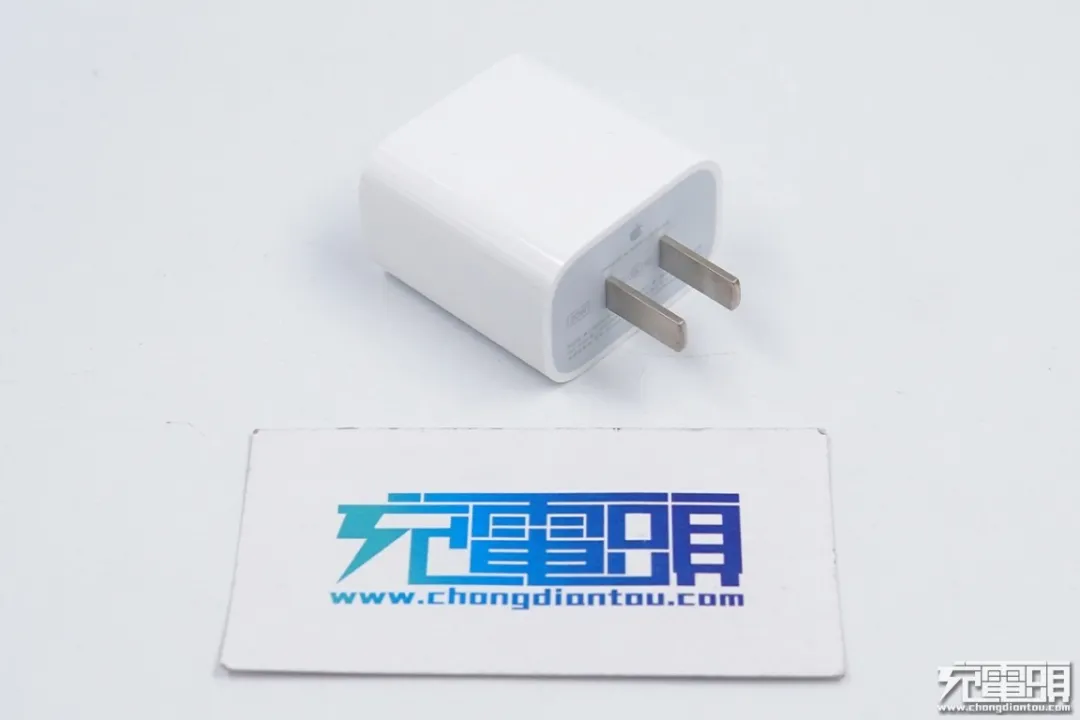 At that time, the explosion of the 20W charger was indeed right, but the charge pump still disappeared.

It's not really a cutting-edge technology. Simply speaking, charge pump is a non inductive DC-DC converter, which uses capacitor as energy storage element to convert voltage and current. Half voltage charge pump (2:1 charge pump) can reduce the output voltage by half and double the output current. The conversion efficiency can reach more than 97%, which is much higher than that of ordinary charging chip.

This efficient conversion solves the heating problem of charging chip during high-voltage fast charging, and reduces the cost of charger and charging cable compared with low-voltage direct charging technology, so charge pump is widely used in the field of mobile phones.

Today, Qualcomm qc5 has announced that no matter how Apple squeezes toothpaste, does it have to have some hard power?

At present, the development of Gan fast charging market has entered the fast lane. Both mainstream mobile phone brands and established pen and TV manufacturers have carried out corresponding product layout in this field, and there are numerous e-commerce brands.

According to DIGITIMES, a well-known semiconductor company in the industry will get an order for Apple's fast charging based on GaN technology this year, and TSMC will provide Gan chips for nano and micro semiconductors.

This means that with many brands using Gan on their own adapters, apple can't sit still. I even think this is not in line with Apple's style. After all, the cost of Gan chips is relatively high. But it's OK to think that Apple won't come with a charger for mobile phones now. Anyway, consumers will pay for it.

The digital circle is big, the real world is bigger. Many functions are out of the digital circle, and the masses of consumers are not particularly concerned about them. Apple, which sells the most expensive and sells the most, naturally considers the choice of products for the largest consumer groups. In addition, Apple's products are sold all over the world with great differences, and it's normal for apple to become more conservative.

Therefore, whether the informant obtains some information in advance from the industrial chain or other channels, it may not match the result of the final product release.

But there is a saying that the year 2022 will be right after the release of iPhone 13. Apple's fast charging should be upgraded, and the high brush should be replaced. In this way, the battery really needs to be increased. As for what Apple thinks, let's wait for the release in September or October.

Related news
Disassembly report: iPhone 11 Pro smart battery case smart battery case (a2184)
IPhone 13 battery capacity soars! Charger to upgrade?
It doesn't smell good? The latest survey shows that only 10% of iPhone users are willing to upgrade iPhone 13
When is it cost-effective to buy iPhone 12 after the release of iPhone 13?
Apple released the iPhone 13 mini, iPhone 13 mobile phone: conscience 128GB, the strongest start, 12 million double shots
Hot news this week
Tencent Music rose more than 3%, and its average monthly revenue of more than 10,000 musicians in 2021 doubled, and NFT will generate revenue for musicians
China Telecom and Huawei jointly released "Super Time Frequency Fold" 5G Determine Network wireless key technology
CNKI is a wholly foreign-owned enterprise? A-share listed company Tongfang shares responded in this way...
Apple has increased incentives in China to up to 15,000 yuan after cutting the trade-in price in the US
Washing your nose with salt Water may Prevent COVID-19, experts warn
"Tmall responds to over 300 minus 50" to the hot search, netizens: Don't engage in Olympiad, less routine more sincerity
Gree Electric has nothing to do with Gree Real Estate! Dong Mingzhu reiterated that he did not do finance and real estate
Xiang responded to Tesla's lawsuit by saying he was dissatisfied with tesla's arrogant attitude but not defamatory
Microsoft has launched an adaptive mouse for people with disabilities that can be assembled as many parts as they want
After the release of the 2999 yuan new machine, it instantly became the hottest model in the headlines: dominating the list all night
The most popular news this week
The domestic screens are rolled to the 2K screen. Why don't Apple follow the roll?
Experts remind: Do not put disinfection pieces to the sewer, it is useless and harmful to disinfection outdoor outdoor disinfection
Flying Pig's new "Yunyou Museum" can watch the live broadcast of nearly 20 museums in China
DEEPMIND training more than 600 tasks such as chatting, playing games, and accumulating wood
4K display uses 240Hz for the first time! Samsung's new flagship display is coming
Accidentally found a new track! AMD Rayon 7 6800U batch arrived
Better iPhone signal! Apple has released a new official version of iOS
iPhone security big overturn, built-in chip low-power operation, after shutdown can still be tracked location
Hong Kong stocks popular technology stocks rose sharply: JD.com rose more than 9% Ali rose more than 8%
Yu Minhong: Strive to open source while reducing costs quickly, or New Oriental will die