Accidentally, the second-hand iPad I bought on a certain platform overturned

It's a sad story to tell. Recently, Tony bought a second-hand iPad on a certain platform, and I feel that my IQ has been seriously despised by the store....

The specific cause of the matter is this.

A while ago, Apple launched new IOS, iPad OS, watchos, tvos and Mac OS systems at the WWDC 2021 developer conference, and announced the list of compatible models for each new system? 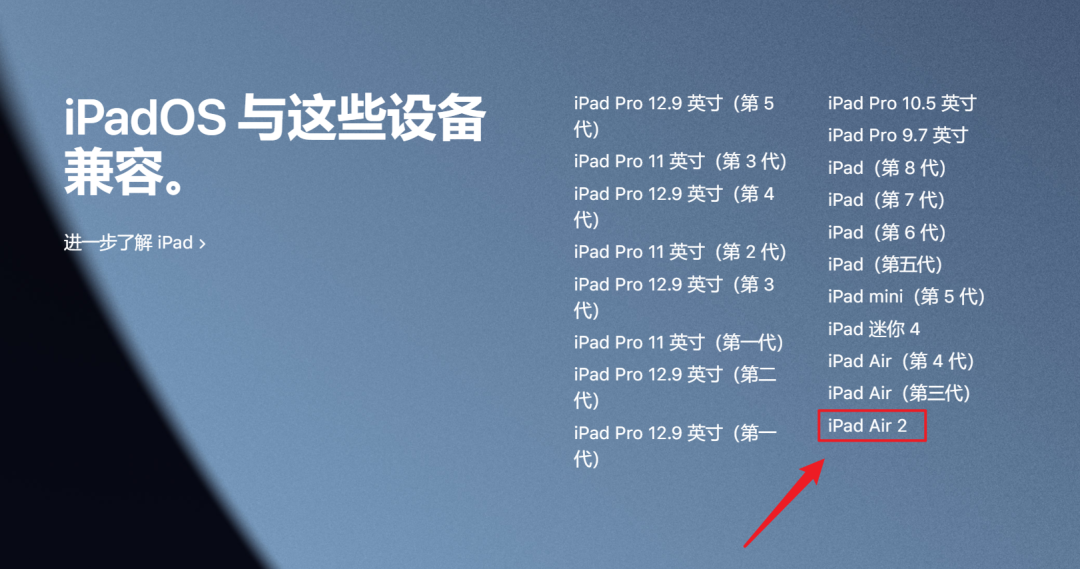 You know, this iPad was released by Apple as early as 2014, and it was discontinued in 2017. It's seven years old, so it's time to retire.

But can you imagine that it can even be upgraded to the latest system? Considering that almost none of the other tablets released at the same time can upgrade the new system, it seems that apple is too conscientious!

So in order to find out how the new system works on the iPad air2, Tony decided to take a second-hand iPad air2 and plan to upgrade it to the new system. After some experience, he will write an article to share with you.

At the beginning, things went smoothly. After finding a store with high sales volume and high praise, which only sold original second-hand iPads, Tony finally bought a 128G 99 new iPad air2 for 1329. 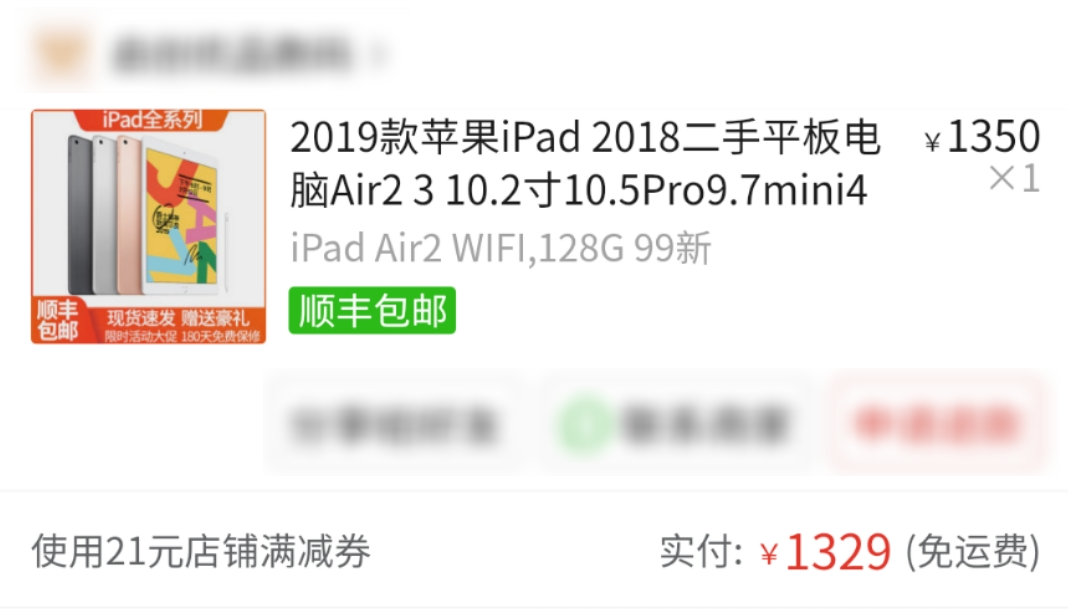 When I saw that the seller still sent me SF express, Tony even gave the title of the article before the express delivery arrived 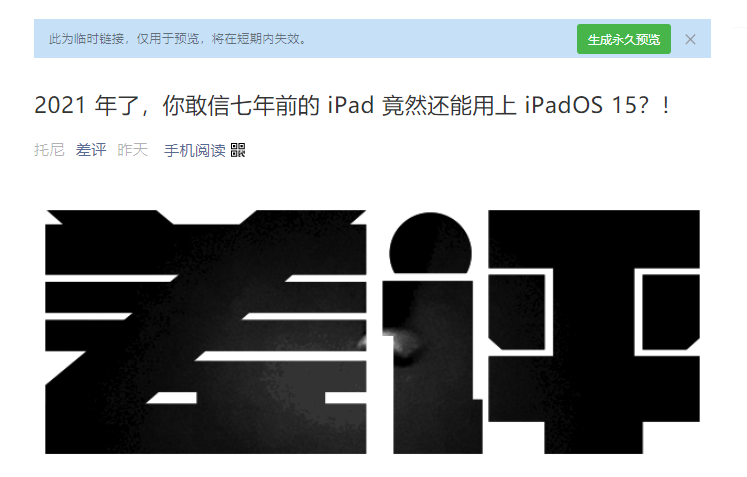 Before the express official sign in, Tony also kept an eye on it and carefully checked the appearance of the second-hand iPad air2. There were no big bumps and scratches on the whole machine, which really met the business description of 99 new. 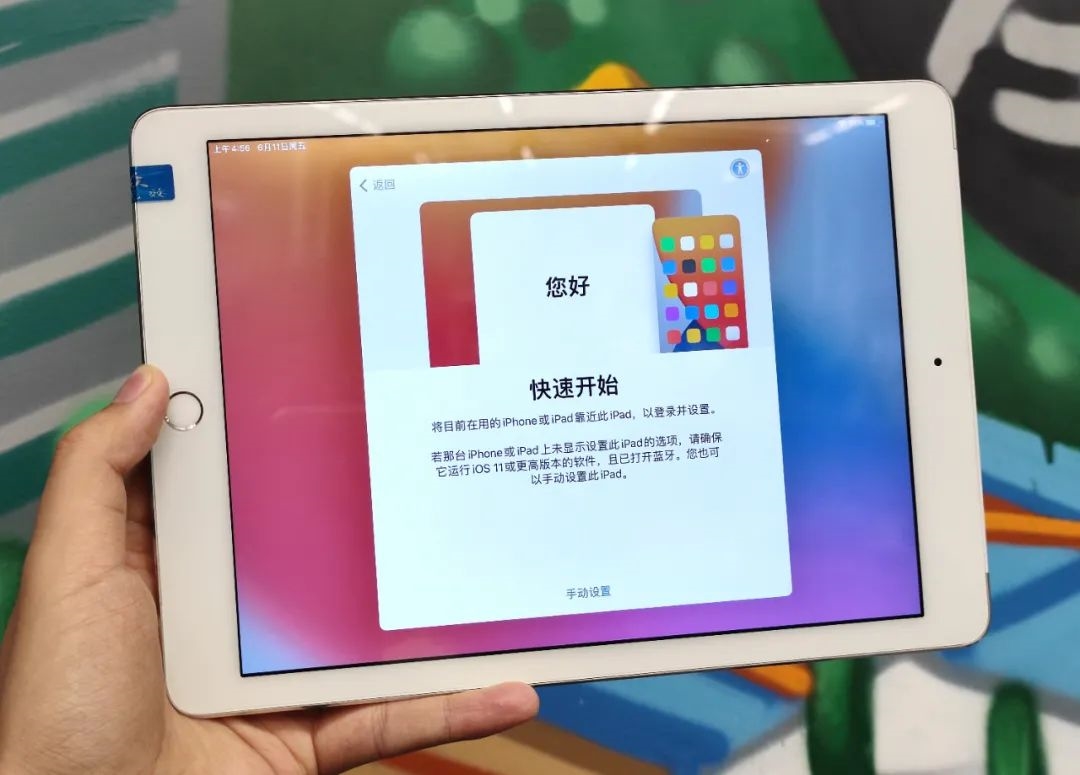 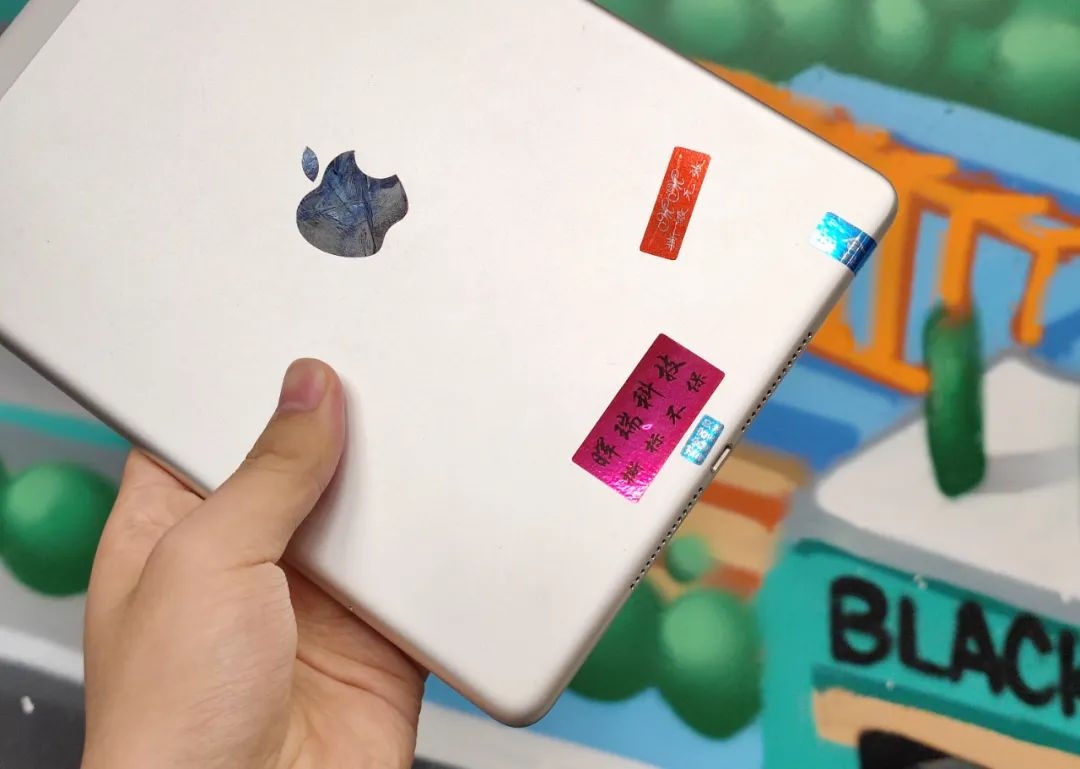 What's more, I'm clearly photographing the WiFi version, but this iPad has a SIM card slot on the side and a partition strip made to prevent metal shielding signals, which means that it not only supports WiFi, but also supports card insertion. There's something wrong with it. 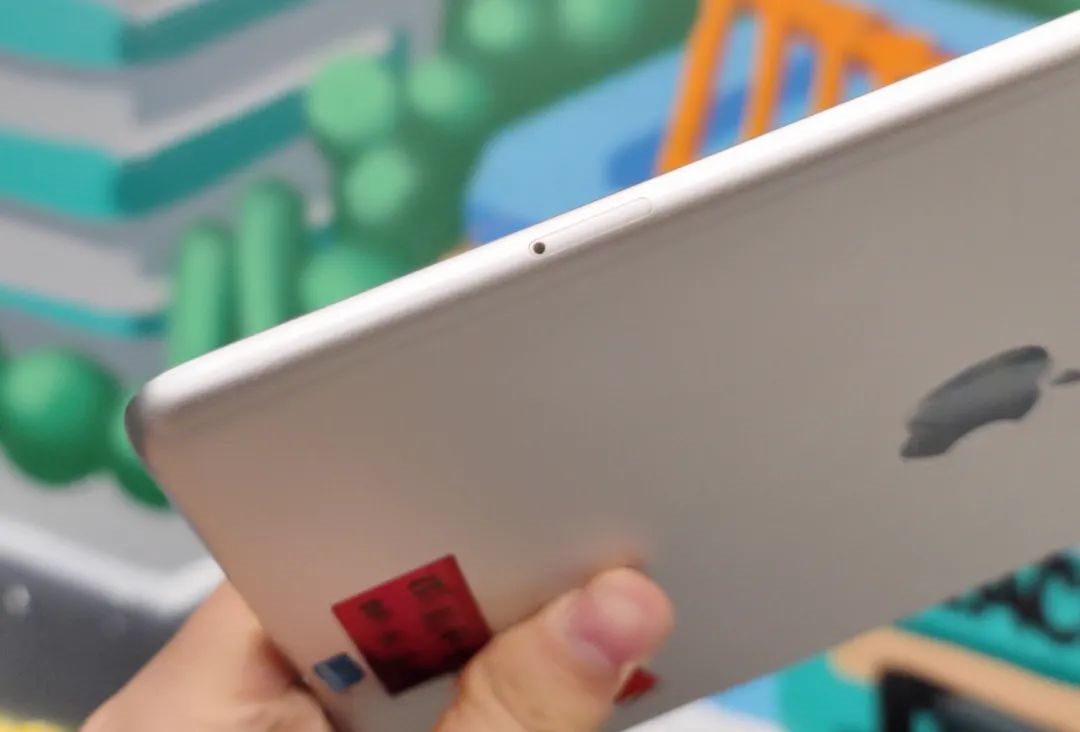 The information about the operator displayed on the iPad also proves that the tablet does support plug-in cards. If it is the WiFi version, there is no such information at all 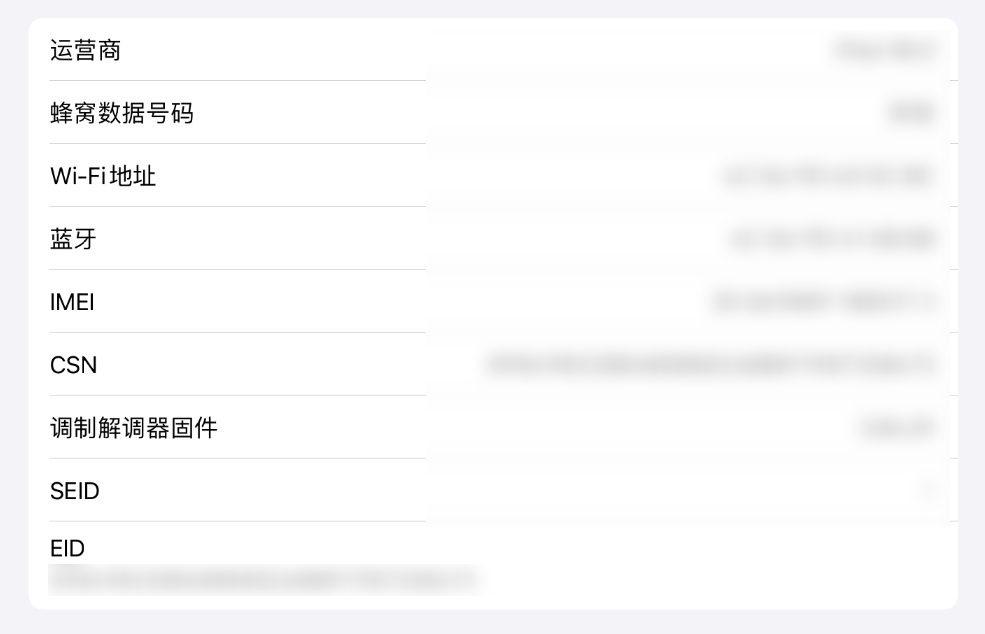 At the beginning, Tony thought that maybe the seller sent the wrong product and mistakenly sent the WiFi version to the plug-in version. However, because it was higher than the configuration I originally bought, he didn't care much, and even had a feeling of earning money~

However, when I installed the description file of iPad OS and prepared to upgrade the system, Tony unexpectedly found that there was no software update interface in the settings of this iPad, which meant that it could not update the system at all!!!

Good guy, this is a machine with problems... 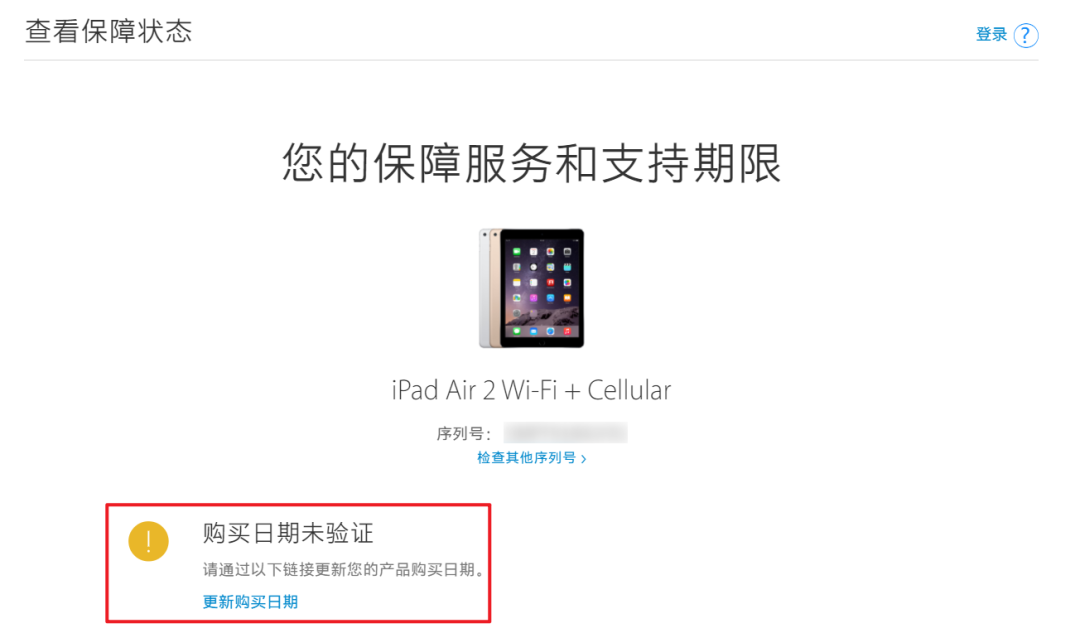 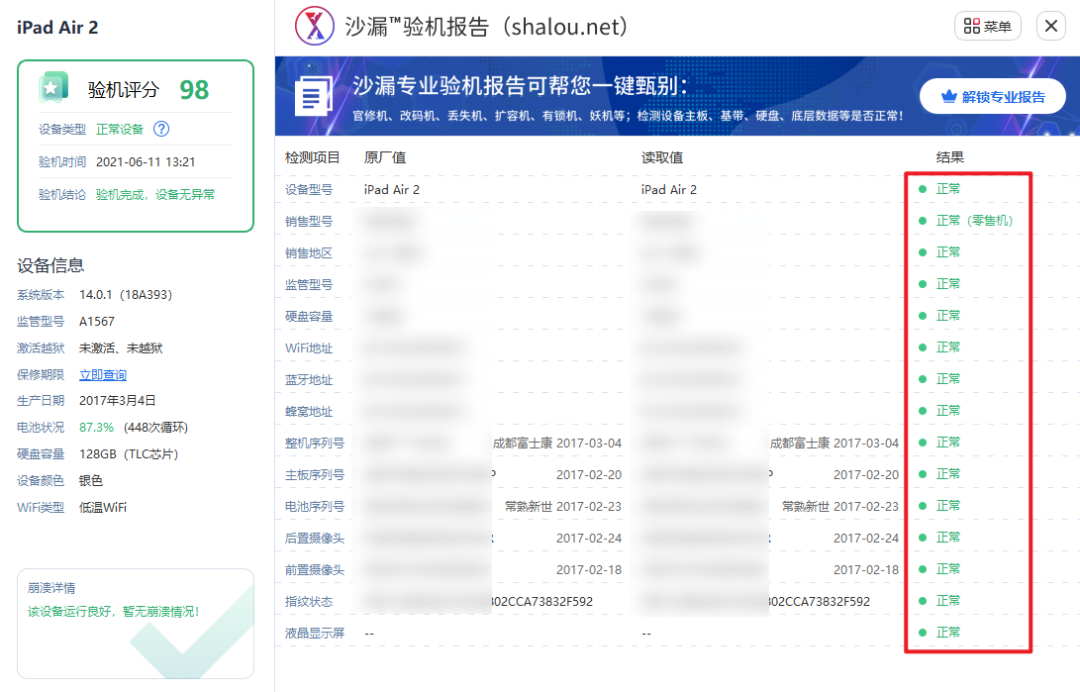 It's the same with ACE assistant. The test results are all green 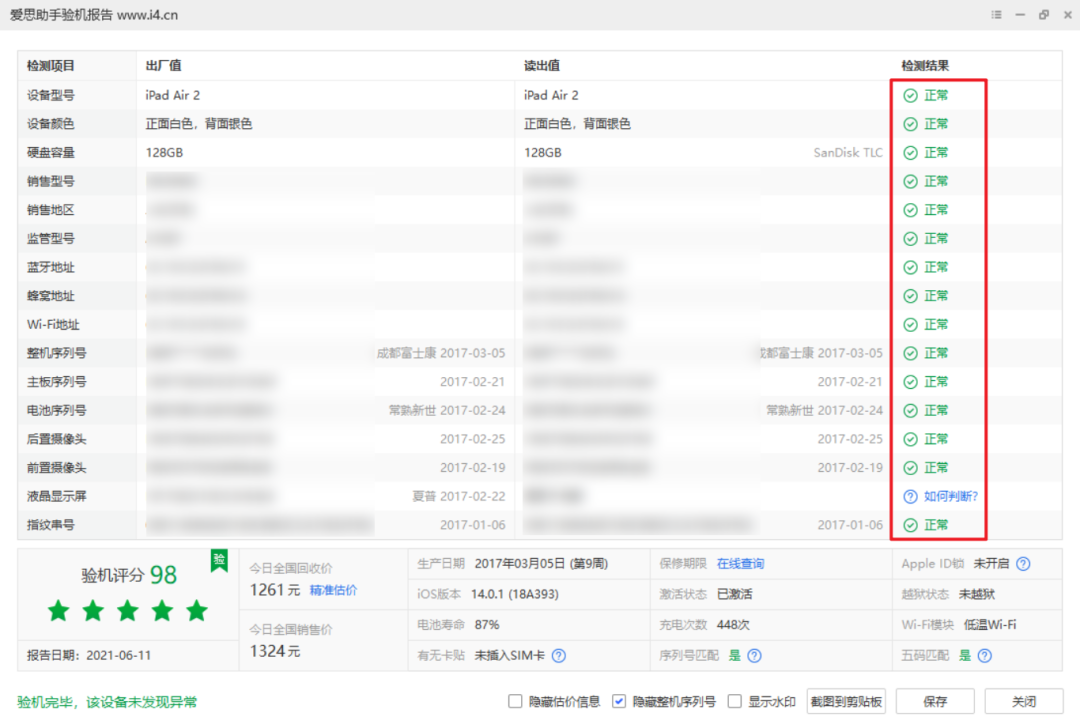 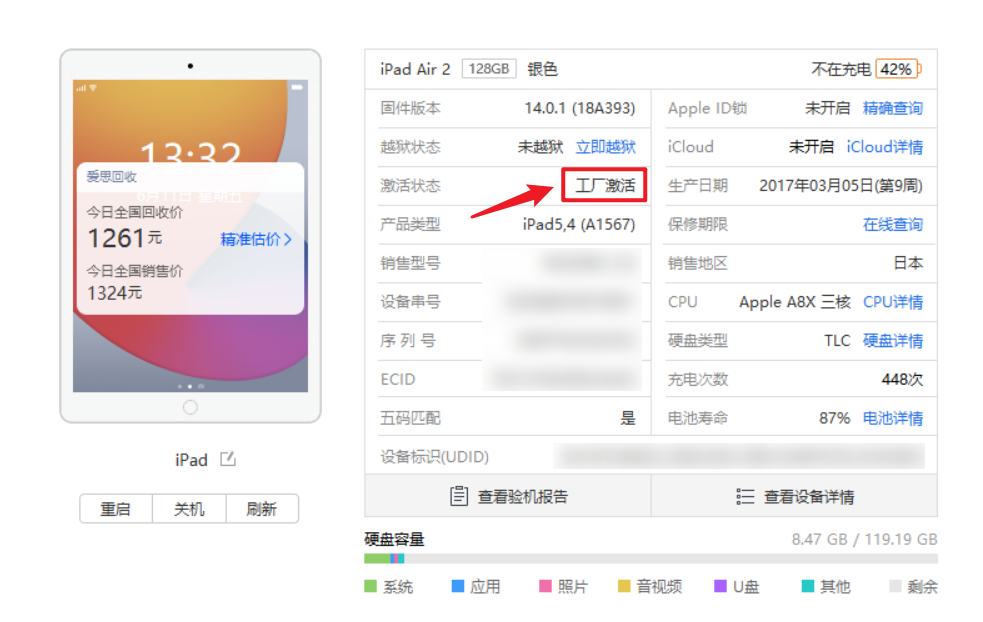 Once the factory settings are restored or the iPad is swiped, it will be locked by the ID lock so that it cannot be used.

Some bad friends may not know what Id lock is.

The existence of Apple ID lock is to protect users' privacy leakage caused by device loss or theft. Only after you log out of Apple ID, can others log in to their own account and use the device normally. 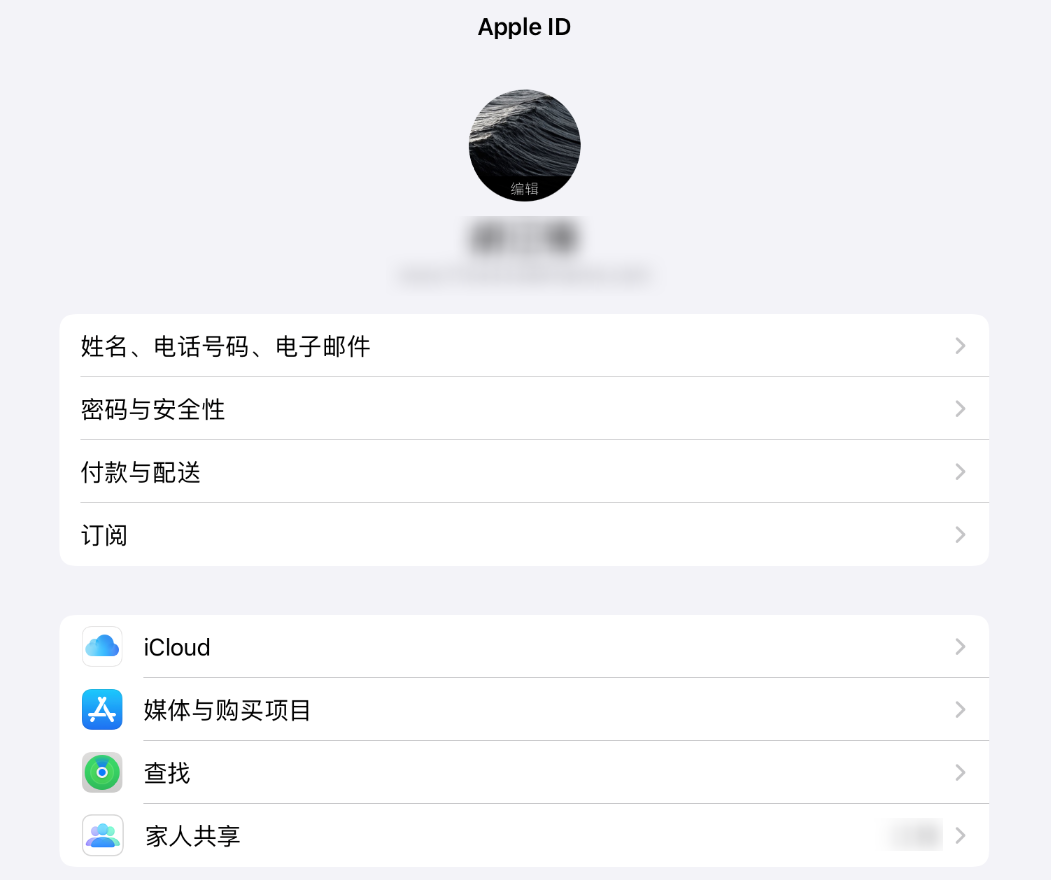 IPads with ID locks are mostly machines of unknown origin, or some second-hand iPads are sold without logging out their Apple ID and closing the search for my iPad. In a word, they are not normal iPads.

In order to verify this statement, the unconvinced Tony also tried to brush it. 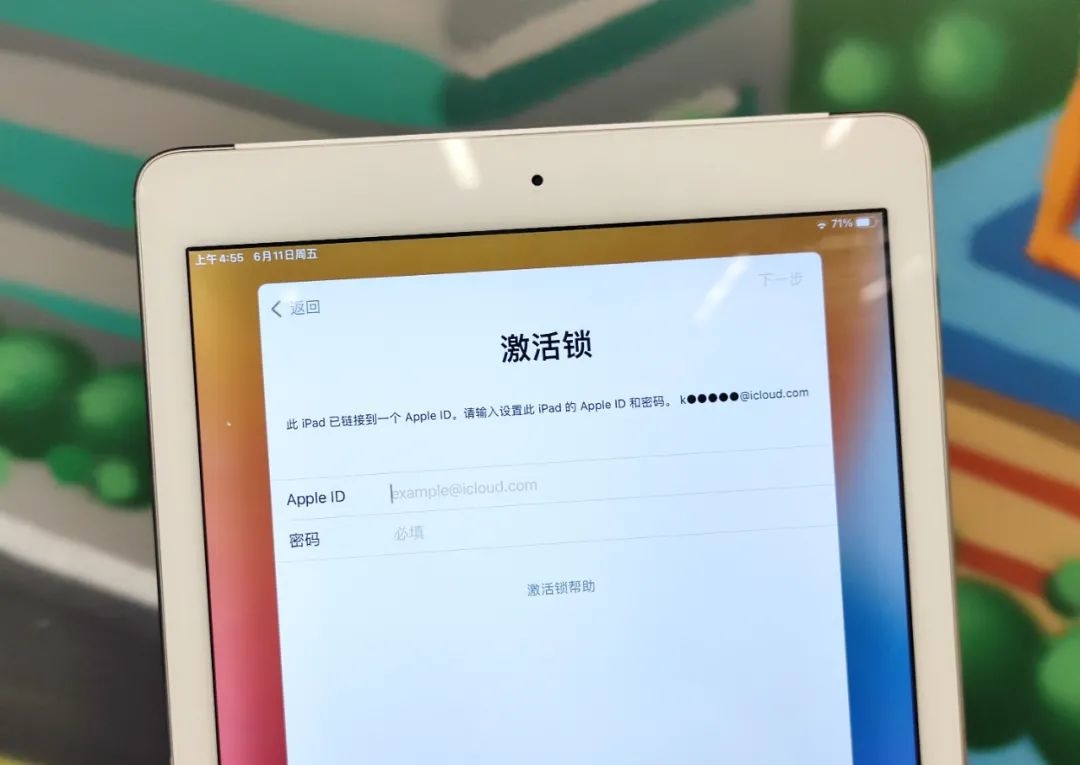 At this point, Tony's second-hand iPad rollover is a sure fact.

In fact, in this process, Tony thinks that the reply from the merchant is also very intriguing.

I asked TA if your iPad couldn't update the system. They explained to me that the system was too much for many games, so they stopped upgrading. If you need to upgrade, you can buy a 4G card version 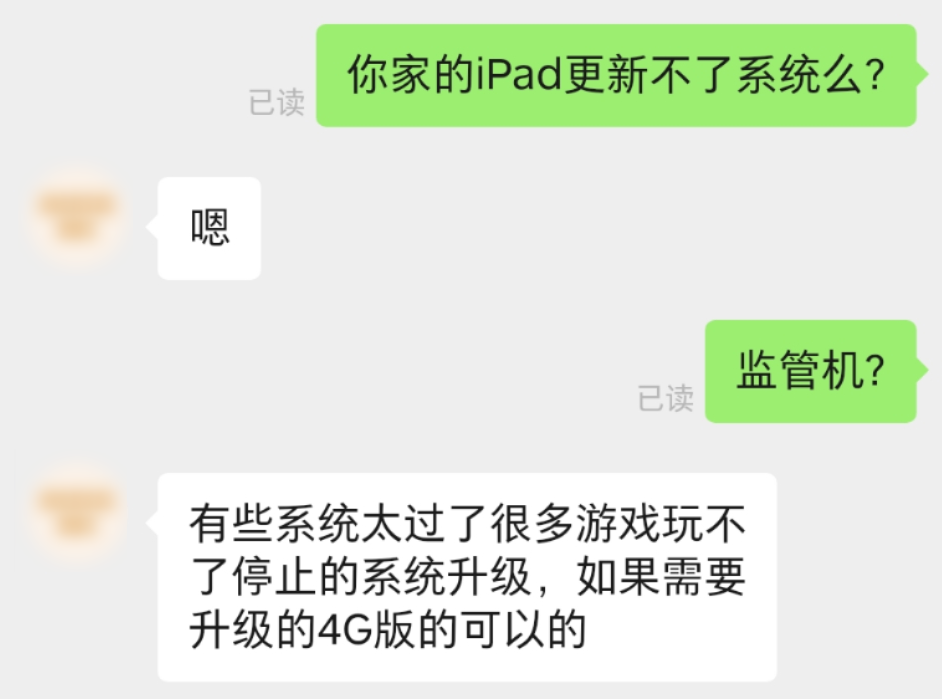 Emmm, shouldn't the new system be compatible with more games, and the system upgrade seems to have nothing to do with the iPad version? 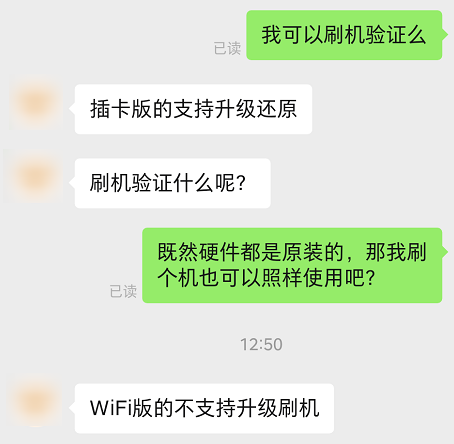 As for why we need to change it, because of the over insurance... What happened??? 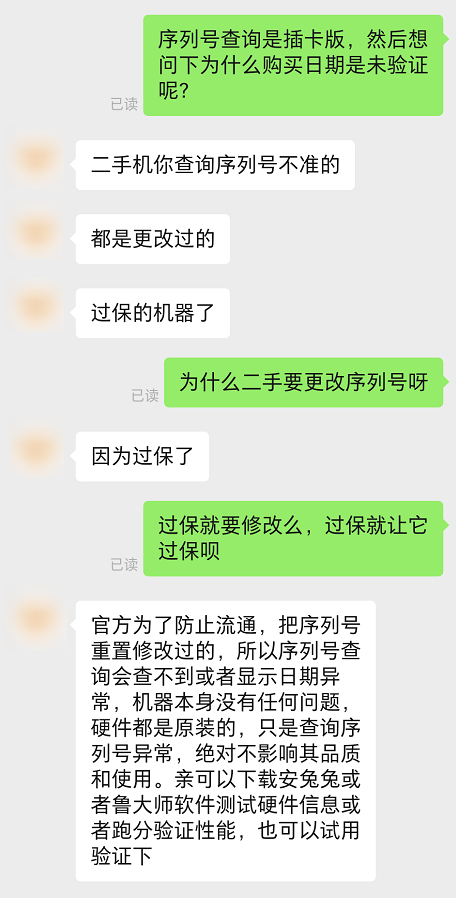 In fact, people who know a little bit about the hardware will see something wrong: if this is a normal iPad, it should be able to restore and upgrade at will, and there is no need for the store to change its serial number because it is out of warranty.

But not everyone has taken the time to understand these gateways, so you will see in the comments area that many people think that as long as the tablet function is OK, runs smoothly, and does not play the game, they will get off successfully. 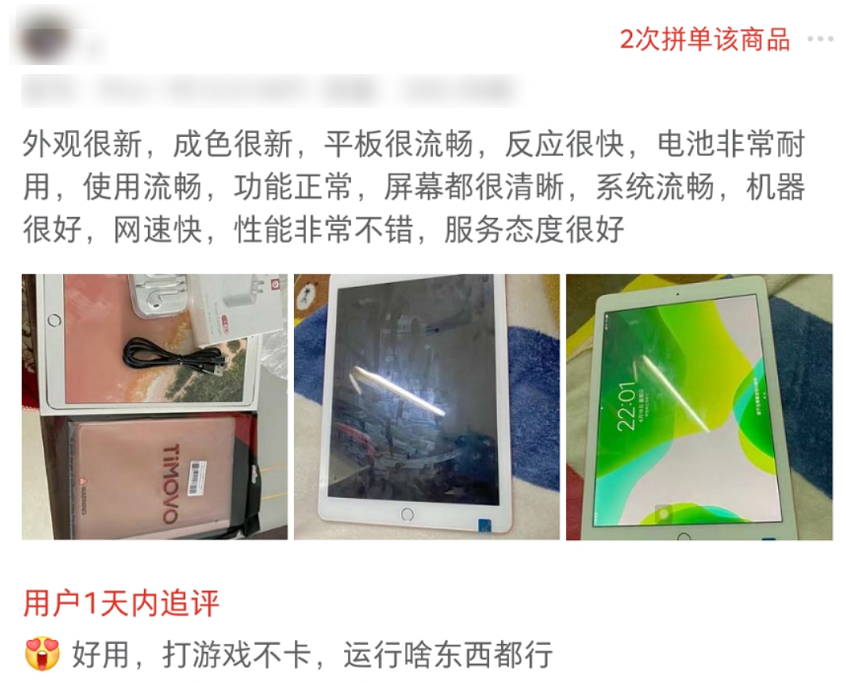 Even if you have some doubts in the process of using, the store owner will convince you with the seemingly plausible words that Tony experienced before.

If you are dissatisfied with the iPad, Ta is likely to tentatively offer you a refund, as long as you can give a good comment: 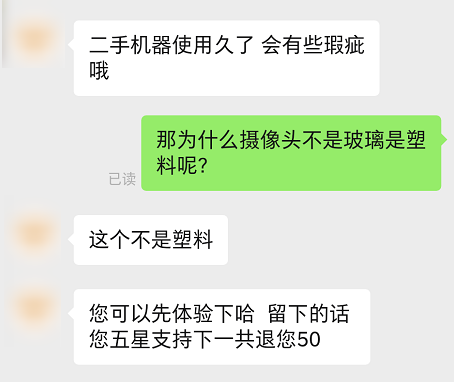 If you can't, or if you meet someone who knows how to cheat you, there are still seven days left for you to return the goods without any reason 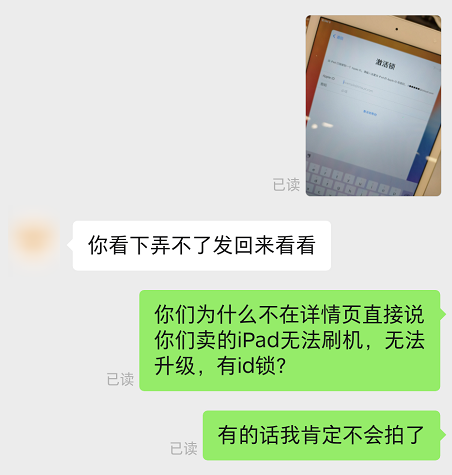 After the whole set of combo fights, almost all the people who should take the bait have already taken the bait; Those who are not hooked will not choose to keep the iPad in the end. These two results have almost no loss to the store.

In addition to the iPad with ID lock Tony encountered this time, there are many problems in the market, such as the expansion of 16g to 128G; Only mainboard is reserved, other parts have changed assembly machine and so on.

For these machines, we can use the GSX activation strategy query service provided by a certain treasure to preliminarily determine whether there is a problem with an iPad. 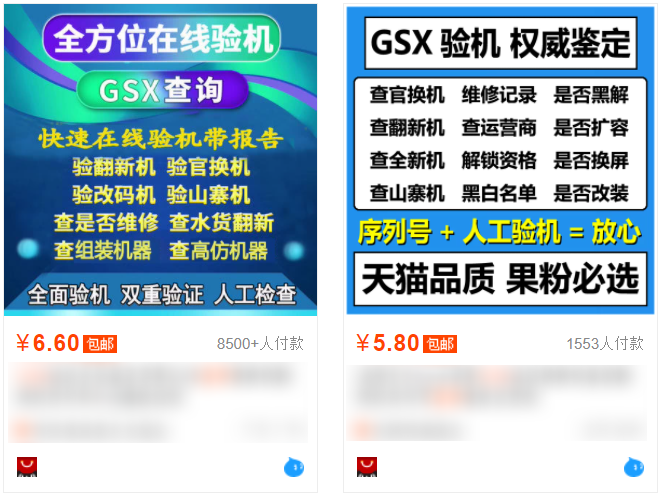 GSX can check the specific activation time, specific model and specification, whether it is an official replacement, whether it has ID lock and so on. 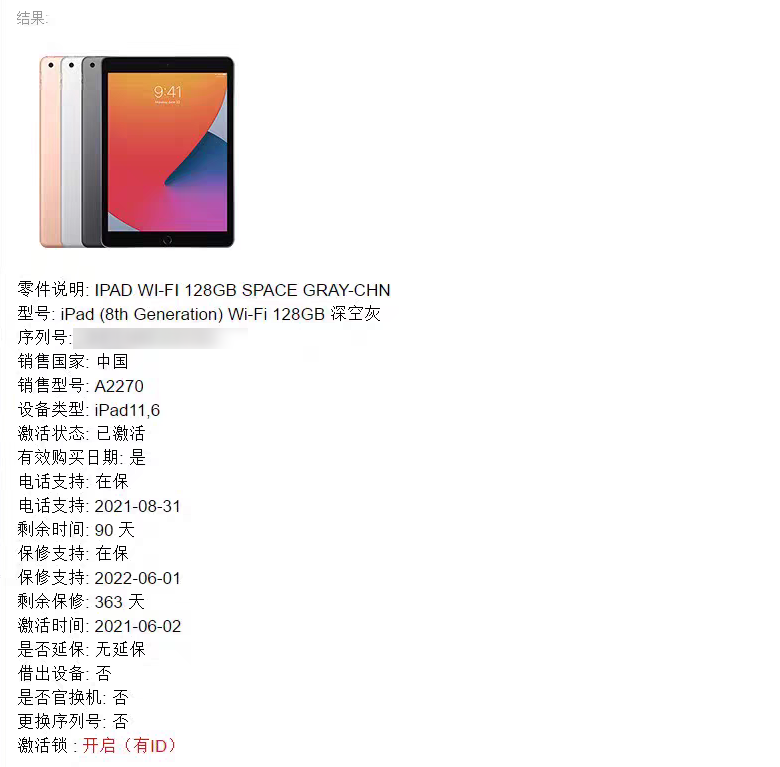 Whenever the query result does not correspond to the machine.

For example, your iPad is actually a silver 128G version, but the GSX query result is a gold 16g version. There is a high probability that this iPad will have problems, and it is likely that someone has replaced the back cover and expanded the hard disk.

However, GSX query is not omnipotent. If you encounter that the hardware information of this iPad has been modified, but all its information is copied from another normal iPad, then GSX can't find out.

In the final analysis, these people are still making use of the black money that we are not familiar with the iPad, and their tricks on the iPad can not be prevented, including the second-hand iPhone.

In this regard, Tony can only say second-hand water depth, bad friends and buy carefully.

These official renovated iPads are different from the new ones in terms of quality and function, besides the packaging box. They can also enjoy the one-year warranty provided by apple. 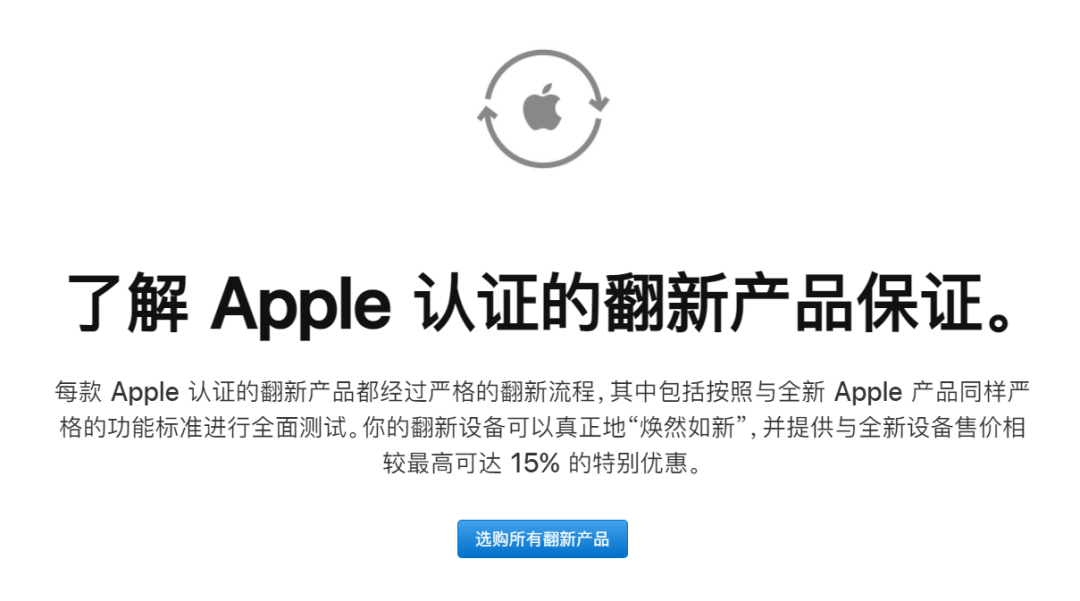 It's just the price. Because it's an official renovation with a warranty, it's definitely a little more expensive than the second-hand ones on the market. Sometimes you can buy it from other channels, and it's not impossible to buy a brand-new machine with the official price. 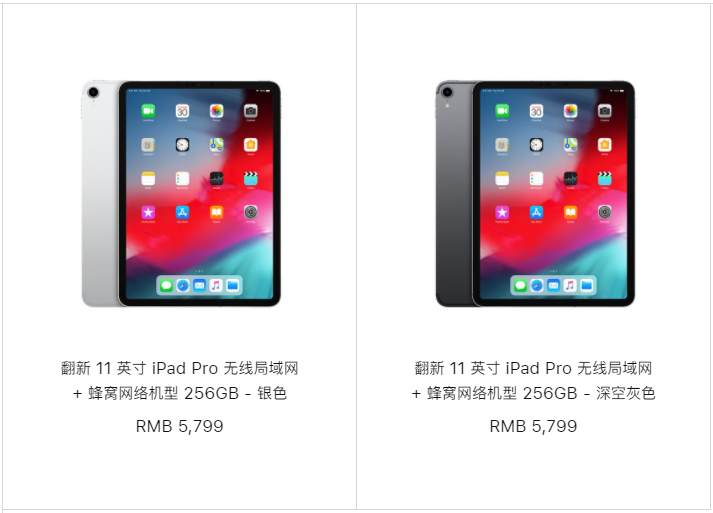 In Tony's opinion, the most ideal situation is to avoid professional second-hand dealers and collect a second-hand machine for personal use. This not only has a small probability of rollover, but also has a much lower price than you can buy an official machine directly.

It is very important to judge whether a seller is an individual seller to see if TA can provide the original purchase certificate of the second-hand iPad, and the certificate should preferably record the serial number of the iPad.

In this way, at least you know the origin of the iPad. Individual sellers usually have no ability to handle the iPad. After receiving it, you just need to check whether the iPad functions normally and whether it has been disassembled or repaired.

Tony collected the 2018 iPad pro from a personal seller a while ago. The seller bought it at the original price of HK $13399, with a small ticket. I started with the price of 4800, and it didn't roll over. It's very cost-effective. 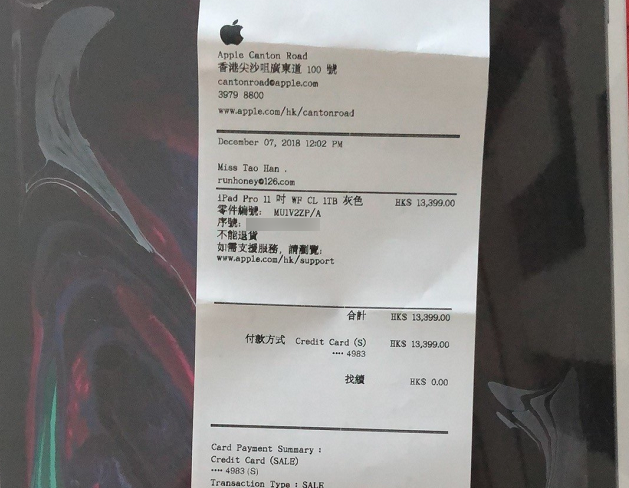 I know that at this time there must be some bad friends who want to ask this price plus a little money can buy 2020 low configuration iPad pro. Why does Tony want to buy 2018?

It's not because the iPad OS 15 system is too mediocre, plus the a12x chip on the 2018 iPad pro, its multi-core performance and graphics performance are better than A14, so I have no reason to buy a new model~

If you're interested, Tony can consider another full issue of the 2018, 2020 and 2021 iPad Pro review. Let's see the difference between the three iPads running the iPad OS 15.

Thank you for watching!

Related news
Looking ahead to the Google I/O Developers Conference in 2019: Can the twists and turns continue to strike back?
Buy Valium Online
iPad Air 4 evaluation: comprehensive screen design A14 bionic chip performance greatly improved
buy pinball machine online
Accidentally, the second-hand iPad I bought on a certain platform overturned
Buy nembutal powder
Hot news this week
Microsoft dev version win11 will not be updated next week or prepare for the new version of android app
Nanjing epidemic spread to Beijing ChinaJoy game exhibition emergency announcement: all members can enter
The founder of Ethereum made $1 billion in counterfeit money for charity: it has shrunk to $400 million before it has arrived
In 2021, four of the top ten films at the global box office came from China: "Hello Li Huanying" became the first domestic film at the box office
Kwai tau: magnetic Taurus creates a one-stop marketing solution for electric business. Taurus service providers offer four incremental values.
All the people are chasing the same champion! Sales of "lucky hair accessories" of Yang Qian on JD platform increased fourfold
Ticket skipping 14 years of space rescue 8 days Russia's "science" successfully docked with the International Space Station
Microsoft: win11 is very popular and the official version will be released as scheduled in the autumn
Jingdong healthy skin repair center went online to help promote the diagnosis and treatment standards of burns and wounds nationwide
Amd radeon RX 6600 XT new graphics card debut set off a small climax on the first day of ChinaJoy 2021
The most popular news this week
The configuration requirements of the seventh legend of the fairy sword and the fantastic Xia are announced: the opening light needs RTX 30 series graphics cards
The game "spiritual opium" was quietly restored by the central media: delete the words "electronic drugs"!
High play challenge Ruilong 5000 APU limit memory performance delay as low as 42ns
Microsoft 365 Home Edition 50% discount promotion
Japanese professor artificially made variant delta virus: more deadly
What is COVID-19's breakthrough infection? Expert: the vaccine protection rate is not 100%
Scientists have confirmed that the ramda strain is more infectious: it can also reduce the protection of the vaccine
Bid farewell to the difficulty of choice. Suning Tesco has a better reputation than parameters and prices
Baidu announces energy conservation and emission reduction report card: help the transportation industry reduce carbon emissions by 10 million tons per year
Who says that only young people love secondary culture? Grandpa and grandma wear Hanfu to play games