Intel DG1 desktop independent graphics card for the first time: comparable to hd7870 nine years ago, power consumption is only 1 / 6

At the beginning of this year, Intel released its first product, code named DG1, to return to the independent graphics card market, which is aimed at the entry-level notebook and desktop market. The desktop was launched by ASUS and recently joined Shenzhen Lanji, but it is only limited to the OEM market and does not retail.

We've seen the design of ASUS DG1 graphics card beforeBenchmark performance of basemarkIt is slightly lower than HD 7850 of AMD 9 years ago and Rx 550 of NVIDIA 4 years ago, which is roughly equivalent to GTX 650 Ti of NVIDIA 8 years ago. 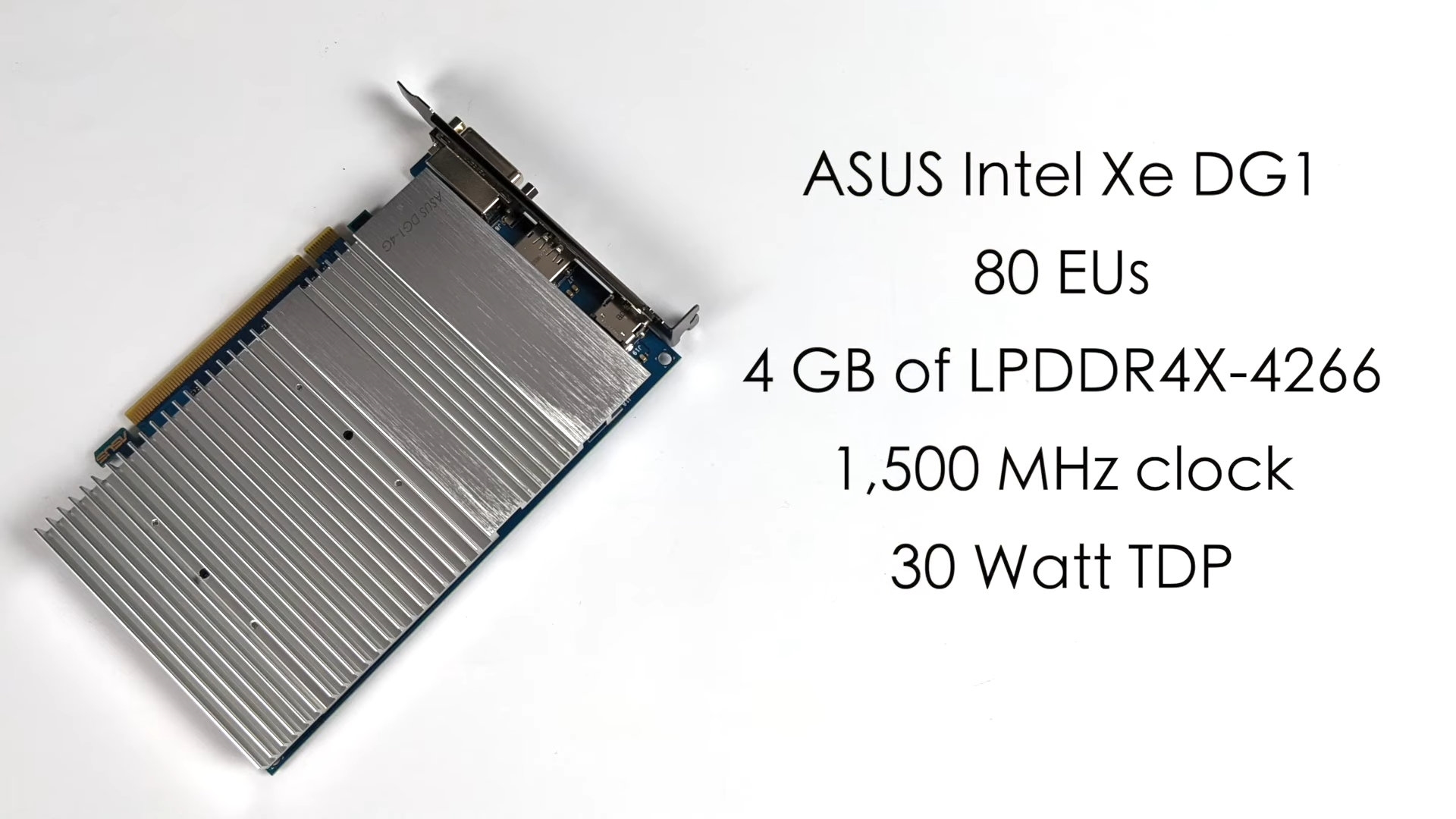 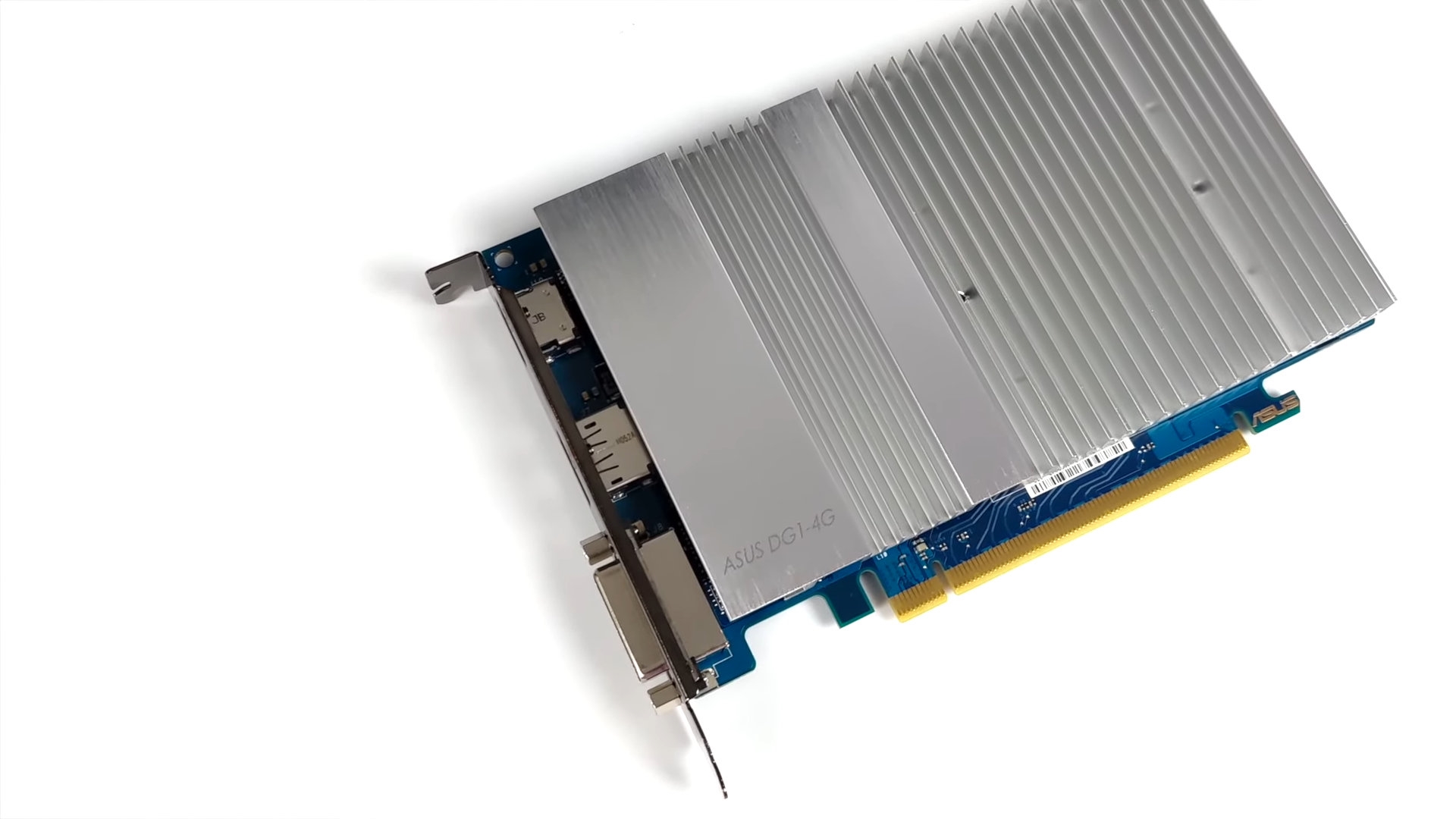 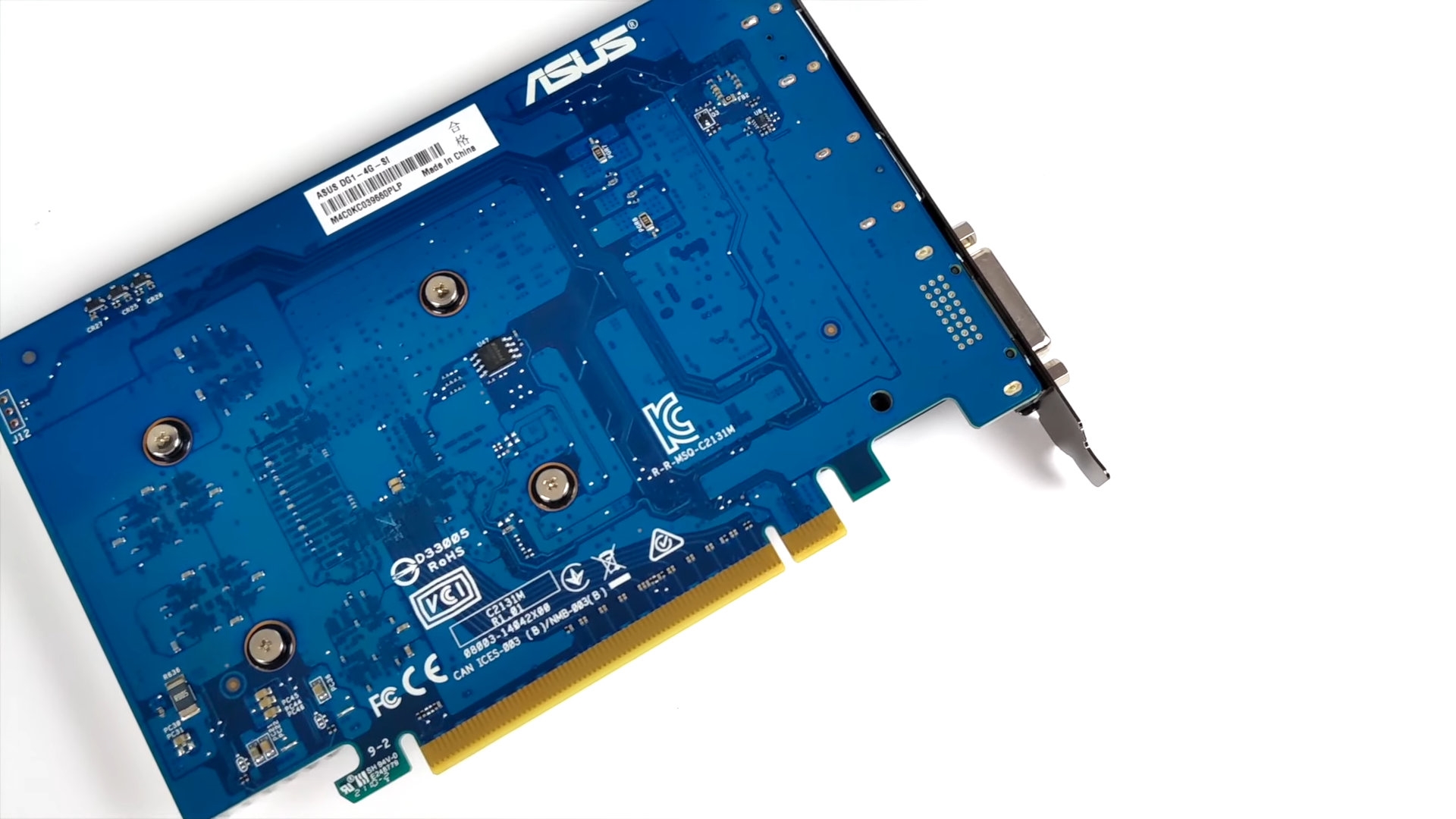 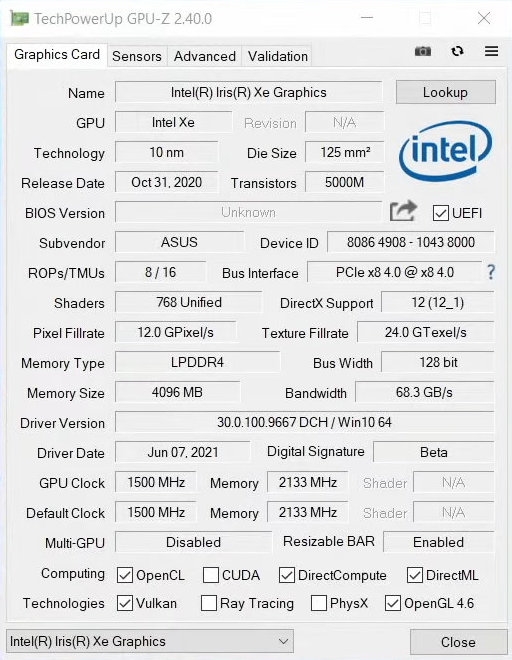 Gpu-z can basically recognize the information of the card, but the number of cores is not right, so it should be80 execution units, 640 cores (shaders)The notebook has 96 units and 768 cores. 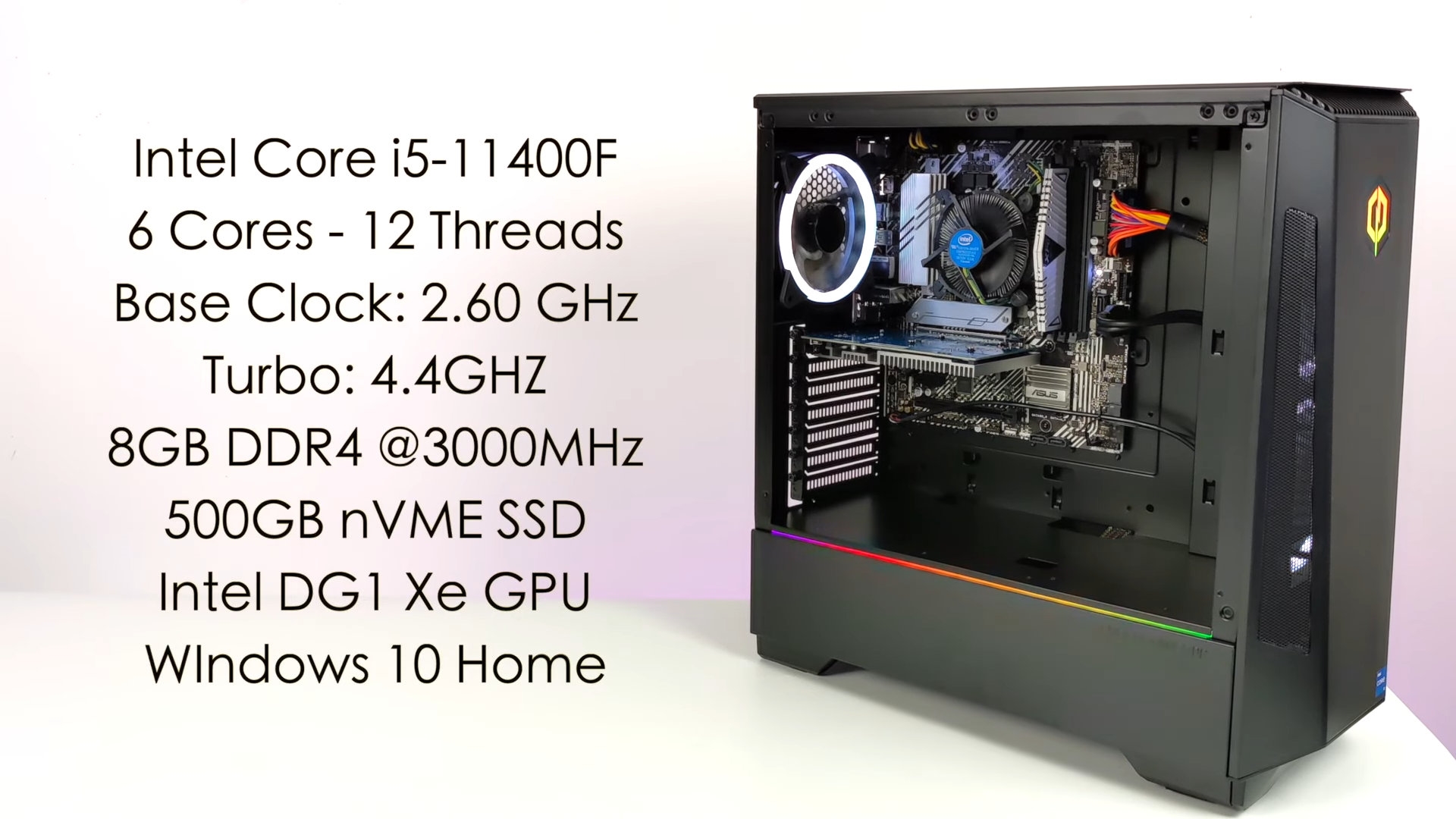 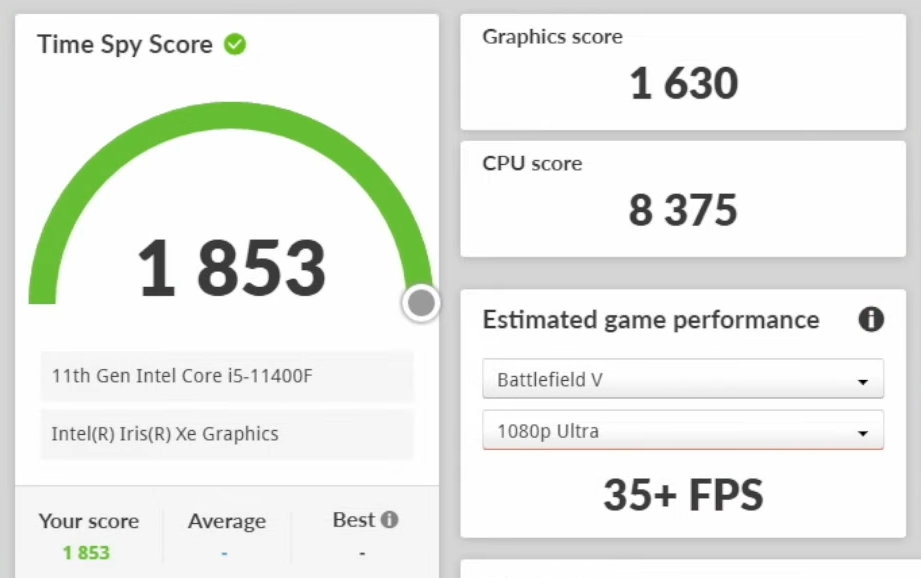 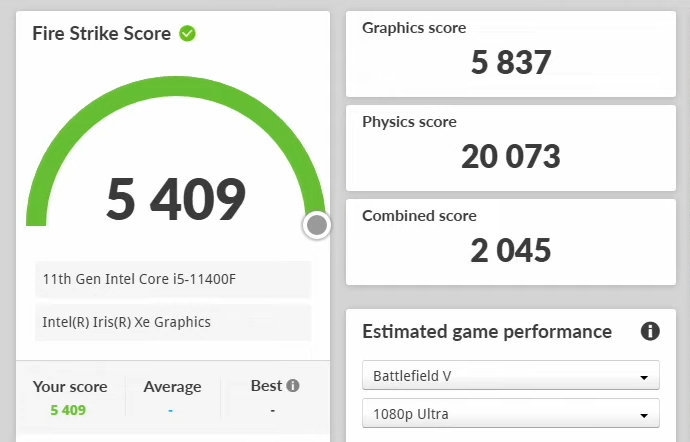 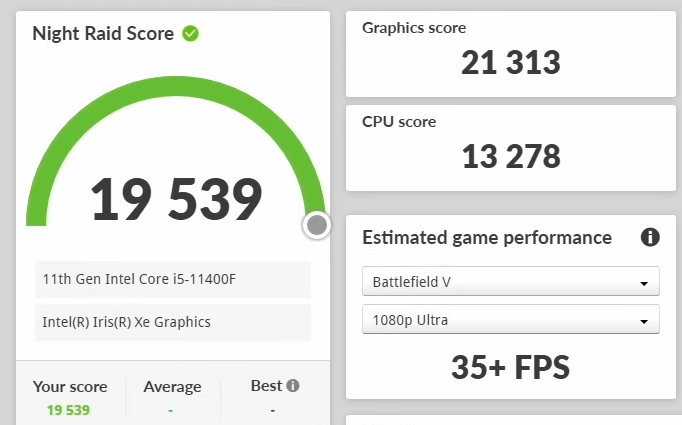 According to the official rankings,This achievement is about 31% higher than that of the 11 generation core Xe G7 with the same 80 units, almost reaching the level of the 7 5700g Vega 8. In addition, it is basically equivalent to the AMD HD 7870 and NVIDIA GTX 760. However, the power consumption of these two models was 175W and 170W respectively, and that of DG1 was only 30W.

The actual game performance is not bad,Under 1080p resolution and low and medium image quality, multiple 3A games can get a stable frame rate above 60fps"Rocket League" this does not eat configuration can run 87fps in high image quality. 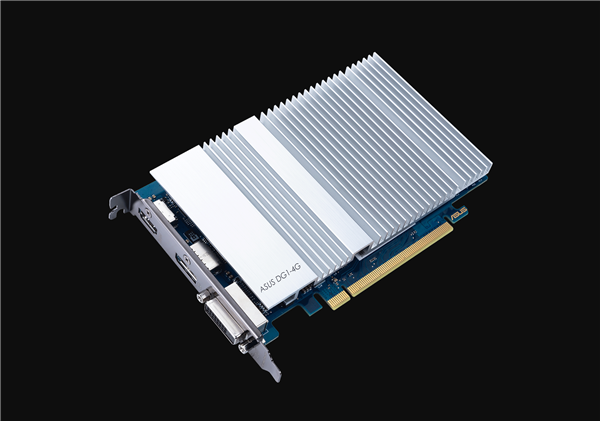 Related news
EEC documents indicate that Intel's first DG1 is expected to quickly seize the entry-level Market
CES 2020 Intel releases several heavyweight products: single display DG1, foldable screen device, automatic driving scheme
Intel DG1 Unique Performance Rundown Exposure: Close to NVIDIA GTX1050?
Intel Xe single display integrated three new technology high-end game card DG2 needs to be 5nm on the stage?
The Linux 5.10 kernel is ready to support Intel DG1 audio output
Intel Xe DG1 GPU has been shipped and will be on sale this year
The Intel DG1GPU will be loaded into separate desktop cards next year for the OEM market
Intel graphics driver officially supports DG1, showing that cyberpunk 2077 no longer crashes
Intel introduces DG1 graphics card based on 10nm superfin for OEM
Intel DG1 desktop independent graphics card for the first time: comparable to hd7870 nine years ago, power consumption is only 1 / 6
Hot news this week
"GTA6" was stolen by a hacker without being released. How can the game company defend the source code?
The new rules of Internet popover will be implemented on September 30, and the chaos of "bully screen advertising" is expected to be eradicated
Google is shutting down its Stadia cloud gaming project, with the developers involved saying they had no knowledge of the plans
Brother sent a mobile phone to pay 200 yuan to pay the owner to the police: money is not scraped by the wind
Mate 50 Kunlun version is in short supply! Huawei additional production capacity: October supply can improve
IPhone6 officially "retired", its series sold 250 million units, second-hand purchase price is now as low as 100 yuan......
After a lapse of 28 years, the Chinese women's basketball team won the World Cup runner -up Li Meng's T -shirt on fire
Woman addicted to 'A Sheep' husband worried about being cheated to report for help: official confession
Apple responds to the iPhone accident monitoring cannot be triggered 100%: no minimum requirements are met
Meituan Wang Xing: Chinese auto companies will definitely win, "NIO, Huawei, ideal" will replace BBA to occupy the high-end market
The most popular news this week
The king of mobile chips is laying off 20% of its headquarters
High -tech warm temperature+5 degrees Netease strict coffee carbon kent underwear 104 yuan
Bi Huawei Mate 50 Pro expensive IP14 Plus Tomorrow: 60Hz screen sells nearly 10,000 yuan
Girls walk to play mobile phone hit telephone pole forehead bulge: hope friends learn a lesson
The Snapdragon 8 Gen2 flagship of the Year is here! The standard battery may not even be 4000mAh
Boot up is the new high-end flagship of Android 13 first look: performance is crushed by iP14
Are you enough? Microsoft announced that all compatible users can upgrade win11 2022
American Infrastructure Revival 8000M Fiber Broadband: The same speed, unlimited upward speed, unlimited
Brazil approves Activision-Blizzard deal
Apple doubles U.S. manufacturing: mostly small-scale test production, only Mac Pro assembled in the U.S.