At the same time, the central bank requires relevant institutions to comprehensively investigate and identify the capital accounts of virtual currency exchanges and OTC dealers, and timely cut off the payment link of trading capital.

Subsequently, Alipay issued a statement prohibiting the use of the company's services for bitcoin and other virtual currency transactions, and will further intensify the crackdown on related transactions from four aspects:

1. We will continue to closely monitor and investigate transactions involving virtual currency, establish an inspection system for key websites and accounts, and block them as soon as they are found;

3. Strengthen the management of merchants, forbid the admittance of virtual currency merchants, and continuously monitor the risk of signed merchants. Once the merchants are found to be engaged in virtual currency transactions, they will be blacklisted, and subsequent cooperation is prohibited;

4. Strengthen the virtual currency risk warning, through the risk pop-up window, message push and other ways to strengthen user publicity and warning education.

Alipay said in its announcement thatWelcome to dial 95188 Alipay service hotline to provide suspicious clues. We will strictly implement the relevant regulatory requirements of the state, abide by the industry self-discipline commitments, resolutely cooperate with the relevant business activities to crack down on the virtual currency, guard against the risks of trading speculation, protect the legitimate rights and interests of customers, and safeguard the financial market order.

Some people in the industry believe that the interview is a further measure taken by the central bank and other regulatory authorities to rectify the cryptocurrency industry, mainly to warn and deter various institutions and players. It is expected that some small and medium-sized players will withdraw. However, domestic virtual currency trading will not be completely eliminated. Banks and other institutions still need to continue to guard against and block related trading activities. At the same time, the central bank also points out the direction for banks and Payment institutions to guard against virtual currency transactions. 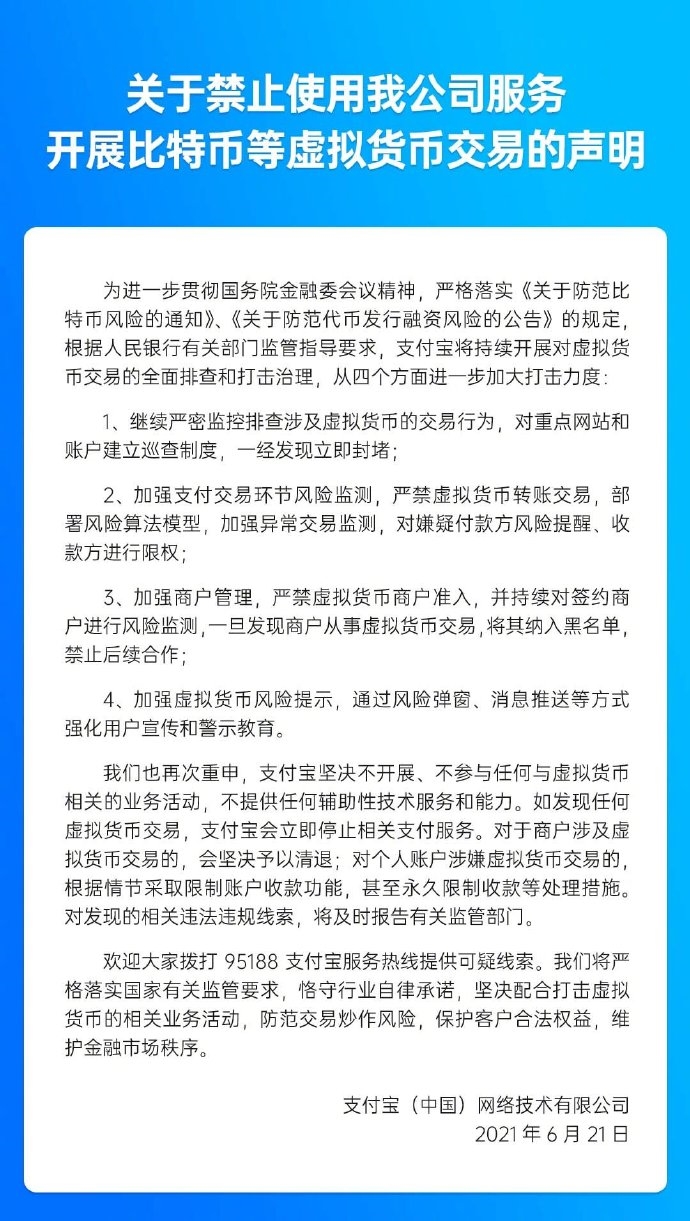 Related news
Prove that there is not a lot of "white washing" gambling sites to "throw" Alipay and WeChat payment.
Alipay prohibits the use of virtual currency transactions if the transaction involves stopping its services.
Alipay forbids virtual currency trading
Alipay and WeChat both blocked "virtual currency": strike hard transactions.
Alipay and WeChat do not support virtual currency transactions for suspected currency events
Didn't the mine run away? Alipay announces increase in virtual currency crackdown
Alipay strictly prohibits virtual currency transfer transaction: welcome to dial 95188 for suspicious clues.
Hot news this week
Microsoft dev version win11 will not be updated next week or prepare for the new version of android app
Nanjing epidemic spread to Beijing ChinaJoy game exhibition emergency announcement: all members can enter
The founder of Ethereum made $1 billion in counterfeit money for charity: it has shrunk to $400 million before it has arrived
In 2021, four of the top ten films at the global box office came from China: "Hello Li Huanying" became the first domestic film at the box office
Kwai tau: magnetic Taurus creates a one-stop marketing solution for electric business. Taurus service providers offer four incremental values.
All the people are chasing the same champion! Sales of "lucky hair accessories" of Yang Qian on JD platform increased fourfold
Ticket skipping 14 years of space rescue 8 days Russia's "science" successfully docked with the International Space Station
Microsoft: win11 is very popular and the official version will be released as scheduled in the autumn
Jingdong healthy skin repair center went online to help promote the diagnosis and treatment standards of burns and wounds nationwide
Amd radeon RX 6600 XT new graphics card debut set off a small climax on the first day of ChinaJoy 2021
The most popular news this week
The configuration requirements of the seventh legend of the fairy sword and the fantastic Xia are announced: the opening light needs RTX 30 series graphics cards
The game "spiritual opium" was quietly restored by the central media: delete the words "electronic drugs"!
High play challenge Ruilong 5000 APU limit memory performance delay as low as 42ns
Microsoft 365 Home Edition 50% discount promotion
Japanese professor artificially made variant delta virus: more deadly
What is COVID-19's breakthrough infection? Expert: the vaccine protection rate is not 100%
Scientists have confirmed that the ramda strain is more infectious: it can also reduce the protection of the vaccine
Bid farewell to the difficulty of choice. Suning Tesco has a better reputation than parameters and prices
Baidu announces energy conservation and emission reduction report card: help the transportation industry reduce carbon emissions by 10 million tons per year
Who says that only young people love secondary culture? Grandpa and grandma wear Hanfu to play games