Huge ostrich and car racing for lane in the street! Netizen: you also need to rush to the morning peak

According to media reports, on the morning of June 21, it was the morning rush hour,A 1.7-meter-old ostrich appears on Foshan Avenue, as if walking in the back garden of his home, and passing vehicles are avoiding.

According to the ostrich ownerHe raised two ostriches, one of which ran away and ran into the motorway this morning. Afterwards, the police conducted a serious education on the owner, asking him to take good care of the animals, so as not to threaten the safety of the masses.

It is reported that the ostrich has been taken back by the owner and presented to Zhongshan Park. The handover has been completed. 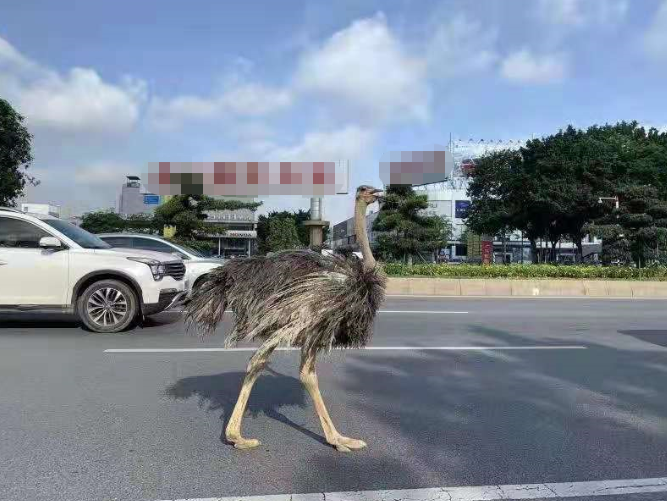 Related news
THANK YOU SO MUCH THE MIRACLE SPELL TEMPLE
I'm highly thankful to you Dr Akhere for all the help you ha
Are you looking for real spell caster to bring back your ex
I NEED MY EX BACK WITH THE HELP OF A LOVE SPELL CASTER 2021
I NEED AN URGENT LOVE SPELL CASTER TO HELP BRING BACK EX HUS
I need an urgent love spell caster to bring back my husband
I need a spell caster to help me bring back my ex lover 2021
Hot news this week
"Used car salesgirl" appeared on the webcast platform: netizens were angry because of their exposed clothes
Ping An Bank's net profit rose 32.5% in the third quarter, Xie Zhiyu crazy reduction, Zhang Kun is a big buy
Xiaomi intelligent clean ecological chain enterprises to pursue technology to complete 3.6 billion yuan C round financing
Microsoft CEO NADELLA is most concerned about three things: ubiquitous computing, AI big model and virtual online
Alibaba Cloud released a new operating system "Dragon Lizu" secret research and development 10 years anger 20 billion
Jia Yueting is paying back the money again! Faraday's future former employees in China receive a pay rise
Internet users ridicule this year's "Double 11" : Taobao "collapse", promotional text messages bombarded, still do not understand the rules
Huawei SEMICONDUCTOR Manufacturing International received export licenses worth hundreds of billions of dollars from the United States
Documents show that Huawei SMIC received export licenses worth hundreds of billions of dollars even after being blocked by the United States
The storage chip faucet is 119 times the first three seasons, the chairman reporter is born, "cattle scattered" did not lose the position.
The most popular news this week
Ali Tencent and other Internet employees by pit miserably! The principal landlord plans to run away with the money in 3 years
Do you agree? Expert: Long vacations should be suspended during epidemics
The biggest electric car order ever! Hertz rental car on-line Tesla Model3: Expensive
Samsung Tab S8 Ultra exposure: Tablet also has Liu Haiping
AMD will launch its new HPC on November 8, a day before Nvidia
Netizens get a 145 yuan Apple new polished cloth Photo: Compatible with all Apple product boxes
Apple "Apple Watch Pro" brand name LOGO exposure
NASA experiment: Astronauts grow organs on the International Space Station for the benefit of humanity
Ten times faster than a supercomputer! Important progress has been made in the study of quantum computing in China
Tesla, with a market capitalisation of trillions of dollars, will catch up with Amazon, and Musk's fortunes are up four hours a day