In the first quarter and the second quarter of this year, AMD and Intel successively released the sharp dragon 5000U / h series mobile APU and the 11th generation core h45 series processor, with excellent performance in all aspects. However, it has always been difficult to reach a conclusion on which of the two processors is more suitable for playing games.

After all, notebook platform is different from desktop platform, and the performance of game book is subject to internal heat dissipation, processor power consumption and BIOS settings. Even two laptops that seem to have the same hardware configuration specifications will have great differences in actual performance, so it is difficult to accurately compare the game performance differences between different processors. 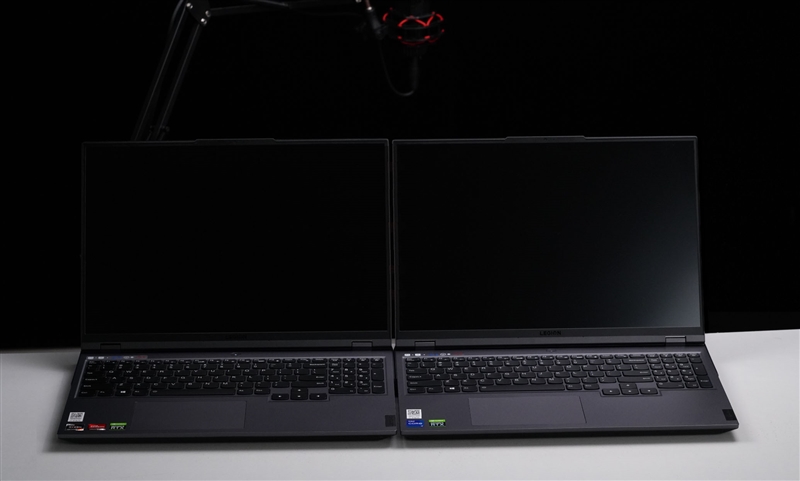 Fortunately, there are as like as two peas in the market, namely Lenovo's rescuer Y9000P and the rescuer R9000P, which are almost identical to the other parts, including heat dissipation, mold, graphics card, etc., except for the A/I which is adopted by the processor respectively. A/I

In view of this, we have chosen these two laptops to conduct a comprehensive game performance test to see which one of AMD and Intel's new generation mobile processors has stronger game performance! In this article, let's first look at stand-alone games.

The detailed parameter specifications of Savior y9000p and Savior r9000p are as follows: 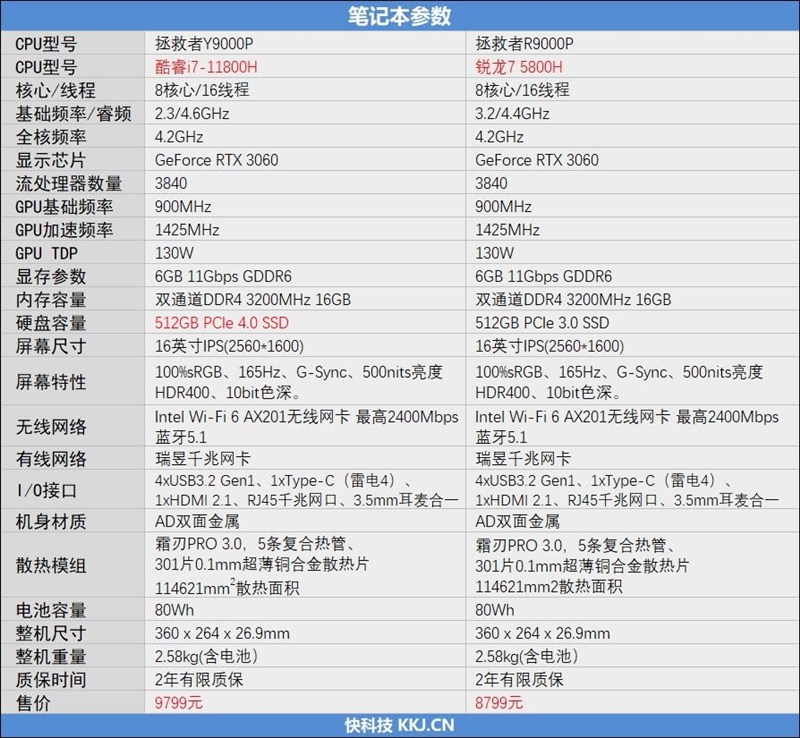 The 2 rescuers as like as two peas in SSD, are almost identical in configuration. Even the radiator is the same frost blade Pro 3. There are 5 heat pipes, of which the main heat pipe is 10mm diameter and the heat dissipation area is 114621mm2. 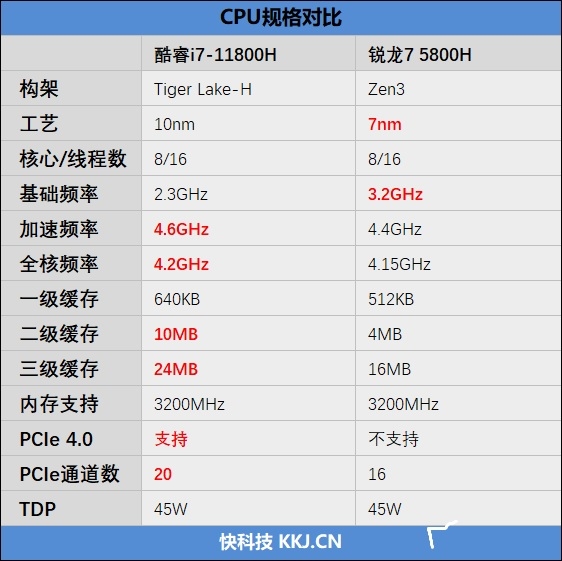 Core i7-11800h adopts Intel's latest 10nm process. Although it seems to be inferior to 7Nm in number, we all know that Intel's 10nm is not inferior to TSMC's 7Nm and Samsung's 5nm.

Although the sharp dragon 7 5800h is also based on the zen3 architecture, the difference between the sharp dragon 7 5800h and the desktop version is that the three-level cache capacity is cut to half, but there are still 16MB. Moreover, it adopts a single CCX design, and each core can access all the 16MB three-level cache. In contrast, each core of Ruilong 7 4800h can only access 4MB Level 3 cache.

In addition, due to the reasons of controlling the crystal area and heating, the sharp dragon 7 5800h does not support pci4.0. The processor has 16 pci3.0 channels, of which 8 are for the graphics card and the remaining 8 are for the SSD.

Here are the screenshots of the two notebook gpu-z: 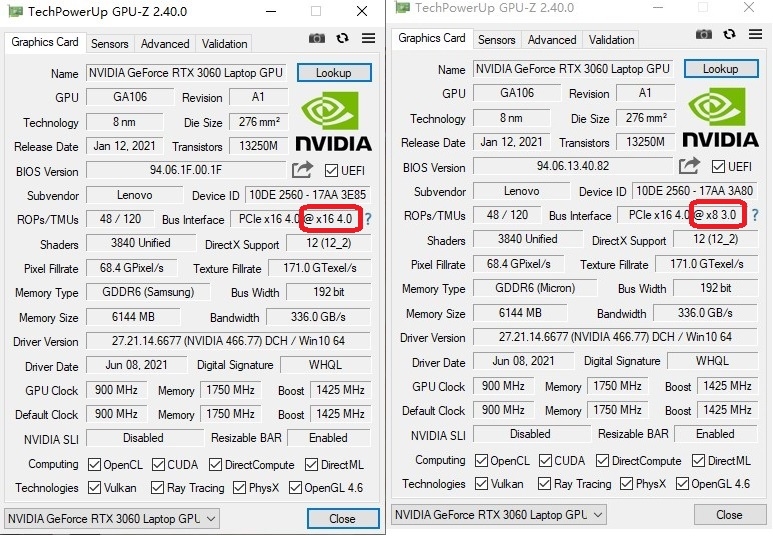 The GPU power consumption of the other two laptops is 130W.

Now we test the heat dissipation capacity of the notebook in automatic mode: 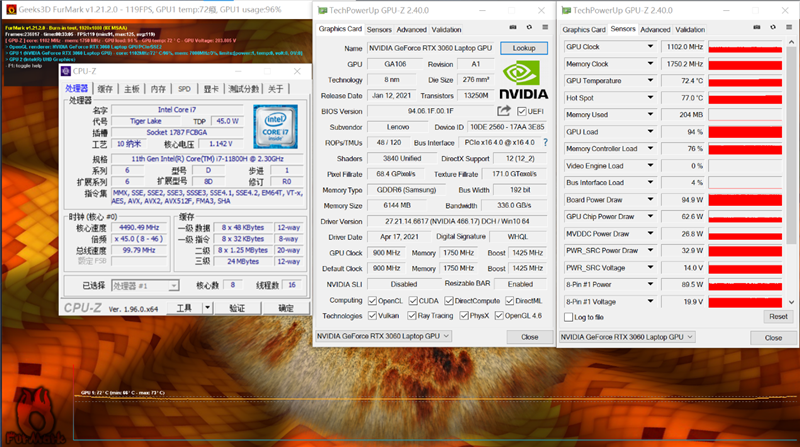 This is the rescuer y9000p. After running Furmark for 30 minutes, the power consumption of the processor is 95w and the temperature is 72.4 degrees. 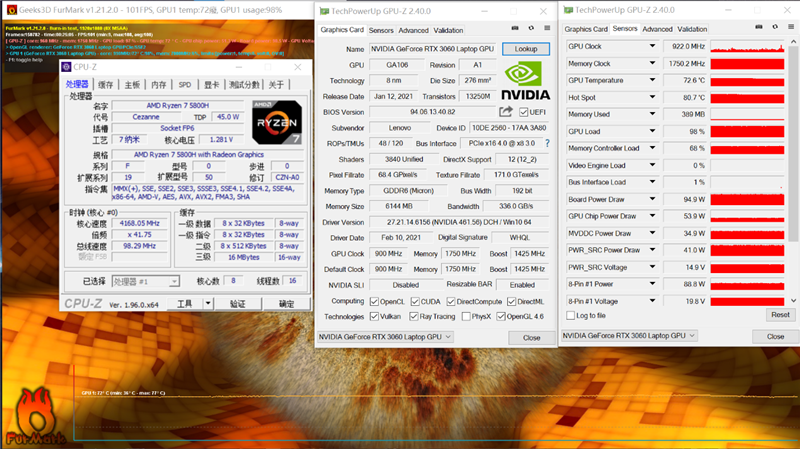 This is the Savior r9000p. After running Furmark for 25 minutes, the power consumption of the processor is 95w and the temperature is 72.6 degrees.

From the toaster test, we can see that not only the GPU models and specifications of the two laptops are the same, but also the heat dissipation capacity is the same. Therefore, the comparative test of the game performance is relatively conducted under very fair conditions.

Related news
Lenovo announces sharp dragon 5 4600h performance: multi-core performance surpasses core i7-10750h
Intel i7-10870h / i5-10200h: Game Book frequency reduction is more expensive
Core i7-11800h vs. sharp dragon 7 5800h vs. 18 stand-alone games: unexpectedly, it's one-sided!
Core i7-11800h vs. sharp dragon 7 5800h vs. 18 stand-alone games: Intel easy one side
Core i7-11800h vs. sharp dragon 7 5800h game performance comparison: second kill or anti kill?
A / I game online game performance comparison: i5-11400h leapfrogging vs. Ruilong 7 5800h!
Hot news this week
Alibaba launched a new cross-border e-commerce platform in Spain, aiming to operate independently in the middle and high-end market
It's not just Huawei! Beidou has penetrated more than 20 industries and applied more than 15.5 million products
The appearance of Xiaomi's mini console is revealed for the first time: an all-metal body with a strong apple smell
Apple is recruiting neurorendering research scientists to create immersive experiences for AR/VR products
Guo Ming ð «  creates: apple MR head or extended to the second half of next year, mass production shipment is less than 5
Breaking the spell of "Android 3 year must card", the new Breguet mobile phone will be sold for the first time tomorrow: from RMB3499
When pure water is used in China team to solve the problem of seawater hydrogen production: it is expected to become an original industry
The United States, the most powerful chip designer, now has a crisis: it is shooting itself in the foot
Manufacturers like Samsung and Xiaomi have been affected. Google has revealed a dangerous flaw that threatens millions of Android devices
Be careful with your phone for a long time! The aunt played with her mobile phone so much that her fingers got stuck
The most popular news this week
Standard iP14! This is the no-miss flagship Mi 13 Series: a big upgrade compared to 12/12S
You know what? Looking at your phone while driving is the equivalent of driving blind for about 50 meters, which is extremely dangerous
The United States has approved the first fecal transplant to treat disease by transplanting someone else's feces
Amazon has withdrawn a new offer from its retail division, cutting off new employees who were due to start early next year
Apple has delayed the launch of Apple Pay in South Korea due to a local censorship clause
Dalitsu, a lens supplier for Apple's iPhone 14, reported revenue of NT $5.231 billion in November, up 20 percent from a year earlier
Apple is considering making some iPad models In India
An international first! The experiment of space culture of complete life cycle of rice was completed
Musk's brain-computer interface company Neuralink was revealed to be the subject of a US federal investigation, just four days after releasing a timetable for human trials
Microsoft said the acquisition of Activision Blizzard would help the game industry innovate