Why is HDMI always slow? On the use environment and development of HDMI and DP

HDMI and DP have different development stages. However, if we select dp1.2 and hdmi2.0 with similar speed, we will find that the former was released in 2009 and the latter in 2013-14.

Also in 2014, DP protocol has been upgraded to 1.3, and officially released two years later, using the dp1.4 interface.

It is said that dp2.0, which has issued standards for 19 years and has been skipping tickets for nearly two years, is in the development stage and may be listed at the end of this year;The legendary HDMI 3.0 is still in the process of formulating standards. In other words, it does not exist, and even the concept is incomplete.

So why is HDMI always a generation behind DP in performance? Why is HDMI more popular than DP? I think these two phenomena are related to the characteristics of HDMI itself.

HDMI is widely used in TV, player and other fields, and its inheritance to VGA, DVI and other interfaces is inseparable.

It sends picture information line by line, so its rate can be defined by the pixel transfer rate (mpxps), which results in the limitation of the maximum screen resolution and refresh rate of each generation version. Of course, the more common rate description is bandwidth, that is, Gbps mentioned above.

This characteristic determines that it can replace analog signal VGA, the previous generation of digital signal DVI and other interfaces, and also has the new advantage of integrated audio signal.

For old equipment, it is easy to use to transfer to new equipment; For new devices, no principle of simultaneous interpreting is needed, which enhances the economy and the universal use of this interface. This is the foundation of its popularity. 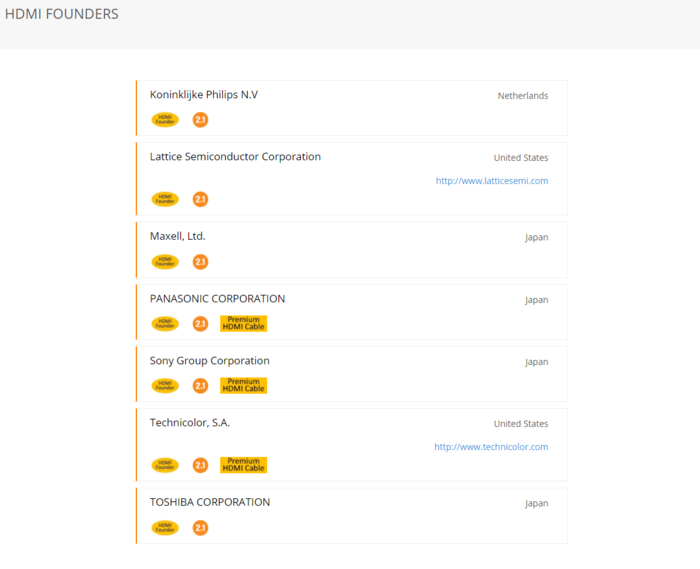 The great influence of the founders of HDMI, such as Panasonic, Toshiba, Sony, Philips and Teyi, including major industry supporters, such as fox, Warner Brothers, Disney and Samsung, is also an important reason for its popularity.

Then a more fundamental answer is in sightMost of the home audio-visual users, including the audio-visual industry, do not need such a high transmission bandwidth.

The same example also appears in the field of home audio-visual. Even in the aspect of Blu ray playback (there is a common misunderstanding here that Blu ray is not a picture quality but a CD-ROM reading and writing method), after reading and transcoding, the video signal transmission capacity will not exceed the HDMI capacity, because the resolution and frame rate range within the industry standard are still the reasons.

From this point of view,

On the other hand, different from the audio-visual industry, which pursues standardized presentation, PC display field has always been pursuing higher display standards. This trend is driven by user requirements and the progress of software and hardware. Resolution, frame / refresh rate, HDR, color depth and other familiar parameters are closely related to the interface transmission rate.

Therefore, DP is constantly being promoted by the progress of hardware level. There is even a dual DP line connection scheme between dp1.4 and dp2.0, which is not yet practical, to achieve the transmission rate of 4k144hz display standard.

The future development of these two interfaces is prospected. Needless to say, according to the standard of dp2.0, DP has set aside 3-5 years of performance redundancy, but it needs to be further popularized.

And HDMI, which is lack of pressure, is still moving forward slowly, which is understandable.

With the popularity and power behind HDMI, even if its performance is backward, it will not be replaced. However, the opportunity for its large-scale replacement may only come with the wide-ranging update of the standards of the entire film and television industry. Unlike DP, it is not a few PC fever players, but billions of TV users around the world.

Take the film industry and home Blu ray broadcasting for example, although the traditional frame rate of the industry may remain unchanged for a long time.

However, the adjustment space of resolution is unprecedented and even far beyond that of PC display. The theoretical limit of resolution that top IMAX video cameras can shoot is up to 16K, and the film will be about 4K after digital processing. If the industry thinks that the projection resolution and the new Blu ray standard should be increased to 8-10k in the future, it is believed that it will add more chips to the arrival of the next generation of HDMI.

Related news
NVIDIA g-sync display will be open to support HDMI interface: players like da Pu Ben
Sony released Xperia pro, a broadcast level professional video phone, with HDMI input interface
2.0 interface is behind! ASUS Rog announces the world's first HDMI 2.1 certified display
Sony product manager: HDMI 2.1 interface is not just needed by ps5 host
Who is the best choice for gamers: DP vs HDMI?
Philips show HDMI acousto optic synchronizer lights up family entertainment space with full scene light
DP interface is no worse than HDMI and even free. Why don't TV manufacturers use it?
Why is HDMI always slow? On the use environment and development of HDMI and DP
Hot news this week
Performance exploration of Apple A15 processor: CPU standing still compared with A14 and GPU increased by 38%
Tencent announced that WeChat open external chain declaration followed the four principles started to execute on September 17
IPhone 13 dominates the hot search list experts: there are no hammers like apple that cause widespread discussion for free
Huawei matebook's new product is equipped with windows upgraded version of Huawei application market and supports running mobile applications
Jingdong health "National Health season" is about to open. The Mid Autumn Festival gift is as low as 50% off and 20% off every 200
Jingdong opened its first super body store in Indonesia, making "China service" as loud as "made in China"
Netease cloud music released a new "villager card" to strengthen user identity and deepen the attribute of cloud village community
The host roasted and ate a pet pig that had been kept for 100 days and came back to life in less than 10 days
Jingdong sports outdoor super product day massive discounts come to see Bao Chunlai and Kan Meng interpret the new way of live broadcasting
Netease game three prevention, three treatment and two special actions were fully launched to protect the healthy growth of minors
The most popular news this week
The first round of iPhone 13 opened apple market value evaporated by 300 billion yuan overnight
UN secretary-general slams Bezos, Branson: Many people are starving and traveling in space
Supply chain news: Apple's AR head is expected to go on sale next year
Win11 will not refuse the old computer, but Microsoft may let you sign abandonment books.
Apple iOS 15 will update verifiable health records
Early FENG: Apple releases the first beta/macOS Monterey Beta 7 release of iOS 15.1
In addition to getting started ‌iPad‌ and iPod Touch Apple is close to phasing out the headphone jack on iOS devices
Facebook announces portal Go to punch iPad, kick Amazon Alexa?
Apple: Macos Monterey needs Xcode 13
Apple turns off iOS 14.7.1 authentication to not allow users to degrade