The first shot was 10.05 seconds in the preliminaries and the second shot was 9.83 seconds in the semi-finals, breaking the Asian record and successfully reaching the finals!

Su Bingtian became the first Asian player to break into the Olympic men's 100m finals in the era of electronic timing, and became the pride of China and even the whole Asia. 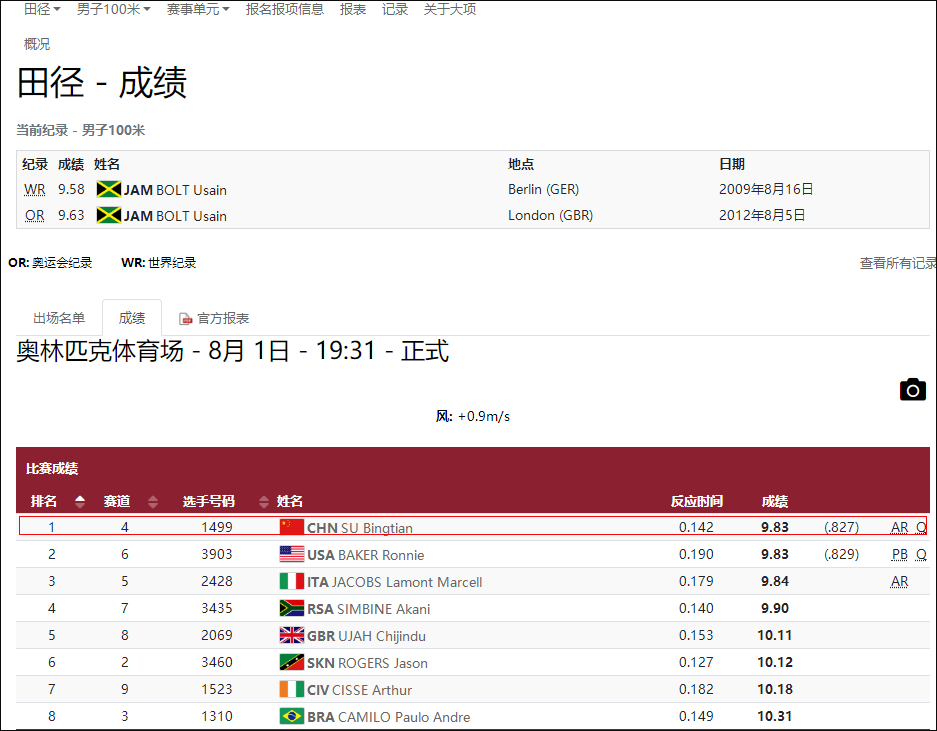 In the final two hours later, Su Bingtian ran out of 9.98 seconds, broke through the 10 second mark again and won the sixth place in the final!

According to the semi-final results, Su Bingtian can get a medal (Italian Jacobs won the gold in 9.80 seconds), but at this moment, it doesn't matter. 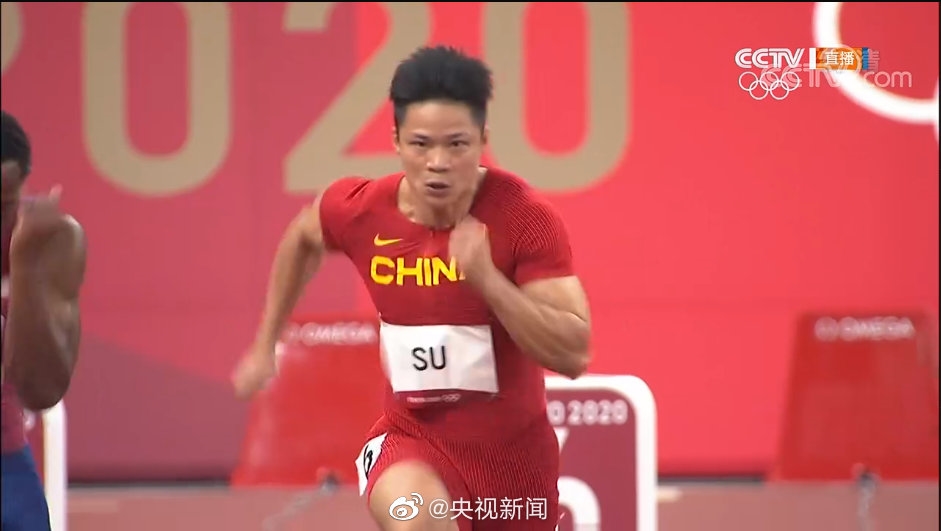 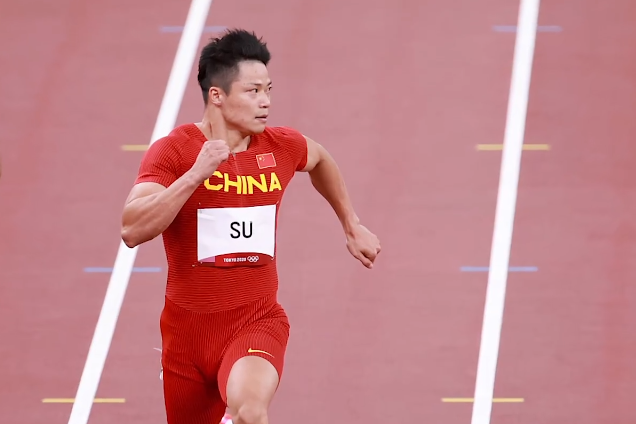 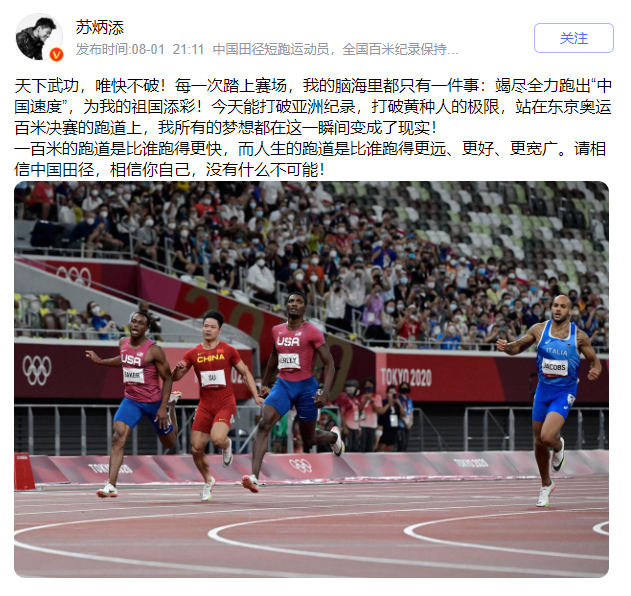 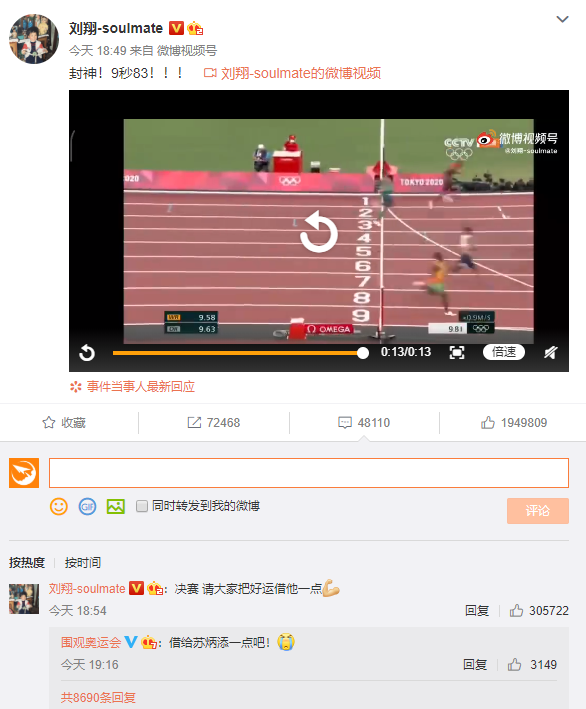 People's Daily Comments: it's not winning a medal that deserves celebration. Surpassing yourself can win respect. From the first 10 seconds to the Olympic finals, Su Bingtian changed his life again and again and won the time. This is the pride of China and the glory of Asia. Running is not only a state, but also a style. Pay tribute to China's speed and every hero who makes history! 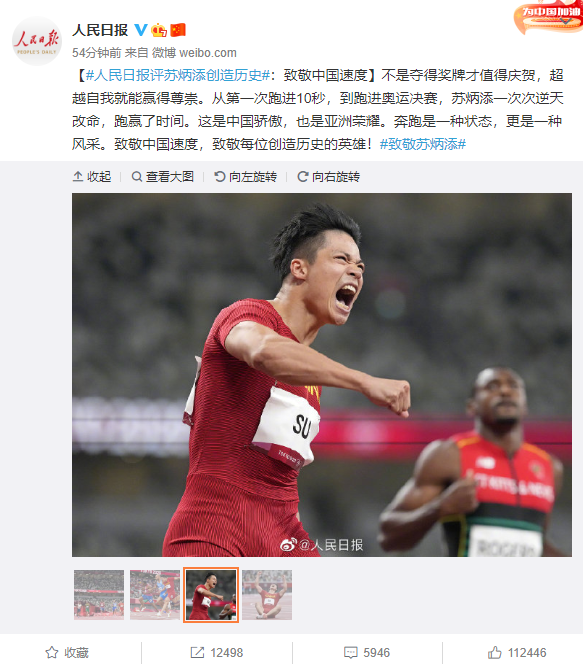 Of course, many Asian netizens are proud of it:

Interestingly, some netizens were shocked by Su Bingtian's position as an associate professor:

It is reported that Su Bingtian is a graduate student majoring in international trade in the 2013 School of economics of Jinan University. He joined the school of physical education of Jinan University in 2018 and became an associate professor in a famous university in Guangdong to teach physical education. Now the first batch of master's students brought by Su Bingtian have graduated. 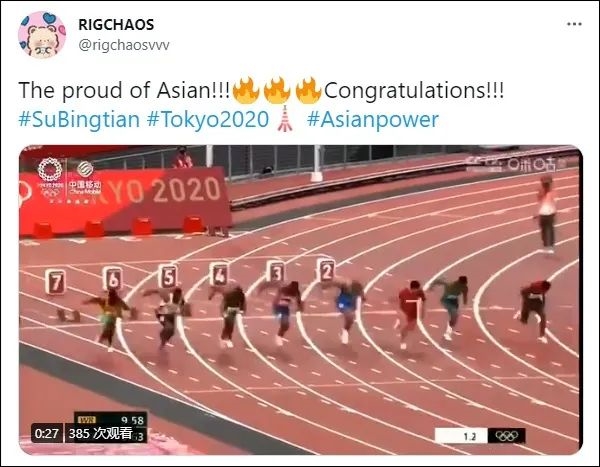 Related news
AMD CEO Lisa Su's higher-end Navi graphics card is already on the road.
Hot Chips Summit Lisa Su Lecture: The new thread tearer is on the road
Android security update in March will fully fix MediaTek Su permission vulnerability
Dr. Lisa Su, President and CEO of AMD, will deliver a keynote address at CES 2021
Gong Lijiao won the gold medal of women's shot put: the first gold in China's Olympic history field events
Su Bingtian entered the 100m finals and became the first person in Chinese History: breaking the Asian record in 9.83 seconds
The first person in China! Su Bingtian broke the Asian record in 9.83 seconds, 0.02 seconds slower than bolt Rio
Su Bingtian men's 100m creates history! Liu Xiang congratulated and shocked foreign netizens
Pay tribute to Su Bingtian, the pioneer of the times, and create a new history of Chinese track and field!
Hot news this week
Lu Jian, president of linkedin China, responded to rumors of the "closure of linkedin China" by saying that the company will increase its investment in China even if it does not reduce it
Samsung Motor announces end to flexible printed circuit board RFPCB business Without affecting iPhone production
I can't play! The official solution to the bug in Chinese Paladin vii was provided
The video asked Net-a-Lago to apologize
On New Year's Eve, a trio on a business trip will celebrate the lunar New Year in space: a first for the Chinese
The United States exposes the higher civilization of the universe: human beings are inferior to good ones
Rolls-Royce China SAO operation caused dissatisfaction wang Sicong message not to buy: official apology
Xiaomi appointed Li Xiao Shuang as a vice president of Xiaomi Motor, CFO Lin Shiwei, and the CEO of Stars
Bytes beat 9 billion yuan to acquire VR companies, then invest the chip, or to accelerate the layout "Yuan Universe"
Xiaomi intelligent clean ecological chain enterprises to pursue technology to complete 3.6 billion yuan C round financing
The most popular news this week
Tesla Q3 earnings reading: Record net profit on revenue Pressure on new Chinese cars is coming
Microsoft CEO NADELLA is most concerned about three things: ubiquitous computing, AI big model and virtual online
Nearly 80% of teenagers in Taiwan think cyber bullying is a serious problem, according to a survey
What opportunities and challenges brought to the financial industry?
Jia Yueting is paying back the money again! Faraday's future former employees in China receive a pay rise
The storage chip faucet is 119 times the first three seasons, the chairman reporter is born, "cattle scattered" did not lose the position.
The liabilities are still 95 billion Jue Ting pays, and FF China's front employee will collect salary and consistent with the in-service.
Wechat iOS version 8.0.16 release: Voice call interface will display the other party's circle of friends only after clicking
Interbrand world has a top 100: Apple, Amazon, Microsoft, Google, Samsung
Facebook is changing its name next week: But Mark Zuckerberg hasn't decided yet