In terms of CPU and GPU performance supported by mobile game hard core, Xiaolong 888 has a very good performance. With its advanced 5nm process technology and 2.84ghz X1 super core, it can continuously output the strong combat power required by the game. Even in the face of long-time group warfare, skill mass sending and other mobile game scenes that need sufficient computing power, Xiaolong 888 can easily control.

In terms of GPU, Xiaolong 888 is upgraded to the independently developed adreno660gpu, which improves the performance by 35% compared with the previous generation of products, and provides unprecedented super hardware support for mobile games. In the face of the most demanding large-scale 3D games, the mobile phone equipped with Xiaolong 888 can also run smoothly under the highest picture quality. 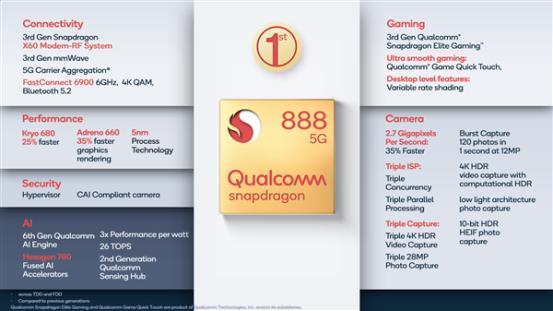 It has always been a fine tradition of Qualcomm to constantly bring forth the old and bring forth the new in the chip field. Even if Xiaolong 888 is good enough to meet an enemy in the Android field this year, there is no limit to the pursuit of extreme games by mobile game parties. So not long ago, Qualcomm launched Xiaolong 888plus mobile platform. On the basis of Xiaolong 888, the performance of CPU and AI has been further improved.

First of all, the dominant frequency of Xiaolong 888plus super core has been increased from 2.84ghz to 3GHz, and the performance has been improved by 5%. The AI computing power has been upgraded to 32tops in one leap, which has also increased by 20% compared with the artificial intelligence performance 26tops of Xiaolong 888. Such a significant performance change is close to a generation's improvement in many competitors in the industry. Of course, it also brings a better experience for mobile game players.

It is worth mentioning that both Xiaolong 888 and Xiaolong 888plus have fully integrated a series of software and hardware features optimized for games, that is, the game artifact elite gaming. Unlike PC games, mobile games are a system level project. In addition to the strong absolute performance of CPU and GPU, they also need to take into account image quality, sound quality, touch operation, network delay, battery life and other parts in the game.

Over the years, Qualcomm has been committed to improving the game experience of Xiaolong mobile platform from multiple levels, among which the most effective is Qualcomm's complete game solution for mobile devices, Xiaolong elite gaming system. Starting from Xiaolong 855, Qualcomm released the first generation Xiaolong elite gaming game engine and began the process of systematic optimization of mobile games. Up to now, Xiaolong 888 / 888plus, a set of super features that make countless game players rejoice, has developed to the third generation.

With the help of powerful software and hardware performance and Xiaolong elite gaming features, Xiaolong 888 / 888plus has become the most suitable mobile phone chip for playing games, opening more imagination space for mobile games and bringing many possibilities in the fantasy game world to players.

Related news
Halo Infinite creative director resigned 343 Industries
Xiaomi 10 youth release the first to adopt Qualcomm Quick Charge 3 latest fast charging technology
Epic Games accused Google of monopolizing the latter, which may have a better chance than apple
New Xbox elite handle submitted by plaintiff in Microsoft rocker drift class action case (photo)
Open the infinite space of mobile games, and Xiaolong elite gaming hard core output is in charge
Zoom in! The secret of winning the game is that the Xiaolong elite game is too powerful
Hot news this week
Announced real-fired people to change the news for four days, the chairman of Tianzhong semen was resigned for personal reasons.
Bank of East Asia (BEA) was fined 16.74 million yuan ($16.74 million) by the Shanghai branch of the People's Bank of China for illegal information collection
After the comprehensive suspension of "nurturance class" network comprehensive and indulgent drama, the audience deserves better
ByteDance invested in Sequencing Technology, which is an AI industrial SaaS software service provider
Former search president of Baidu xiang Hailong joins Transsion The company that sells mobile phones wants to do more Internet
2021 Global Patent List Released: Huawei ranked fourth in the top five in the world in the United States
It's hard to escape the monopoly sanctions American court dismissed Facebook against FTC counterattack
Rewrite history! The largest acquisition in the game industry was finalized: 80.9 billion yuan exceeded Tencent's record
Enterprise WeChat active users reached 180 million The new version is connected with the video number
The Shanghai Astronomical Observatory found a case of a galaxy "escaping" 12.1 billion light-years away
The most popular news this week
WeChat heavy update! This function is finally here.
China successfully launched satellite 13 in 2022
Coldest holiday ever! Tencent announced that minors can play games for up to 14 hours during the holidays
In 2021, public security organs cracked down on more than 6,000 illegal payment and settlement gangs in 134 problematic games
People's Daily: Promoting Express Packaging "Green Revolution"
Ali health online the first domestic helicobacter pylori self-testing product "you tube", 10 minutes out of the results
Xiaomi Youpin Youyu announced the termination of operations
JP GAMES and Alibaba Cloud reached a cooperation to develop a metaversic solution based on the cloud
The camera is lost to the mobile phone Japan Canon close Zhuhai factory: small part parts are still working
Baidu announced connectivity with more than a dozen companies, including Meituan and Xiaohongshu