Over the years, windows has been the most suitable PC system for games. Previously, win7, win8 and even win10 have added many features to promote the further reform of PC games, such as the new DirectX interface, the new WDDM model, etc. in order to give full play to the characteristics of new hardware and new games, the latest Windows system is essential.

Win11 also inherits the glorious tradition of its predecessors. In the new system, Microsoft has added many new features related to games,It can be predicted that win11 will become a new generation of system level game artifact.

So the question is, what new features are added to win11 that are closely related to the game? Is it necessary for gamers to upgrade win11? Let's have a brief chat today.

Win11 can play the power of the new CPU?

If you focus on DIY, you should know that this year will be a year of major changes in desktop CPU. 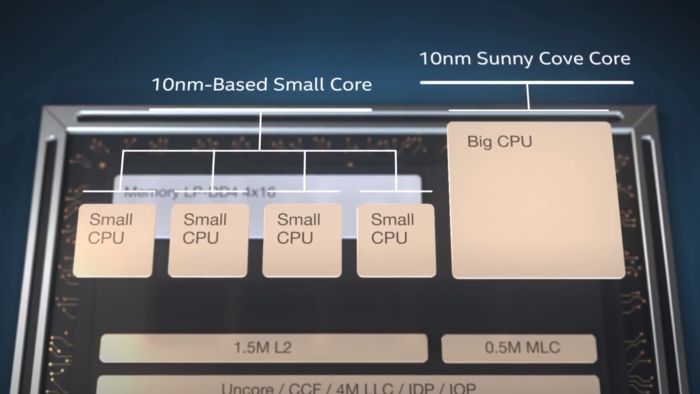 This design seems to take into account both energy efficiency and performance, but in order to really give full play to the characteristics of the chip, the scheduling cooperation of the operating system is also required.

The operating system must be smart enough to accurately determine when to use a small core and when to call a large core.

Unfortunately, since desktop processors are only now designed with large and small cores, they are not optimized in the Current Windows system. If you want to give full play to the power of large and small core architecture such as alder lake, you need to upgrade to windows 11.

In fact, media tests have compared the performance differences between win11 and win10 on large and small core CPU platforms.

The media uses the Samsung Galaxy book s device, which is based on the Lakefield core i5-l16g7 platform, and Lakefield is a typical CPU with large and small cores, which can be regarded as the outpost of alder lake. The following are the specific test results.

The first is the geekbench 5 test. Compared with win10 21h1, win11 has a 5.8% advantage in multithreading and a 2% advantage in single threading.

The performance of win11 is better than win10 21h2, but the improvement is not exciting. We look forward to better performance in the final version. 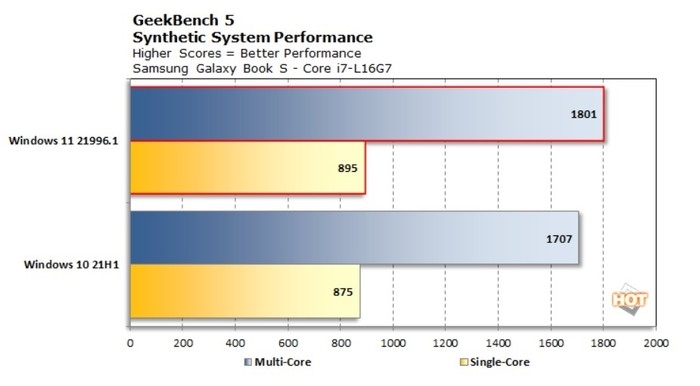 Then the browser scores speedmeter 2. The test also shows that the performance of win11 is better. Using the same chrome 91, win11 has a 10% performance advantage over win10 21h1.

Let's look at the rendering results. In cinebench R23, win11 shows an advantage of about 8.2% in single threaded testing.

This test result is obtained through three different tests, and the core i5-l16g7 processor does show stronger performance in Win 11. 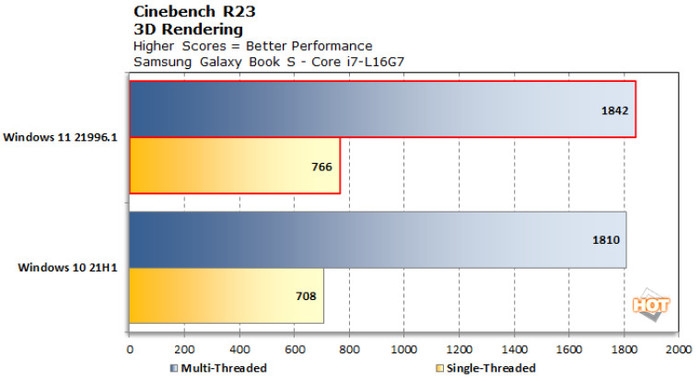 In addition to alder lake, desktop PCs will usher in more large and small heterogeneous CPUs in the future, such as ARM processors designed by big.little.

in any case,Win11 can really give better play to the power of the new CPU,It is reported that Microsoft will further optimize the CPU of large and small core hybrid architecture through windows update in the future. If gamers want to give full play to the extreme performance of hardware, don't miss win11.

Win11 can play the power of the new graphics card?

We know that every generation of windows will update the DirectX interface and update the WDDM graphics card driver model to bring more and more advanced graphics features with the new GPU, and win11 is no exception.

First, win11 will introduce new DirectX features, such as directstorage. Directstorage allows the GPU to directly access the SSD, reducing the graphics data transfer link. While reducing the delay and map reading time, directstorage also increases the storage space of the video memory, providing a more favorable operating environment for developing the world map, which is becoming more and more popular in game design.

At present, the latest generation of NV and AMD graphics cards have supported directstorage features, such as RTX IO in n card and Sam in a card. It is kind that win10 can also support directstorage through system update to obtain a similar experience. 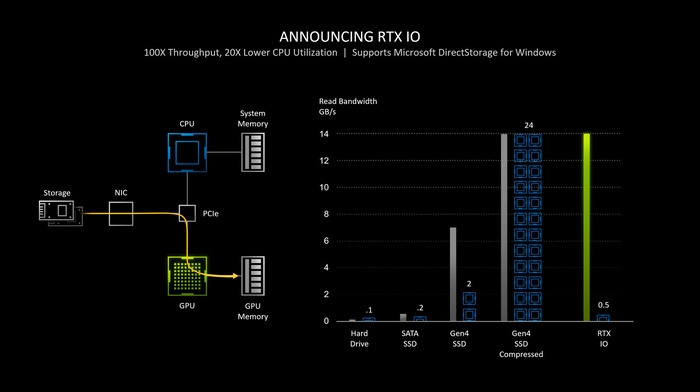 Secondly, win11 will introduce WDDM 3.0 display driver model, which will change the calling mechanism of some GPUs.

For example, it allows the Linux subsystem to directly manage more video memory, significantly improving the graphics performance of the Linux subsystem. Although this has little to do with gamers, the improvement of GPU scheduling by win11 is not limited to this. 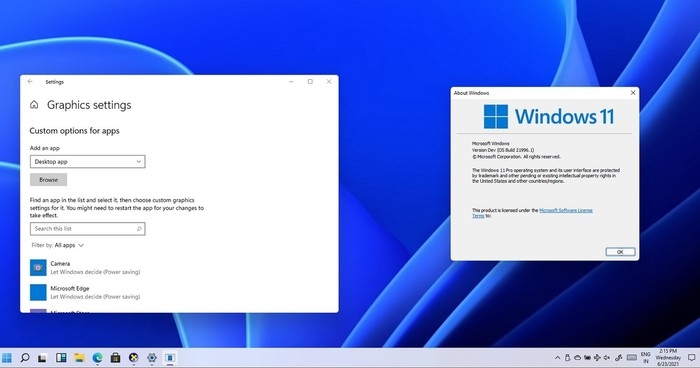 Win11 will also introduce more settings for GPU scheduling. The system allows users to specify an application software to use a specific graphics card, which can obtain better performance. When selected, the relevant application will ask for the scheme of using high-performance GPU, as shown in the figure below. 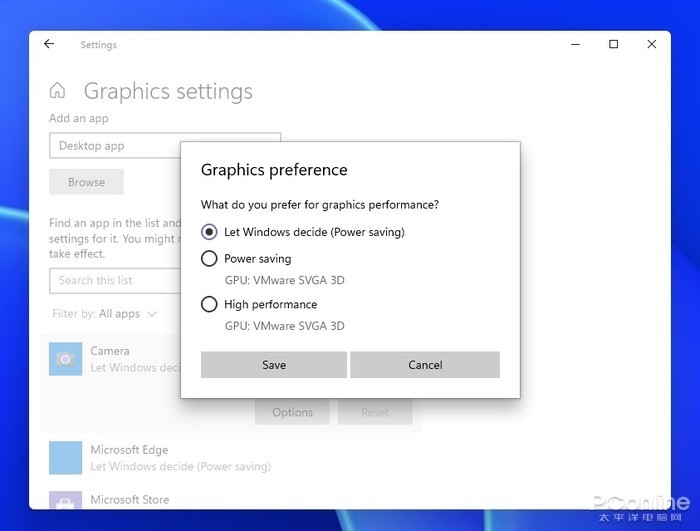 For devices with multiple GPUs, this mechanism allows users to more clearly select a GPU to run the game, which will no longer lead to the tragedy of centralized display playing the game, and give full play to the due performance of the hardware.

Win11 can realize the potential of the display?

Now more and more displays support HDR. Compared with the traditional SDR, HDR can display the picture brightness more accurately and improve the upper limit of brightness. However, you can not enjoy HDR with HDR display. At present, a large number of games are still developed based on SDR and do not support HDR. In this situation, win11 is very necessary.

Win11 introduces automatic HDR, a feature that has appeared in Xbox series X / s. As the name describes, automatic HDR enables DirectX 11 and DirectX 12 games that only support SDR to automatically improve the color and brightness of the game through HDR.

As long as players have the right display, old games will also get obvious visual improvement through HDR.

If you already have an HDR monitor and the game you're playing doesn't support HDR, win11 is worth a try.

In recent years, Microsoft has been integrating home game consoles and PC game resources, launching Xbox related applications in win10, and putting a large number of XGP games shared with Xbox platform on the Microsoft Store.

In Win 11, this common idea of game resources has been further strengthened. Win 11 directly integrates Xbox applications, provides a more intuitive way of game management, and also provides a community platform for excellent games, communication and consultation with other players. 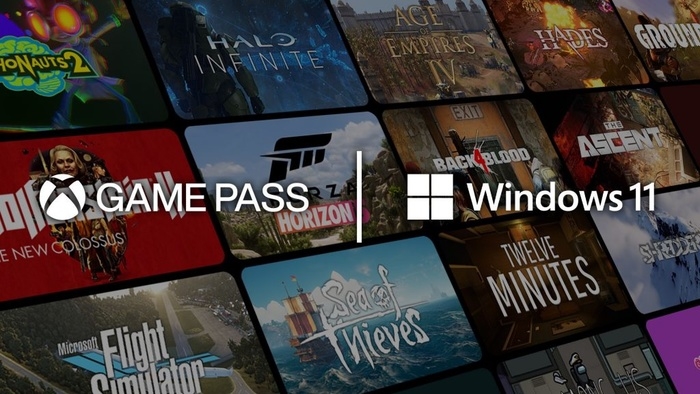 It is reported that this cross platform synchronous selling strategy will also be applicable to more studios and partner manufacturers in the future, allowing players to freely choose a host or PC and maintain a consistent experience.

Simply put, with win11, you can more easily obtain game resources on the Xbox platform.

Although win10 can now get a similar experience by installing Xbox applications, win11 with pre installed related functions is undoubtedly more concerned in this regard.

However, in the short term, no one can shake the position of windows in the game field. If you play games with PC, windows is still the first choice.

Every generation of windows has made a lot of efforts in games, which makes windows the most suitable desktop system for games for many years.

In Win 11, we can also see Microsoft's adaptation and compatibility with new hardware and the application and promotion of advanced graphics technology. In the win11 era, what kind of game masterpiece will be born on PC and what new experience will it bring? Let's look forward to it together. 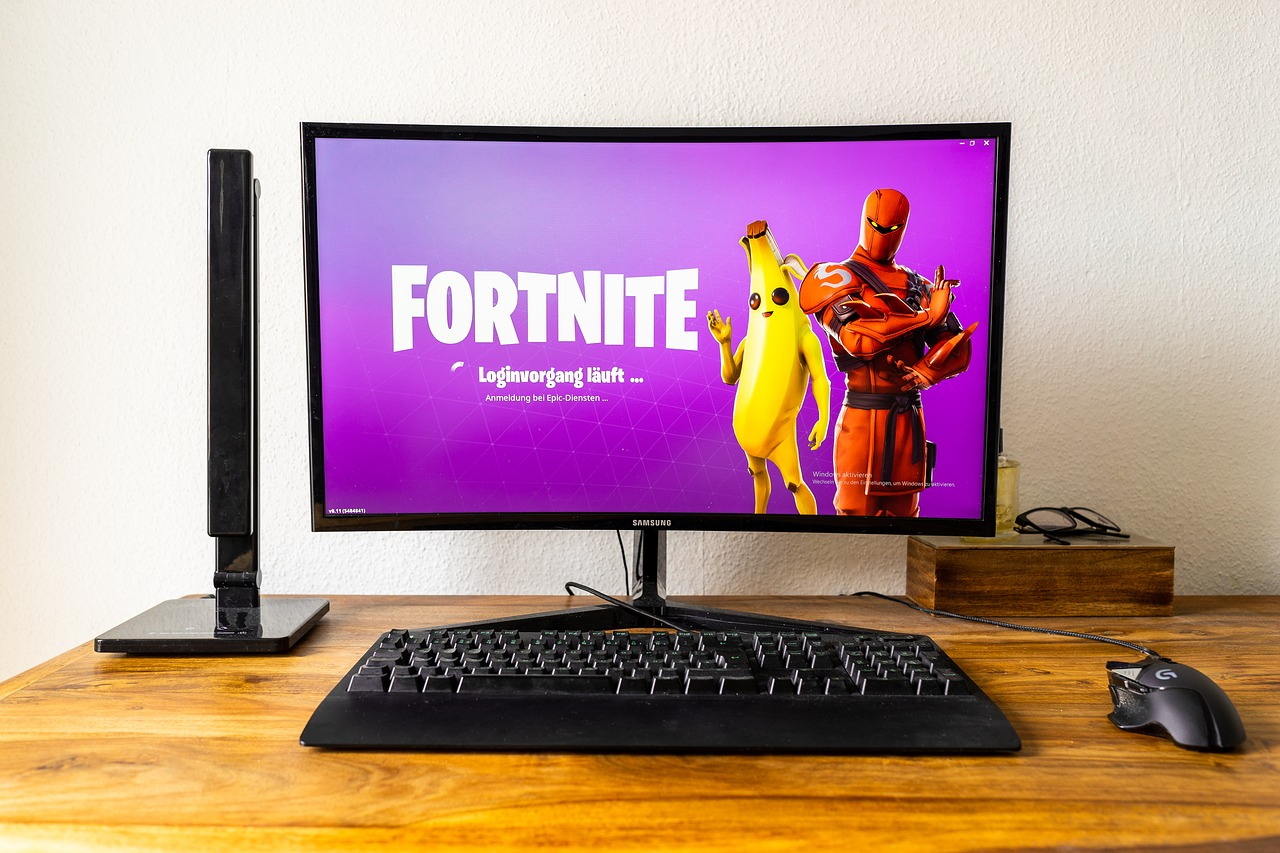 Related news
Airpods X generation? 399 dollars!
Huawei Xu Zhijun: new IP is a pure technical subject
Why does Huawei's "new IP" encounter new problems?
NVIDIA and Intel release win11 driver! Win11 game features exposed
New generation game artifact talk about win11 game features
Win11 new features at a glance! Taken on a new look
Microsoft explains why Win11's TPM 2.0 and VBS are necessary
What is Win11? Microsoft's update on win10: Many new functional hardware requirements remain unchanged
Are you enough? Microsoft announced that all compatible users can upgrade win11 2022
Game players pay attention to Win11 to close these two features: increased the frame number 5 frames
Hot news this week
Sources say Penguin Random House's deal to buy Simon & Schuster has fallen through
Any chance of taking over the agency? Sources say Tencent has been in contact with Blizzard for at least a year
Blizzard's founder responded to NetEase's contract renewal: Cooperation is a two-way street, and we will do our best to make Blizzard games accessible to Chinese players
Ali suddenly released a new chip, the domestic chip breakthrough, abandoned the American chip fantasy
Better than Huawei or Apple? It is revealed that Samsung S23 uses satellite communication: can also space voice
Players recognized as the best of the year! The Old Man Ring won four awards at the 2022 Pension Rocker Awards
According to sources, TSMC replaced Samsung to win a large order of Tesla's assist driving FSD chip, based on the 4/5nm process
Today is the 18th anniversary of Blizzard's World of Warcraft: unfortunately, the national service will be discontinued in January
Jinshanyun reported revenue of 1.97 billion yuan in the third quarter, down 18.4 percent year on year
Xiaomi Q3 has not returned to the normal growth track. Wang Xiang: The idea of high-end strategic quick wins is incorrect
The most popular news this week
China AVS3 video, audio standards rise! 8K/4K/ mobile for the first time
AMD ripper is finally not lonely! Intel Fever U returns to 56 core hard carry 64 core
The price of Xiaomi 13 to 4,500 yuan has sparked heated debate among netizens: Should you buy Xiaomi at more than 4,000 yuan
Thunder online game accelerator announced that it will be officially suspended on December 1
With the NIL technology, Canon wants to provide China with a lithography machine comparable to the EUV
Wechat iOS version 8.0.31 private test update: Added the function of dragging pictures and videos to send with one key
AMD Zen4 12 core price record low! The cumulative price drop is 20%
Priceless metal is thrown away: One million scrap mobile phones can recycle 68 kilograms of gold
The world's first 6GHz! Intel's "Ashes Edition" arrives early: You're out of the sky
SONY loosen up! PlayStation's multi-year super exclusive is coming to PC