Sanxingdui unearthed a bronze sacred tree again: it took 4 months to extract it!

In March this year, the archaeology of Sanxingdui site in Guanghan, Sichuan Province ushered in phased new progress. Officials announced many unknown cultural relics with strange shapes, including the mysterious and magnificent bronze sacred tree.

According to the latest CCTV news report, a bronze sacred tree was found again in Sanxingdui Pit 3 recently. It is reported that in March this year, a corner of the bronze sacred tree was exposed in Pit 3, and then the sun wheel ornaments, branches, flower buds and other components were found one after another.

Because its trunk was pasted with other cultural relics such as ivory, archaeologists took four months to extract it.

It is reported that some damaged bronze sacred trees were also unearthed in Sanxingdui Pit 2 in 1986. Due to the serious damage, experts took many years to repair them, but they are still incomplete, especially some components have not been found, and people's understanding of Sanxingdui has also come to a standstill.

Experts said that after observation,The sacred tree of Pit 3 unearthed this time is very similar to that of Pit 2 in both shape and volume. It does not even rule out that they originally belong to the same sacred tree. If they can be spliced together, it can explain many academic problems and is a very important discovery.

It is understood that in April this year, the official announced the preliminary repair effect of Sanxingdui No. 3 divine tree. On the whole, the divine tree is divided into three layers: the first layer is a single branch, the second layer is a double branch, and the body portrait of human head and bird stands on the top of the trunk of the third layer. The base is composed of three main trunks. Each casting is twined in pairs, with a twist shape and wrapped with gold foil. 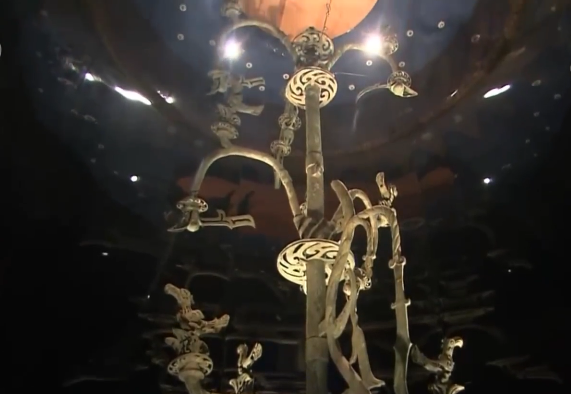 Related news
Is Sanxingdui an alien civilization? People's daily refutes rumors: authentic "made in China"
Utensils like hot pot unearthed from Sanxingdui: experience of Sichuan hot pot thousands of years ago
More than 120 ivory unearthed from the sacrificial pit of Sanxingdui
What is the story behind the mysterious gold mask of Sanxingdui? Experts' detailed interpretation
New discovery of Sanxingdui! Nearly 60 pieces of golden leaves
Sanxingdui unearthed a bronze sacred tree again: it took 4 months to extract it!
Sanxingdui newly unearthed complete gold mask expert 3D restoration: the effect is too amazing
After checking the treasures of Sanxingdui, a gold artifact was found, which looks like a pot shovel: its shape is unique
There are new surprises! Sanxingdui found nearly 1 meter high bronze altar over 12,000 pieces
Tesla China First Shatters Delivery Record in Six Months amid Covid's Fading
Hot news this week
Kuaishou launched a self-developed cloud intelligent video processing chip: The chip has been streamed successfully
Ministry of Public Security: Single telecommunications network fraud continues to cause 40 % of all electrical fraud cases
Special price "kill ripe"? Bike-sharing platforms have different prices for the same package for different users
A tech company in Shanghai has been fined 220,000 yuan for swiping orders to improve its ranking on Yelp
Text message color, picture quality compression! Google calls out Apple for improving cross-device messaging
Alibaba: Shareholders SoftBank will settle in advance for advanced payment in advance involving a maximum of about 242 million ADR
It is also the collapse of the mine card: NVIDIA graphics card plummeted, AMD graphics card increases against the trend
Gaming phones also have optical shake protection: a 50-megapixel large-background master camera on the Rescuer Y70
Musk's eyes! Lei Jun released a full -size humanoid robot Xiaomi self -developed strength explosion table
Biden signed a chip and scientific bill, a video call of WeChat iOS internal test suspension window, the advanced CPU caused Win11 to be difficult to use, Huawei new machines enter...
The most popular news this week
Economic Daily: US Chip Act will not stop China Chip!
Because of violating consumer law, Google was fined about 288 million yuan
Global e-commerce revenues may shrink for the first time
Apple's M2 processor is coming down: The iPad Pro 2022 is scheduled to ship in October
Are the suitcases hot? Meteorologist alert, the climate crisis is here!
Has been taken 4 pins, the new crown vaccine, the American Pfizer CEO is positive: taking special effects medicine
A fire broke out in Nintendo Japan headquarters, and the news said that it was caused by the charging electronic device
YouTube has been revealed as early as this fall to launch an online store to support streaming platform subscriptions
Video game company Unity rejected AppLovin's $17.5 billion takeover offer
Huawei Mate 50 series first emergency mode: can make phone calls and scan when the battery is exhausted