The biggest upgrade so far! The launch of the new ipad Mini Bank of China: full screen and 5g support for the first time

Apple's 2021 autumn new product launch officially ended,But the biggest upgrade product this time is not the little bangs iPhone 13, but the sixth generation ipad Mini, which is also the largest upgrade in the history of the product line.

The most obvious improvement of the sixth generation ipad Mini is its appearance. It introduces the design language of iPad air 4 as a whole and adopts a comprehensive screen scheme for the first time,The front is equipped with an 8.3-inch liquid retina display with a resolution of 2266x1488326 PPI,It also supports original color display and apple pencil second generation.

With a comprehensive screen with an ultra narrow border,The physical home key on the front is also cancelled for the first time and changed to the two in one side fingerprint of touch ID power key.

Another major highlight of this upgrade is the support of stereo speakers (horizontal), which can bring a better audio-visual experience.

In terms of endurance, the sixth generation ipad Mini has a built-in 19.3 watt hour lithium polymer rechargeable battery. It uses WLAN to browse web pages or watch videos for up to 10 hours, and the charging interface is usb-c.

The sixth generation ipad Mini this time offers four color options of dark space gray, pink, purple and starlight, and the storage capacity is available in 64GB and 256gb. The price of WLAN version is 3799 yuan and that of cellular version is 4999 yuan. It will be ordered at 9 a.m. on September 16 and sold on September 24. 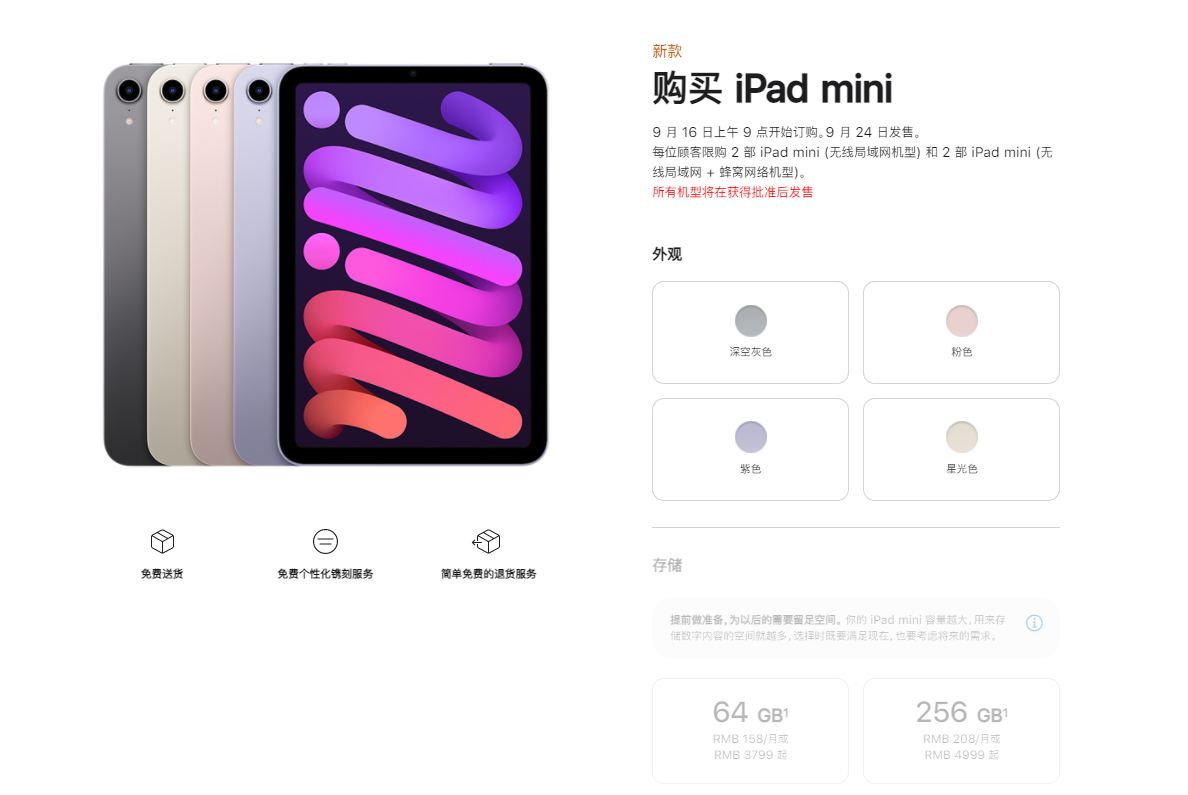 Related news
Brushing and shaking hands on the 43-inch vertical TV experience? Samsung launches The Sero TV (picture)
The linely group's best mobile processor of the year: God u Kirin 810 wins the title
"Generation God U" Kirin 810 gets The Linely Group's annual "Best Cell Phone Processor Chip"
Hot news this week
Performance exploration of Apple A15 processor: CPU standing still compared with A14 and GPU increased by 38%
Tencent announced that WeChat open external chain declaration followed the four principles started to execute on September 17
Tesla was stolen by a teenager in the basement of the community and hit several cars! Exposure of monitoring picture in the vehicle
IPhone 13 dominates the hot search list experts: there are no hammers like apple that cause widespread discussion for free
IPhone XR, 12 pro, Max and other models off Apple's official website: the maximum price reduction of the old model is 1500 yuan!
Amd released radeon software adrialin version 21.9.1, bringing more new features and extended support
Huawei matebook's new product is equipped with windows upgraded version of Huawei application market and supports running mobile applications
Jingdong health "National Health season" is about to open. The Mid Autumn Festival gift is as low as 50% off and 20% off every 200
The starting price of iphone13 is 5999 yuan. Understand Apple's new product launch: 5 products appear
Jingdong opened its first super body store in Indonesia, making "China service" as loud as "made in China"
The most popular news this week
The first round of iPhone 13 opened apple market value evaporated by 300 billion yuan overnight
Rush hot search! Baoli iPhone13 is available, Fujikang urgently recruits 200,000 people, the bonus is up to 12,700 yuan per person!
Apple CEO Tim Cook avoids metaverse: I stay away from buzzwords and prefer to call it augmented reality
Amazon investigates Indian employee bribery scandal: zero tolerance for corruption
Tesla autopilot is! Regulators: Address basic safety issues first
Unprecedented space movie come true! Russia has done another big thing
Oscar starring! Apple invests in sci-fi blockbuster preview: Must brush the rhythm
More than 30 million vehicles in the United States have been found to have "dead airbags.
A Tesla Model 3 crashed into a tree and caught fire, killing two passengers. Official investigation
Which companies will be affected by the increase in the entry threshold for insurance company branches?