An American man who taught at an English language training facility in China has been sentenced to 41 years and eight months in federal prison for coerce ing Chinese female students as young as 12 to send them pornographic images and videos.

Curtis Baldwin, 48, a former English first teacher, left China in November 2019, the US Attorney's office for the State of Missouri said in a press release announcing the sentence on Sept 17.

After returning to Springfield, Missouri, he contacted the victim, a 12-year-old girl, via wechat. 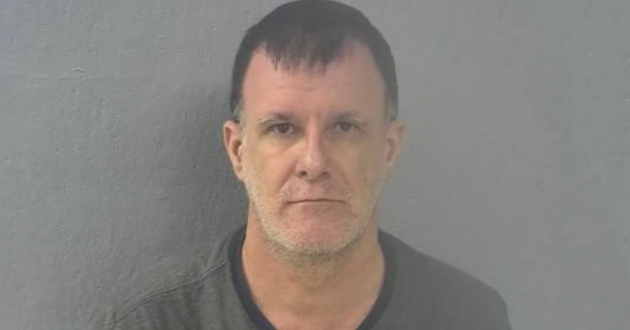 Baldwin told the victim he had graphic video clips of the teen "engaging in sexually explicit acts" and threatened to post them online unless she sent him more sexually explicit images and videos, the release said.

The girl's father saw the message and contacted EF English first, which then contacted the FEDERAL Bureau of Investigation.

Federal agents sought a search warrant for Baldwin's home in March 2020, during which they found videos Baldwin had made of former Chinese students engaging in sexually explicit acts on Baldwin's computer.

The files also contained a pornographic video called "My First Project," made by Baldwin for a local underage springfield female.

On October 5, 2020, Baldwin pleaded guilty in federal court to one count of sexually threatening a minor and one count of receiving and distributing child pornography.

Curtis Baldwin is a former EF employee, according to a statement on EF's official weibo account (@EF) on the early morning of October 23, 2020. The company terminated Baldwin's employment contract with EF in November 2019 for violating the company's code of employee conduct, and Baldwin returned to the United States.

The statement also mentioned that in December 2019, ef was contacted by a parent of a former student who said Baldwin had contacted the student through social media in the US and that the communication may have been illegal.

With the parents' consent, EF North America staff reported the case to us authorities within a week. 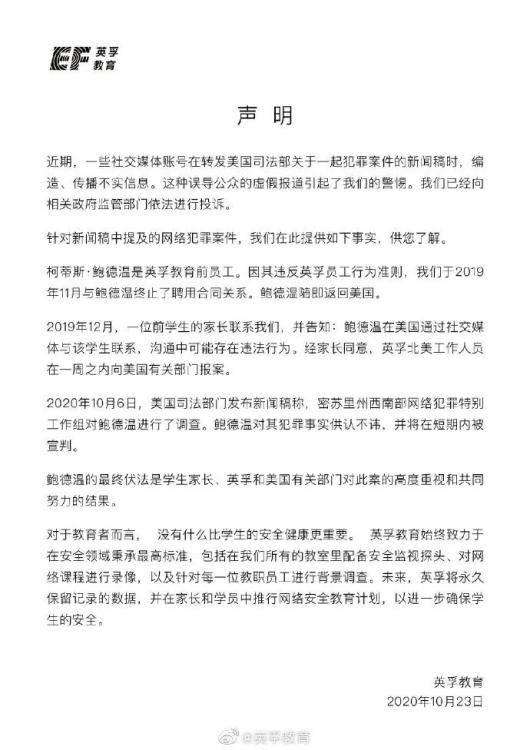 For example, in July 2019, ef Education First Xuzhou Center had "several foreign teachers were arrested for drug abuse". In 2013, an American teacher at an international school in Shanghai was arrested on suspicion of sexually abusing at least seven children. In 2013, the media broke the news that an American foreign teacher in Nanjing had a record of sexual assault on children, but he had been teaching in China for five years, successively working as a foreign teacher in an English training institution and a university in Nanjing......

In 2017, the State Administration of Foreign Experts Affairs and other departments jointly issued the Notice on the Comprehensive implementation of the Work Permit System for Foreigners in China.

According to the notice, foreign language teachers are classified as "B" foreign professionals and must obtain work permits to work in China.

In 2018, the Ministry of Education and other three departments jointly issued a notice on Improving Some Working Mechanisms for Special Governance and Rectification of Off-campus Training Institutions, which stipulates that "online training institutions must publicize teachers' names, photos, shifts and certificate numbers in a prominent position on their websites." However, at present, most training institutions have not made clear and open marks on their foreign teacher qualifications.

According to the document, foreign teachers should abide by Chinese laws and regulations, and abide by China's public order, good customs and professional ethics. Foreign teachers shall possess the educational qualifications and teaching skills necessary for engaging in educational work; Foreign teachers shall be physically and mentally healthy and have good conduct, with no criminal record, no history of infectious diseases and mental disorders, no acts of sexual harassment, injecting drug use, long-term dependence on psychotropic drugs and other diseases and behaviors that may affect the safety and physical and mental health of students.

Related news
China core international: China core from A-share reactor
Chinese core from A-share reactor
@!!FROM 18-70YEARS/Call king@+27715451704 HOW TO JOIN ILLUMI
The English name of Chinese liquor has been changed: Chinese Baijiu has been officially launched
41 years in prison! A former English First foreign teacher who threatened a 12-year-old Chinese schoolgirl was sentenced.
Hot news this week
"Used car salesgirl" appeared on the webcast platform: netizens were angry because of their exposed clothes
Ping An Bank's net profit rose 32.5% in the third quarter, Xie Zhiyu crazy reduction, Zhang Kun is a big buy
Xiaomi intelligent clean ecological chain enterprises to pursue technology to complete 3.6 billion yuan C round financing
Microsoft CEO NADELLA is most concerned about three things: ubiquitous computing, AI big model and virtual online
Alibaba Cloud released a new operating system "Dragon Lizu" secret research and development 10 years anger 20 billion
Jia Yueting is paying back the money again! Faraday's future former employees in China receive a pay rise
Internet users ridicule this year's "Double 11" : Taobao "collapse", promotional text messages bombarded, still do not understand the rules
Huawei SEMICONDUCTOR Manufacturing International received export licenses worth hundreds of billions of dollars from the United States
Documents show that Huawei SMIC received export licenses worth hundreds of billions of dollars even after being blocked by the United States
The storage chip faucet is 119 times the first three seasons, the chairman reporter is born, "cattle scattered" did not lose the position.
The most popular news this week
Ali Tencent and other Internet employees by pit miserably! The principal landlord plans to run away with the money in 3 years
Do you agree? Expert: Long vacations should be suspended during epidemics
The biggest electric car order ever! Hertz rental car on-line Tesla Model3: Expensive
Samsung Tab S8 Ultra exposure: Tablet also has Liu Haiping
AMD will launch its new HPC on November 8, a day before Nvidia
Netizens get a 145 yuan Apple new polished cloth Photo: Compatible with all Apple product boxes
Apple "Apple Watch Pro" brand name LOGO exposure
NASA experiment: Astronauts grow organs on the International Space Station for the benefit of humanity
Ten times faster than a supercomputer! Important progress has been made in the study of quantum computing in China
Tesla, with a market capitalisation of trillions of dollars, will catch up with Amazon, and Musk's fortunes are up four hours a day