What is the opponent of iPad and Amazon Alexa? Facebook releases third generation screen version of smart speakers 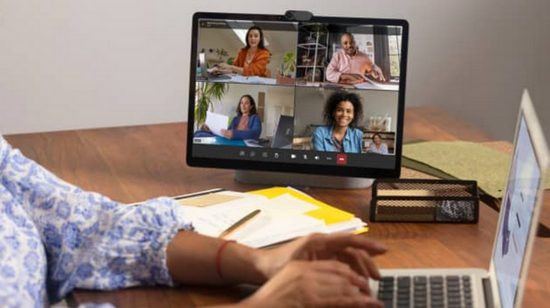 Sina Technology News Beijing time early news, according to reports, the US social network giant Facebook released the third generation screen version of the smart speaker Portal on Tuesday, and Facebook also launched a new service and allows companies to launch a new service. Buy and deploy a large smart speaker for employees.

This product upgrade shows that Facebook is still very optimistic about household smart speakers with video call functions, I hope people will continue to work socialize through video chat.

The company launched the Portal smart speaker for the first time in 2018, but no sales data of the product is not disclosed.

Affected by the variants of new crown virus Delta, US companies have postponed the time of returning to the office, and work colleagues and lovers still need to keep in touch through video chat, and Facebook is preparing to seize this opportunity to continue to improve the product. On the screen version of the smart speaker, Facebook's Portal and Amazon's Echo Show and Google's Net Hub are positively competitive.

On the same day, Facebook launched a new product called "Portal Go", priced $ 199, configured 10 "screen, you can unplug the charging module portable in home. This smart speaker is configured with a handle, and if the user performs a video call through the Messenger software under Facebook, the battery capacity can support a continuous four-hour call time. If it is closed, the battery life is 14 hours.

The company also released another hardware "Portal +" on the same day, configured a 14-inch screen (can be tilted forward or later), priced at $ 349. This product is mainly positioned in the user's computers, which can be placed on the desk to make a video call. The company introduces that this product has a better sound quality than the past versions.

From Tuesday, consumers can book third generation Portal speakers, and the product will be shipped to the subscriber on October 19.

On the same day, Facebook also launched a new service "Enterprise Portal" for business users, SMEs can purchase a large smart speaker for employees, and then proceed for remote deployment and management. The above executive Colinz said that as US companies gradually turn to home work or mixed to work mode, Facebook saw the market demand for this service. This service will first launch in the US market in the form of beta, will be pushed to more countries next year.

Collins said in an interview with the media that today, the US home work is frequently used to video call function, so Portal is a very useful product. Moreover, the trend of home work will not disappear.

In order to meet the needs of the remote working family, Facebook also said on Tuesday that will "Teams" "Teams" in the portal smart speaker in the Portal smart speaker in December this year. In this way, speaker users can directly access the calendar, address books, contacts in the Teams software, and use file sharing and chat feature.

In the past, Portal speakers have supported many other video chat software, such as Zoom, Bluejeans, and WebEx.

Related news
Amazon released a bunch of new Echo products around Alexa
Facebook announces portal Go to punch iPad, kick Amazon Alexa?
What is the opponent of iPad and Amazon Alexa? Facebook releases third generation screen version of smart speakers
Hot news this week
Titanium Media Publish Assesum: People's Bank: Digital RMB Winter Olympics pilot has entered the sprint phase; Tesla announced that 250,000 Powerwall energy storage power stations have been installed
Close to the apple millet, two weeks of consecutive weeks, China Smartphone second: 3 years, the world's first
Alibaba and Tencent have received more than half of the 43 antitrust fines, and lawyers say the penalties are likely to increase
Study on the sequelae of COVID-19 in the Chinese team: Shortness of breath, depression and other problems still existed nearly one year after discharge
Capital does not love SAIC, "flying" subsidiary, Jet Hydrogen Technology intends to go to science and technology board
Huawei redefines one of the three major communication networks of the underground communication network
Tencent responded to "APP to get ridiculous": Upgrade APP is now downloaded for user rights protection
Gree announced the implementation of the double-holiday work system Dong Mingzhu from the media voice netizen God reply
The approval of Sensetime's IPO gives the metasurverse concept another ride
Netease Cloud Music will soon be listed on the back of 200 million monthly live users how to make money
The most popular news this week
Huawei Heavy Machinery is re-incorporated! Generators except logo exactly
Samsung PCIe 4.0 hard drive upgrade: more heat sinks fully support PS5
New crown latest variament has emerged in early November: New York, USA has a bad feeling
Black Friday us stores face embarrassing situation! Got stuck in the neck
Vehicle positioning signal weak puzzle! To be completely solved by Huawei
Apple resumed sales of the iPhone and iPad in the country after an emergency removal, with prices rising by 25%
In the first 10 months of the year, China's software business revenue increased 19.2%
Guangming Daily: Bid farewell to disorderly competition, platform economic development to tighten the bottom line
Can WeChat transfer borrowed money?
Sources say Huawei has begun mass production of a generation of foldable phone price surprise