Once in a while, Tesla is about to launch a lawsuit against the owners of rights protection and attract a lot of attention from netizens. It seems that Tesla has found such a traffic password to maximize its brand publicity in China at the lowest cost.

The feud between Tesla and Hancho has also flared up.The reason is that Han Chao was subjected to the reverse tactics of Tesla. Although Tesla's sales fraud was established and it was judged to be "three-for-one withdrawal", Han Chao may have to sell his house to compensate for the "reputation" loss of Tesla.

What happened was that Tesla was found to have sold a car with a fatal accident, and han Chao, a human rights owner, directly sued Tesla.Tesla was ordered to pay three for one, including a 379,700 yuan refund and 1.1391 million yuan in compensation.

In addition, this evening, under the hashtag # Tesla sues owners for $5 million,Tesla's legal department made a quiet appearance and posted a picture in the comments section to respond to the incident, expressing five disputes between Tesla and Hanchao.

The first case: Tesla has paid 1,518,800 yuan to Hanchao according to the judgment of the second instance in the dispute between Tesla and its wrecked second-hand car. But in this case, it will apply for a retrial in accordance with the law.

In particular, during the use of the second mobility vehicle, tesla claims for compensation in accordance with the contract, due to the serious damage caused by the accident caused by the relative driving without a license. In order to ensure that the loss can be compensated, according to the law to apply for property preservation of Han Chao.

Fourth, Han Chao sued Tesla for infringement of reputation rights in April this year, and the case is now under trial.

Fifth: Tesla sued Han Chao in August this year, infringement of the right of reputation dispute case, is also in the trial.

To be sure, Tesla has always responded in its best interest. But that's just one side of the story.Han Chao, the owner of the car, responded more directly, with a fatal knife and a recorded hammer. Which one is more credible? 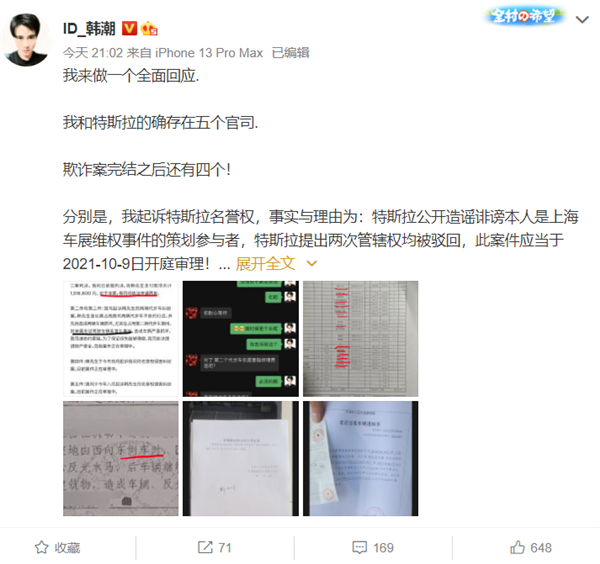 In the evening, The owner of Tesla's legal department han Chao also voiced his voice on his personal network platform and made a comprehensive response. The following is the full text of the response:

I do have five lawsuits against Tesla.

Four more after the fraud!

I sued Tesla for its right of reputation. The facts and reasons are as follows: Tesla publicly slander me as a planner of the Event of protecting the rights of Shanghai Auto Show. Tesla's jurisdiction was rejected twice, and this case should be heard on 2021-10-9!

The third and fourth should be classified as one case, because they were all about scooters,However, in order to maximize my cost of rights protection, Tesla divided the case into two lawsuits, which means THAT I have to pay twice the lawyer's cost and time for rights protection, and the court session time and frequency also double!

The recording of whether the two scooters are "illegally occupied" by the Market Supervision Administration has always been reflected in my microblog. The content of the recording is that Tesla should provide scooters in accordance with the law, because the vehicles involved in the fraud have hidden safety risks.And a substantial brake pedal can not move, the vehicle suddenly paralyzed problem!(Recording content)

I also sent a recording in which I asked the tesla service staff, "The Market Supervision Administration requires you to provide mobility scooters, but you refused to do so. Is that bigger than Tesla or the law?" The service staff refused to answer, slamming the door and leaving! (Recording content)

In response to the alleged relatives and scooter damage:

In a response, Tesla's legal department said only that "the family... ." Did not have "I give relatives" and other words, because what, because the traffic police brigade has the whole record, I do not know about this, although it seems that the difference is not big, but even if an accident, a belongs to the independent behavior! In case hearing I also can request the court to traffic police brigade transfer record and relevant archives confirm lawfully!

Secondly, on the day of the scooter accident, I immediately contacted the after-sales service of Tesla to report the accident and got in touch with them. I posted on the blog that I was willing to bear the related maintenance costs and the degradation of the vehicle! (Fact Sheet 1) (Fact Sheet 2)

I did the same thing in the traffic brigade,Tesla also acknowledged it, and its legal department confirmed with me again that I was still willing to bear the consequences.

In the end,Tesla did not allow me to witness the damage assessment process, but directly assessed the cost of vehicle repair and compensation, totaling about 200,000 yuan. It should be noted that the total market value of this scooter is just over 200,000 yuan!

In the confirmation of traffic liability, it is clear that the accident was caused by reversing, and the front part did not experience any collision, but a large number of front parts of the body were replaced in Tesla's damage receipt!

Therefore, I now only accept the accident photos taken by the traffic team!

It is also a dispute over reputation rights. Tesla and I have different causes of action and appeals.

Me: Tesla rumor, slander, I don't want a penny!

Tesla: I cheated you. You can't say THAT I'm not good and you need 5.05 million yuan, but I really can't find a reason to praise you!

Don't say the brakes aren't working. Listen to the market Regulator. I was the first to experience it!

Finally, as for the car in accident, the traffic police brigade could only deliver the car to me. I wanted to find a third party to make a reasonable loss assessment for compensation, but out of basic trust, I still handed it over to Tesla, and they took me to their own sheet injection center to make a god level loss assessment! 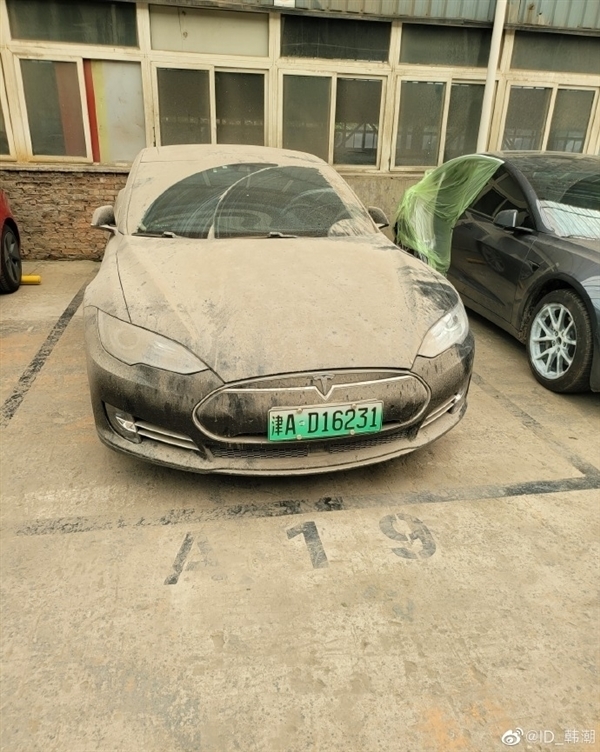 Related news
NVIDIA Tesla v100s low-key release: full speed up to turn into Tu Haojin
NVIDIA gives up Tesla brand in a low-key way: because of its name collision with famous electric vehicles
Declare war on rights owners! Han Chao hard gang: 5 cases of hammer recording see the true face of Tesla
Female car owners are also being sued by Tesla for compensation of 5 million yuan
Hot news this week
Lu Jian, president of linkedin China, responded to rumors of the "closure of linkedin China" by saying that the company will increase its investment in China even if it does not reduce it
Huawen: Increase IPv6 + Technology Innovation Helps my country's continued leading the next generation of Internet innovation
Lenovo refutes rumors "Liu Chuanzhi 100 million annual salary" on the entrepreneur's "stigma" when to rest?
Net-a-world Liu Chuanzhi annual pension of 100 million yuan, Lenovo Holdings dispelled rumors: serious misrepresusion
The video asked Net-a-Lago to apologize
The world's richest man, worth $1.3 trillion, has launched a homegrown game: He can't wait to play it
The United States has first released electronic cigarettes, and the fog core technology rose 15%, and what impact will 400 billion markets will meet?
Infringement of Samsung Trademark Dedicated to Shenzhen Post Office Customs seized over 100 mobile screen
Meituan engineers responded to "frequent positioning" : suggest caution in downloading some overseas privacy software
I can't play! The official solution to the bug in Chinese Paladin vii was provided
The most popular news this week
WeChat collapses! The picture has not been sent to respond: in emergency repair
WeChat's response collapsed: the sending of pictures and files failed and has been gradually restored
Tea Yan Yue color business scope of new wine sales Tencent Millet indirectly hold tea Yan Yue color
JD.co.u. auto parts app online, plus code after the car market
One million Tencent shares were traded in block trading at HK $493.825 each
September 2021 Top 10 of the world's most popular mobile gaming revenue: Original God topped the list
Apple's self-developed Mac chip is the ultimate hit: or the M1 Pro and M1 Max, major upgrades to the GPU core
Astronauts began to space code "dismantling courier": this move is too much love
The Russian court recovered approximately 2.36 million yuan to Facebook
Can you bear it? Today's Apple Wang fried new shape exposure: netizens live