Rumors of the upcoming Samsung Galaxy S22 Ultra replacing the Note series have been circulating for the past few weeks, according to MS Spoweruser. Now source @Chunvn8888 claims that the Galaxy S22 Ultra may officially be called the Galaxy Note 22 Ultra due to Samsung's new naming scheme. 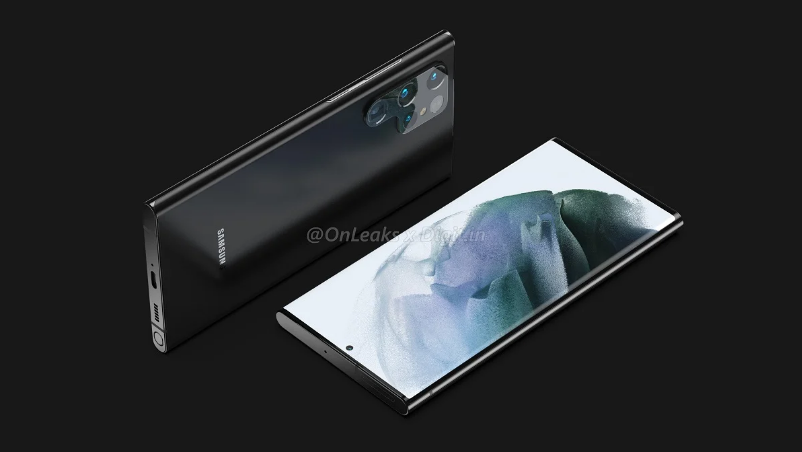 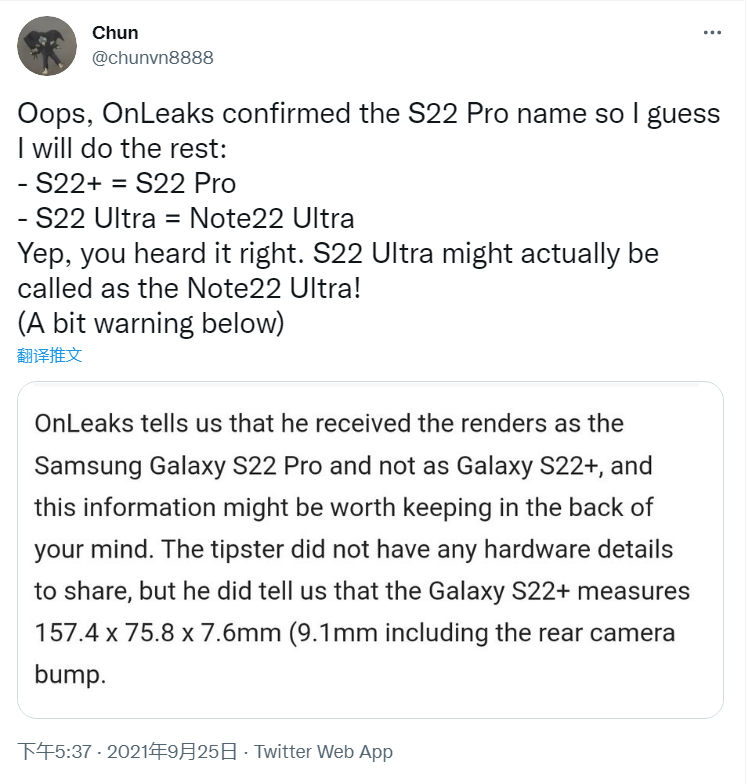 Previous leaks have revealed that the Samsung S22 Ultra will support the S Pen and will also have a dedicated Pen slot, IT Home has learned. In addition, the S Pen will be bundled with the Galaxy S22 Ultra smartphone. In other words, Samsung's S22 Ultra will be a lot like the Note series, and some experts believe the goal behind the move is to move away from a dual-phone strategy and focus more on foldable devices. So even if Samsung sticks to the old naming scheme, the company is likely to market the S22 Ultra as a replacement for the Note series.

It has also been revealed that the upcoming Samsung Galaxy S22 series will be powered by Exynos 2200 chips with AMD Mobile Radeon Gpus and RDNA2 graphics. It's also rumored to have three rear cameras: a 50MP main camera, an ultra-wide Angle camera, and a 3x optical zoom camera. The Ultra version is expected to offer a 108MP main camera. Other features include a 120Hz display, stereo speakers, quick charging, wireless charging, and water resistance.

Meanwhile, the upcoming Galaxy S22 Ultra will support 45W charging speed, which is expected to be significantly better than the 25W used in the Galaxy S21. But the 45W charger is certainly not the fastest charger on the market, as some smartphones already use up to 120W for quick charging.

Related news
First batch of Snapdragon 898! S22 Ultra confirmation and Note integration: built-in SPen
It was reported that the Galaxy S22 Ultra had been renamed note 22 Ultra S22 Plus and the S22 Pro
Sources say the Samsung S22 Ultra will likely be called the Note 22 Ultra S22+ into the S22 Pro
Designer sharing Samsung Galaxy S22 Note Ultra Smart Concept Rendering Chart
One of the strongest dragons 898 flagship! Samsung S22 Ultra real machine first exposure: perfect
God seems to Note 21 Ultra! Samsung Galaxy S22 Ultra Rendering Dialect
Samsung's flagship is underrated: designed to win with the S22 Ultra
Samsung official website adjusts S22, S22 + parameter: The refresh rate suddenly changed
Note Series Return in Ultra, Samsung Galaxy S22 Series China Release
Samsung Galaxy S22 Ultra is about to launch a new Bora Purple
Hot news this week
At least 29000 facilities were affected, and WeiUnicom announced that there were serious loopholes in QTS and QuTS hero.
The source code of the official website shows that the Microsoft Build 2023 developer Conference will be held on May 23-25.
The rendered picture of Meizu experience Center is exposed: there are cars and mobile phones to build 1000 stores.
Musk, the richest man in the world, also suffered a huge loss when he bought bitcoin by Tesla, who "cut leeks".
256G is not enough! Bloggers bought Xiaomi phone 512G has used up more than 300G: WeChat accounted for 70G
Xiaomi tablet 6 key specifications steal run: high brush domestic screen Snapdragon 870 can also play!
Beihang Professor unveils FIG Leaf, consumer anger, Why is advanced technology difficult to win user recognition?
Regret that the medicine is gone! Apple closes downgrade channels for multiple versions such as iOS on 16-15-12.
Only high-end models have? The exposure of the periscope camera lens is limited to the iPhone 16 Pro Max
Meta earnings release analysts: Snap turning profit into loss in the fourth quarter is good news for it and Google
The most popular news this week
Microsoft's new version of Bing appears briefly: full access to ChatGPT
Bill Gates: the history of ChatGPT is as significant as "PC or the birth of the Internet"
Why does the United States keep cracking down on Huawei, but we don't do anything to Apple?
Samsung promises firmware update to solve the problem of plummeting Pro SSD health value
AI such as CEO:ChatGPT, parent company of "GTA5", will raise standards in the game industry.
Huawei's entry into the electric bicycle Tailing official announced that the combination of strong and powerful forces will open a new era.
Huawei P60 appeared and ran: it was quite unexpected to carry the processor.
Yingchi set foot in the game display for the first time: 27-inch 2K screen, 165Hz high brush
Who says Jixian can't play games? Evaluation of Lenovo's new Pro 16 2022 sharp dragon version
Domestic version of ChatGPT! Baidu version has successfully registered ERNIE trademark: opened in March