Lenovo's Hong Kong shares are up more than 7 per cent, and its application to list on the board has been accepted 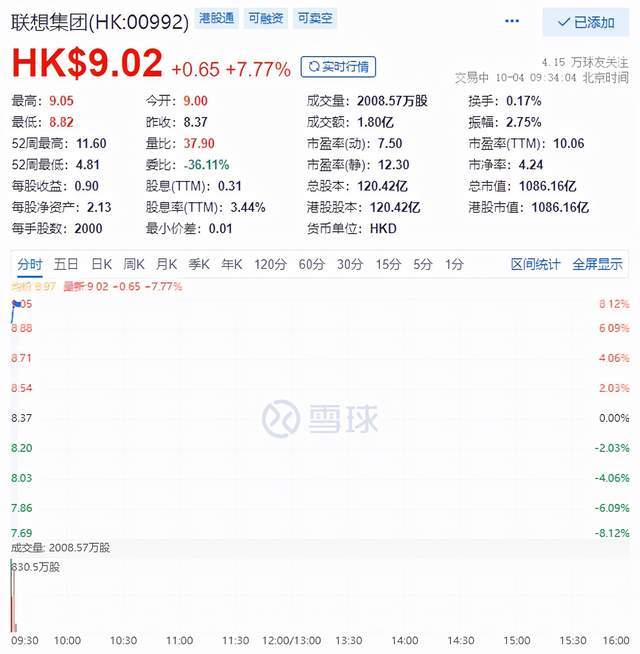 On October 4th Lenovo's Hong Kong shares opened at HK$9 a share, up nearly 8 per cent, with a market capitalisation of HK$108bn.

On the news front, Lenovo Group Co., Ltd. ("Lenovo Group") issued the Announcement on the Acceptance of proposals for the issuance of Chinese Depositary Receipts and Listing Applications on the Shanghai Stock Exchange on the Hong Kong Stock Exchange. The company has submitted to SSE the application materials for the proposed issuance of China Depositary Receipts and listing, and on September 30, 2021, it received a letter from SSE confirming the acceptance of the application, the statement said.

On September 30, the SSE website disclosed that Lenovo Group's application for listing of the Board of Directors had been accepted and that the company had submitted a prospectus for the public issuance of Depository Receipts by SSE. Lenovo Group intends to issue no more than 1,338 million CDRs in the current public offering, raising 10 billion yuan, according to the prospectus.

It is reported that this is the first red-chip enterprises in the form of CDR "back to A" listed companies since september 17, the CSRC issued "on the expansion of the pilot scope of red-chip enterprises listed in China." The sponsors are CICC and the co-lead underwriters are Goldman Sachs Securities and CITIC Securities. (| AI Finance News Agency Zhao Wei)