IT House October 8 Microsoft recently released a full version of Windows 11 for users who support Windows 10 (2004 or later), Windows Latest reported. While the upgrade has led to some design innovations, it also appears to have created a serious performance issue, with some users seeing incredibly high memory usage. 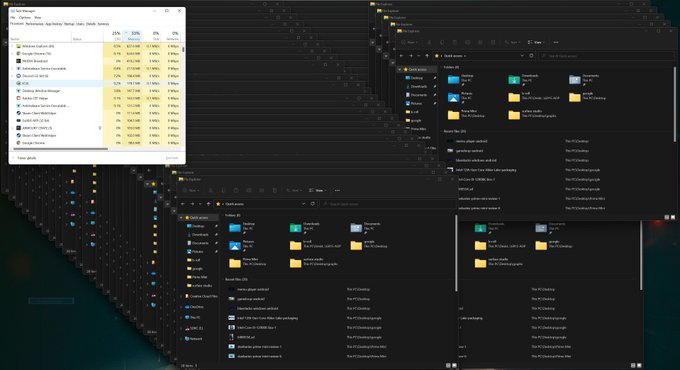 On Reddit and forums, users have been complaining that Windows 11 devices are now suffering from extreme memory usage. As a result, the performance of the entire device is affected and has a negative impact on game performance, resulting in a decrease in frame rate.

IT House learned that on Windows 11, File Explorer retains the familiar design of the Windows 10 version, but it is now based on the Windows UI Library (WinUI), bringing new icons, modern controls, buttons, and other visual adjustments.

The new layer of File Explorer uses mica material on the command bar/title, a design material that applies a desktop background to an application window. In addition, the Explorer's context menu (right-click menu) has been updated with Fluent's smooth design to match other parts of the operating system.

The message says the new version of File Explorer is responsible for the high memory usage of Windows 11. Processes listed as "Explorer .exe" in Task Manager are reported to cause resource spikes of 70-99%, and in some cases to the continued use of the device's processors.

As the user points out, the memory usage of the File Explorer increases each time the file explorer is opened.

Windows Insiders reported this bug last month, and then tested it on the Dev channel before Windows 11 was made available to all users.

However, it appears that these reports were ignored, or memory issues, and windows 11 was released with an error bug for a File Explorer memory leak.

In an article for Feedback Hub late last month, Microsoft noted that it had "included some changes in Windows 11 Build 22454 to mitigate several issues that caused leaks when using File Explorer."

This indicates that Microsoft has found a fix, but unless you're a Dev Channel tester -- you can access the next version of Windows 11 -- you'll have to wait a few weeks.

Microsoft has been testing the fix for more than a month, so it's likely that the company will soon release it as a separate patch.