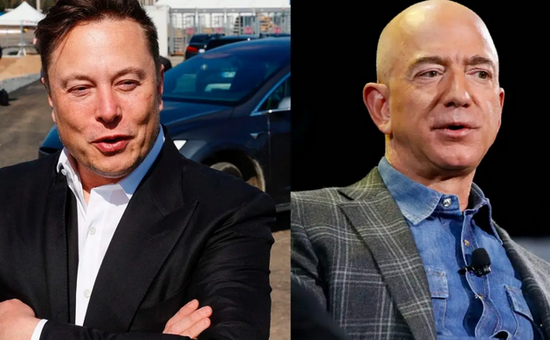 Sina Technology news Beijing time on October 12 morning news, it is reported that the war of words between Tesla boss Elon Musk and Amazon founder Bezos (and both companies) has become a landscape on social media. On Monday, Musk once again mocked Bezos's comments on Twitter, this time with a silver emoji.

The emoji is related to a statement Musk made last month. Musk's personal wealth previously surpassed That of Bezos to become the world's richest person. He said he would award Mr Bezos a silver medal and a statue of a "2". 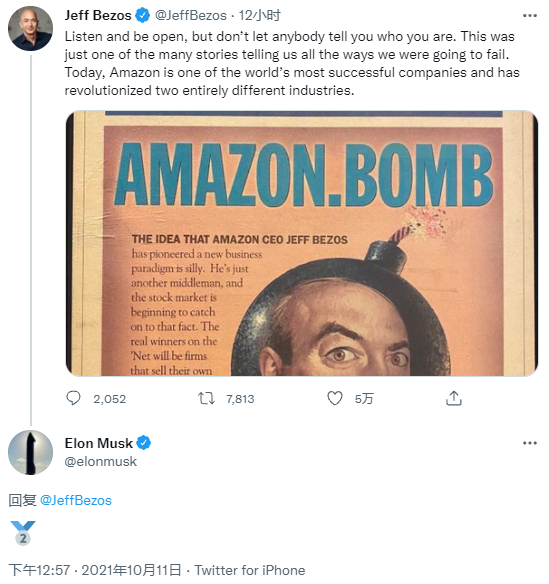 Musk's "number two" emoji was actually a response to Bezos's tweet on Sunday. In the tweet, Bezos talked about people who were skeptical of Amazon's growth in its early days.

"Listen and be open, but don't let anyone define you," Bezos tweeted. Today, he added, Amazon has become one of the most successful companies in the world and has disrupted two completely different industries."

Mr Bezos and Mr Musk have long been among the richest people in the world, but the gap is widening as Mr Musk's wealth grows rapidly. Musk has become the third person in history to surpass the $200 billion mark, according to media reports.

Musk's net worth jumped by $11 billion last week, largely due to a jump in the valuation of his private U.S. space company SpaceX. Just last Friday, SpaceX's valuation rose by a third to pass the $100bn mark, making it the second most valued private company in the world.

Over the past few years, Musk and Bezos have been neck-and-neck in personal wealth as the world's richest man. According to the Bloomberg Billionaires Index, Musk's personal fortune is currently estimated at $223 billion, compared with $191 billion for Bezos.

The two billionaires are rivals in many areas. Earlier this year, Bezos' private US space company Blue Origin accused SpaceX of unfairly awarding NASA a $2.9bn lunar lander contract. In August, Blue Origin filed a lawsuit in a FEDERAL court in the United States seeking redress.

Also in August, Amazon's satellite-broadband subsidiary Kuiper filed a complaint with the FEDERAL Communications Commission against SpaceX's plans to scale up starlink's broadband satellites. Mr Musk then quipped that Mr Bezos had retired from Amazon to devote himself to his "full-time job" of suing SpaceX.