Windows 11 is now being rolled out in phases and can be officially installed on supported hardware. Windows 11 is available as a free upgrade for Windows 10 devices, but devices that are not supported may not be eligible for future cumulative updates, according to a Microsoft statement. 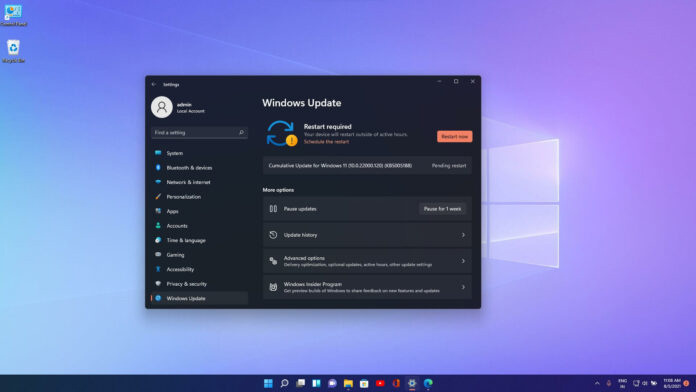 Still, it's clear that most Windows 10 devices will meet the performance requirements to run Windows 11, because Windows 11 is essentially built on Top of Windows 10 and is basically all about design improvements. However, Microsoft is enforcing strict hardware requirements to provide the absolute best security experience.

In a new video, Microsoft stresses the importance of the security features required for Windows 11. Windows 11 is designed with a strong focus on security, according to Microsoft. Windows 11 requires trusted platform modules (TPM 2.0), secure startup, Virtuality-based Security (VBS), etc. These security features are often included in newer devices and also raise the bar for upgrading.

Microsoft further explained that they wanted to set a standard for PC security with Windows 11 and that older devices were not supported because they lacked all of these security features.

It's worth noting that TPM or Secure boot was also available on Windows 10, but they are now mandatory to ensure a secure experience for Windows 11 users. A TPM is a physical or virtual chip used to protect encryption keys, user credentials, and other sensitive data.

Microsoft said: 'With Windows 11, we require new installations to use TPM 2.0 by default, which is supported by most computers built over the past five years.'

"If a machine gets hacked, we can help you minimize the damage. Windows 11 will block these types of attacks because we're using secure boot and trusted boot, and it uses both the REQUIRED UEFI and TPM hardware." "Secure and trusted startup blocks RootKits or bootKits that try to modify your early startup files," Microsoft adds.

Before setting strict requirements, Microsoft tested older hardware to determine compatibility with security features like TPM. Based on this, Microsoft has concluded that it is important to run Windows 11 on new or supported devices.

IT Home has learned that Microsoft also ran a series of tests on older hardware to determine performance issues when running Windows 11 with older processors. Microsoft's analysis shows that older devices experience performance issues, and users may experience frequent app crashes. Unsupported PCS may have up to 52% more blue screens than compliant PCS. On newer devices, blue screen errors have been reduced using modern driver update management and modern drivers released by Oems, which were not present on older devices.

Related news
Microsoft Build Conference: Windows Retreat, Microsoft Rebirth
Yesterday, I "installed" Windows 1.0 again.
The Windows notepad has now been put on sale in the Microsoft Store (chart)
Microsoft defender won the best windows 10 antivirus software with a full score of 18
Windows 7 cannot upgrade windows 11 directly: it can only be completely installed
Windows 11 is available today! Four changes are worth having
Hot news this week
"Used car salesgirl" appeared on the webcast platform: netizens were angry because of their exposed clothes
Microsoft CEO NADELLA is most concerned about three things: ubiquitous computing, AI big model and virtual online
Documents show that Huawei SMIC received export licenses worth hundreds of billions of dollars even after being blocked by the United States
Huawei SEMICONDUCTOR Manufacturing International received export licenses worth hundreds of billions of dollars from the United States
Jia Yueting is paying back the money again! Faraday's future former employees in China receive a pay rise
Li Yundi involved in the yellow, cancelled the Membership of China music Association, "the brother who broke through the thorn" speed play code
The storage chip faucet is 119 times the first three seasons, the chairman reporter is born, "cattle scattered" did not lose the position.
The United States requires handover data desktop power helpless compromise: only hard is the most critical
Double 11 copy reserve price: Jingdong plus / Youku / Mango TV / Baidu online disk and other members 3 fold
Xiaomi folding screen flagship to face the heavy upgrade! Xiaomi executives dramatized the three core
The most popular news this week
Video | Apple App Store glitches can't be searched accurately
Video| A volcano in Spain has been erupting for a month! Expert: Or it will last three months
The Ministry of Commerce is talking about e-commerce development plan: strengthen anti-monopoly, prevent capital disorder expansion
The chip crisis has left India's top carmakers unable to produce cars and unable to fill orders
Tesla will gradually turn into new energy tracks into new energy tracks in a number of lithium iron phosphate batteries.
Ping An China: Total assets exceeded 10 trillion yuan in operating profit for the first time in the first three quarters, up 9.2% year on year
Tesla Beijing has added a used-car dealership business
Tencent video iQiyi responded that VIPs also need to see advertisements: only free of opening ads
Tencent apologize: "The king glory" IP new tour "code - zero" poster plagiarism
Intel On Technology Innovation Summit held: the launch of 12 generation Core processors will establish a unified developer zone