Recently, Tesla was trending again,Tesla's owner, Mr. Chen, apologized to Tesla and paid 50,000 yuan in compensation after he was sued by the company.

Tesla China sold 56,006 new cars in September, up 27% month-on-month and 394% year on year, setting a record delivery period, according to the company's official release today.

The coexistence of sales myths and controversies has been the most distinctive feature of Tesla's entry into the Chinese market.However, Tesla not only disputes with the owners of the lawsuit, but also the employees who work for tesla are not immune to the efficient and powerful legal weapons.

Today, an online user named “ Special law or civil law? "Posted a netizen who revealed that his eyes were injured by foaming equipment used in painting production during his work at a Tesla factory. And then,Tesla, however, used all kinds of dirty tricks to trick itself, and finally received a notice of termination from Tesla HR. And put the responsibility on themselves, because of the violation of safety regulations to cause their own injuries, and kicked out of the factory! 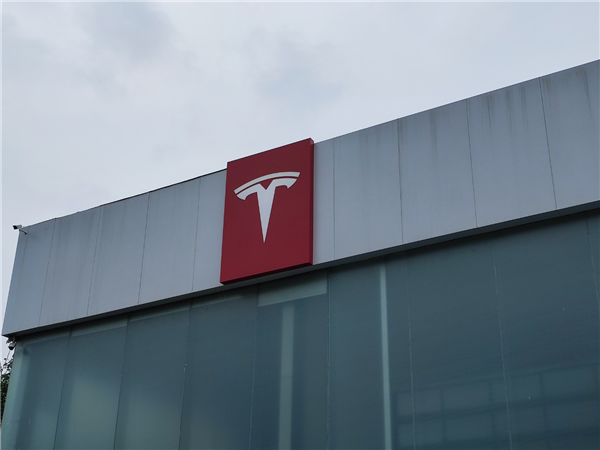 The following is the full text:

Hello, everyone. I am the person involved in the forced dismissal of Tesla for work-related injury.

On October 25, 2020, my eyes were injured by chemical liquid spraying from the equipment when I was repairing the foaming equipment for coating production in the night shift. That night after the injury, I was sent to the hospital with severe eye pain and could not open. The doctor diagnosed chemical burn of cornea.

I thought that if I recovered from the injury, I would continue to work there and let them arrange, but it turned out that they were just trying to get the doctor to issue a certificate of recovery so that they could deal with me.

The doctor told them how they could get a clean bill of health if their eyes weren't healed,Dragged me to and from the hospital every day and I had no way to tell the leader that I would not rest and go back to work.

Not long after I started,The leader came to me and asked me to sign the accident responsibility certificate, saying that I was responsible for the accident, and took several photos of me closing my eyes when I was still ill on the night shift.

Then I called HR and sent me a notice of termination of the contract, saying that I violated their safety regulations. I told HR that safety problems always existed, and the labor protection glasses were issued to me after my accident. The foam gun failure often occurs.We were not taught to wear protective glasses when we were working, and all the maintenance personnel I called did not wear safety glasses when they were working together.

I told you on the spot it was illegal, and I needed a work injury. They just took pictures of me and confiscated my work permit and kicked me out of the factory.

On December 8, 2020, I went to Shanghai Putuo to apply for labor arbitration. To my dismay and disappointment, the judge and the secretary, especially the clerk Wang Yi, still defended Tesla in the whole process, even though Tesla provided a false certificate for my signature of safety training. (I will also mention this Wang Yi in the second trial later, you can mark it)

The arbitrator of the first instance repeatedly said that they did not support the resumption of labor relations I proposed and asked me to sign the conciliation document, but I did not agree. After the arbitration of the second trial, I because of eye discomfort, my wife accompany me to court.

The whole arbitration process is gratified by judge Liu Wen of the second instance, the fair arbitration judgment supports my claim to restore labor relations. But it never occurred to me that Wang Yi, the clerk, left tesla a hand and omitted to write a clause in the ruling. If the parties are not satisfied with this award, they may bring a lawsuit to the people's court within 15 days from the date of receipt of this award. Which directly changes my ruling from 15 days to 30 days.

The strangest thing is that the indictment against me was passed without any cause on it. It has been almost half a year since the court hearing was accepted, and the court has been adjourned.

Tesla has not yet responded to a request for comment. 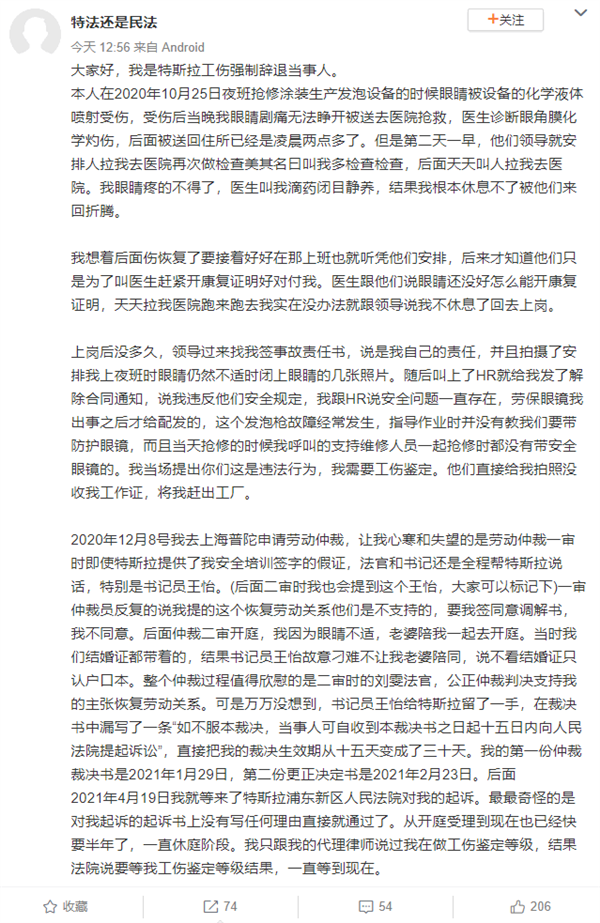 Related news
NVIDIA Tesla v100s low-key release: full speed up to turn into Tu Haojin
Hot news this week
Lu Jian, president of linkedin China, responded to rumors of the "closure of linkedin China" by saying that the company will increase its investment in China even if it does not reduce it
Huawen: Increase IPv6 + Technology Innovation Helps my country's continued leading the next generation of Internet innovation
Lenovo refutes rumors "Liu Chuanzhi 100 million annual salary" on the entrepreneur's "stigma" when to rest?
Net-a-world Liu Chuanzhi annual pension of 100 million yuan, Lenovo Holdings dispelled rumors: serious misrepresusion
The video asked Net-a-Lago to apologize
The world's richest man, worth $1.3 trillion, has launched a homegrown game: He can't wait to play it
The United States has first released electronic cigarettes, and the fog core technology rose 15%, and what impact will 400 billion markets will meet?
Infringement of Samsung Trademark Dedicated to Shenzhen Post Office Customs seized over 100 mobile screen
Meituan engineers responded to "frequent positioning" : suggest caution in downloading some overseas privacy software
I can't play! The official solution to the bug in Chinese Paladin vii was provided
The most popular news this week
Exposed Miha tour is developing 3A level new IP works project has been promoted for 11 months is still not announced
WeChat collapses! Users cannot send and receive pictures and files, WeChat response: gradually recover
WeChat responds to "crash": Apologize to users has been gradually restored
WeChat collapses! The picture has not been sent to respond: in emergency repair
WeChat's response collapsed: the sending of pictures and files failed and has been gradually restored
Tea Yan Yue color business scope of new wine sales Tencent Millet indirectly hold tea Yan Yue color
JD.co.u. auto parts app online, plus code after the car market
One million Tencent shares were traded in block trading at HK $493.825 each
September 2021 Top 10 of the world's most popular mobile gaming revenue: Original God topped the list
Apple's self-developed Mac chip is the ultimate hit: or the M1 Pro and M1 Max, major upgrades to the GPU core