Zhengzhou Jinshui District tax bureau collected 6.624,400 yuan from an Internet celebrity, Zhengzhou Evening News reported. The incident was also trending on Weibo on Monday afternoon. Since the beginning of this year, the Publicity Department of the CPC Central Committee, the National Radio and Television Administration, the Ministry of Culture and Tourism and other departments have issued relevant documents to promote the healthy and orderly development of the cultural and entertainment industry.

Income to the state Treasury

Recently, The Taxation bureau of Jinshui District of Zhengzhou city used big data to realize automatic data extraction from the information system, and increased the tax collection and management of employees in the entertainment field, collecting 6.624,400 yuan of tax from an Internet celebrity and collecting it into the state Treasury.

It is understood that in the "natural person electronic tax bureau" platform of the remittance of unpaid tax data in the routine monitoring, the bureau of tax administration two units in the system found that the Cultural road tax bureau has a large amount of unpaid tax in 2020 settlement is questionable. The staff immediately communicated with the Wenhua Road Tax bureau to understand the ins and outs of this tax.

After receiving this information, cultural road tax bureau tax staff immediately began to understand the situation. The household registration administrator contacted the taxpayer for many times, but the taxpayer did not answer his phone. Later, the staff contacted his employer to learn about the large amount of declaration from the enterprise. The financial staff of the company said that the taxpayer was a network anchor. Up to now, the taxpayer has settled taxes in 15 installments, paying a total of 6.346,600 yuan in taxes and 277,800 yuan in late fees, totaling 6.624,400 yuan.

We will strengthen tax administration of celebrity entertainers and network anchors

Earlier, the State Administration of Taxation (SAT) found through tax big data analysis that two network anchors, mainly engaged in e-commerce and livestreaming, were suspected of evading tax by hiding personal income and changing the nature of income.

In September 2021, the Special Commissioner's Office of the State Administration of Taxation in Shanghai coordinated with tax authorities in Zhejiang and Guangxi to put the two anchors and related enterprises on file for investigation in accordance with the law. It was found that the two anchors were suspected of illegally changing their personal income into business income, making false declarations and paying less personal income tax, with a large amount of tax involved. At present, the case is under examination, for the confirmed acts of tax evasion, tax authorities will be dealt with seriously and exposed in accordance with the law.

On Sept. 18, the General Office of the State Administration of Taxation issued a circular calling for further strengthening of tax management for employees in the entertainment sector. 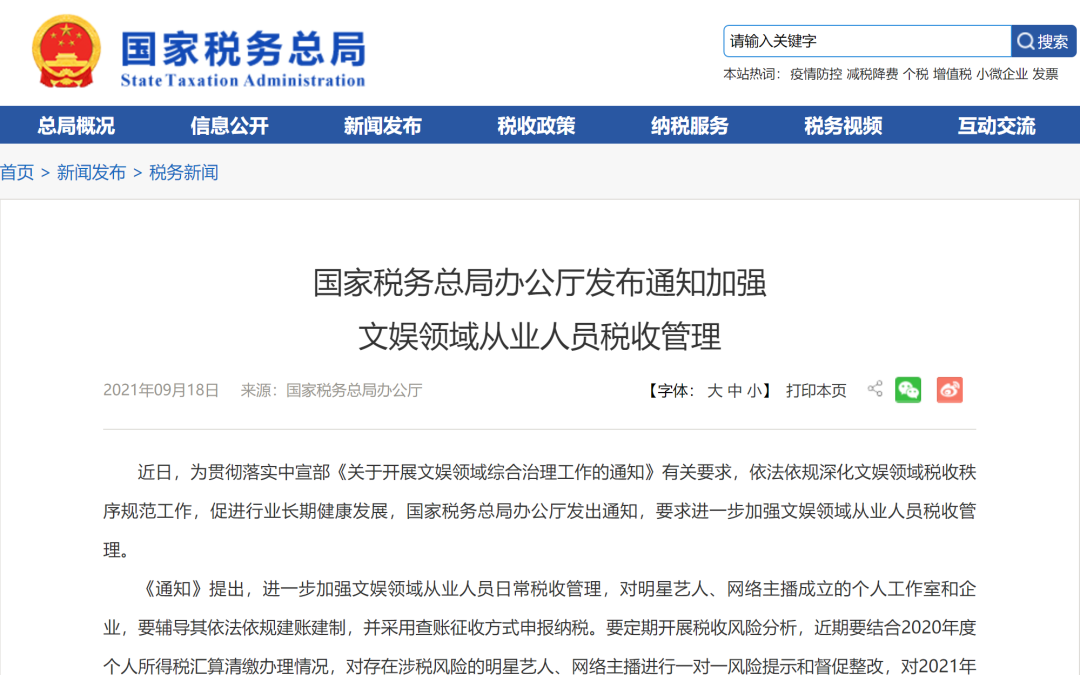 The circular proposes to further strengthen the daily tax management of employees in the field of entertainment, and to guide the individual studios and enterprises established by star entertainers and network anchors to set up accounts in accordance with laws and regulations, and to declare and pay taxes by auditing accounts.

According to the notice, tax risk analysis should be carried out regularly. In the near future, star entertainers and network anchors with tax-related risks will be given one-to-one risk reminders and urged to rectify based on the situation of individual income tax settlement and payment in 2020. It is necessary to carry out the "double random and one open" tax inspection on star entertainers and network anchors regularly, and increase the deterrent and exposure of typical cases of tax evasion and evasion in the field of entertainment according to laws and regulations, based on facts and laws as the criterion.

The notice requires that efforts should be made to strengthen the tax management of star entertainers, network anchors' brokerage companies, brokers and related producers, urge them to fulfill their individual income tax withholding obligations in accordance with the law, provide relevant information and cooperate with tax authorities to implement tax management of star entertainers and network anchors in accordance with the law. It is necessary to standardize the management of tax-related preferences in the field of entertainment, and tax authorities at all levels shall not implement all kinds of tax-related preferences that are set up illegally or implemented in flexible ways.

The field of entertainment is facing a full range of renovation

Since the beginning of this year, the Publicity Department of the CPC Central Committee, the National Radio and Television Administration, the Ministry of Culture and Tourism and other departments have issued relevant notices to strengthen governance in the cultural and entertainment field, regulate market order and promote the healthy and orderly development of the cultural and entertainment industry.

On September 2, the Publicity Department of the CPC Central Committee recently issued the notice on the Comprehensive Management of cultural and entertainment fields, which has deployed comprehensive management work for prominent problems in the field of cultural and entertainment, such as traffic first, "rice circle" disorder, illegal moral loss and so on. The notice puts forward specific requirements and working measures from seven aspects: standardizing market order, compacting platform responsibilities, enforcing content supervision, strengthening industry management, strengthening education and training, improving system guarantee, and strengthening public opinion and publicity.

In this regard, the head of the relevant department of the Central Publicity Department once said when answering the media's questions that in this comprehensive management, on the one hand, the market should play a positive role, guide the benign interaction between capital and industry, strengthen the social benefit assessment of cultural and entertainment enterprises, and promote them to shoulder more social responsibilities. On the other hand, we will strengthen capital supervision, crack down on illegal activities such as illegal production, resist sky-high movie salaries, and severely punish tax evasion.

On September 2, the General Office of the National Radio and Television Administration issued a notice on further strengthening the management of cultural and artistic programs and their personnel. It made it clear that it would strictly punish entertainers who violate the laws and ethics, and the disorderly appearance of "rice circle". One of the requirements, the strict implementation of actors and guests pay regulations, strict pay management inform commitment system. Encourage actors and guests to take social responsibilities and participate in public welfare programs. We will take serious punishment for violations of remuneration rules, "yin-yang contracts," and tax evasion. 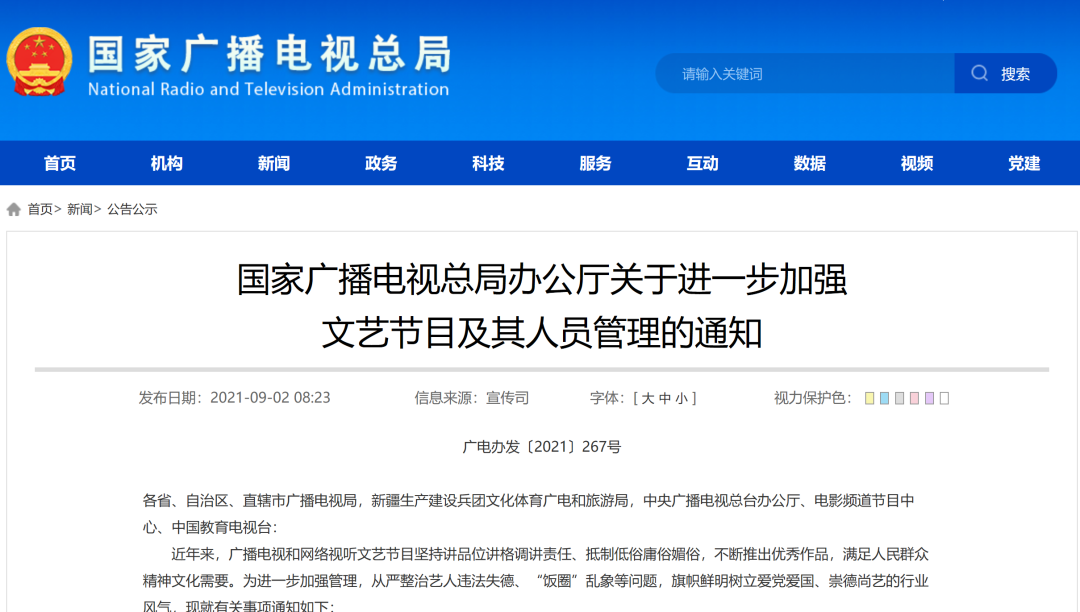 △ Source: The official website of the National Radio and Television Administration

Released on September 18, culture and tourism, culture and tourism of the standard performance brokerage behavior in order to strengthen the management of actors to promote the healthy and orderly development of market notification (draft) ", clear the main body qualifications strictly management, regulation and strengthening the performance of actors, fans, positive guidance, to build a good ecological performance. Among these requirements, actors and actresses engaged in commercial performance brokerage activities shall hold a certificate to work on the post, and the cultural and tourism administrative department shall revoke their qualification certificates and make an announcement for serious violations in their business activities.

Related news
The linely group's best mobile processor of the year: God u Kirin 810 wins the title
REAL AND GENUINE ONLINE LOVE SPELL CASTER TO BRING EX LOVER
Youth is over! Tencent's proxy sports game FIFA online 3 is out of service
DR. Murugu IS THE BEST SPELL CASTER ONLINE WHO RESTORED MY B
Real online spell caster to help bring back ex husband 2021
Hot news this week
Biden signed a chip and scientific bill, a video call of WeChat iOS internal test suspension window, the advanced CPU caused Win11 to be difficult to use, Huawei new machines enter...
How to regulate the "broken card" operation to crack down on electrical fraud to prevent "accidental injuries" with cards?
Musk's eyes! Lei Jun released a full -size humanoid robot Xiaomi self -developed strength explosion table
Japan has confirmed that China has overtaken the US for the first time in the world's top three indicators of scientific papers
iPad 10 will be absent from iPhone 14 conference: October appeared on Apple's last non -comprehensive tablet tablet!
Kuaishou TOB business Yu Bing: Self -developed chips or mass production after the end of the year, the video must be turned into light industry
The three major indexes of the US stocks opened sharply: ROBLOX fell more than 4%, Twitter and Tesla rose more than 3%
The global streaming media have increased the animation circuit is becoming a new "breakthrough" for Youaiteng
After selling Tesla for $6.9 billion, Musk said he was not selling it, but a survey said he was still selling it. The title of the world's richest man may not be guaranteed next ye...
Meizu Pandaer Great: All products are reduced by 200 and 30 -containing mobile phone cases, heat dissipation back clamps
The most popular news this week
Pet dog infecting monkey acne suspected "Human Poor" American CDC Reform Control Guide
Space Launch System to Fly for First Time
Tencent's second-quarter net profit fell 56% from a year earlier to 18.6 billion yuan
Fabless customers cut back on chip orders affecting Q4 capacity utilization
Washington's suspicion of TIKTOK exacerbated: How will the Bayeon government weigh it?
Pinduoduo launched its cross-border e-commerce platform in the United States in September
Put an SSD in your phone: from 2,499 yuan
China's largest general purpose drone! The first five flights were successful
IPhone 14 to be released alongside Huawei Mate 50: Which bangs do you choose?
Tencent's agent of the Russian war online game announced the suspension: Customs Customs in October