Xiaomi appointed Li Xiao Shuang as a vice president of Xiaomi Motor, CFO Lin Shiwei, and the CEO of Stars 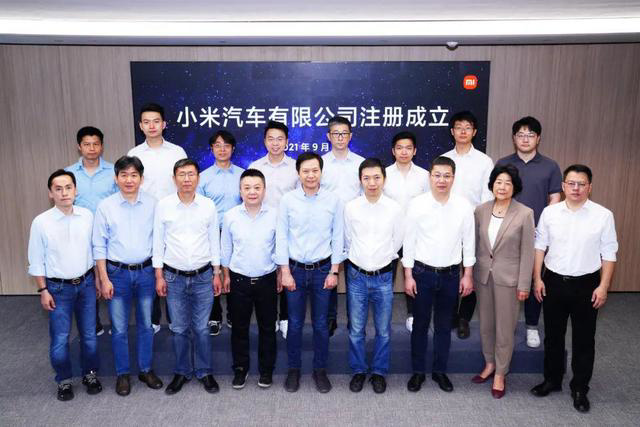 On September 1, Xiaomi announced on the official WeChat public number to formally completed the automotive registration of the automotive company. At this time, the Radixing Jun was in the end of March 5 months. In addition, the Lei Jun also issued a team of teams. In this 17-person team, Xiaomi's executives stand in front.

Lei Jun said in WeChat blessings. In these five months, the team conducted a large number of user research and industrial chain inspections, investigation and interviews more than more than more than ten domestic cooperation, and advancing Car product definitions and team buildings. In addition, Xiaomi also acquired DeepMotion Tech, focusing on the strength of automotive related technologies and personnel. The Lei Jun also revealed that the current Xiaomi cars have already formed a team of about 300 people.

IT House understands that Li Xiao Shuang graduated from Beijing University of Science and Technology, and graduated from Beijing University of Technology. After graduation, Li Xiao Shuang joined the Multi-Pest Technology Co., Ltd. founded by Xiaomi Group Joint Founder Wangchuan, as a manager of the user experience department, product design director. In 2012, as Xiaomi's acquisition of many readings of the science and technology, Li Xiao Shuang, who was mostly reading the product director, also added to Xiaomi. At the end of the same year, Li Xiao-Shuang participated in the design of Xiaomi box products. Since 2015, he began to serve the Director of Xiaomi TV Products, and later had been doing the general manager of Xiaomi Group's University Electrotechnics. When the Lei Jun was investigating Guangqi Yan, Li Xiao Shuang has also accompanying.

The following is the full text of the announcement:

Decided by the Group's management research, the following organization adjustments and cadres appointed:

1. Appointment of the vice president of the group, CFO Lin Shiwei and the CEO of Star Course, and the relevant work report to Hong Feng, chairman of the Stars.

2. Appointment of the Vice President of Stars and Vice President, Zhao Wei, and the chief product official of Tianxing 's number, reported to the CEO of the Stars.

(1) The original credit business unit and the financial science and technology platform department are combined into the credit technology business unit, appointed the general manager of the Digital Industry Finance Department, Yue Kai, and the head of the credit scientific and technological business department, and report to the general manager of the Digital Retail Finance Department.

(3) Appointment of He Tao as director of payment business, report to the general manager of the retail financial department.

(4) Appointment Wang Haiyi as director of the International Office and reports to Lin Shiwei to the General Manager of Retail Finance.

2. Appointed Liu Anxi, reported on the Ministry of Political Committee of Xiaomi Automobile, and reported to the Minister of Organization for Group.

This appointment is entered into force, and this notice is hereby notified.