On October 15, Antutu released the user preference list for the third quarter of 2021, which is based on the configuration of antutu users from various dimensions, such as screen, processor, ROM/RAM, and finally breaks down the proportion of each data item.

Take a look at the configuration of everyone's phone, and where does your phone rank in each dimension? 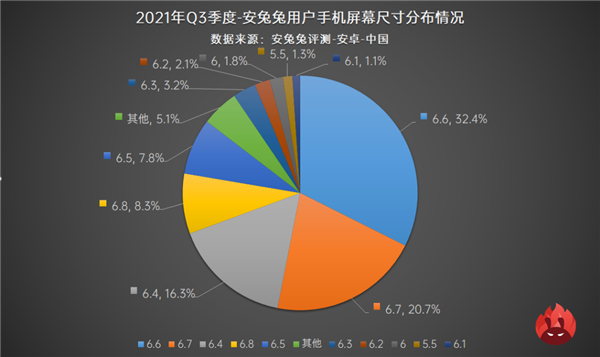 From the distribution chart, 6.6 inches accounts for the highest proportion, reaching 32.4%, followed by 6.7 inches, accounting for 20.7%. The sum of the two accounts for more than half, which is the common size of mainstream models. 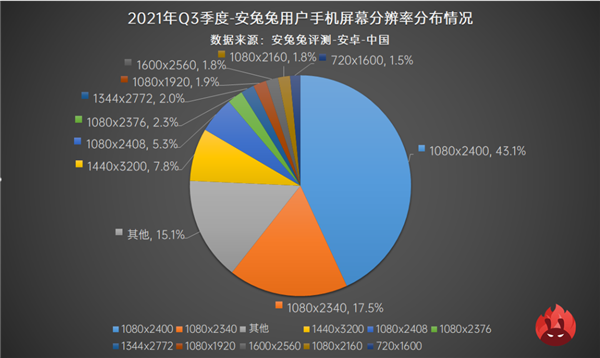 The distribution map shows that 1080P continues to dominate, with a total of 60.6%.

Screen refresh rate: High brush is a must 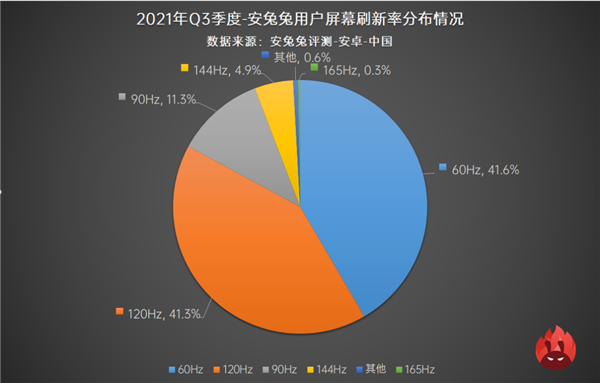 From the distribution chart, the largest share is still 60Hz refresh rate, which is 41.6%.However, according to the high brush threshold above 90Hz, the ratio of high refresh rate has exceeded 60Hz, among which 120Hz accounts for 41.3%, and the refresh rate of most new machines is basically the same.

There is also room for 90Hz and 144Hz, the latter mainly for gaming phones. 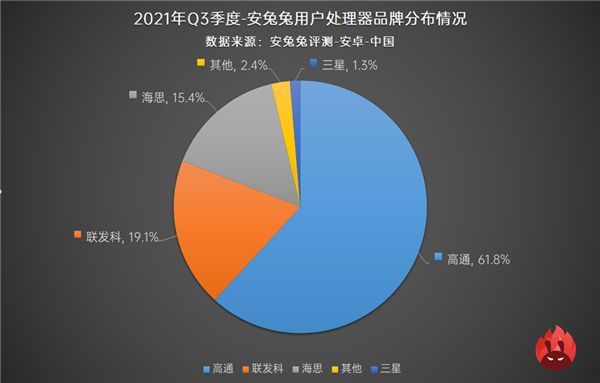 Mediatek's share has surpassed Qualcomm's to become the world's largest smartphone chip supplier, but Mediatek's strength is mainly in the mid-range, and Qualcomm is still dominant in flagship.

However, the distribution map published by Tutu shows that Qualcomm takes the first place with a 61.8% share, followed by Mediatek with only 19.1%. Why is the share of Qualcomm far exceeded that of Mediatek by Users of Antutu? The main reason is that many of Mediatek's mobile users don't score at all.

Haisi's share did increase compared to last quarter, probably due to the sales of Huawei P50 series. 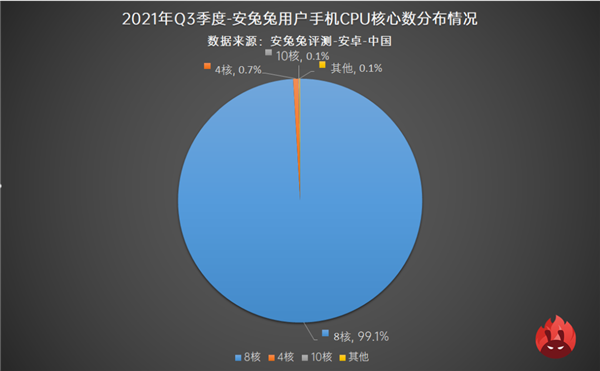 Data show that the use of eight core processors accounted for 99.1%, including qualcomm, Mediatek, Haisi and other brands, and ten core and four core should be some users of the standby machine, the basic is not retired old models, and last quarter is basically the same.

Memory: 6GB is the threshold 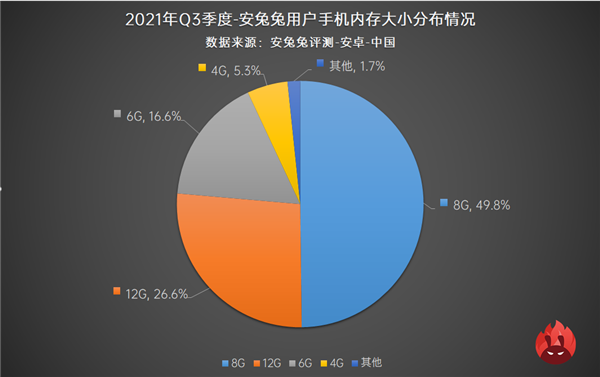 According to the distribution chart, 8GB accounts for 49.8%, which is the standard configuration of many flagships, followed by 12GB, which accounts for 26.6%. The reason is that users begin to pay attention to the advantages of RAM, adding a few hundred yuan, daily use can be more smooth, and more apps run in the background. 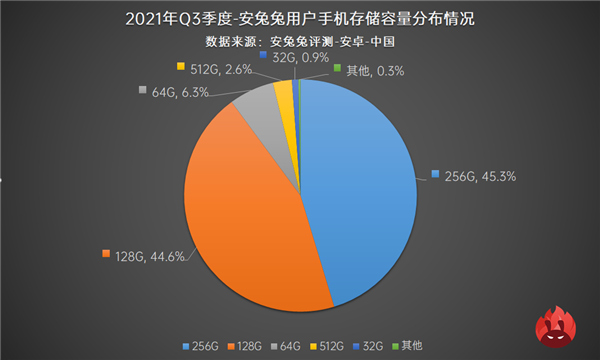 According to the distribution chart, 256GB accounted for 45.3 percent of the total, followed by 128GB at 44.6 percent. 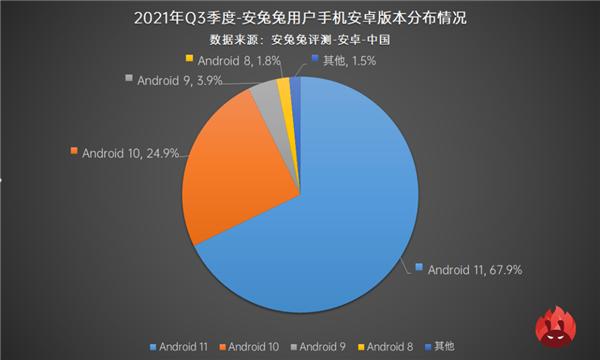 Every time there is a major Android version update, domestic leading manufacturers will soon launch a public beta version based on the new system, especially in the last two years, almost with the Pixel series to try new, promoting part of the process.

However, the distribution shows that Android 11's share is 67.9 percent, a modest increase from the previous quarter, and that nearly 30 percent of the market is below Android 11. Given that Android 12 was released earlier this month, this figure is slow. But Android still has a long way to go to address fragmentation. 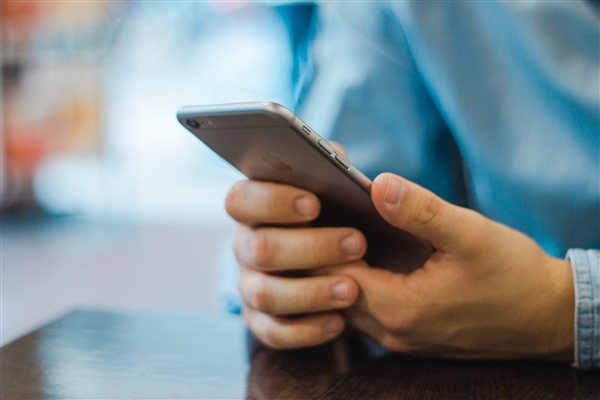 Related news
Brushing and shaking hands on the 43-inch vertical TV experience? Samsung launches The Sero TV (picture)
The linely group's best mobile processor of the year: God u Kirin 810 wins the title
"Generation God U" Kirin 810 gets The Linely Group's annual "Best Cell Phone Processor Chip"
Hot news this week
Apple store staff committed suicide due to work pressure?
Xiaomi has issued a patent for autonomous driving, which can automatically adjust its driving ability according to the road class
U.S. inflation blasts Nearly half of households aim to live: the price of the commodity has gone up outrageously
Jiangsu Bank's Beijing branch was fined 4.9 million for "seven crimes" involving the illegal issuance of loans
Alipay announces automatic identification of automatic identification of vehicles to enhance the quality of drivers
Huawei has released a patent on the packaging structure that solves the problem of black spots on display panels
More than 20,000 domestic Model Y "broken shaft" recalls Tesla's ability to dump pots surprised netizens
Browser Search Engine Giants Quasi-Upgrade Microsoft to issue an unsafe warning to 2 billion Chrome users
Could new SEC rules prevent Chinese companies from listing in the US? The Foreign Ministry responded: firmly opposed
The U.S. blocked Avista's acquisition of chip giant ARM, fearing it would hurt competition and neutrality
The most popular news this week
After being disclosed, Canada Goose Commitment: Strictly abide by China Laws and Regulations
What signal? Italy fines Amazon $1.28 billion, bypassing the EU
Adobe is buying social media marketing company ContentCal
Plum blossom venture investment Wu Shichun: this year's new consumption apparently appeared an overheating or bubble phenomenon
What are the pain points and difficulties of innovation? Gome Dujuan: The system's internal consumption and mechanism of the short board
Canada Goose Update China Return Service Commitment: Tags are intact, support for free replacement
In history, the most expensive space package machine billionaires in front of Zemou make a success into the International Space Station.
China Space Station's first space teaching event has been a complete success!
Yumei Technology's final case did not perform the amount of more than 95 million chairmans were limited
Apple TVOS 15.2 RC Preview Publish