Intel said this week that IT has successfully tested power on the computing module of its Meteor Lake processor, which is expected to ship sometime in 2023. The Meteor Lake processor will most likely be Intel's 14th generation processor, with the first computing module to be produced using Intel 4 (7nm) technology, and Intel says the performance is in line with the company's expectations for this stage of the CPU development cycle. 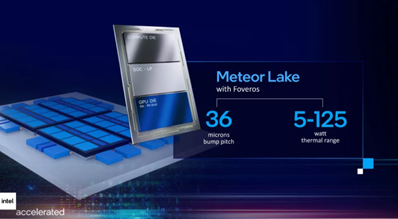 "The computing module of the new Generation Meteor Lake processor has been on-stream with Intel 4 processes and will be in preproduction this quarter," Said Pat Gelsinger, Intel's CHIEF executive officer, during the company's earnings call this week. "It performed well during the 30-minute power-on test, as expected. Overall, this is one of our best proprietary products in a while and proves that our process development is going well."

Power-on testing is an important milestone in product development, indicating that the first version of the product can be started and work smoothly. At this point, no one is expecting breakthrough performance or 100 percent stability from the first version. The purpose of testing it is to show off all the new features of the product, so that developers can adjust the design and consider the margin of their development platform. 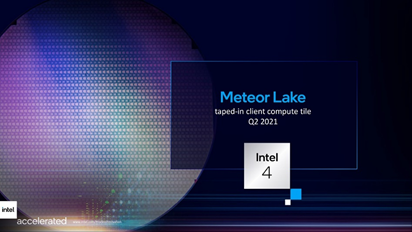 IT Home understands that Meteor Lake will be Intel's first Foveros processor, and will be equipped with an unknown number of Ocean Cove and Gracemont performance cores. It will be complemented by 96EU to 192EU core graphics cards. SoC chips such as memory controllers, PCIe controllers and Thunderbolt controllers are also included in the package. It is worth noting that Intel expects the TDP of the Meteor Lake family of processors to span all power levels from 5W to 125W, indicating a wide range of applications for this generation of processors.

Related news
Deep analysis of Ice Lake architecture Intel's Athena goddess
Intel meteor Lake 13 generation core appears! 7Nm hard to carry amd 5nm zen4
Intel began working on Linux hardware patches for Meteor Lake (chart)
Intel is starting to push Linux hardware patch for Meteor Lake
Intel said that the multi chip architecture was used for the first time in the trial production of 7Nm process meteor Lake processor Q3
Intel: Next generation Meteor Lake processor computing module in preparation
Intel 14 Core CPU live "fruit photo" first announced: 7nm process is powerful
For the first time, Intel "4nm" core was used in EUV process to successfully run Win and other three systems
Intel denied that Meteor Lake's processors are behind schedule and that consumer chips are still on track for 2023
Hot news this week
China has found 35 known cases of the new zoonotic virus Langya
Losses in a single quarter of $ 23.4 billion a record, SoftBank did not carry the plunge of technology stocks and the devaluation of the yen
The prevention and control of the American Monkey epidemic has failed. What should I pay attention to?
Kuaishou launched a self-developed cloud intelligent video processing chip: The chip has been streamed successfully
The new product of Xiaomi MIX is coming: both internal and external dual -screen has been upgraded to make up for the previous generation.
Ministry of Public Security: Single telecommunications network fraud continues to cause 40 % of all electrical fraud cases
A new zoonotic virus, Langya, found in China has not yet been confirmed to be transmitted from person to person
A tech company in Shanghai has been fined 220,000 yuan for swiping orders to improve its ranking on Yelp
Special price "kill ripe"? Bike-sharing platforms have different prices for the same package for different users
Alibaba: Shareholders SoftBank will settle in advance for advanced payment in advance involving a maximum of about 242 million ADR
The most popular news this week
Industrial star attraction strategy to cope with the American semiconductor strangulation strategy
"Mother of the Chip" suffers! The United States blocked EDA to China: not so simple
8K Super Clear screen records Lingyue of China Space Station! Only 0.72 seconds
Sell to Tencent less than a year Sogou by the big purge: three major businesses are gone
After being suppressed by the United States, why did Ren Zhengfei thank you?
The fightback is coming! After ditching 34 Chinese suppliers, Apple was decisively rebuffed by two Chinese companies
Too sudden! The United States is clamping down again
Why is brain labor tired? Scientist: The brain can make poison
The AMD RX 7000 graphics card has a new name: a school of fish
Bitcoin bear market effect transmission: Bitcoin Mining, Yibang International was delisted warning