Hertz, the US car-hire giant, has reportedly placed an order for 100,000 Model 3s from Tesla.It is also the largest electric car purchase ever, bringing in about $4.2 billion for Tesla.

Hertz is the second-largest car rental company in the United States, with about 770,000 vehicles. Hertz's customers will be able to rent the Tesla Model 3 in parts of the U.S. and Europe and will expand further by the end of the year, Hertz said.

Mr Hertz said electric cars would account for more than 20 per cent of the company's global fleet, based on current orders.

Recently, a blogger revealed that Hertz has officially opened the Tesla Model 3 lease. But the price is slightly more expensive than the same class of fuel cars. 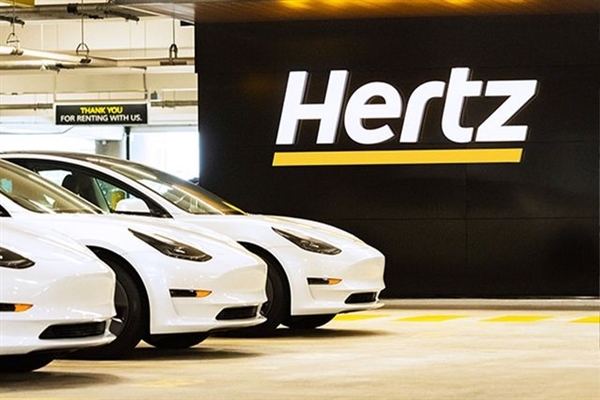 Related news
Can be used as a trailer with Volvo polestar2 and show muscle Tesla Model 3
Tesla Model 3 sales hit a record in 2019: more than 300000 units sold in the whole year
Avoid being "stuck" by Panasonic! Tesla will save another 4000 yuan by building its own battery plant, model 3
China-made Tesla Model3 is better than U.S. imports
It's not worth 56000 yuan! Tesla Model 3's self driving does not live up to its real name in consumer report
The model 3 test failed many times, causing the dummy to crash into the air. Tesla responded that the video was taken out of context
Model3 test failed many times will dummy fly hot discussion! Tesla: Don't get out of context
The biggest electric car order ever! Hertz rental car on-line Tesla Model3: Expensive
Tesla fell more than 5% after Musk tweeted that the Hertz deal had not yet been signed
Tesla is in talks with Hertz on delivery dates for electric cars, according to foreign media
Hot news this week
Apple store staff committed suicide due to work pressure?
Xiaomi has issued a patent for autonomous driving, which can automatically adjust its driving ability according to the road class
U.S. inflation blasts Nearly half of households aim to live: the price of the commodity has gone up outrageously
Jiangsu Bank's Beijing branch was fined 4.9 million for "seven crimes" involving the illegal issuance of loans
Huawei has released a patent on the packaging structure that solves the problem of black spots on display panels
More than 20,000 domestic Model Y "broken shaft" recalls Tesla's ability to dump pots surprised netizens
Alipay announces automatic identification of automatic identification of vehicles to enhance the quality of drivers
Browser Search Engine Giants Quasi-Upgrade Microsoft to issue an unsafe warning to 2 billion Chrome users
Could new SEC rules prevent Chinese companies from listing in the US? The Foreign Ministry responded: firmly opposed
The U.S. blocked Avista's acquisition of chip giant ARM, fearing it would hurt competition and neutrality
The most popular news this week
AMD YES! Musk praises Tesla's 'Witcher 3'
Standard Snapdragon 8 Gen1! Exposure millet 12 Pro released this month: screen specifications are higher
A Japanese billionaire has flown to the International Space Station on the most expensive charter flight in history
US group public bag app: system network abnormal recovery rider can be delivered normally
Visa CFO: The company can solve the problem with Amazon, and the relationship will resume as it did
Yumei Technology responds to employees: there is cash compensation and option compensation, and the company operates normally.
Abandon ARM! Huawei's all-self-research chip announced: new architecture CPU plus holding
It is 200 million to learn Tesla Volkswagen will be involved in clean energy construction.
TNGA + hybrid! Toyota's flagship Sedan in China looks a lot like a Lexus
Liang Jianzhang: The real universe will certainly prevail over the meta-universe, which may bring population risks and technological stagnation