Facebook changed its name to Meta Meta Pioneer: Eager to catch the heat of the Meta Universe

In the morning of November 2, Beijing time, it was reported that the meta-universe pioneer criticized Facebook's name change, saying that it is not the original Facebook, the latter is a reuse of the increasingly hot concept.

Metaverse became the buzzword in the tech industry this year, as companies and investors embraced it as the next big thing. But in reality, users have been spending time in these fast-growing but little-known virtual worlds for years.

"They just want to build what many of us have been building for years, but when they rename it, it's like it's their thing." American Ryan Kapel says he has organized gatherings in different universes for more than two years. 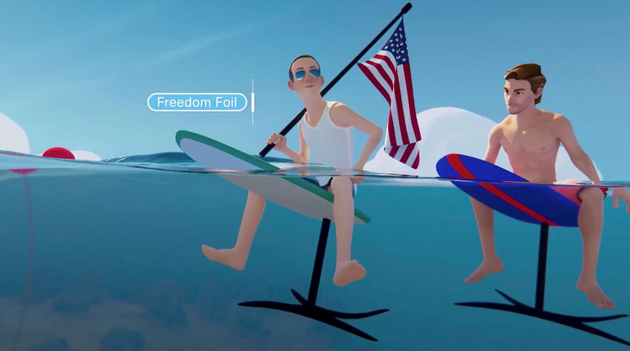 Facebook announced last Thursday that it was changing its name to Meta and detailed its plans to build its own immersive digital world. This comes at a time when many lawmakers and regulators have criticized the company for abusing its market position, algorithmic decisions and policies.

In the virtual world, users can walk around as avatars, chat with friends and play games. Some of these blockchain-based services also allow users to speculate on virtual real estate.

"I think Facebook changed its name early in order to ensure the legitimacy of the new trademark as soon as possible, as more and more brands are interested in it." Pranksy, a British cryptocurrency investor, said he started buying virtual real estate as early as 2020.

Arthur Sychov, who founded Somnium Space in 2017, said Facebook CEO Mark Zuckerberg's name change announcement felt "rushed... I am anxious to insert myself into the meta-cosmic narrative that is happening right now.

Dave Carr, head of communications for virtual worlds Decentraland, said Facebook's move could face resistance from other metaverse users because of concerns about the company's control over content.

Decentraland was founded in 2017 and currently has around 7,000 daily active users. The company sees itself as an alternative to traditional social media platforms and doesn't sell users' data or control what they see.

Many existing metasurverse platforms are based on blockchain technology and therefore cannot be centrally controlled. Blockchain is a distributed ledger architecture commonly used in cryptocurrencies. In these virtual worlds, people use cryptocurrencies to buy land and other digital goods in the form of non-homogeneous tokens (NFT).

But metaverse pioneers aren't entirely negative about Facebook's name change. Some argue that Facebook's entry will increase interest in the concept of virtual worlds, attract more users, and support the development of many virtual worlds.

Tristan Littlefield, co-founder of NFT42, a metasuniverse user since 2018, also had a negative first reaction to Facebook's name change decision because he didn't like how the company was selling user data.

But he also believes that "when you have a giant like Facebook coming in and spending huge amounts of money... It's really a good thing, "because it attracts new people to the industry.

Related news
Do you fully bet "Yuan Universe"? Facebook announces the name "Meta"
Facebook closed up 2.1% on its first day of trading as Meta
Facebook changed its name to Meta Meta Pioneer: Eager to catch the heat of the Meta Universe
Meta Company slams Facebook to change the name in the open letter
Investor: Facebook could go the way of Google by changing its name to Meta
Facebook spent $60 million on Meta trademark assets
The first smart glasses that wear glasses will return to Meeta's first smart glasses.
Yahoo Finance's Worst Company of 2021: Meta Wins "Laurel"
The head of communications at Facebook's parent company, Meta, left the company
Hot news this week
Zhao Lijian responded to the British "blocking" Huawei: generalizing the concept of national security harms others and harms themselves
Zhao lijian said the UK's decision to block Huawei under PRESSURE from the US was damaging others and not benefiting itself
ByteDance invested in Sequencing Technology, which is an AI industrial SaaS software service provider
It's hard to escape the monopoly sanctions American court dismissed Facebook against FTC counterattack
Former search president of Baidu xiang Hailong joins Transsion The company that sells mobile phones wants to do more Internet
Involving the "three crimes" such as the misappropriation of loan funds, the Shaoxing branch of Guangfa Bank was fined 1.1 million yuan
Foxconn announced that it had resumed production in India: only 120 workers had been brought back to work for the first batch
AsiaInfo Technology Announces Acquisition of iResearch Consulting to continue to increase digital operations and digital and intelligent transformation
30-year veteran Gregory Bryant says goodbye to Intel
Huawei petal search engine domestic online! Refreshing ad-free alternative to Google
The most popular news this week
Behind Microsoft's acquisition of Blizzard: Intended to build a super game carrier, SONY is the most hurt
Exposure! The US government has asked WhatsApp to track the information of seven Chinese users
Huawei's application for petal search trademark was rejected
Airlines cancel US flights: Reason for frustration
The pinnacle of Xiaomi industrial design! Xiaomi god machine price reduction: from 2499 yuan
Scissor doors, lifting lidar! Baidu car under the blood cost of the concept car details were first exposed
Premium 45.3% Microsoft Guarantened 68.7 billion US dollars to acquire moving flights PK Faces compete for content production faucet
Phil Spencer, CEO of Microsoft's Gaming Business: Welcome to Activision Blizzard to the Microsoft gaming family
Microsoft announces acquisition of Activision Blizzard on hot search! Netizens sighed: 400 billion cash transactions
Half a billion! Pay treasure collect five blessing to come: exceed 50 thousand people collect qi have you