Investor: Facebook could go the way of Google by changing its name to Meta 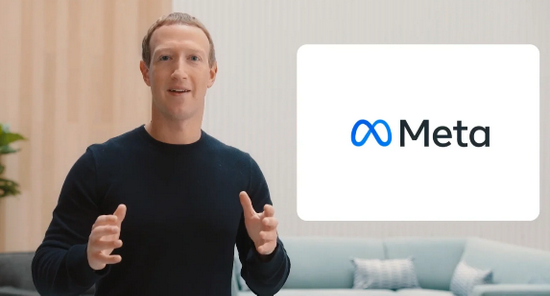 Facebook, which recently renamed itself Meta, plans to bet heavily on metasverse technology. However, Facebook's move could go the way of Google's rebranding as Alphabet.

According to Meta, the company's name change is to reflect the next goal, which is to pioneer the meta-universe industry and make it the successor to the current generation of Internet. Mark Zuckerberg, CEO of Meta, also said that since the company offers so many apps, it doesn't make sense to name the entire company after just one of them, Facebook.

If the move sounds familiar, it's because Google made a similar organizational change in 2015, hoping to make its businesses run more efficiently.

When Alphabet was founded, the company tried to keep Google entirely separate from the "other businesses" dedicated to the technology of the future. The latter include Waymo's autonomous driving business and Loon, which hopes to revolutionize the broadband communications market with solar-powered hot-air balloon technology.

But six years later, Google has been slow to push these moonshots. While some businesses looked promising, others were reintegrated into Google at huge losses, spun off as separate entities or even shut down altogether.

Whitney Tilson, CEO of Empire Financial Research and a former hedge fund manager, said Meta is planning to invest billions of dollars in the meta-universe over the next few years, and "we're going to see history repeat itself."

Mr Tilson thinks Google's main problem is trying to build an overall framework through Alphabet. But in reality, the company should have broken up ambitious projects, not kept them within the parent company. Alphabet is simply feeding these companies with lots of money and cutting them off from the market.

"Because these companies have unlimited access to capital with almost no oversight, they can't achieve as much as independent companies with their own boards," he says. "Companies in the latter category need to consistently demonstrate their achievements in order to receive investment from the market."

For example, Makani, Alphabet's electric kite project, could have used a more sustainable wind energy source, but in early 2020 Alphabet announced it was shutting it down because "the company's path to commercial competitiveness was much longer and riskier than anticipated."

Loon was also shut down earlier this year. In addition, self-driving car company Waymo recently lost its CEO, CFO, and other top managers, and sources say insiders are frustrated with the company's slow progress in expanding its business.

Other projects are moving from Alphabet's "other businesses" back to Google. Jigsaw, a tech incubator dedicated to tackling misinformation and other Internet problems, returned to Google in early 2020. Nest, a smart home project, and Chronicle, an information security company, made the same choice in 2018 and 2019, respectively.

Alphabet is spending a lot of money on these moonshots. Since Google changed its name, these "other businesses" have consumed $3.2 billion in capital investment and resulted in an operating loss of $24.3 billion, according to a media report in May. DeepMind, Alphabet's ARTIFICIAL intelligence company, reported a loss of $649 million in 2019 alone, mostly due to staffing costs and other items.

Investors shrugged off the losses. Since the name change, Alphabet's market value has soared. Since 2015, Alphabet's share price has doubled that of the S&P 500 over the same period.

Tilson said that no matter how the Metasverse project turns out, Meta will have a similar outcome because both companies' core business is digital advertising, and they have strong positions in that market.

Zuckerberg and other company leaders have acknowledged that it will be years before the metasverse actually comes to fruition. At least 10 years, to be precise.

However, Tilson argues that Meta should have chosen to do what Google should have done but didn't: focus on successful businesses and take care of the major problems associated with them, "rather than waste $1 billion a year on the metasverse."

Related news
Do you fully bet "Yuan Universe"? Facebook announces the name "Meta"
Facebook's announcement that it is changing its name to "Meta" underscores the company's determination to bet all the money on the meta-universe
Facebook closed up 2.1% on its first day of trading as Meta
WhatsApp Update Start Page Brand Image: Delete "Facebook" Change to "From Meta"
Meta Company slams Facebook to change the name in the open letter
Investor: Facebook could go the way of Google by changing its name to Meta
Facebook spent $60 million on Meta trademark assets
Yahoo Finance's Worst Company of 2021: Meta Wins "Laurel"
The head of communications at Facebook's parent company, Meta, left the company
Heading into the metasemes, the Facebook Oculus was renamed Meta Quest
Hot news this week
Young people can't change their mobile phones one brother pressure in the channel inventory up to 50 million
Chinese mysterious female rich 560 million buy European luxury homes: the full amount of cash is paid at a time
Criminal gang candid courier list takes the money 8 people to be arrested
Do you make feed after Yi Lord? Zhenghong Technology M & A has mystery
Internal personnel have caused players to contradict? Netease "Yin Yang Shi": Impossible!
The first pop -up shop in the United States opened, Bubble Mart opened the North American expansion plan
The goose factory is finally making a move on the metasverse?
Big news! The police report henan village banks can not withdraw cash case, has captured a number of suspects
With this charging treasure that can legal "stealing electricity", I don’t worry about the mobile phone out of power
Tesla has lost nearly $600 million after the richest Chinese lost 89% of his net worth in the bitcoin crash
The most popular news this week
Avita and Huawei reached a comprehensive cooperation agreement will create a series of smart car products
Samsung S22 Ultra is new, the limited series is coming, will you buy about 9300 yuan?
2022 Chongqing Auto Show: Jointly with Huawei, Avita 11 solid car officially launched | front -line car news
Huawei's mid-range phone Nova Y90 has been released overseas and will soon be available in China
The new MacBook Pro 13 -inch is now available at the Apple Store retail store
The largest professional wholesale market was granted an Internet payment license, and 449 million yuan became the actual controller of Fastlink
Huawei's Nova 10 Pro appears on Geekbench powered by Qualcomm Snapdragon 778G 4G
Apple updates the subscription management interface on the iPhone: the larger distance display is more detailed
Apple says its employees have reproductive health benefits but has been asked by lawmakers to investigate
The iOS 16 upgrade is no longer supported on the iPhone 6s