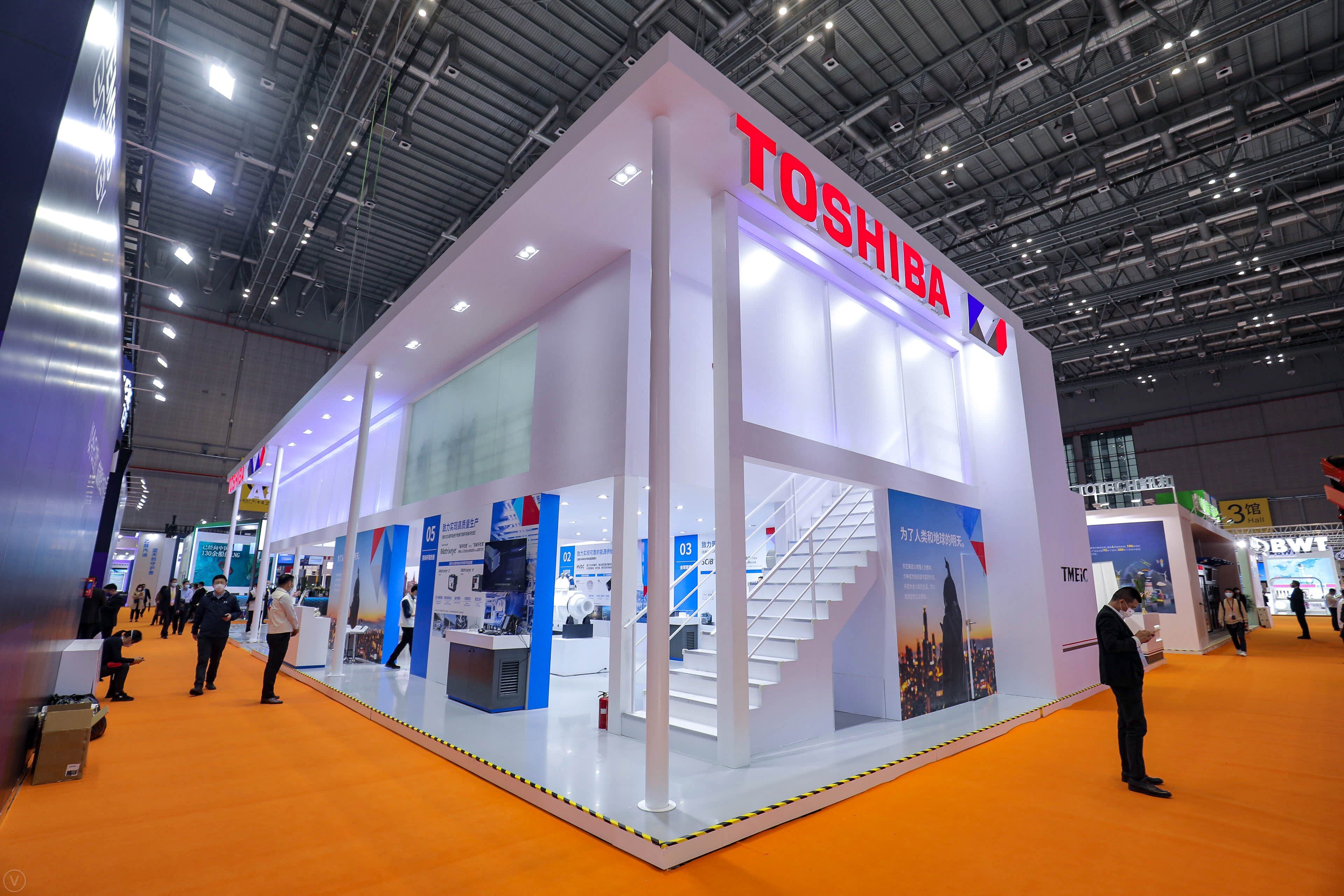 Toshiba 2021 into the Expo booth

In this and many other exhibits, "carbon neutral", "low power" has become the core keywords.

Among them, the pneumonal fuel cell system can efficiently convert hydrogen into energy and thermal energy, with electricity efficiency at 50-55%, the design service life is 800,000 hours, and under normal circumstances, it can be used for approximately ten years.

A prominent application scenario hydrogen is bound to the application of renewable energy. However, the current pure hydrogen fuel cell system has not yet landed in China. In this regard, Miyazaki Ocean Toshiba (China) Co., Ltd., chairman and president optimistic, he believes, although hydrogen is not popular in China, but the Chinese market is still very large demand for hydrogen promising, Toshiba now called the Mount of hydrogen technology with China a methanol reforming enterprises, has cooperated fuel cell technology, will be available in 2022 planned 300 fuel cell system.

In addition, since the hydrogen energy industry chain is very long, it contains hydrogen production, hydrogen storage, hydrogen and many other areas, in the Toshiba stage for "hydrogen", Chinese enterprises work together to develop hydrogen energy market, plans to have flows with China top.

Miyazaki titanium foreign media summary App pair in terms of carbon and hydrogen and semiconductor business, Toshiba is a positive direction to push in China, they are very critical role to peak for carbon, carbon-neutral and can play, Toshiba will continue to force in both directions, fit a double carbon commitment to the Chinese government.

Toshiba did not withdraw from China

"We closed the Dalian plant is built 30 years ago, the place was still all factory, after 30 years of development, alongside all turned into a residential environment has undergone great changes. In addition, 30 years later , China has undergone enormous changes in the past, products have been completed its historic mission, and no new products fit in there production plant is relatively aging, so after more careful consideration, decided to close the Toshiba factory in Dalian. "

Miyazaki Yoichi also mentioned earlier in Hangzhou renovation reconstruction of an air-conditioning plant, the new factory is located in the original factory a few kilometers, the reason for this choice, the one old plant capacity has been unable to meet the Chinese market demand, orders exceed production line load, the new plant expansion is to meet the market needs; secondly, to select a new address located in the vicinity of the old factory, but also to be able to have a match with the original supply chain on the line, quickly put into production.

Yoichi Miyazaki said that as a foreign company, but also more willing to see China provide a good business environment, such as tax preferential policies, stability and integrity of the supply chain infrastructure support, power, transportation, water and so on and so on.

Business transfer to to B

80s first entered China during that time, Toshiba to white goods occupy the Chinese market. But with the rise of the adjustment as well as Toshiba's entire business structure of China's domestic home appliance brands, Toshiba gradually fade out to the field C, gradually reducing product for individual users, and concentrate on developing the business and infrastructure and energy.

Yoichi Miyazaki, according to reports, this strategic shift of companies, not just Toshiba's unique, currently some large Japanese companies like Hitachi, Mitsubishi Electric, GM and the United States, Europe, Philips and so there ever experienced business restructuring.

"Toshiba is the 1875 establishment of a fast almost 150-year history of the company, founded in 1875, when production of the product, in fact, no one is still to sell, we are with the progress of this era of constantly making adjustments . "Yoichi Miyazaki added.

For the future there will be adjustments and innovations in the general direction of which, Yoichi Miyazaki said Toshiba a long historical background makes itself has been relatively deep technical precipitation, every innovation not necessarily the "innovation", probably in the original some basis, stepping past experience, continue to follow the development of the times the experience obtained, coupled with flexible reorganization.

"This is actually a direction, so our Toshiba has accumulated a lot of technology, success, technology and experience. I didn't say that I pushed him this wall, but I said that our wall After building, we continue to grow on this basis. "Miyazaki said.(This article first titanium Media App Author | Qincong Hui)

Related news
Toshiba (China) Yoichi Miyazaki: Focus carbon neutral, embracing Toshiba business to B
Hot news this week
Zhao Lijian responded to the British "blocking" Huawei: generalizing the concept of national security harms others and harms themselves
Zhao lijian said the UK's decision to block Huawei under PRESSURE from the US was damaging others and not benefiting itself
ByteDance invested in Sequencing Technology, which is an AI industrial SaaS software service provider
It's hard to escape the monopoly sanctions American court dismissed Facebook against FTC counterattack
Former search president of Baidu xiang Hailong joins Transsion The company that sells mobile phones wants to do more Internet
Involving the "three crimes" such as the misappropriation of loan funds, the Shaoxing branch of Guangfa Bank was fined 1.1 million yuan
Foxconn announced that it had resumed production in India: only 120 workers had been brought back to work for the first batch
AsiaInfo Technology Announces Acquisition of iResearch Consulting to continue to increase digital operations and digital and intelligent transformation
30-year veteran Gregory Bryant says goodbye to Intel
After the suspension storm, Amazon's Chinese sellers increased by double digits, and sales exceeded $50 million.
The most popular news this week
Airlines cancel US flights: Reason for frustration
The pinnacle of Xiaomi industrial design! Xiaomi god machine price reduction: from 2499 yuan
Scissor doors, lifting lidar! Baidu car under the blood cost of the concept car details were first exposed
Premium 45.3% Microsoft Guarantened 68.7 billion US dollars to acquire moving flights PK Faces compete for content production faucet
Phil Spencer, CEO of Microsoft's Gaming Business: Welcome to Activision Blizzard to the Microsoft gaming family
Microsoft announces acquisition of Activision Blizzard on hot search! Netizens sighed: 400 billion cash transactions
Half a billion! Pay treasure collect five blessing to come: exceed 50 thousand people collect qi have you
Snapdragon 888 Plus Is the King of Sex! The best selling mobile phones at the 2000 price point were announced
Microsoft 68.7 billion US dollars acquired moving Blizzard: will become the third big game company in the world!
Apple releases AirPods 3 firmware: Version 4C170