The U.S. Department of Commerce said TSMC and other enterprises voluntarily handed in key data on schedule, Taiwan netizens angry: shameless to the extreme

8 (UPI) -- The U.S. is setting a deadline to extort confidential data from chip-related companies in response to the global chip crisis. The day before, TSMC confirmed that it had "responded" to the US request to hand over the data. U.S. Commerce Secretary Raymondo said Wednesday that she is confident that supply chain companies such as semiconductor chipmakers will "voluntarily hand over key data to the Commerce Department" by the deadline, Taiwan's Central News Agency reported. For the U.S. Department of Commerce this so-called "voluntary" statement, there are island netizens message retorted, "Laughing dead, (chip merchants) voluntarily hand over customer information to the U.S. Department of Commerce?" And directly denounced the U.S. side "to say such words is disgusting, shameless to the extreme!" ”

In an interview with Reuters, Raimondo reportedly said she had called "the CEOs of all supply chain companies, including TSMC, Samsung and SK Helix... All of these CEOs promised me that they would deliver a robust and complete stream of data to us." "So far, they've been very cooperative." 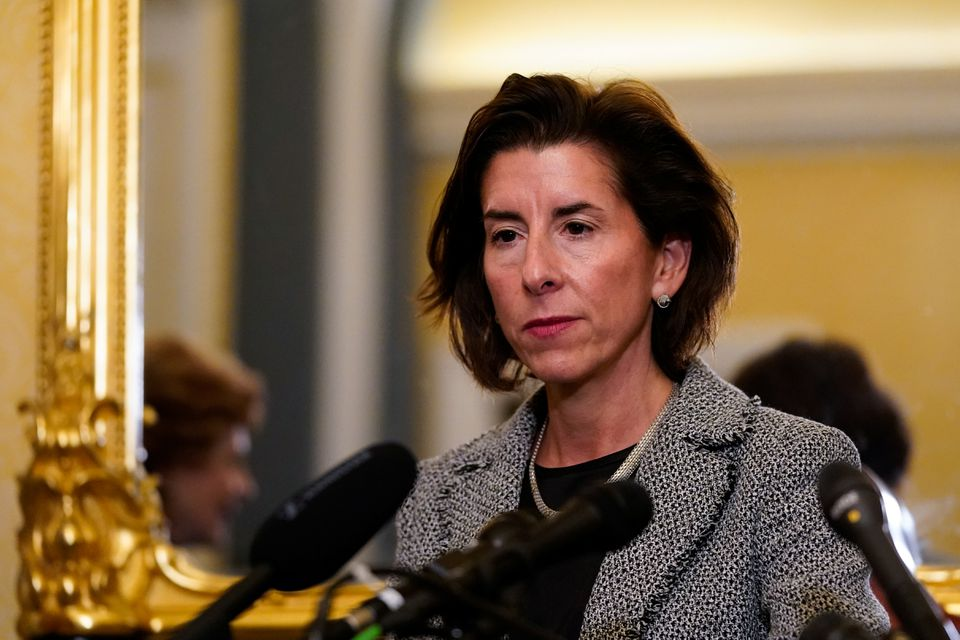 The U.S. Department of Commerce this statement, in the island naturally caused a lot of Internet users disgust, some people scolded the U.S. side "is basically bandit bandits", "super don't face", and some people criticized said "say such words is really disgusting, shameless to the extreme!" ” 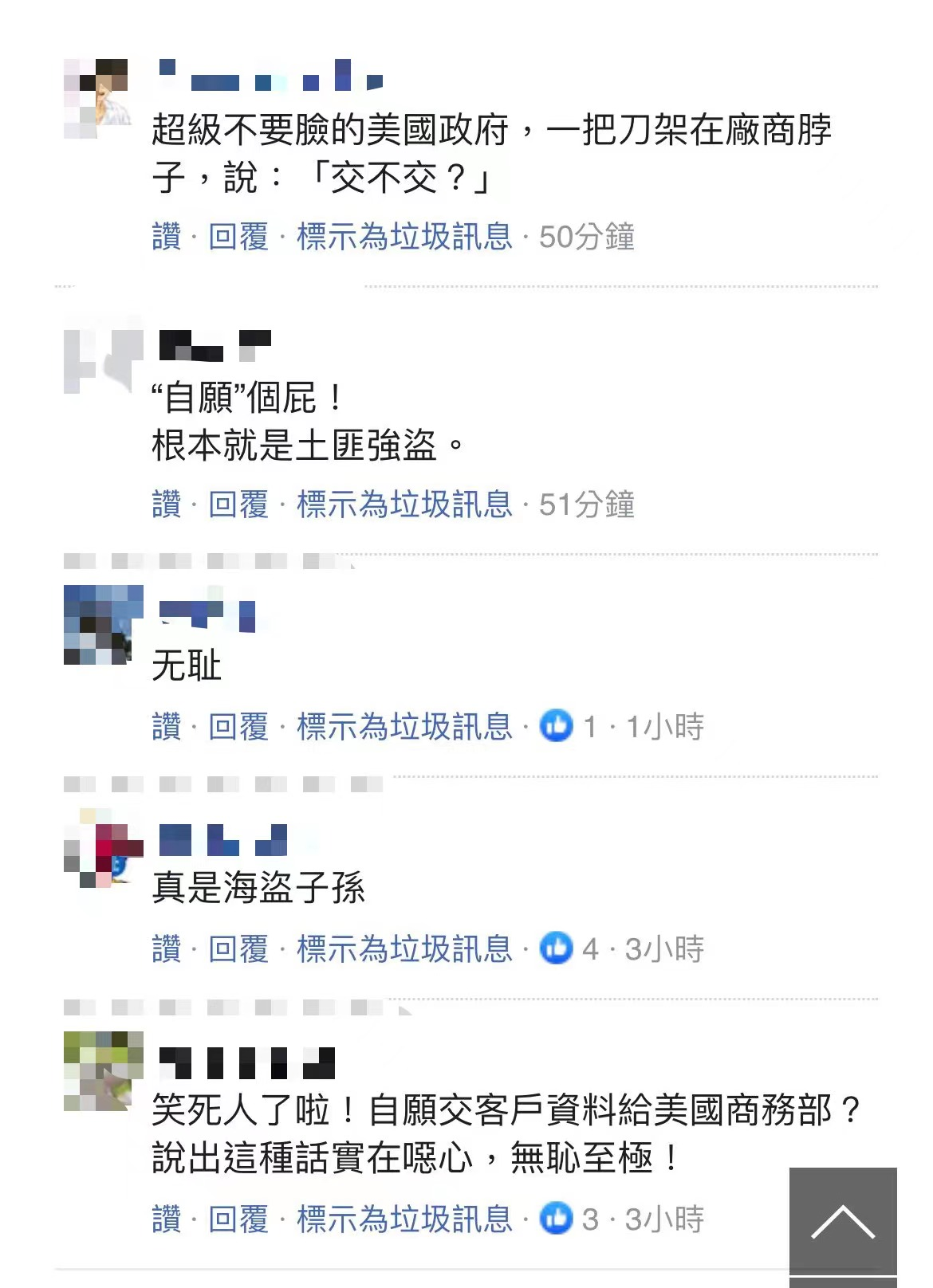 According to Taiwan's Economic Daily reported on the 8th, on the U.S. open access to semiconductor supply chain information, the U.S. Federal Gazette and related website information shows that as of the 7th, 23 major international factories and institutions have completed the reply. Among Taiwanese manufacturers, including TSMC, United Power, Sun Moonlight, Global Crystal and other indicators of enterprises have been "turned over." In the public comments section, most of these manufacturers fill out the U.S. form, and retain the blank part for the U.S. side to refer to the "confidential documents", in which TSMC 5 U.S. time to deliver three files, including a public form and two non-public files with trade secrets. Taiwan's "Economic Minister" Wang Meihua said on the 8th, master to Taiwan manufacturers will "turn over the paper", as to whether the information manufacturers to provide include sensitive data, "the government will not interfere, nor is it suitable to understand the content."

Although Ms Wong has repeatedly claimed that the submission of information by Taiwanese enterprises to the United States is "voluntary", the administration's comments have caused considerable dissatisfaction among public opinion on the island. Zhu Liheng, Taiwan's "home god", was unceremoniously angry, calling the DPP authorities "softer than soft-footed shrimp". Some netizens left a message sarcastically saying that the authorities wanted to say TSMC was the "Shenshan" of the guard station, and that they had pretended not to see it when they were targeted by the United States. Another hostage asked: "'Shenshan' was bullied, the DPP did not say anything?" Don't forget to tax every year, 40% comes from TSMC. ”

Global Times reporters observed that in Europe, there are few reports of U.S. chip companies forcing chip companies to submit business information, let alone the official attitude of related companies such as Infineon in Germany and European governments. Industry sources told reporters that the official statement is due to security issues, Europe and the United States are allies, and the United States said is to "solve the chip crisis", "the most important reason is afraid of U.S. retaliation."

Related news
Trump said U.S. companies could continue to supply Huawei Huawei official push: U-turn?
The linely group's best mobile processor of the year: God u Kirin 810 wins the title
The new king! ASUS Rog maximum XII extreme
The U.S. Department of Commerce said TSMC and other enterprises voluntarily handed in key data on schedule, Taiwan netizens angry: shameless to the extreme
Hot news this week
Capital does not love SAIC, "flying" subsidiary, Jet Hydrogen Technology intends to go to science and technology board
Study on the sequelae of COVID-19 in the Chinese team: Shortness of breath, depression and other problems still existed nearly one year after discharge
Wechat: It will not be possible to create an account for controlling comments and Revelations related to star artists
Tencent responded to "APP to get ridiculous": Upgrade APP is now downloaded for user rights protection
WeChat Alipay personal collection code will not be used for business collection, digital currency sector rises
Big bang! Wechat, Alipay personal payment code can not be used for business payment, what is the impact on you?
Netease Cloud Music will soon be listed on the back of 200 million monthly live users how to make money
The Ministry of Industry and Information Technology has taken transitional administrative guidance measures against Tencent
1.6 billion yuan too cheap? BMW's $1.6 billion takeover of Brilliance's Factory in China has been called off
Interpretation of the more than Q3 financial results: dead agriculture shrink self-employment, transformed into "more farmers"? | the planet of wealth
The most popular news this week
Huawei's new 4G Hongmeng mobile phone has been certified with a maximum 40W fast charge
Can Apple bring iphones back from China and assemble them locally? Harvard Professor: Not a chance
Ren Zheng did not ask the hi Malayashan Huawei Hai Xi continued to expand: 2022 chip recruitment
State order: crack down on vulgar, violent online language
Ren Zhengfei asked to climb the Himalayas Huawei Hayes is not dead: 2022 continues to expand
The OLED of the jade is originally: 6999 yuan
Spain "Uprising News": Chip and Biden's obsession on China
TSMC Samsung and more than 150 other semiconductor companies submit chip confidential data U.S. statement: Very satisfied
In violation of prudential rules, a Bank of Beijing Shanghai branch was fined 500,000 and two of those responsible were banned from business
The third quarter of the third quarter was 0.2% year-on-year.