It is also forced to donate and is rich tax! Mask hints will also sell more Tesla stocks

Sanders wrote on Weekly: "We must ask those most popular people to pay taxes." According to US law, Mask needs to pay taxes.

Masque responded to this 80-year-old senator's push to say, "I have been forgot to live alive." In the subsequent Twitter, Mask chased again: "Bernie, want me to sell more stocks? Didn't say it ..." 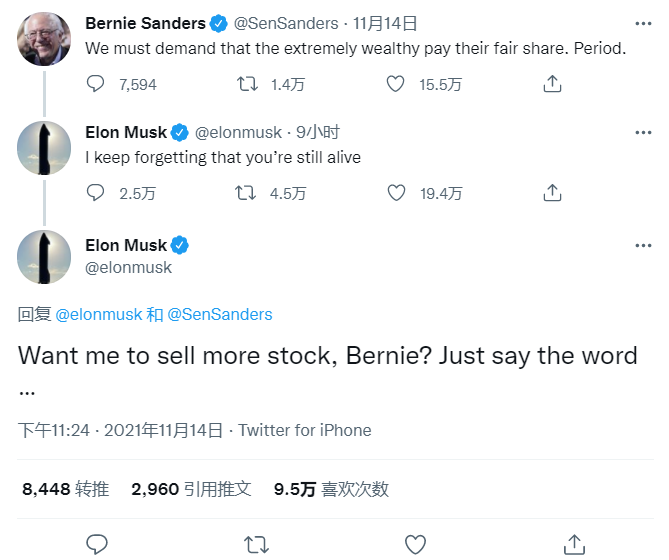 In the past week, Masque sold Tesla stock worth nearly $ 7 billion, and promoted the company's share price a week of approximately 15%.

Masque also has millions of Tesla stocks, must exercise before the expiration of June 2022. He said in September that he may exercise "a lot" option before the end of 2021.

Billionaires can benefit from tax avoidance strategies, and those who revenue from traditional wages cannot be. Habulous wealth is usually largely from the value of stocks and real estate, unless they are sold, otherwise it will not be considered to be taxable assets.

The small house is more feeling

In October This year, Masque said that Tesla will move headquarters from California to Austin. Mask said on Saturday, in the past two years, he has lived in a small house in southern Texas, "lives in a small house". " 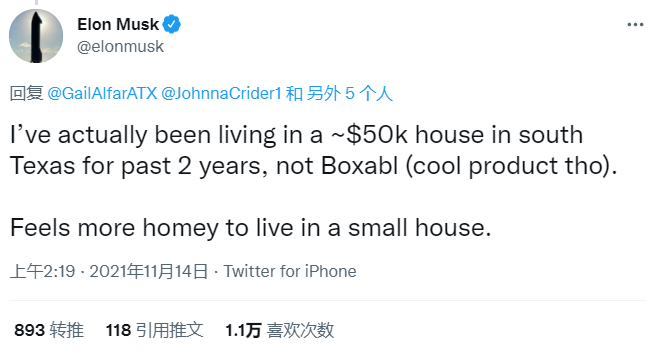 Mask is the largest shareholder of Tesla. He launched a poll on November 6, asked 62.5 million fans to sell 10% Tesla stock. "There are many people recently believe that not achieving benefits is a tax avoidance tool, so I recommend selling 10% Tesla stock. Do you support this proposal?" He said. He sold 6.36 million shares last week, accounting for 37% of 1,7 million shares. He now needs to sell approximately $ 10 million, in order to honor 10% commitment.

This sale is the first large-scale sale since Mask since its establishment in Temla in 2003. If the capital market is measured, the scale of its sale is large, and the scale of the first public offerings of most companies.

Tesla stocks fell 2.8% last Friday to $ 1033.42, ended the upward trend of 11 consecutive weeks. The share price dropped to the company's market value last week lost about $ 187 billion, the scale of the 50,000-market value of the Ford Automobile and General Motors.

Related news
NVIDIA Tesla v100s low-key release: full speed up to turn into Tu Haojin
13 years of history NVIDIA gave up Tesla brand in a low-key way: name collision with electric vehicles
NVIDIA gives up Tesla brand in a low-key way: because of its name collision with famous electric vehicles
Hot news this week
Capital does not love SAIC, "flying" subsidiary, Jet Hydrogen Technology intends to go to science and technology board
Study on the sequelae of COVID-19 in the Chinese team: Shortness of breath, depression and other problems still existed nearly one year after discharge
Wechat: It will not be possible to create an account for controlling comments and Revelations related to star artists
Tencent responded to "APP to get ridiculous": Upgrade APP is now downloaded for user rights protection
WeChat Alipay personal collection code will not be used for business collection, digital currency sector rises
Big bang! Wechat, Alipay personal payment code can not be used for business payment, what is the impact on you?
Netease Cloud Music will soon be listed on the back of 200 million monthly live users how to make money
The Ministry of Industry and Information Technology has taken transitional administrative guidance measures against Tencent
1.6 billion yuan too cheap? BMW's $1.6 billion takeover of Brilliance's Factory in China has been called off
Interpretation of the more than Q3 financial results: dead agriculture shrink self-employment, transformed into "more farmers"? | the planet of wealth
The most popular news this week
Huawei's new 4G Hongmeng mobile phone has been certified with a maximum 40W fast charge
Can Apple bring iphones back from China and assemble them locally? Harvard Professor: Not a chance
Ren Zheng did not ask the hi Malayashan Huawei Hai Xi continued to expand: 2022 chip recruitment
State order: crack down on vulgar, violent online language
Ren Zhengfei asked to climb the Himalayas Huawei Hayes is not dead: 2022 continues to expand
The OLED of the jade is originally: 6999 yuan
Spain "Uprising News": Chip and Biden's obsession on China
TSMC Samsung and more than 150 other semiconductor companies submit chip confidential data U.S. statement: Very satisfied
In violation of prudential rules, a Bank of Beijing Shanghai branch was fined 500,000 and two of those responsible were banned from business
The third quarter of the third quarter was 0.2% year-on-year.