HHLR Advisors held shares in 83 companies in the U.S. stock market at the end of the third quarter, with a market capitalization of $7,646 million, according to the data. Among them, China General Stock, Biotechnology, Innovation Economy and Technology are still the main investment lines of the secondary market team.

It is worth noting that the HHLR Advisors secondary market team in the third quarter continued to reduce positions related to the Internet online platform stocks, such as clearing the drop, large-scale reduction of the amount of money, beeping miles. At the same time, there are some new faces in the top 10 heavyweight stocks of the U.S. stock market.

Data from 13F in the third quarter of 2021 show that the secondary market team continued to increase its investment in China's shares in the second quarter, holding a total of 83 companies. Among them, biotechnology, cloud computing and new energy and other technology-based enterprises more than 60, from the market value of holdings, the majority of shares still occupy the main position.

From its top ten heavy stock list can be seen, including Baiji Shenzhou, Dodo, Aichiyi, Tiantian Biology, JD.co., including the chinese stocks, still occupy the main positions of the secondary market team. 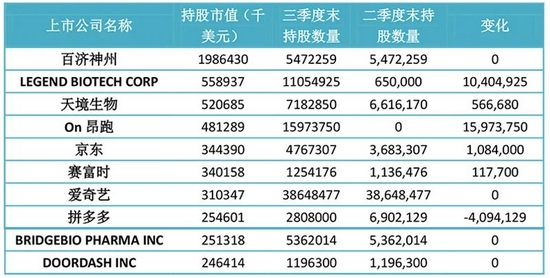 Notably, a new face emerged in the top 10 heavyweight stocks at the end of the third quarter, On On Run, which was listed as a new stock holder in the third quarter of HHLR Advisors, with 15.974 million shares and a market capitalization of $480 million.

Public records show that On On Run is a swiss sports brand, founded in 2010, known as "U.S. stock Li Ning." On September 15 this year, Onon Ran landed on the New York Stock Exchange, closing up 45.83 per cent on its first day of trading. Prior to the listing, on-on-run Shareholders with more than 5 per cent of China's shares included HH OAG Holdings HK Limited, part of China's Gaoxuan Capital, according to the prospectus. After the listing, OnAng Ran said it wanted to work in the Chinese market, which is the fastest growing market. In 2020, OnAng's net sales in China were 5.5 million Swiss francs (about 39 million yuan), up 199% year-on-year.

Interestingly, Gao's previous layout of domestic sports brands has also been made. In June this year, Teep International announced that on June 15, 2021, the company was awarded a HK$500 million convertible bond. At the same time, the Group has established a strategic partnership with Teeb global investment Co., Ltd., which owns and owns the "Gestapo" and "Paladin" operations. 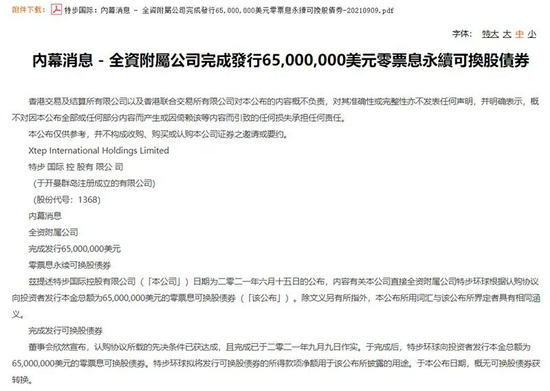 Increase investment in science and technology

In addition to the high-profile layout of sports brands, HHLR Advisors also increased its investment in the technology sector in the third quarter.

Previously, Gao said publicly that the next two to five years in the field of semiconductors, cutting-edge technology, new energy and intelligent hardware four sub-tracks, and hard technology as a "historic period of structural investment." According to statistics, since this year, gao's participation in the A-share research in the field of electrical equipment, semiconductor equipment, electronic components and other hard technology related listed companies increased to 43, accounting for nearly 40%.

In the primary market, Gao also concentrated in the field of science and technology "firepower". More than 80% of the 200 projects invested in the first year of the venture, which was set up last year, are concentrated in the two major areas of technology and healthcare. In the first half of this year, Gao Xuan invested in 80 hard science and technology projects, including a number of state-level specialized specialty new enterprises. According to gao's statistics, in the third quarter of this year, gao's first-level team continued to sell in advanced manufacturing, industrial Internet, industrial software and other hard technology-related track layout, investment in more than 30 related enterprises.

From the action to reduce positions, continue the first half of the thinking, Gao Xuan in the third quarter of this year continued to reduce some of the Internet online platform companies.

Judging from the stock price performance, this year a number of Internet online platform target correction is obvious. Industry analysts said that HHLR Advisors' position reduction operation is mainly due to two reasons: First, more and more stars in the Hong Kong stock market secondary listing, which for professional investment institutions to adjust their positions, in the Hong Kong stock market to continue to restock Chinese outstanding enterprises to provide more flexible space;

Related news
Google's new model breaks through the limitations of Bert: big bird, a new member of Sesame Street in NLP
Amd big Navi graphics card exposure: performance up to RTX 3080, too much cheaper
Apple's windows migration assistant updated to MacOS Big Sur
MacOS Big Sur 11.2 fixes bugs in Bluetooth, external display and icloud drive
I NEED A REAL LOTTERY SPELL CASTER TO HELP ME WIN BIG
HOW I WON BIG
Hot news this week
Capital does not love SAIC, "flying" subsidiary, Jet Hydrogen Technology intends to go to science and technology board
Study on the sequelae of COVID-19 in the Chinese team: Shortness of breath, depression and other problems still existed nearly one year after discharge
Wechat: It will not be possible to create an account for controlling comments and Revelations related to star artists
Tencent responded to "APP to get ridiculous": Upgrade APP is now downloaded for user rights protection
WeChat Alipay personal collection code will not be used for business collection, digital currency sector rises
Big bang! Wechat, Alipay personal payment code can not be used for business payment, what is the impact on you?
Netease Cloud Music will soon be listed on the back of 200 million monthly live users how to make money
The Ministry of Industry and Information Technology has taken transitional administrative guidance measures against Tencent
1.6 billion yuan too cheap? BMW's $1.6 billion takeover of Brilliance's Factory in China has been called off
Interpretation of the more than Q3 financial results: dead agriculture shrink self-employment, transformed into "more farmers"? | the planet of wealth
The most popular news this week
State order: crack down on vulgar, violent online language
Ren Zhengfei asked to climb the Himalayas Huawei Hayes is not dead: 2022 continues to expand
The OLED of the jade is originally: 6999 yuan
Spain "Uprising News": Chip and Biden's obsession on China
TSMC Samsung and more than 150 other semiconductor companies submit chip confidential data U.S. statement: Very satisfied
In violation of prudential rules, a Bank of Beijing Shanghai branch was fined 500,000 and two of those responsible were banned from business
The third quarter of the third quarter was 0.2% year-on-year.
What is the top of the new CEO?
Century Huatong: Subsidiary Meeting Games and Tencent Signing Intermodal Cooperation Framework Agreement
Rumours of Samsung's acquisition of idM, the car company, have resurved