Why do outsourcing MCN agencies cheat creators? Whose pocket does the creator's swindled money end up in? Apart from penguin, does this outsourcing malfeasance still exist in other business departments of Tencent Group? Perhaps these are more important "nest" crises than the resources of creators.

It's hard to imagine turning on bilibili (" B "for short), the cheerful two-dimensional atmosphere platform, and seeing many videos of Up users crying and complaining about their grievances, the protagonist of which is Penguin, a one-stop content creation and operation platform owned by Tencent Group.

The incident was first sparked by a video posted on the B website by Up host Minty, who is featured in the video about being "tricked" by MCN, an organization cooperating with Penguin.

A brief overview of the event is that all major video creators, including B station, were attracted by the Dawn project of Tencent Penguin to sign the agreement. Tencent Penguin outsourced MCN organization to operate this matter and offered 2000 yuan of entry fee, but MCN organization cut across the board and directly drew 1800 yuan and only gave Up 200 yuan to Up owner to purchase the copyright. It also said that the creator only needs to provide copyright authorization and no complicated operation is required.

However, after some operation, MCN organization took the UID information (User Identification) of the main core of Up and privately applied the creator's account on the enterprise account as an exclusive one. Then, it complained that the content of other video platforms including B was pirated, and even continued to appeal to the other party's account closure.

Many realize the pit Up main emergency cancellation for penguins, penguins, cancellation of bank account need through WeChat face recognition, recognition only twice in 24 hours continuous failure led to many people anxious mood, B station ID for "I am a little monster" Up the core main crying is not defraud of 200 yuan, but being deceived this matter made her grievance. In the video, she revealed that the MCN organization she cooperated with was Chuangyu Media, a subsidiary of Listening Sea Culture.

Another creator said helplessly in the complaint video on website B: "This is really a conscientious MCN paying 200 yuan for all the copyright of your videos, and the heartless MCN directly 'whopper' all your videos, and even the final profit depends on the other side's face."

As public opinion continues to grow, Tencent posted an apology for the termination of Project Dawn on its official account Tencent Content Open Platform on November 17, saying: "Recently, we have received a lot of feedback and criticism from Online users about Project Dawn. We accept all criticism and apologize to the creators."

According to Penguin, the original intention of "Project Dawn" is to encourage MCN organizations to invite creators and help them operate on the premise of creators' authorization, so that creators can make profits on Tencent's various content platforms. However, due to the lax management in the implementation process of the plan and the imperfect design of some products in the plan, many problems were caused, and we decided to terminate the "Dawn Project". Creators who are already registered can log out of Project Dawn if they wish. If you wish to continue to operate your account, penguin will continue to provide services. After completion of the cancellation, the personal information of the creator under the account and all content and works published will be cleared on the platform. At the same time, the income earned by the creators through "Project Dawn" will be directly distributed to the creators' accounts by the platform, and will not go through MCN.

As for the MCN organization in contradiction and the maliciously reported behavior of creators on other platforms by these organizations, Penguin said that the statement that "Penguin uses video content to complain to other platforms about the original, or even hit creators' original external platform accounts" was not true. 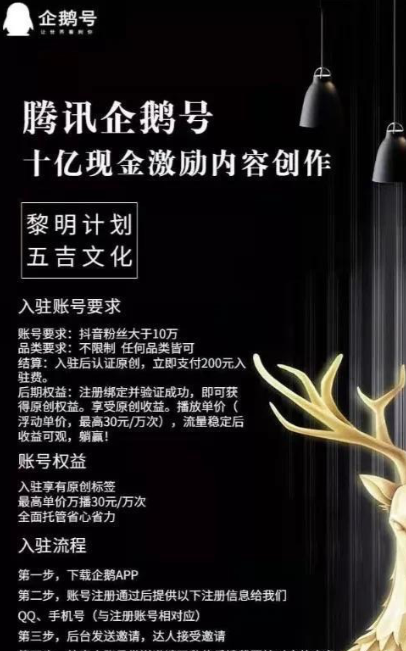 The confusion over Penguin's Project Dawn is a direct reflection of the intense competition among short-form video platforms for quality creators. According to a promotional poster provided by MCN, an organization called Wuji Culture, the requirements for entering Project Dawn, an incentive program launched by Tencent for its penguin brand, are: If the number of douyin fans is more than 100,000, there is no limit on the category of works. After the registration of the original works is verified, the registration fee (creator) will be paid 200 YUAN immediately. The unit price of broadcasting is a floating one, and the maximum income can be 300,000 yuan per 10,000 times of broadcasting.

To this creator jokingly said: float up to 300 thousand yuan, also means the lowest we may only get that 200 yuan. Facts also prove that the rights and interests of these creators are not guaranteed.

According to the creators, enterprise Dawn is not limited to B station, but also includes high-quality creators such as Douyin, Kuaishou and Xiaohongshu. In fact, the competition among video platforms for quality creators has never stopped. In 2020, a group of hihiup owners posted posters in B station announcing their farewell to B station and signing exclusive watermelon videos, claiming that their profits would increase 10-20 times after signing watermelon videos.

"Poachers" disputes directly broke out in June 2020, due to the original B station well-known finance and economics Up master sorcerer finance and economics left, signed a watermelon video, causing B station and sorcerer finance and economics tug of war. Current byte to beat the latest structure adjustment, of course, revealed that the video will be charged to the watermelon trill business lines, visible blindly burning money to woo creators group is not able to "fatal blow" competitive weapon, platform operation, create atmosphere, the first mover advantage, open and transparent reward mechanism etc., are the important factors that affect competition platform.

Moreover, at present, the competition pattern of short video industry has been preliminarily determined. Penguin, which was eliminated from the first round of the series, should reflect on its cost to excavate creators. Why would outsourcing MCN institutions cheat creators? Whose pocket does the creator's swindled money end up in? And by whom are these MCN institutions selected? Apart from penguin, does this outsourcing malfeasance still exist in other business departments of Tencent Group? Perhaps these are more important "nest" crises than the resources of creators.

Related news
China's MCN out to sea: thousands of yuan can sign a million fans of the net red?
Wechat opens MCN to settle in and commercializes the layout
Why do anchorperson and MCN switch to live audio broadcasting?
Baidu e-commerce releases 2021 support plan for service providers to build 1 billion MCN institutions
Tencent terminated "Dawn project" outsourcing MCN caused public anger exposed what management crisis?
Video 丨 Tencent apologize to UP! Termination of the "Dawn Program" project
Spruce China responds to China Fund Partner Cao Wei Established Monolith Management
Hot news this week
Capital does not love SAIC, "flying" subsidiary, Jet Hydrogen Technology intends to go to science and technology board
Study on the sequelae of COVID-19 in the Chinese team: Shortness of breath, depression and other problems still existed nearly one year after discharge
Wechat: It will not be possible to create an account for controlling comments and Revelations related to star artists
Tencent responded to "APP to get ridiculous": Upgrade APP is now downloaded for user rights protection
WeChat Alipay personal collection code will not be used for business collection, digital currency sector rises
Big bang! Wechat, Alipay personal payment code can not be used for business payment, what is the impact on you?
Netease Cloud Music will soon be listed on the back of 200 million monthly live users how to make money
The Ministry of Industry and Information Technology has taken transitional administrative guidance measures against Tencent
1.6 billion yuan too cheap? BMW's $1.6 billion takeover of Brilliance's Factory in China has been called off
Interpretation of the more than Q3 financial results: dead agriculture shrink self-employment, transformed into "more farmers"? | the planet of wealth
The most popular news this week
State order: crack down on vulgar, violent online language
Ren Zhengfei asked to climb the Himalayas Huawei Hayes is not dead: 2022 continues to expand
The OLED of the jade is originally: 6999 yuan
Spain "Uprising News": Chip and Biden's obsession on China
TSMC Samsung and more than 150 other semiconductor companies submit chip confidential data U.S. statement: Very satisfied
In violation of prudential rules, a Bank of Beijing Shanghai branch was fined 500,000 and two of those responsible were banned from business
The third quarter of the third quarter was 0.2% year-on-year.
What is the top of the new CEO?
Century Huatong: Subsidiary Meeting Games and Tencent Signing Intermodal Cooperation Framework Agreement
Rumours of Samsung's acquisition of idM, the car company, have resurved